Hi there everyone, Liz here again with a project based on the topic of Niches. To me a niche is a small space to put treasures into and I love creating this sort of project. However this time I decided to do something slightly different and use the project to show off some of the faces from my stamps and create some ‘fantasy ‘ flowers. I was inspired by the fact that the magnolias are blooming at the present and I love these flowers because of their amazing sculptural shapes. 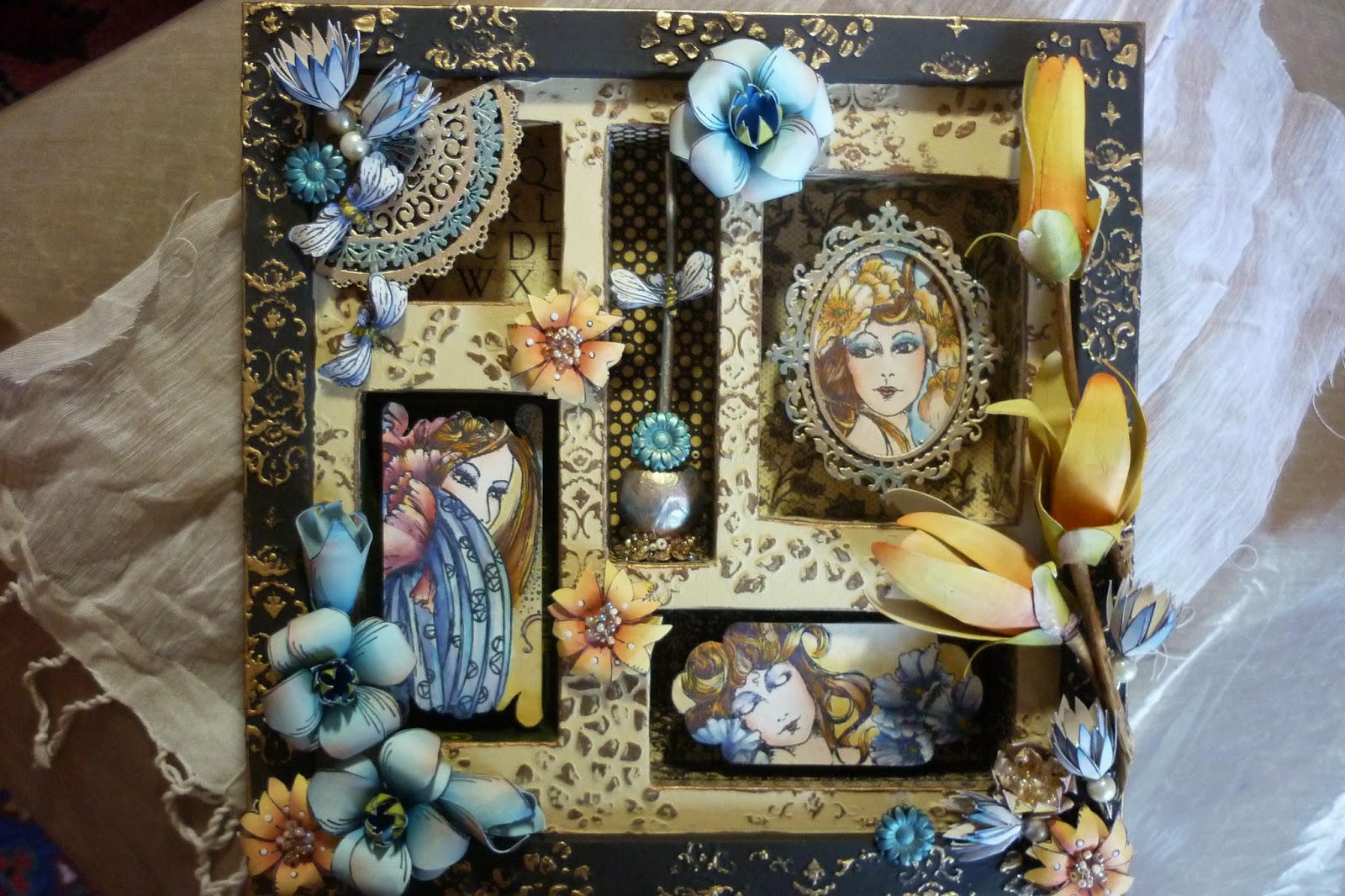 I started with a deep frame (from Ikea). I could have used a Tim Holtz configurations box but I wanted larger spaces, so I made my own frame with Niches. I cut a piece of Grey Board to fit the frame and then cut the apertures in the board as I wanted them. 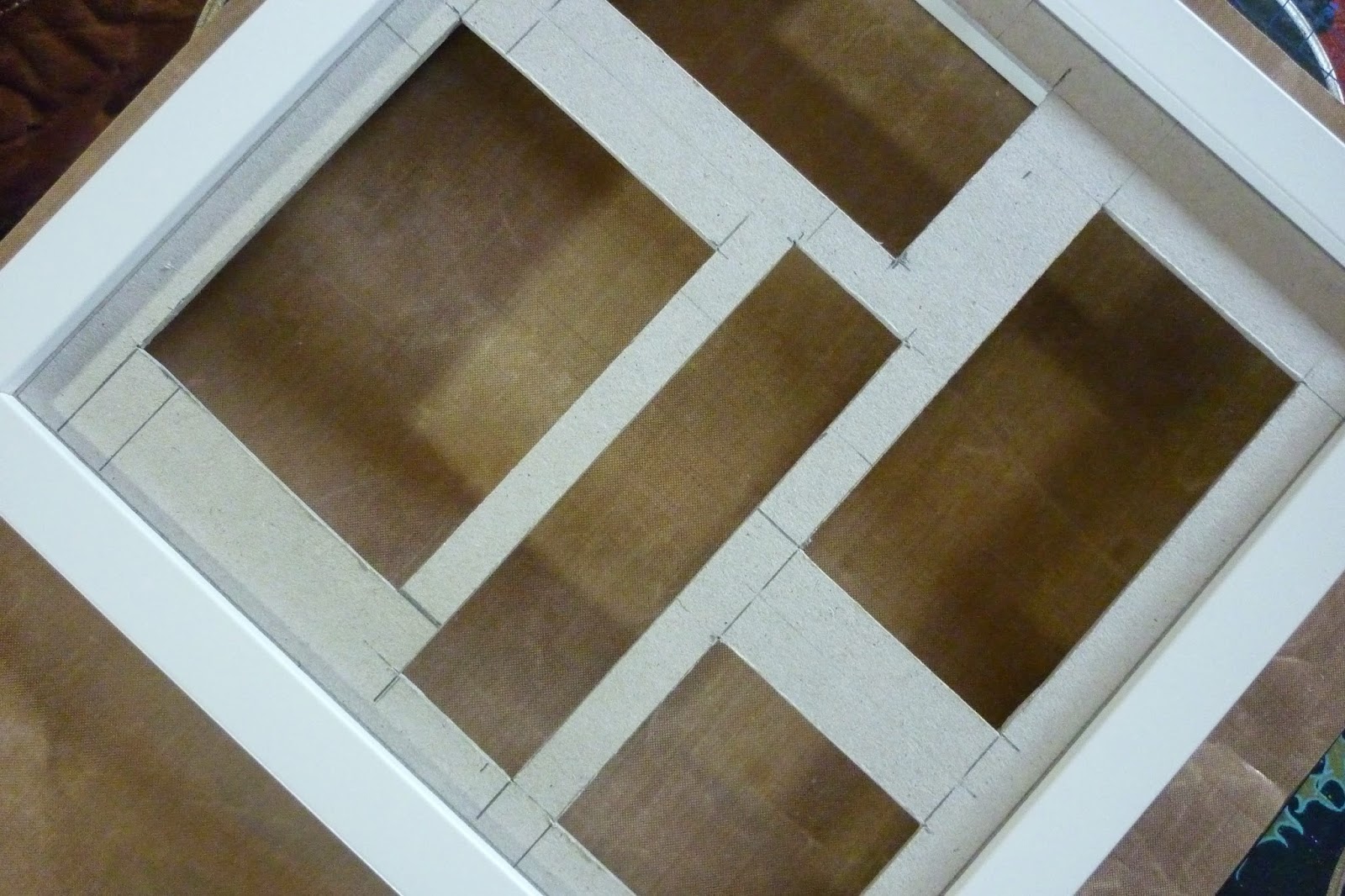 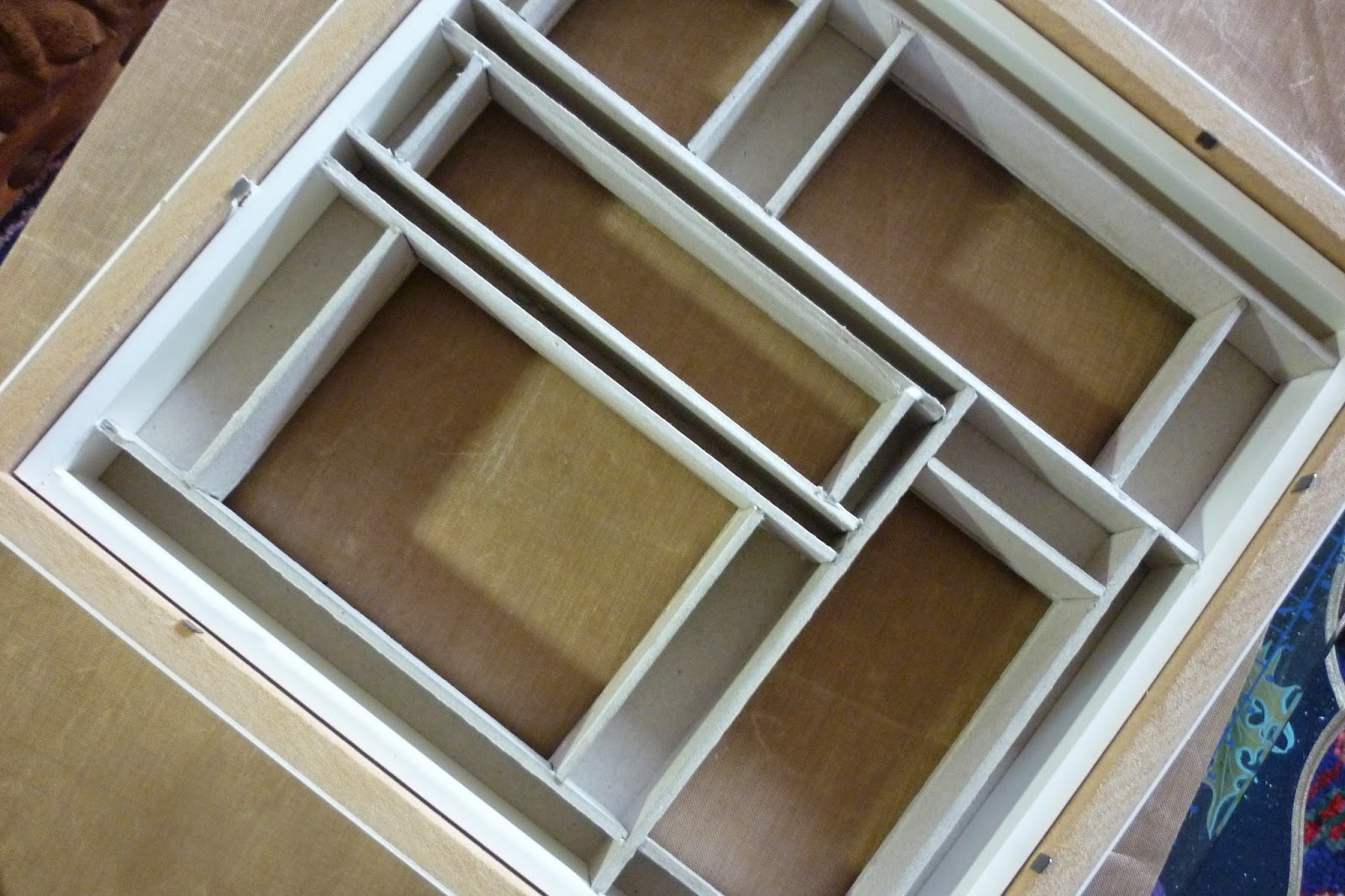 The back of the main frame can then be put in place with plenty of strong glue to hold it in place. 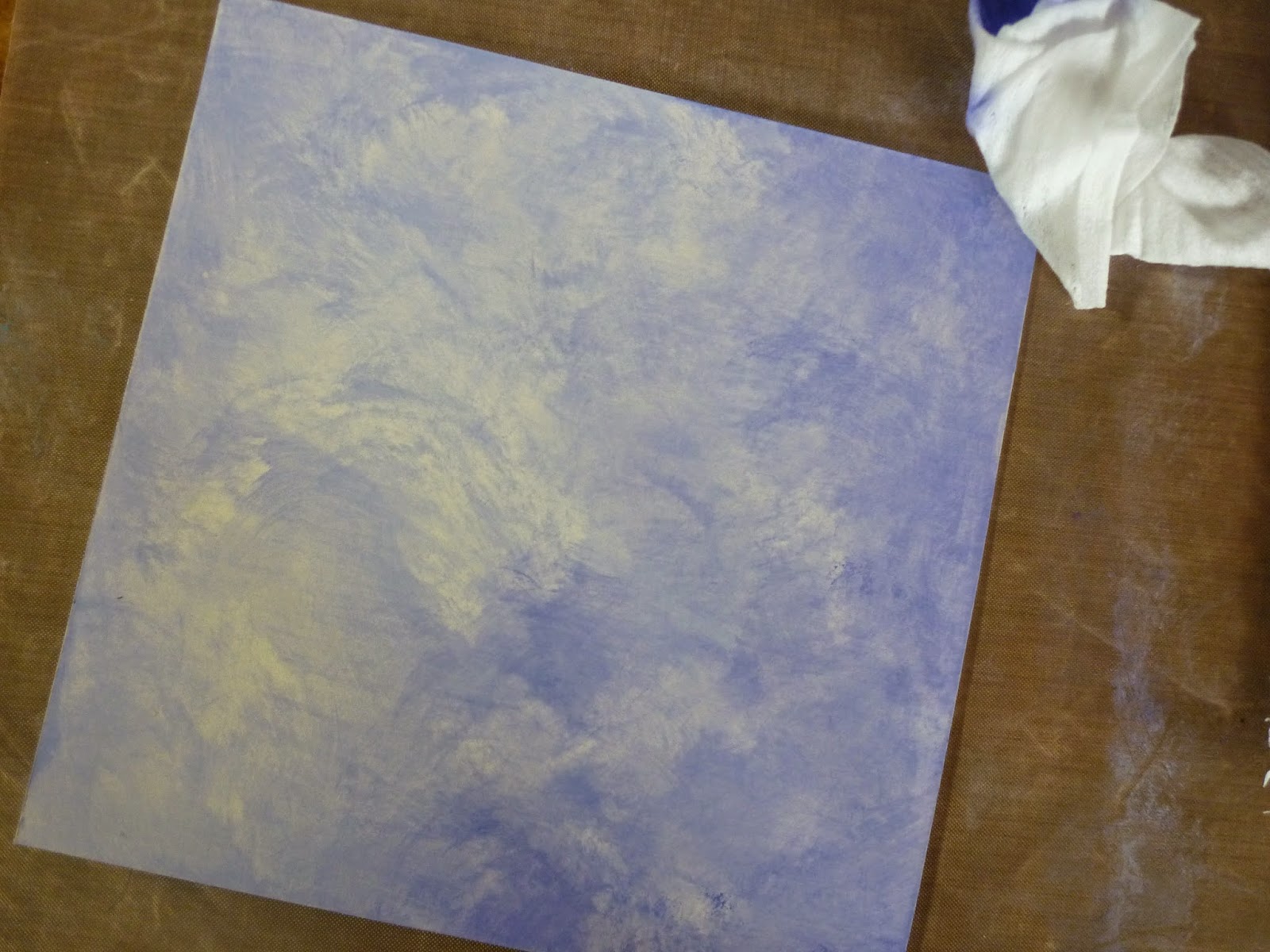 I then lined all the niches with various papers (these are from Graphic 45) which had co-ordinating colours to fit my colour scheme. I find that if I sand the edges of the paper once the glue is dry I can get a neat finish around the top of the niches. 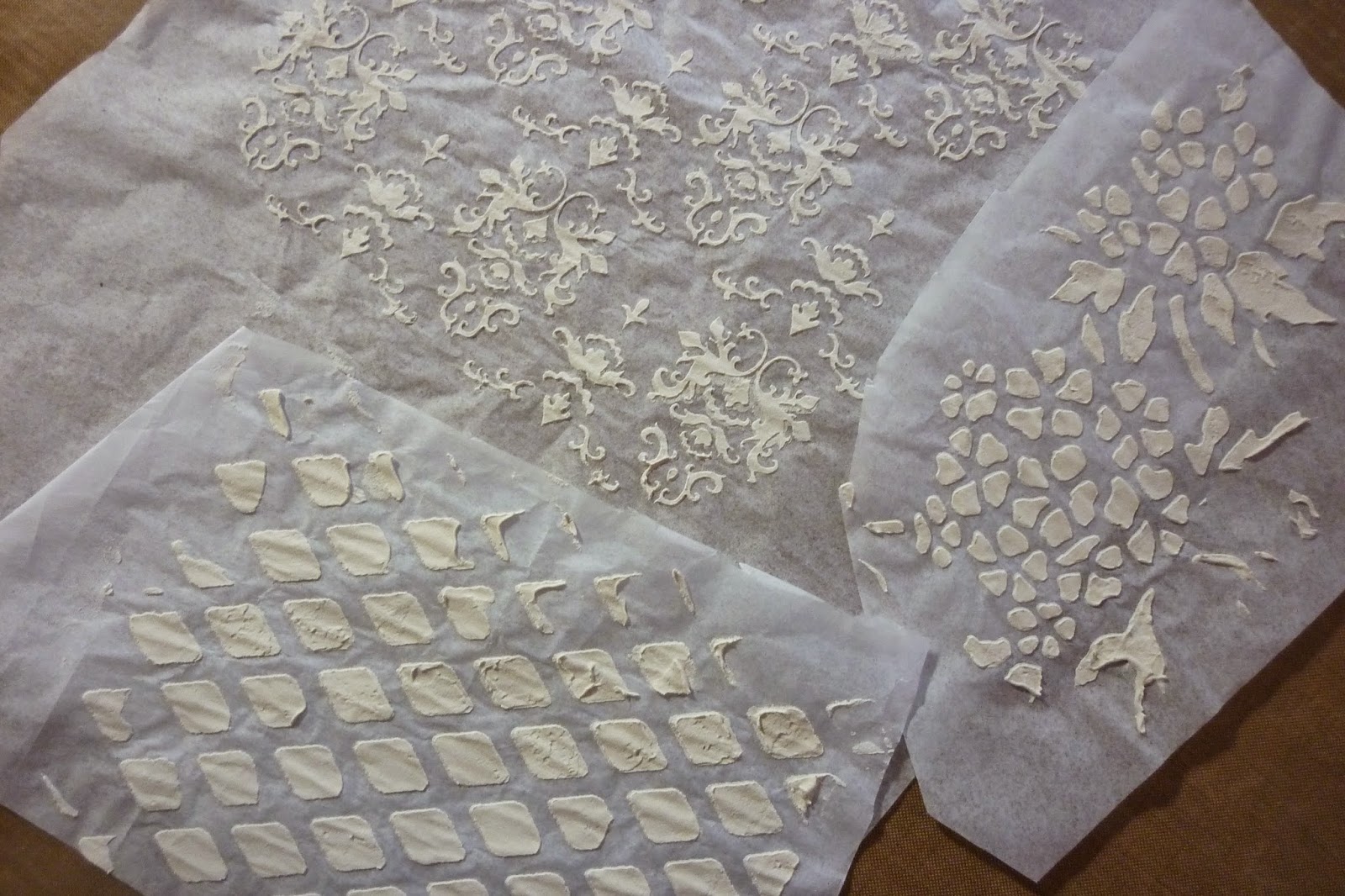 Now it is possible to cut the paper up into pieces that fit wherever they are needed and adhere them to the frame. To adhere the Tissue/ Grunge Paste stencils in place paint a layer of Matte Medium onto the frame and the put the tissue over it. Carefully paint another coat of matte medium over the tissue and ensure the it is stuck down . 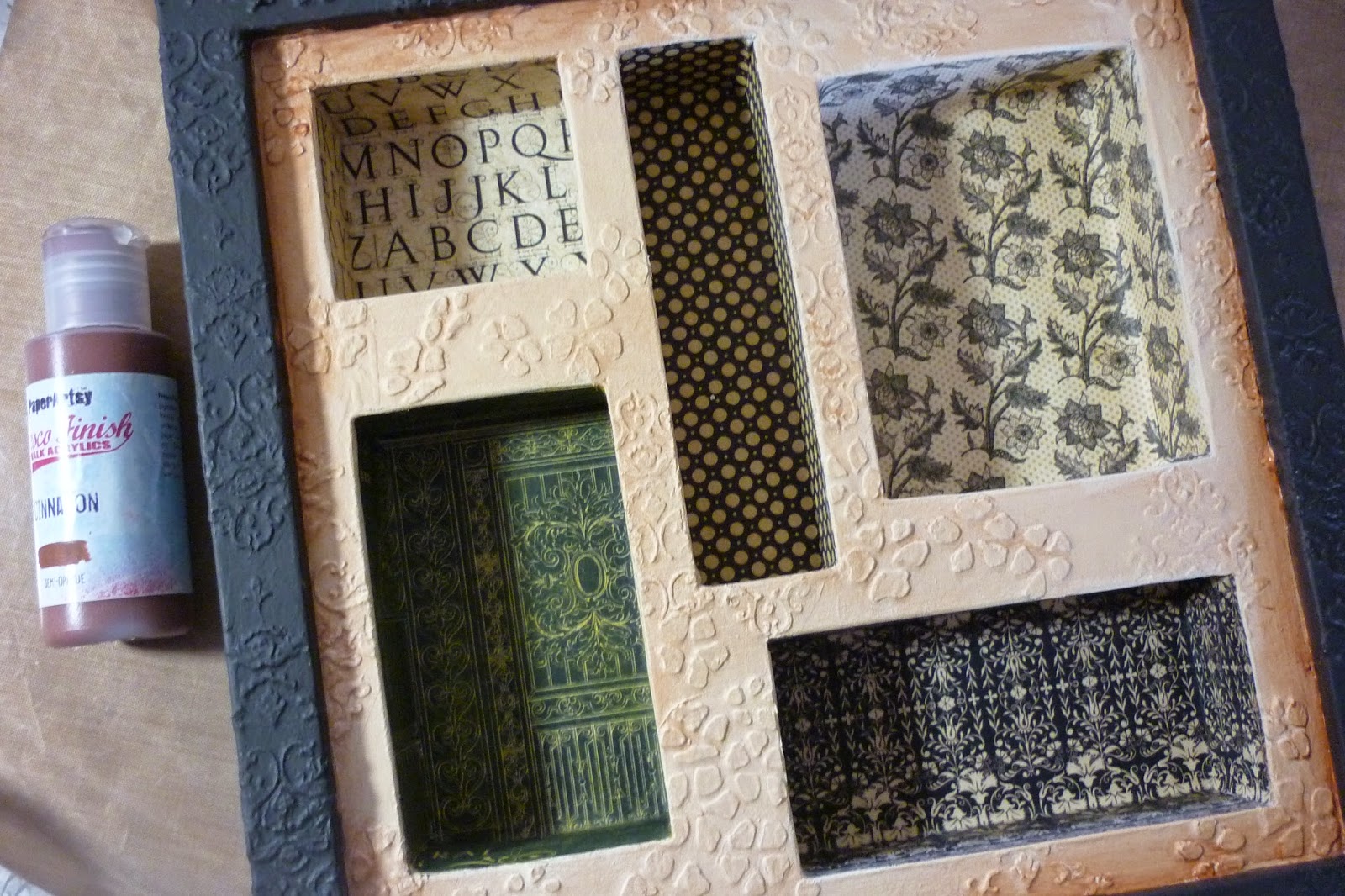 Now I started making the flowers. Firstly I wanted to make Magnolia shaped flowers, so I stamped several of the two larger baubles from EEB01 onto Smoothy White Stamping Card. I cut out the shapes and painted over the design – one side with Honeydew and the other with Nougat. I then washed Pumpkin Soup over the nougat and Autumn Fire towards the base of the baubles. Looking back I think it might have been more interesting to stamp onto card  already painted with honeydew so that the design could have remained and been seen on the inside of the flowers. Too late now! I used a large ball tool to shape the petals and then adhered them to a small wooden bead (also painted with Honeydew). The smaller baubles formed the inner petals and the longer ones formed the outer petals. I stamped some leaves from Squiggly InkFlora and Fauna 5 and painted them to create the base of the flowers. When everything was dry I made the stalks from dried poppy seed stalks but twigs would have done as well.
Flora And Fauna 5 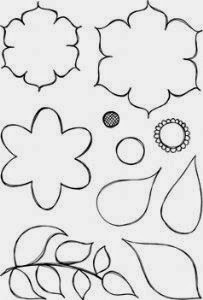 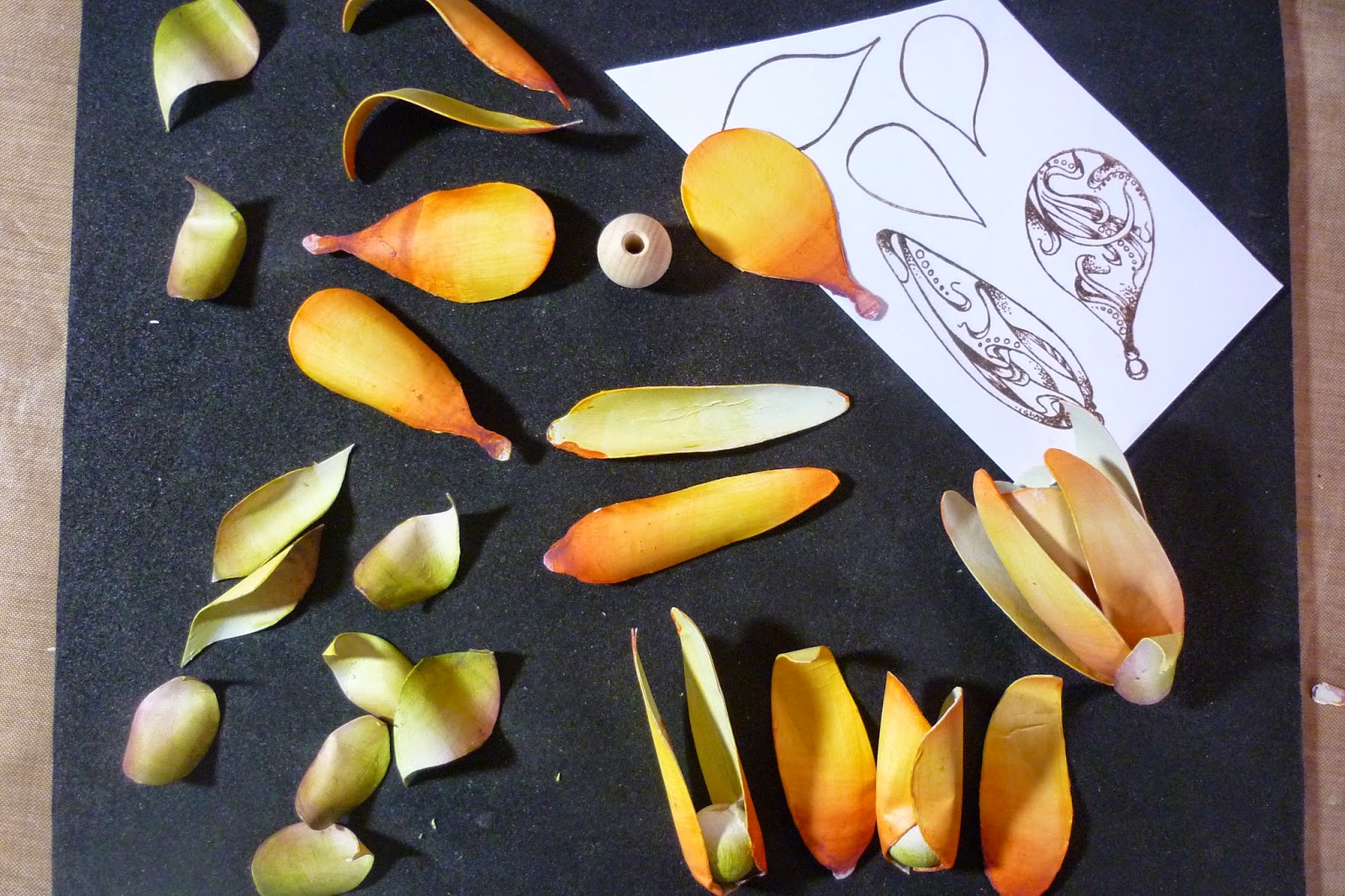 The blue flowers were made using ELB15. I stamped them onto card painted with a pale shade of BlueOyster made by mixing it with some Nougat. I washed areas of the flowers withBlue Grass and / or Blueberry and then washed small areas with Autumn Fire.The centers of the flowers were stamped onto the same card using Egg and Nog 4. I washed Autumn Fire in the center and Hey Pesto around the edges before cutting them out. I then cut down the side of on petal and cut out the center of the flowers so that I could curl it up to form a cone shape with the coloured side on the outside (put glue around the center of the flower before curling to stick it together). The flowers put together with two layers of petals with the curled bit in the center.
ELB15 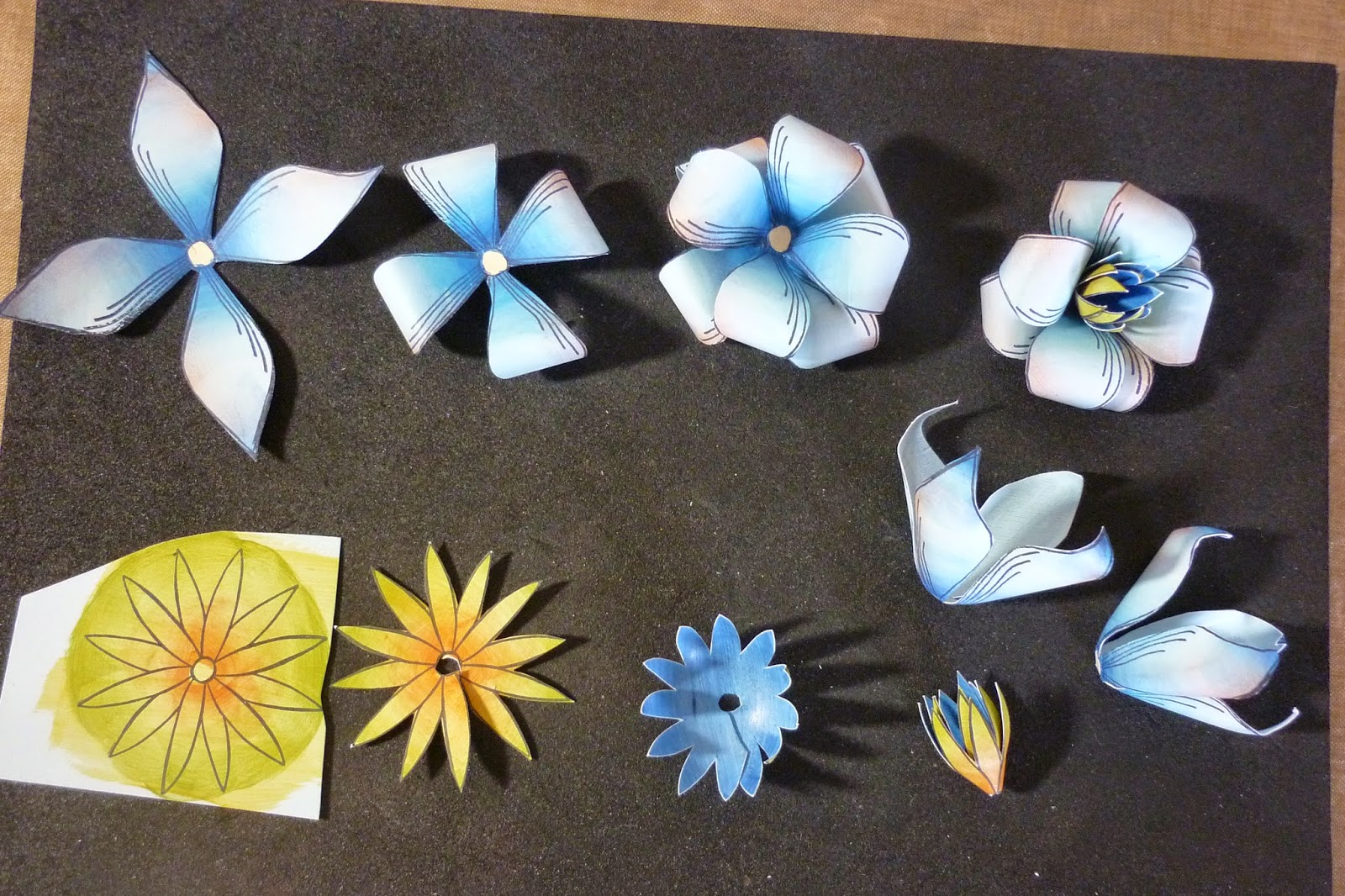 Now for the little spikey flowers which were made in much the same way as the centers of the blue flowers. I stamped the design onto card painted with Nougat and then washesBlue Grass and/or Blueberry around the flower before cutting it out. This time I curled a second layer over the first to get more petals. When the glue was dry I stuck a headpin with a bead on it through the center of the flower and then stuck a pearl onto the pin at the base of the flower. With a little pinflair glue put around the top of the headpin I added some seed beads inside the flower. 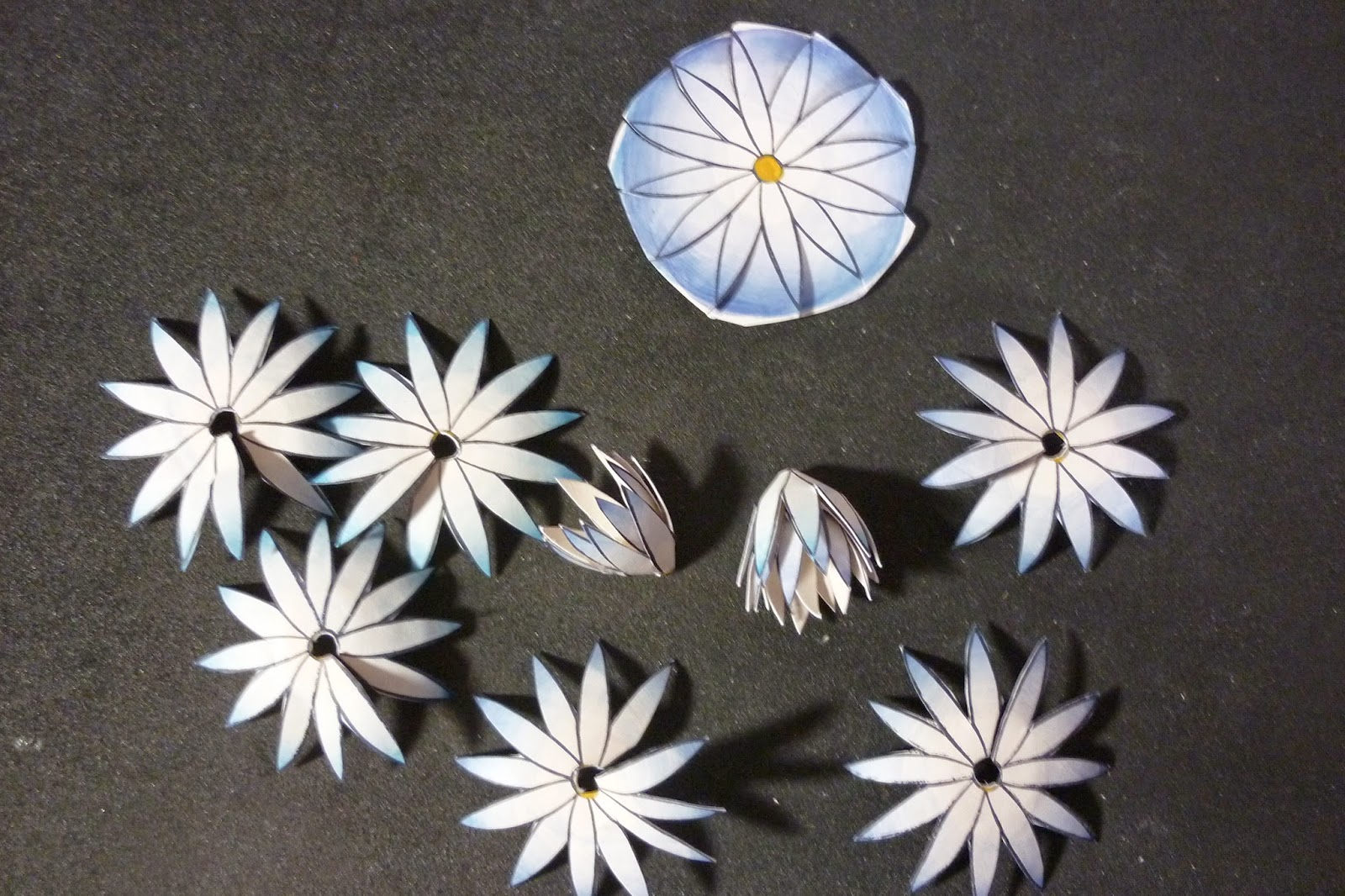 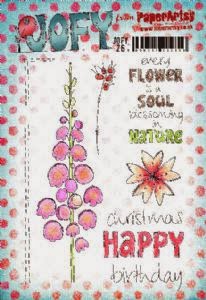 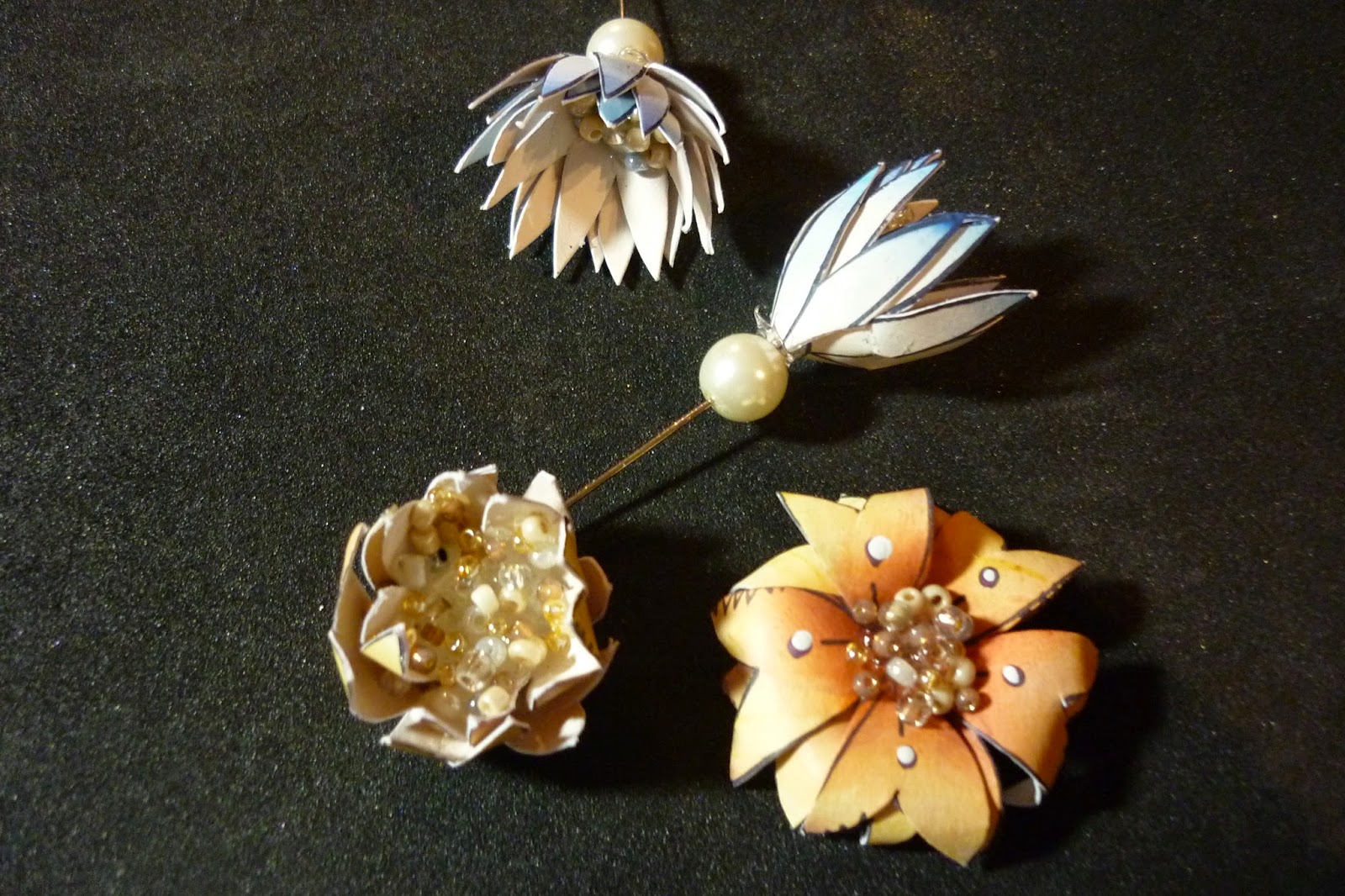 I then stamped the faces from EEB03/04 and 05 onto card painted with Nougat and coloured them with colours from the palette that I had been using. You can see that the design with the lady who is dreaming doesn’t have the background design showing. Because I had stamped onto a painted background it was easy to paint over  the part I didn’t want to see. I stuck the painted faces into some shaped card and added a frame around one. I raised the pictures inside the niches  by sticking several layers of foam board behind them and then sticking it into the niche. 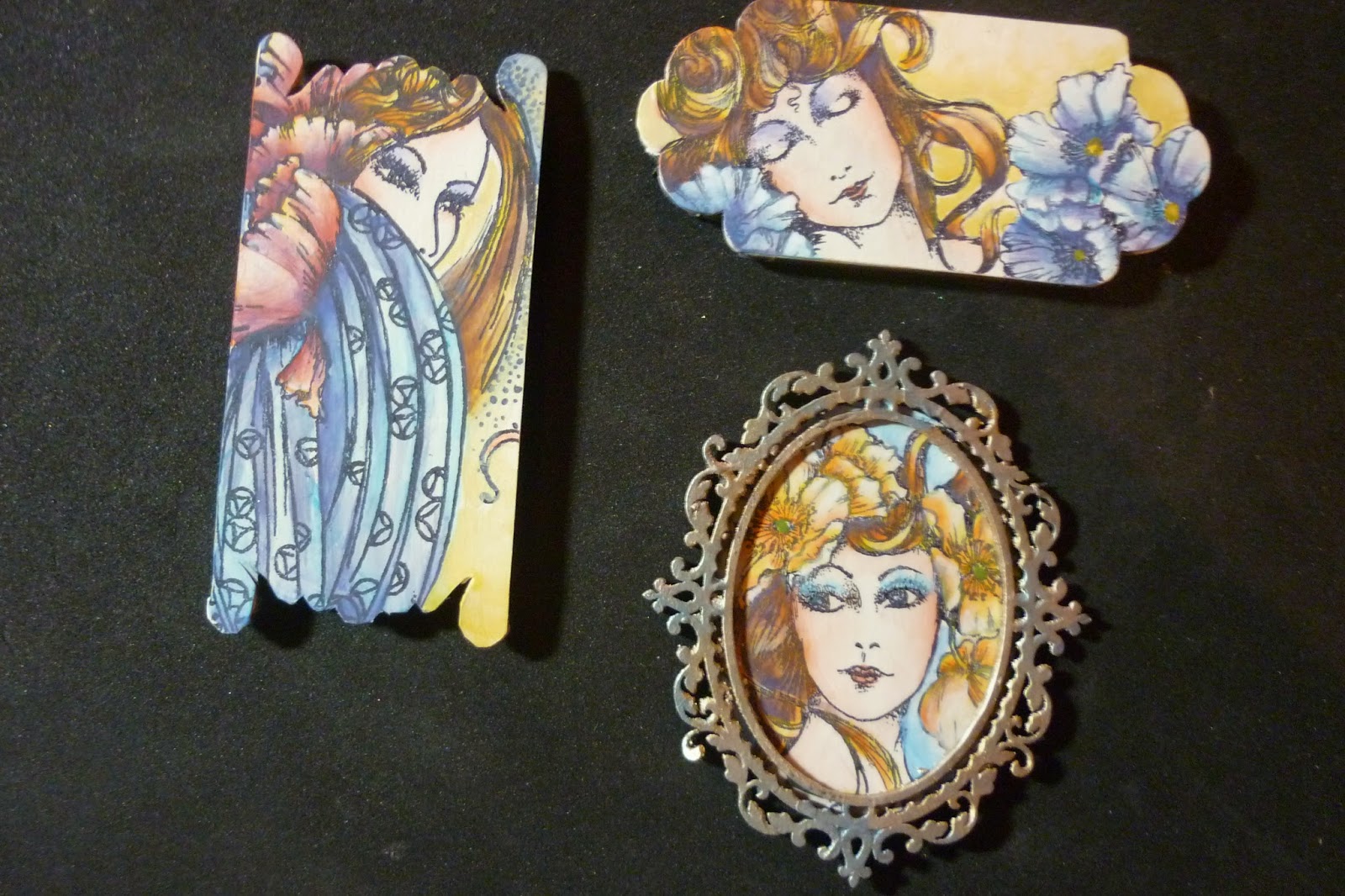 This final photo shows the little extras that I added. I stamped the bee from EEB04 and cut out two layers to give it some dimension. The fan was from my stash and coloured with treasure gold. The central niche holds a dried poppy seed head painted with treasure gold . I added more seeds beads around the base of the seed head. There are several buttons also painted with Treasure Gold. 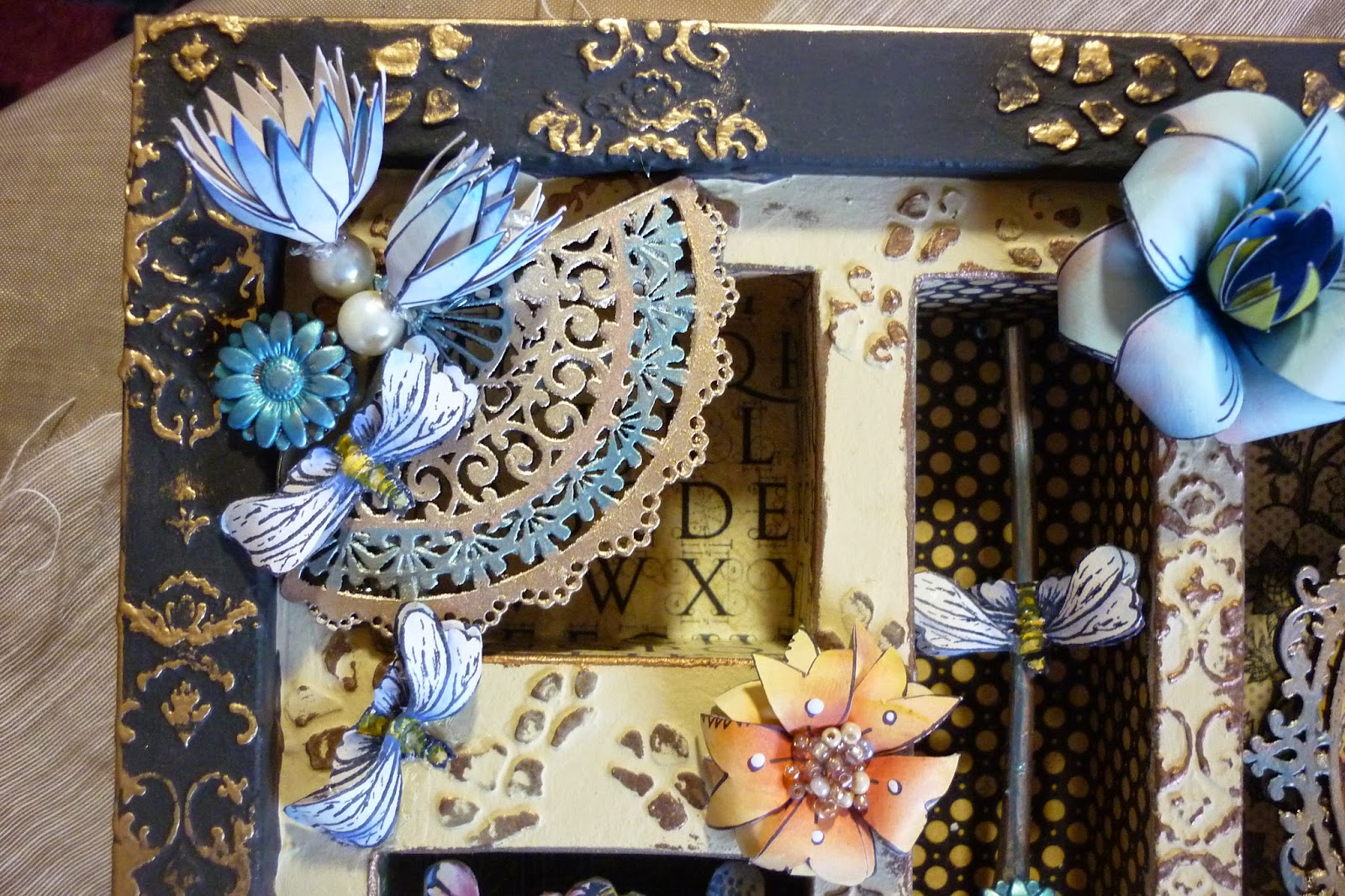 Here are two close ups of the finished project after everything was stuck in place. 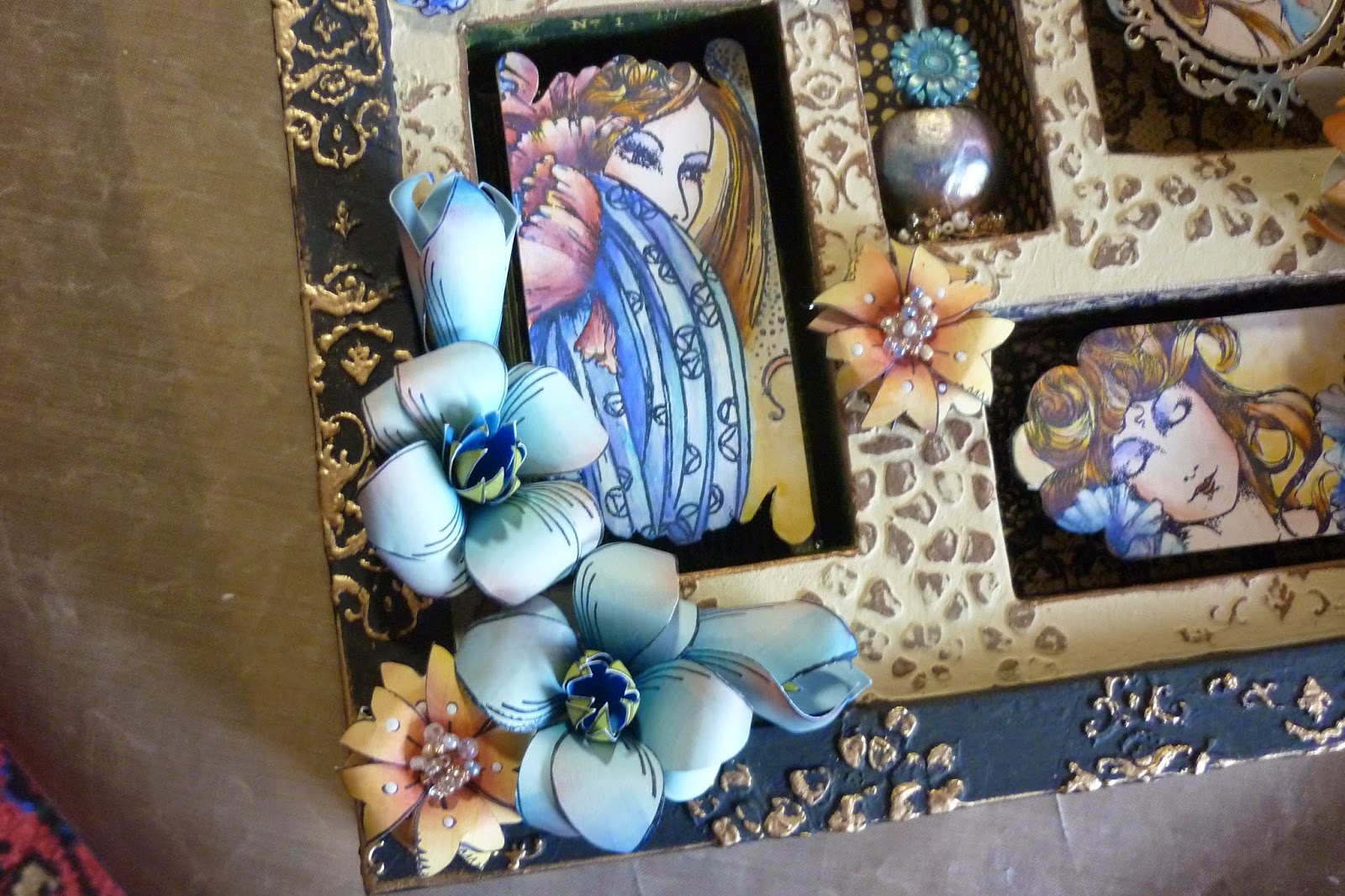 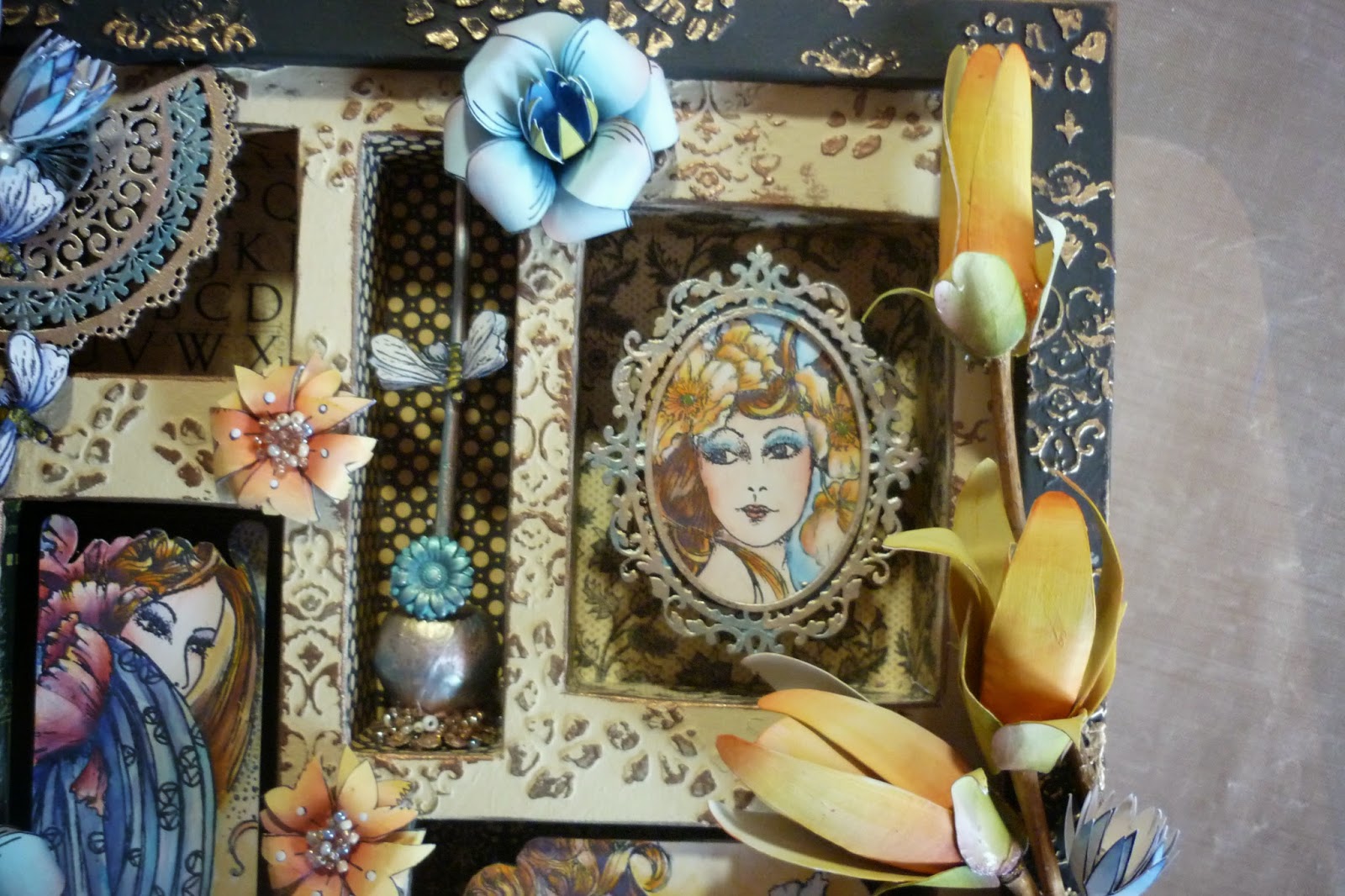 I hope that you have enjoyed my little adventure into fantasy flowers and I will be back soon with more ideas.

Liz you have created a beautiful niche using the different collection of stamped images. The attention to detail is wonderful. The application of Grunge Paste and Treasure Gold add beautiful orante texture to this project. We love the 3d dimension the flowers have added. Exquisite! Thank you for sharing your creativity.


We would love you to join in with challenge #7: Niches If you are inspired by any of our guests who blog with us over the fortnight, then please join in and link up your creativity HERE.

All links go in the draw to win a voucher to spend on products of your choice from the PaperArtsy online store. The Niches link will close 17:00 (London Time) Sunday, April 26th, winner will be announced 2 hours later at 19:00.
Posted by PaperArtsy at 18:00

Your stamps are just perfect for this project, and the flowers are gorgeous.

So imaginative and pretty! A work of art.

So beautiful!! The faces are painted perfectly & the flowers are gorgeous.

Liz, this looks absolutely stunning and the amazing amount of detail is so beautiful.
Fliss x

Gorgeous work - I love your texture and detail. Stunning!

Hi Liz I just love this project , love the flowers and the little pictures , just love ,love, love it,,. I want to make some of those flowers ,,. See you soon , love Annie xxxxxx

Wow! This must have taken you ages. All that detail! It's fabulous in every sense of the word. Lx

Gosh this is just gorgeous, it has taken a lot of work but I am sure Liz enjoyed the process as the result is stunning from the papers to the stamps used everything looks wonderful.
Smiles:)
Sue

absolutely amazing - this is beautiful xx

This is absolutely stunning Elizabeth! Your talent for construction (ie the niches) is almost as amazing as your artistic talents. You always pay such a lot of attention to the minutest detail and it certainly pays off with gorgeous results like this.

A wonderful make, and the flowers are really fabulous!!! Coco x

Beautiful Liz! Your attention to detail is stunning and the Magnolia flowers are gorgeous! Sue C x

This is absolutely gorgeous and lovely details. xx

Wow Liz what a magnificent construction. The niches, the flowers, those stung stamps of yours and the way you paint them all is fascinating! Super!

thank you for the flower instructions, these look stunning. Your projects are also so pretty and elegant xx