With some fab ideas when using tissue paper and a creative combo of characters, Dounia has a band of 'fierce' on her desk; totally useful and thoroughly striking! If you follow her tips about blending the background with the focal images, you're sure to end up with a wonderfully cohesive mashup - just like her.
~ Keren
Hi everyone, it's Dounia with you today, and I'm here to share with you a desk organizer I customized with a whole PaperArtsy Tribe!
I sometimes struggle crafting or making art just for the sake of it so I love making something both useful and beautiful. This project involves fierce warriors, also fierce ladies, a limited colour palette and me getting out of my comfort zone! I have been wanting something to tidy up my work space for sometime now. Not really knowing what it was, I bought a pile of MDF pieces in a thrift store. Once home, I built it and it took me an hilariously long time to realize it was a desk organizer (I was holding it upside down!). I immediately knew I wanted to populate it with some of Lynne Perrella's characters. I particularly fell in love with her 'modern' stamp sets, LPC053 and LPC054. 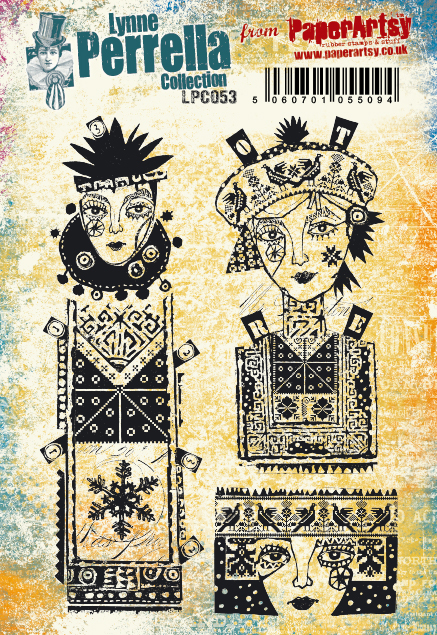 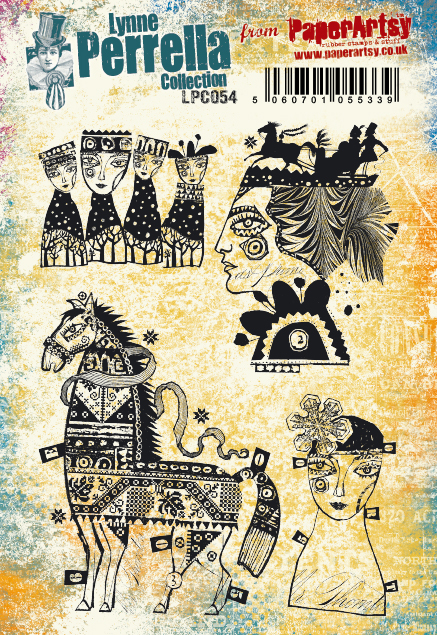 I then remembered this Mash-Up topic, and I thought the ethnic Warriors from Gwen Lafleur's EGL09 would be a perfect complement to the lovely Lynne Perrella ladies. They are comparative sizes and can totally belong to the same 'Intricately Patterned' tribe! 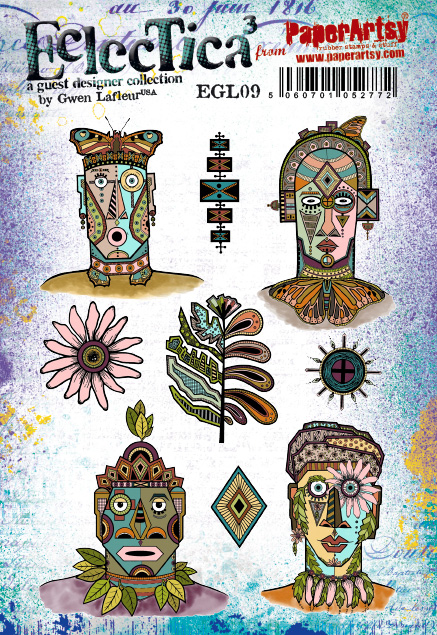 When crafting, I generally tend to go with the flow and make things up on the spot but considering I was going to work on the disassembled pieces, this time I decided to make a placement plan. 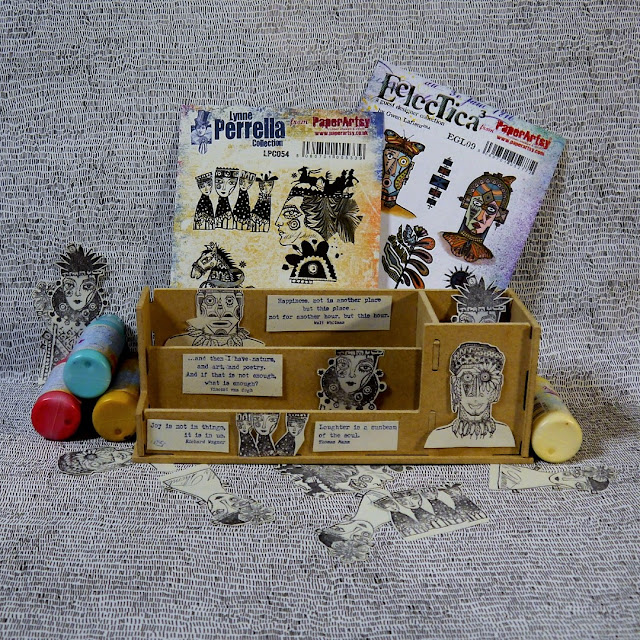 I love the patterns made by letters and I must admit I often struggle to connect with quotes not in my native language so I had originally planed to use the Alison Bomber's quotes in this Mash Up to build the background. I did not want to crowd the surfaces too much and with people alone, it looked a bit bare. The quotes then got a leading role! I chose EAB14: The Happiness Edition, because who doesn't want to be happy at work? 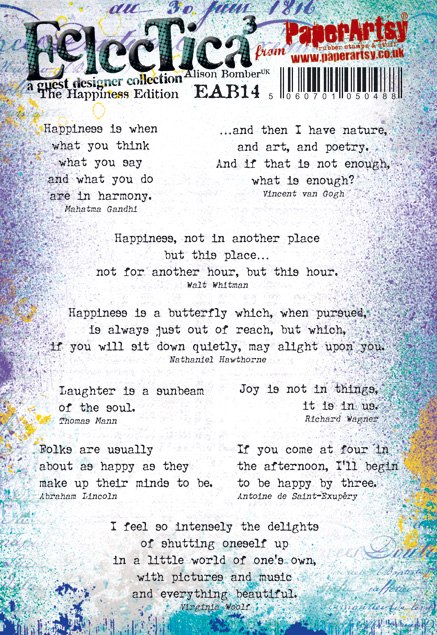 To help creating a cohesive look among all the collections, I decided on a very limited colour palette of Fresco Finish acrylic paints. I mainly used warm colours, my favorites, with light base of Vanilla to showcase the black stamping. Pumpkin Soup is darker but in the same family, so I was sure they would work well together. I added Cherry Red to pop against the creamy yellows and Caribbean Sea for a strong contrast. 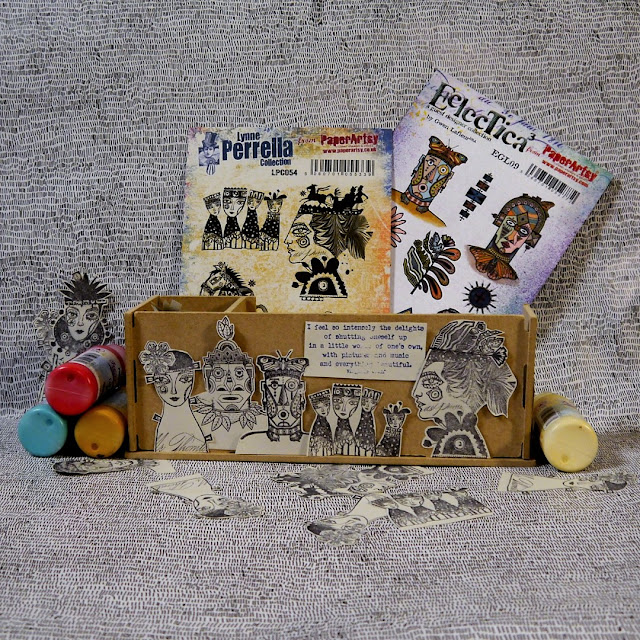 After disassembling the organizer, I coated all the pieces in my chosen colours. I find that two thin coats works better for me than one thick one. As the base is not going to be seen a lot, I painted it blue for maximum contrast. Ellen Vargo's texture stamps are amazing to give interest to a background. One of my favorite is EEV06 with all its bubbles and circles. 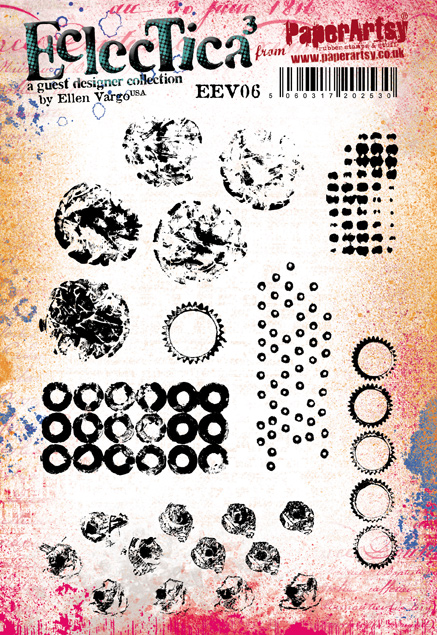 I wanted the stamping to be visible but not too loud so I used the coordinating Pumpkin Soup for a tone on tone effect. I had initially planed a much more involved background but I realized I had vastly overestimated the size of the substrates compared to the characters! I ended doing only one round of stamping. 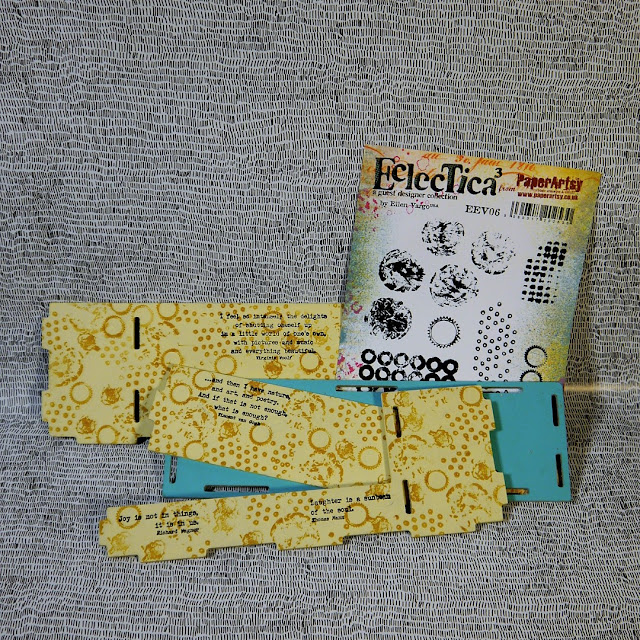 It was then time to focus on my characters. I was not confident enough to stamp and colour directly on the wood pieces so I stamped everybody on tissue paper. I had to do quite a bit of masking, especially for the family on the back. Thankfully I had already fussy-cut all those pieces to to make my mock-up! 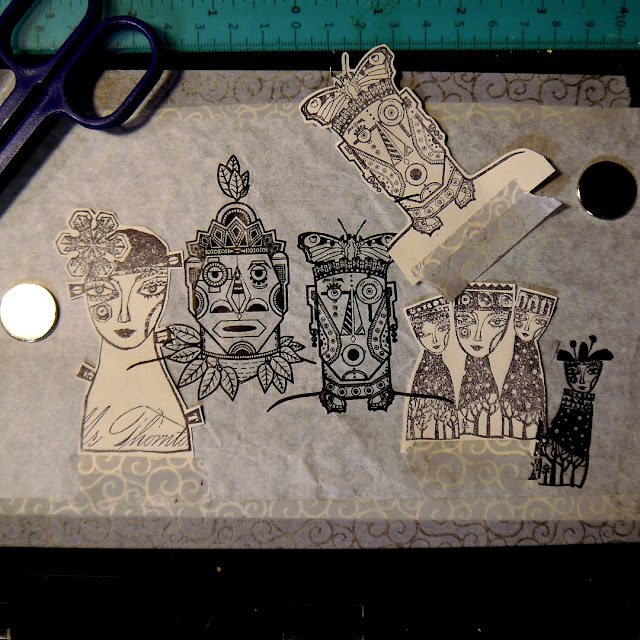 Nothing brings life to a character like colour so I painted on the backside of the tissue paper. I was at times a bit frustrated with my limited choice of colours but I persisted! It was interesting as it forced me to really think about colour placement and I ended leaving a lot more uncoloured spots than I otherwise would have. To be sure that the faces would be differentiated from the background, I decided to cover them with opaque Cloud 9. I was however worried they then would not integrate enough with the rest so I first added a few of the same Ellen Vargo's stamps. 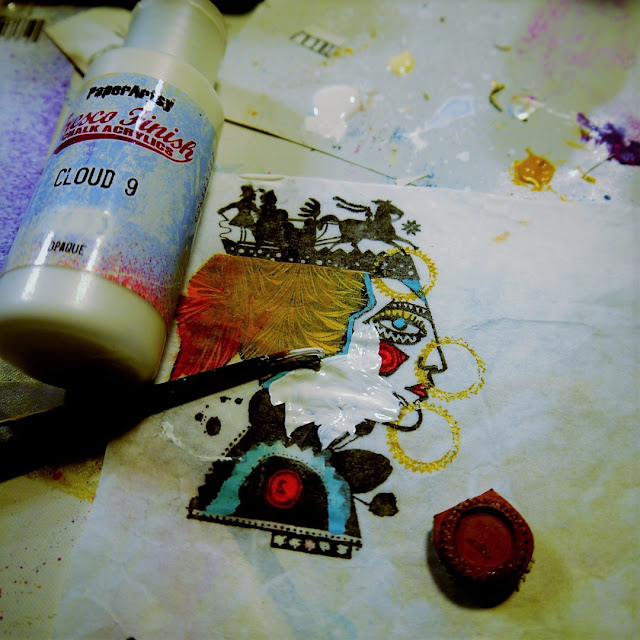 Here are the back of my characters, very blank faced... 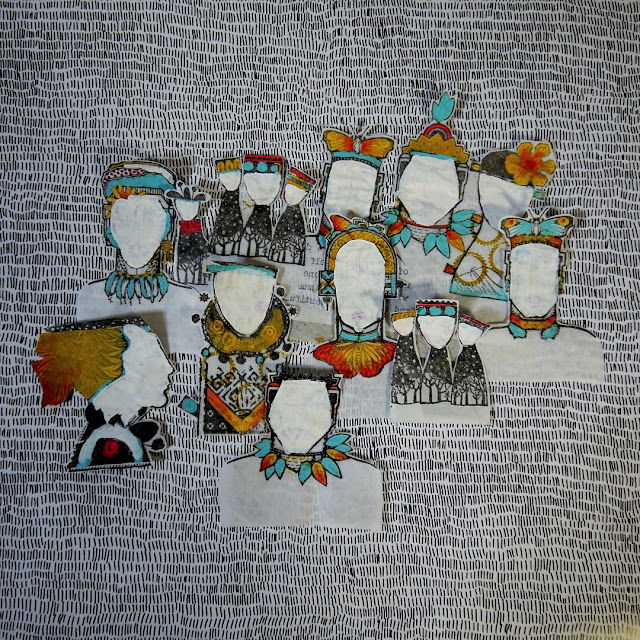 And here is the front, a lot less creepy but a lot more muted. 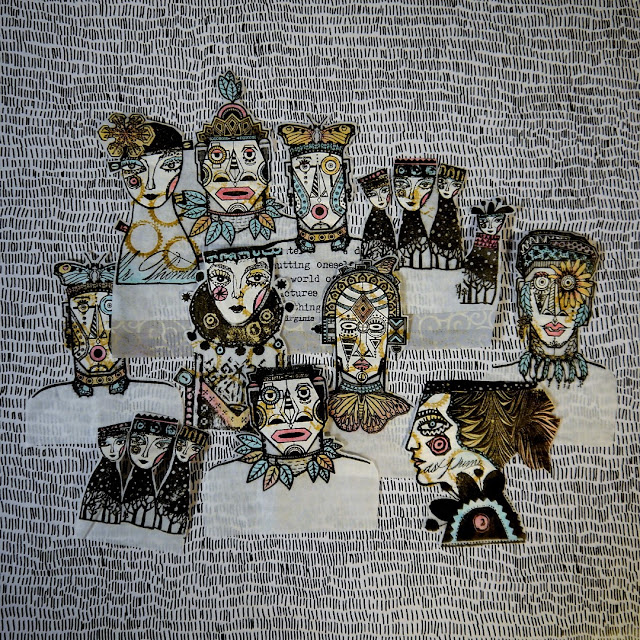 I then fussy-cut the images and glued them to the substrates with lots of Satin Glaze. Adding the wet medium on the top of the tissue paper thankfully bought some the colour back. As my tissue paper is on the thicker side, the result is not as bright as the original paint colours but I like the overall effect. I feel the characters melt into the background. 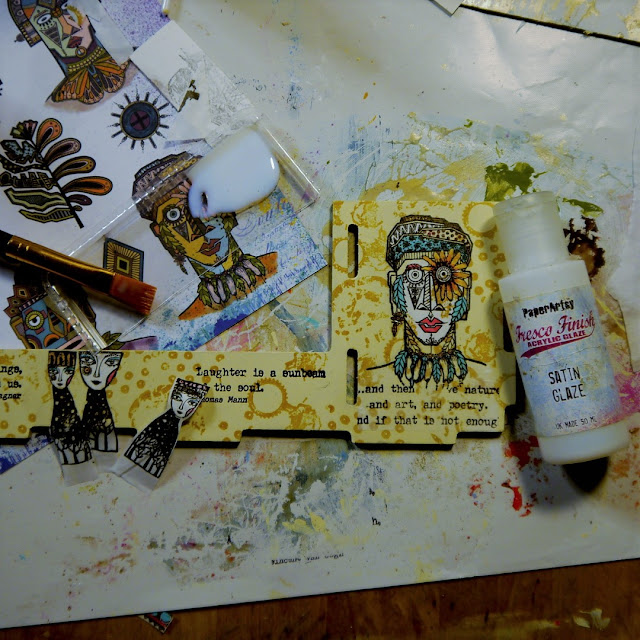 Now a few personal details about my tribe members. I was worried some of my warriors would look like floating heads, so I 'dressed' them with Alison's quotes. I like the concept but feel my execution is not always the best. 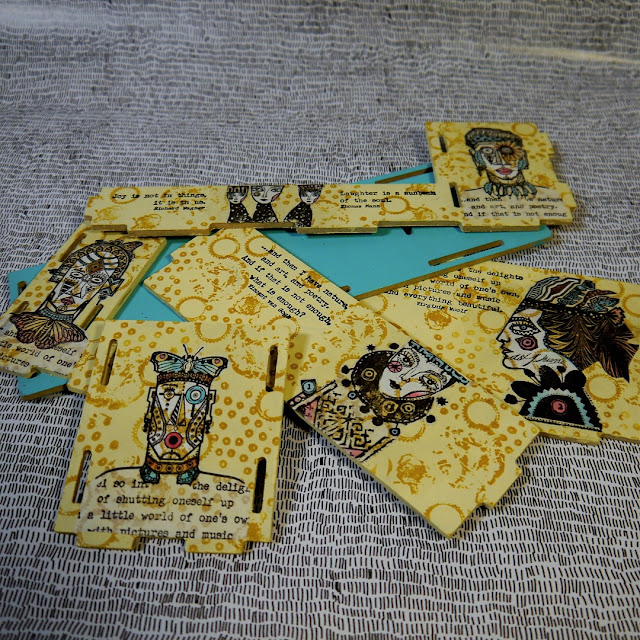 While I love the details of the design, I felt the sleigh on the top of the big lady from LPC054 did not really go with the theme. Instead I used the flower in Gwen's set to make her an ethnic crown. They really meld together very well and I really like the resulting composite image. 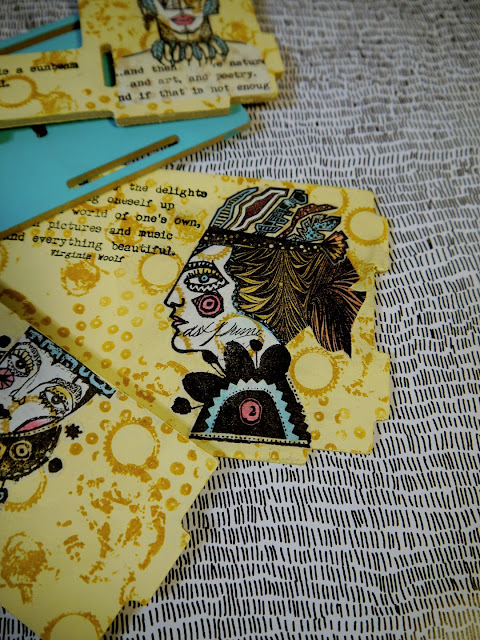 I then steadied my nerves with some chocolate and began rebuilding the organizer. It involved a lot of frustrated huffs, some heart stopping moves and a hammer but I got there... only to realize I had forgotten to deal with the sides of the pieces! That thing was not coming apart again so I painstakingly painted those with a tiny brush. I really really should have done that before but I love how the turquoise contrast with the yellows and brightens the whole project. 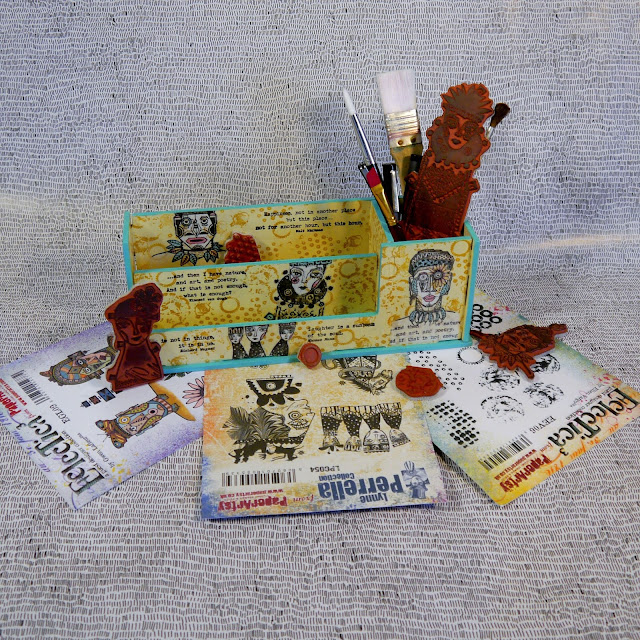 I slathered the whole thing in gloss varnish to protect and deepen the colours. I was lucky to get some winter sun the next day for pictures in natural light. 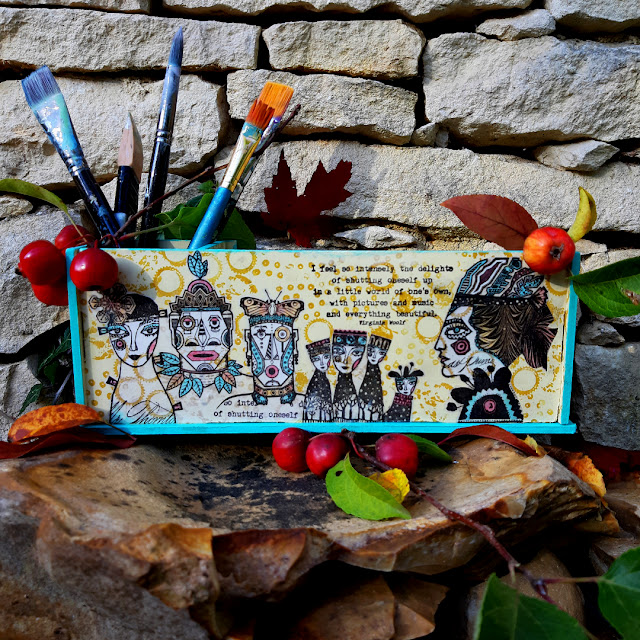 I like the placement  and the balance between text and faces on the front. That layer of Cloud 9 really makes all the difference for those face details to be seen! 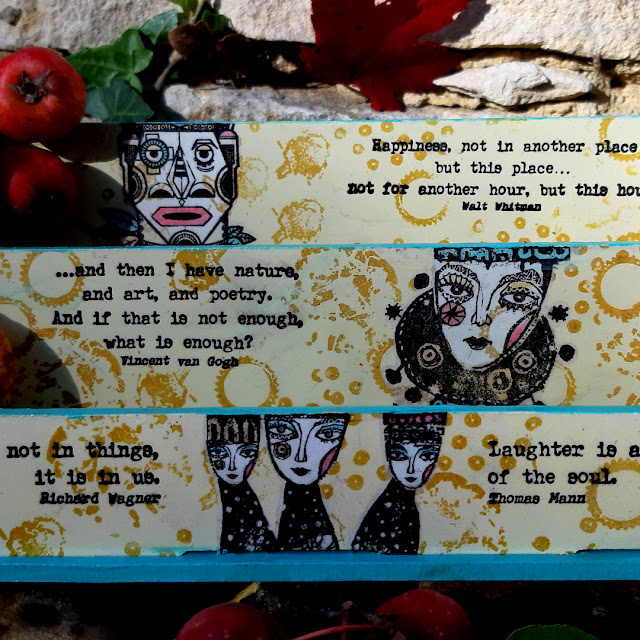 Those guys have so much personality! 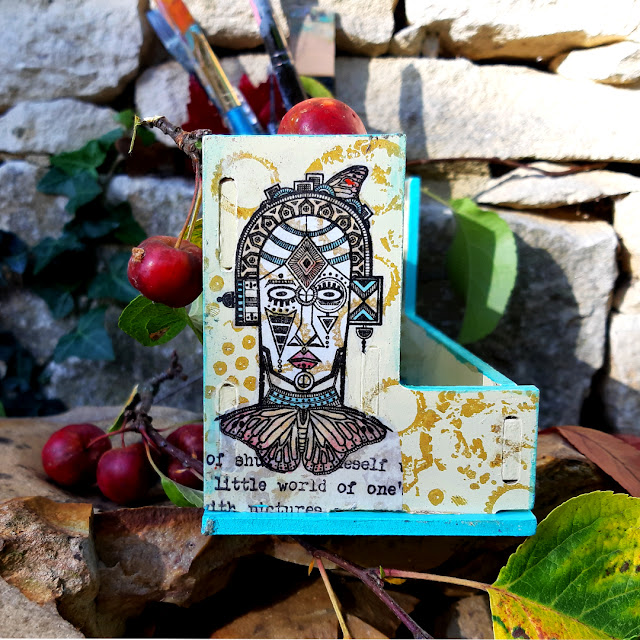 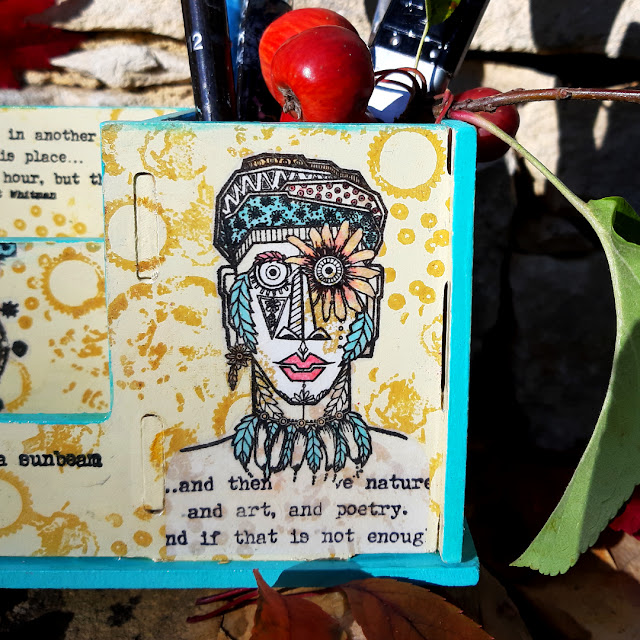 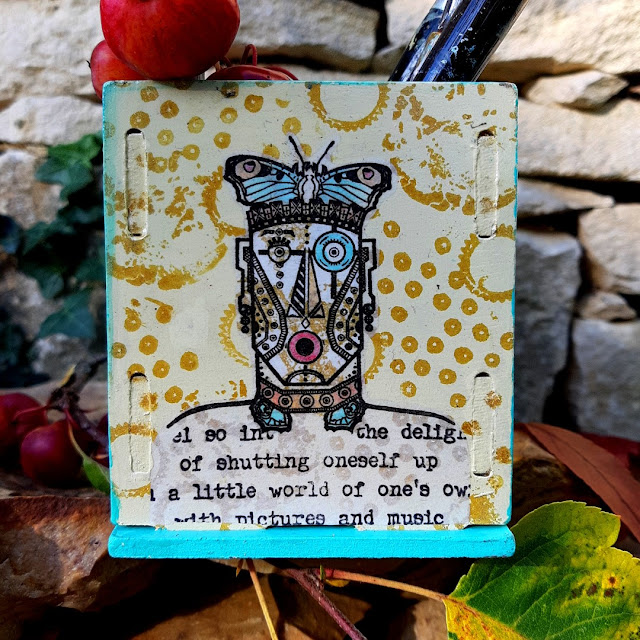 I am very happy with my organizer; it has already found its place on my desk! With a plan in place, things went relatively smoothly. I mainly had to remind myself 'Simple, Dounia, keep things simple!'. Tissue stamping is a oldie but a goodie, especially when you are not good at precision stamping and/or your substrate does not fit in your stamping platform (or both, like me!). I also really recommend the limited colour palette as it pushes you to think differently about your colouring. Of course, it can be on a less involved project, like a card or journal page!
Stay creative!

Dounia x
Posted by PaperArtsy at 19:00

So cool, Dounia - love the words hovering within the layers and all those fabulous characters.
Alison x

The combination of Linne and Gwen is fabulous and Alison's use of Quote is full of ideas, love your work. xx

It's a wonderful piece and useful too! Gotta love that.

I never would have thought to combine Lynne's and Gwen's face stamps together, but they work so very well together!

OOh, what an awesome mix of characters. I love practical art. This is sure to be an inspiration. Hugz

Dounia, what an excellent cast of characters you've arranged for this awesome holder. The idea is really cool and the colors and defined imagery really bring it to life. I love this project and am delighted that you shared! xx, Autumn