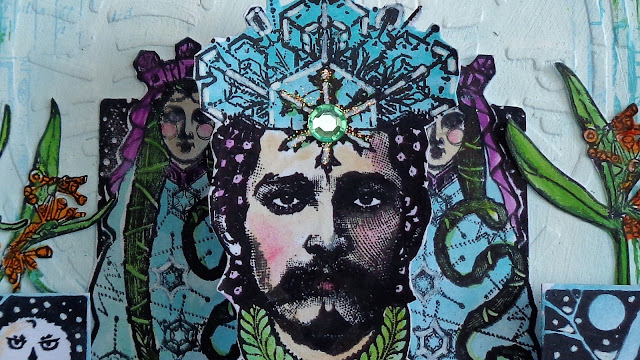 Helen has created something wonderfully regal. It's as if she's created a kingly throne especially for the main character. You'll see hints of the mash-up designers all over, so look really closely. What is clear is that she's combined them all perfectly even mashing up the sentiments themselves to create a new and unique saying.
~ Keren.
Hi everyone, it's Helen with you today with a wintery mash up project using three of the above designers. I was going to use all four, but when it came down to it I couldn't find my Ellen Vargo set!
When I started I was looking to make some pop out elements and, as you'll see later, use more of the Lynne Perrella figures, but as I went along, this project evolved instead. It does have dimension made with a strip of Gwen Lafleur's stamps so the central character stands out - it also enables the tag to be free standing. I added the pop of orange berries as a contrast to the purple and blue. 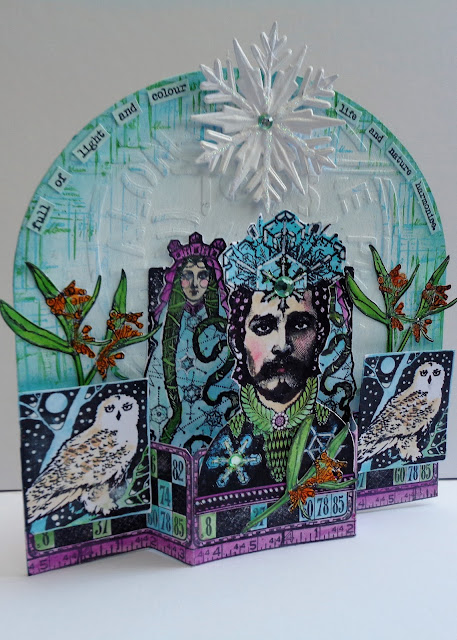 I've used a stamp platform for these images and various Fresco colours. You can see I've painted over the lines quite loosely not worrying about losing definition, as when the paint was dry I just stamped over the top again in black. These are the new Lynne Perrella stamps sets I chose to use. 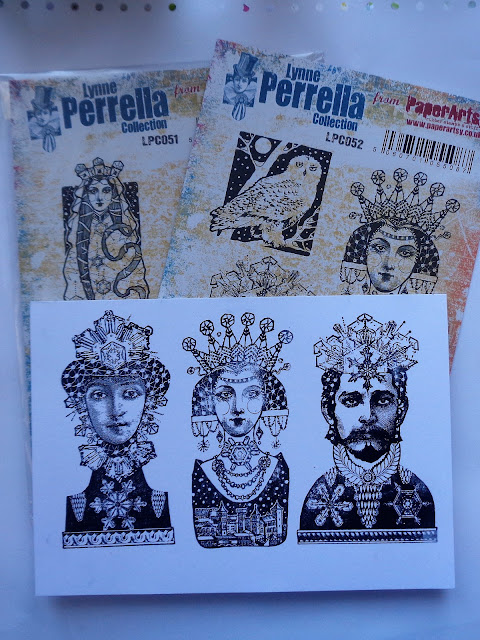 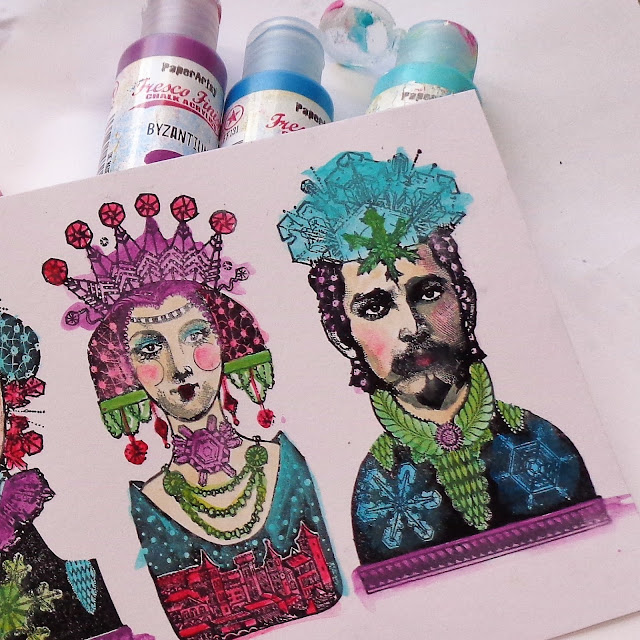 LPC051 and LPC052 can be found here at these stockists. I used a variety of paints:

The images are quite an intense black so I added some white highlights. 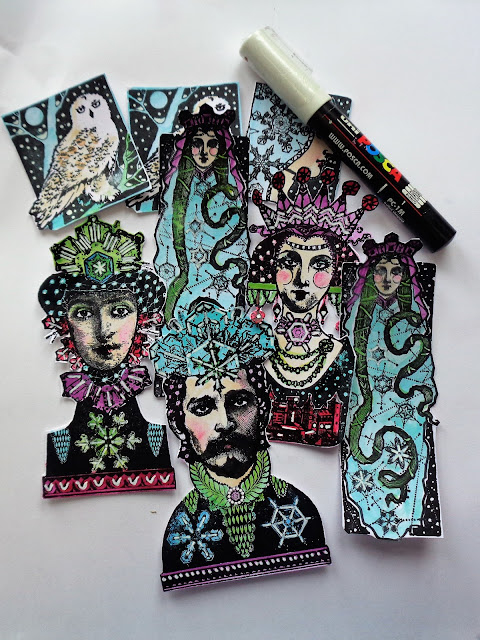 You can also see how the black outlines have been sharpened up by over-stamping. 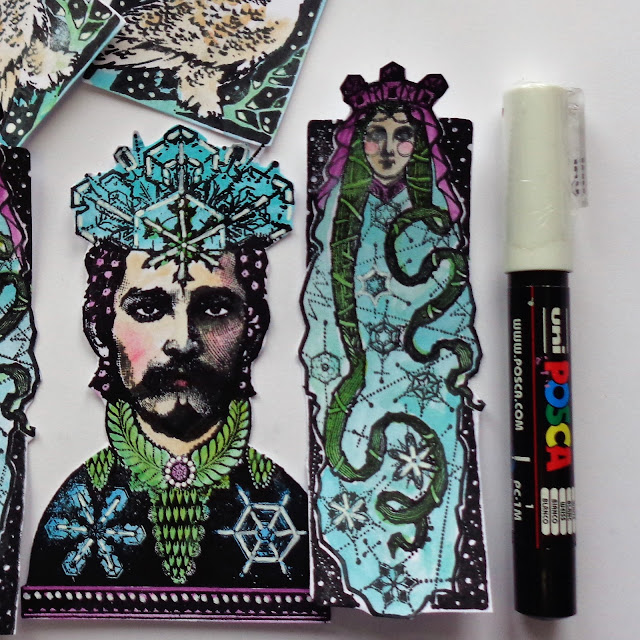 This large tag (from That's Crafty!) was just the right size and shape and worked really well with Sara's circular stencil 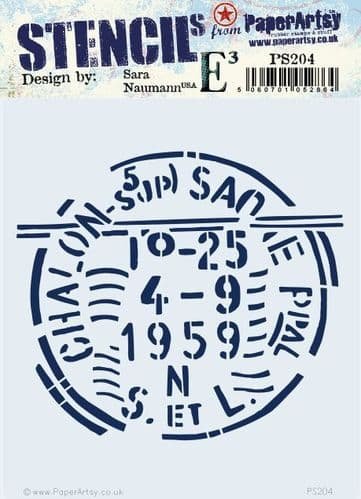 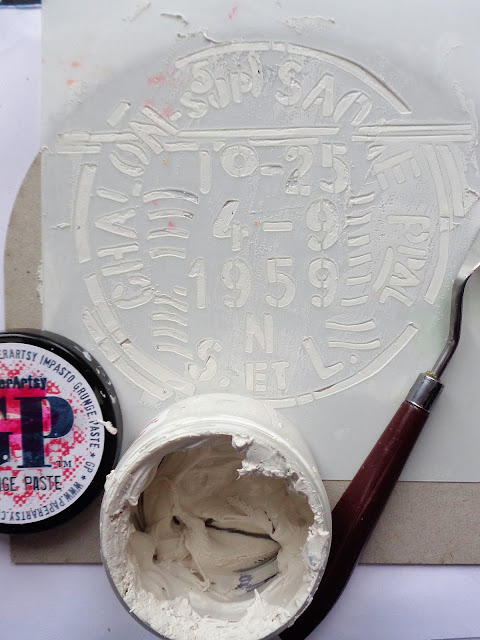 Look how clear that design is in Grunge Paste. 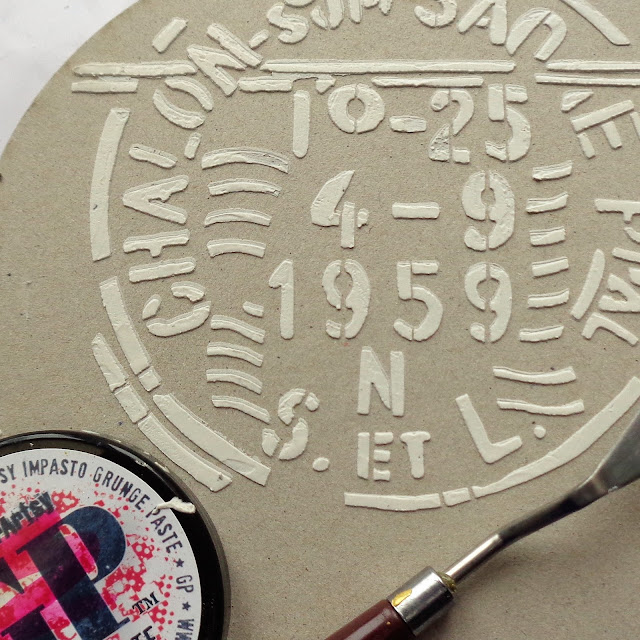 To make the pop out strip I just repeat stamped the bingo card and tape measure - both really easy to line up freehand. 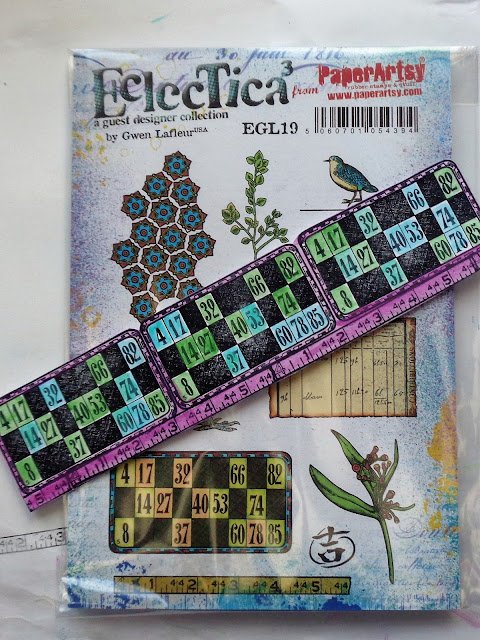 Paint it with the same colours as before. 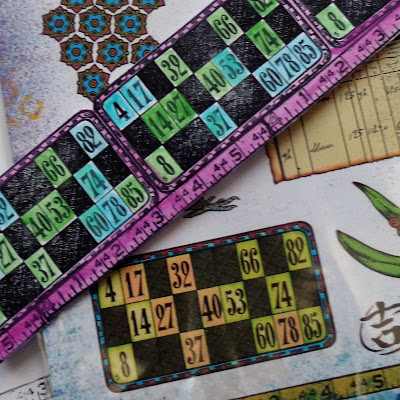 I've then just lined the edges up to the sides of the tag and folded it. The image fits the width of the central fold exactly. 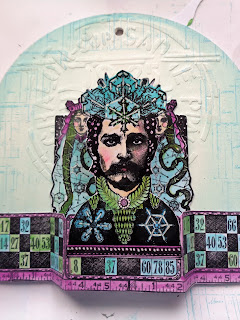 You can see the depth of the fold here. I made it so the two long images fit behind and the owls (minus a few tail feathers!) fit at the sides. 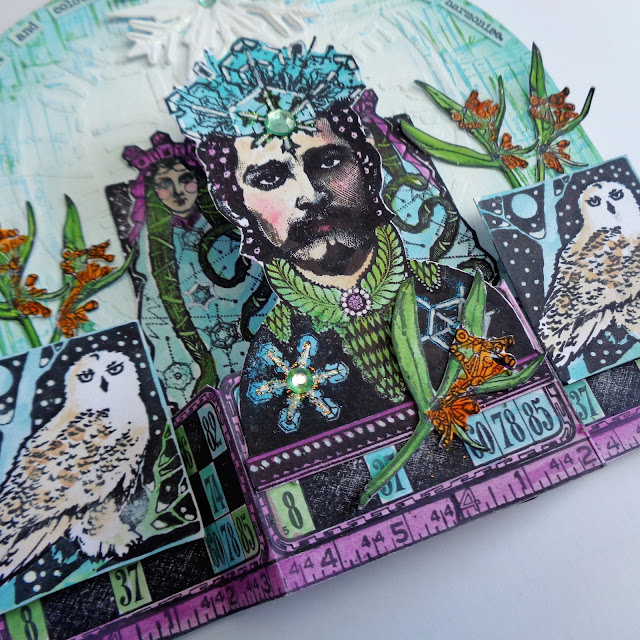 The tag was a bit of a stark white so I rubbed in some blue paint and added stamping in paint round the edge. 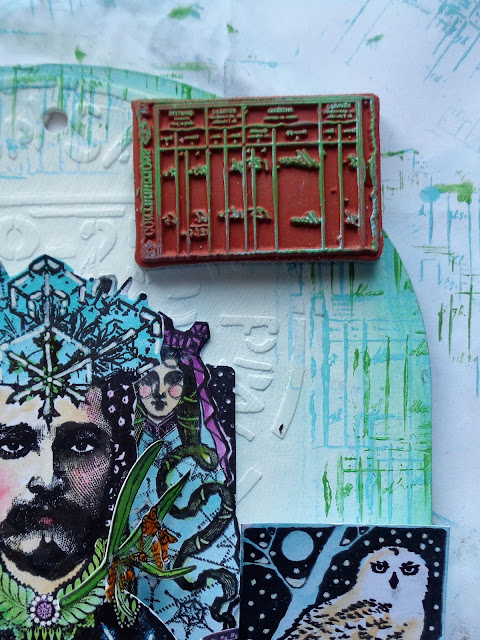 The blue/green colours match the colours used before. I like this sort of design stamp - it's not too dense but the colour is still clearly visible. 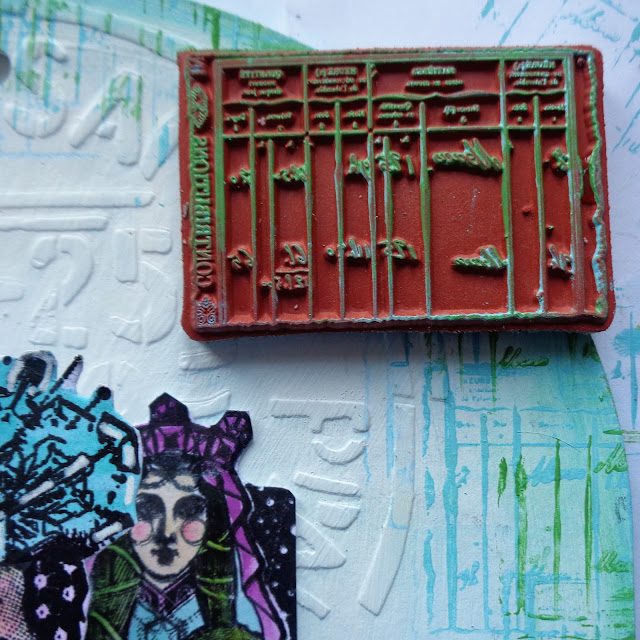 I then went for some foliage, a bit fiddly to cut out but worth it. The orange is a good contrasting colour. 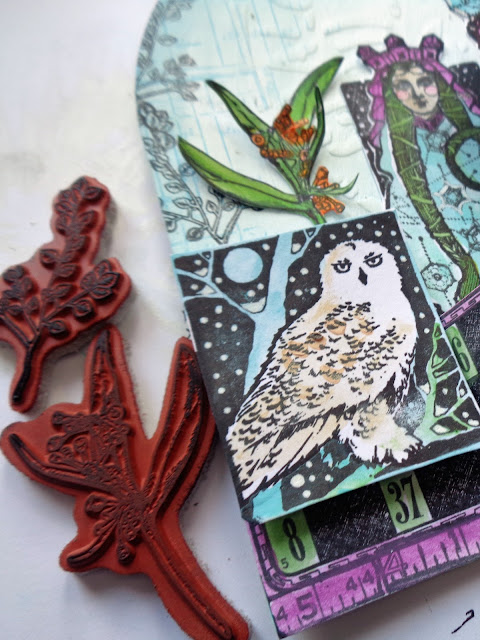 The Alison Bomber set I had didn't have a quote that fitted perfectly so I just took some words from two separate stamps and put them together. 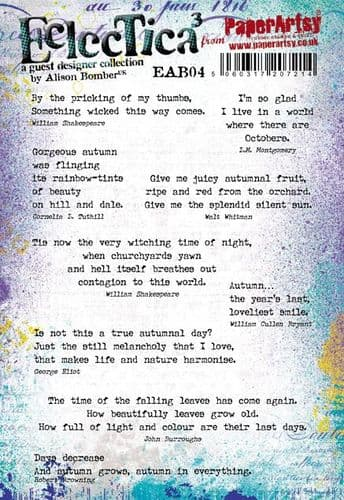 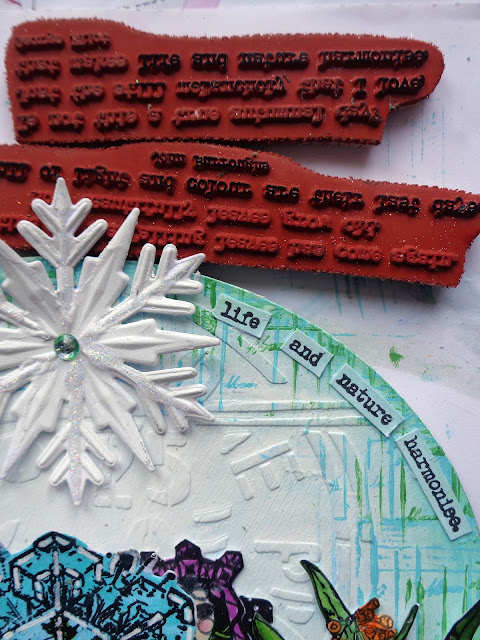 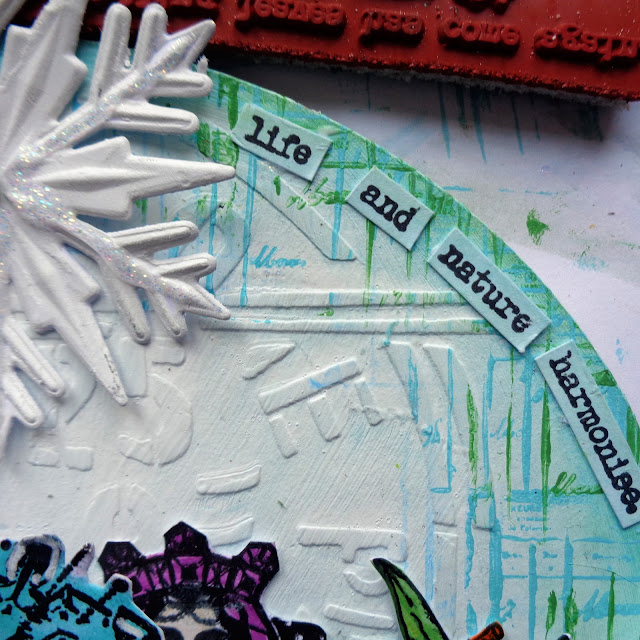 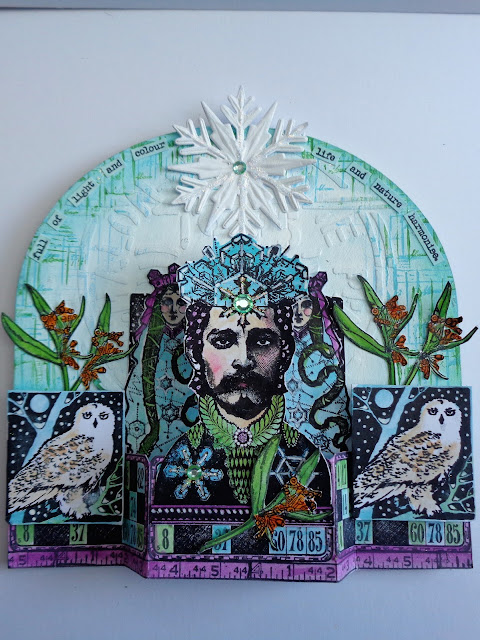 As you can see, I didn't use all the Lynne Perrella images that I stamped. Originally I was planning to make a Christmas frieze for the mantelpiece with bits sticking up here and there but decided it might be too much of one designer for a mash up post. Also I didn't like the red and purple colours together when I'd painted them. Creating this tag allowed me to introduce more of Gwen's stamps as well.
I was also thinking of a folded pop up card sort of thing (I've got pop ups on the brain!) but the main image was so clear and full of impact I didn't want to fold it or cover any of it up, hence I placed the other images at the back and to the sides.
As often happens, what I started off making evolved into something else, but I think that just shows how versatile all these stamps are.
Helen
A Splash of Colour
Posted by PaperArtsy at 19:00

I do like that bloke. This is deliciously gorgeous. Great combination of the different designers. Hugz

Those vivid colours are magnificent, Helen, and I live the words around the edge. Fabulous.

Helen, this is so very wonderful! I love your gorgeous color palette and the dimension of this piece. Every detail is so clever and beautiful. xx, Autumn

Thankyou for sharing Helen, i loved how you used Gwen's bingo card as a base and how cool to give this some 'stand out' dimension!! Awesome effects!

Thanks Helen. Lots of possibilities to tweak your fabulous ideas. X

Thanks Helen. Some great ideas that can be tweaked and borrowed. Great piece, thanks. Xx