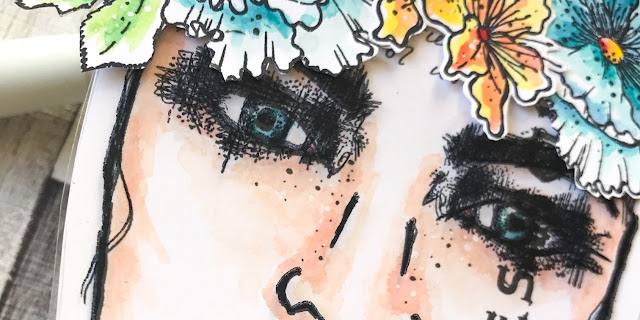 Hi everyone, it's Keren Baker with you today, and I'd like to share with you a little notebook or journal that explored my thoughts on how we are hinged to our emotions. Are our emotions 'us', do they control us, or do we control them?
As soon as I saw France Papillon's stamp set, FP002, I knew I wanted it for this Hinged topic. My inital thoughts were to do a 'flip flop' album so the face would open out in different ways using hinges on each quadrant of the face. As ideas began to surface, I decided to focus on the way we are hinged to our emotions and so it became more about the faces and less about the hinges. 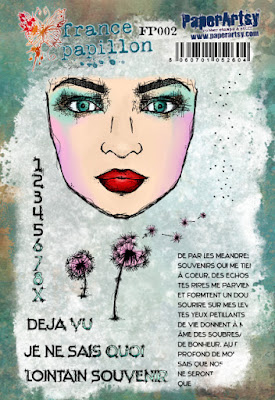 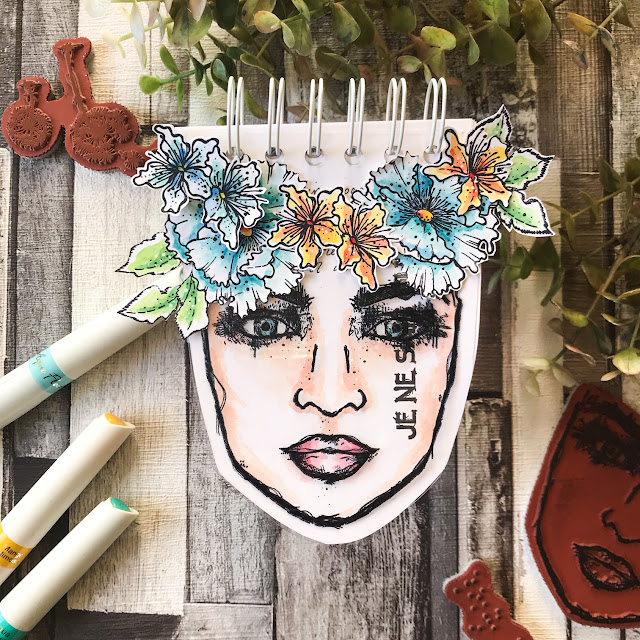 I thought it might look odd to have a spiral hinge emerging from someone's head, but it turns out, it looks rather normal; at least to me! I wanted to play around with how we saw each face, so adding portions of faces and utilising vellum and acetate. The front cover is actually stamped acetate. Because the pages move slightly, you get a lovely dimensional effect from the stamped image below. I haven't done any techniques other than using water-colour pens, alcohol ink markers but have tried to use colour and words to give the project depth. 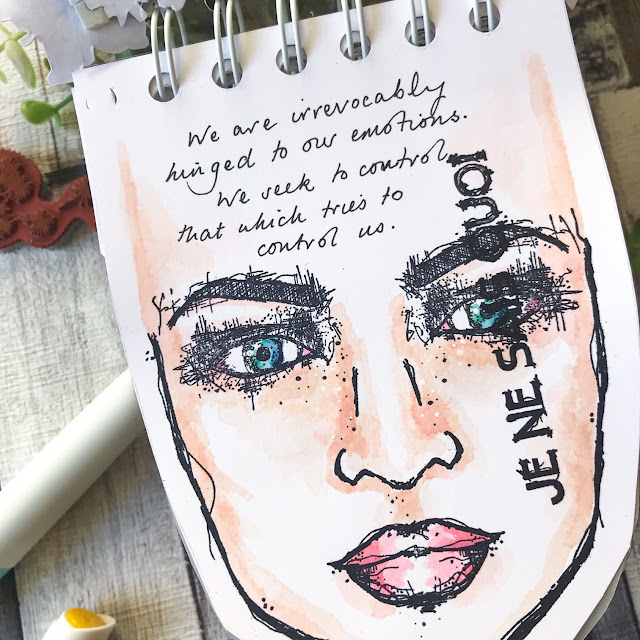 France's beautiful face image changes depending on how you treat it. I had lots of fun adapting each face to the emotion I was exploring. The only other set I used was Elizabeth Borer's EEB08 to add soft flowers to the front cover. 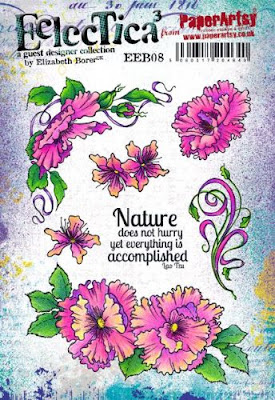 I'll go through each face now, commenting on how I evoked the emotion rather than how I created it, as it's fairly self explanatory. It's easy to imagine that we're a blank slate, when in reality, we're a complex combination of emotion. Vellum gave the translucent look I was going for. 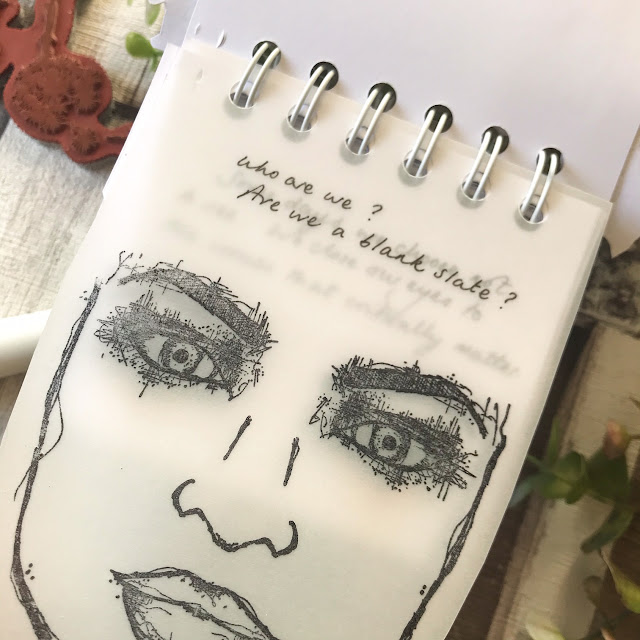 Some days I feel like we blot out emotions, as if we're closing our 'eyes' to not engage and feel and see those things that are so important; whether they're the issues of the day or just those things and people that really need our attention. I was going to make the eyes look like they were closed, but instead ended up with them looking a little vacant- which fits in so well. 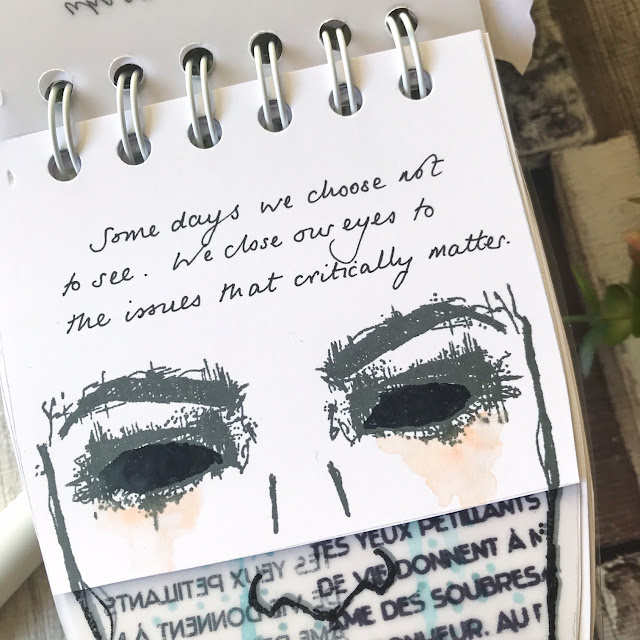 France has cleverly designed a stamp that puts words on half of the face. As I was thinking about how words can crowd and stifle (ok, not strictly an emotion, but it fits with the theme of being hinged to something mentally), I wanted the words to be everywhere. I decided if I used vellum and stamped on the reverse, it would fill the opposite side of the face from the back. 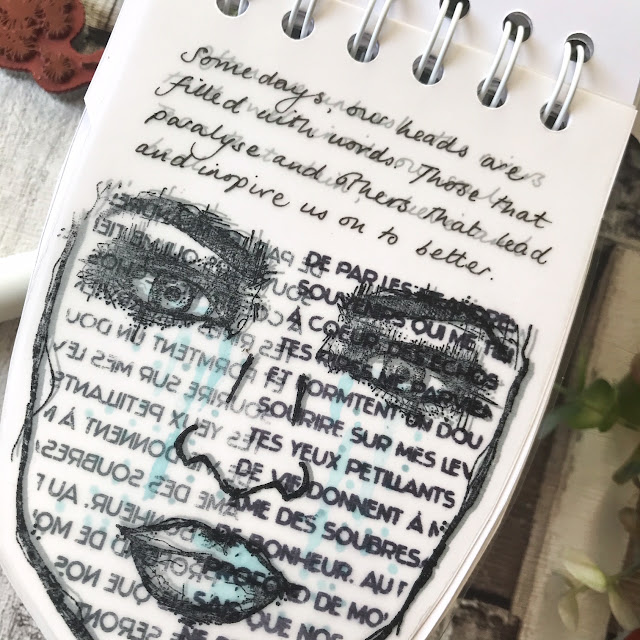 I love how the vellum gives a glimpse of the next page. This next one is sorrow and pain. I wanted to use another image in the set; some dots. I just masked off the eyes and made sure the tears went in the right place. I added the tears into the eyes; overflowing from inside. 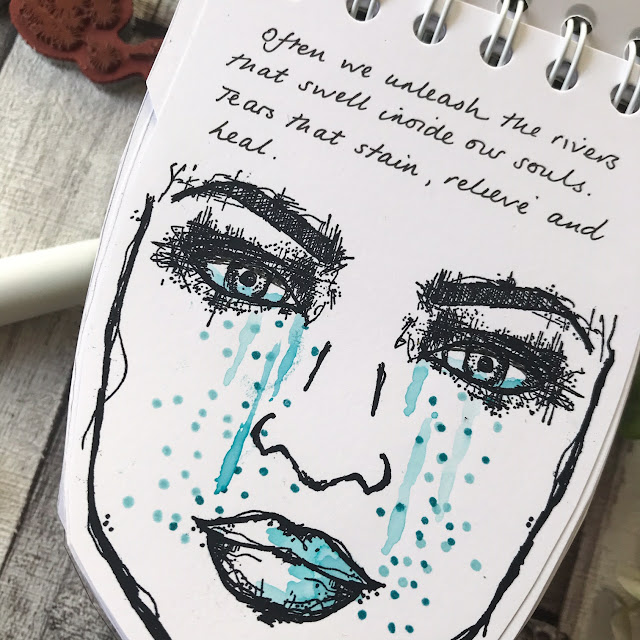 Next I considered envy; the snare of compare. I wanted to signify how envy can stunt and reduce us, so cut off a section of the face too. I found it fascinating how stamping in different colours gave a different emphasis to each face. 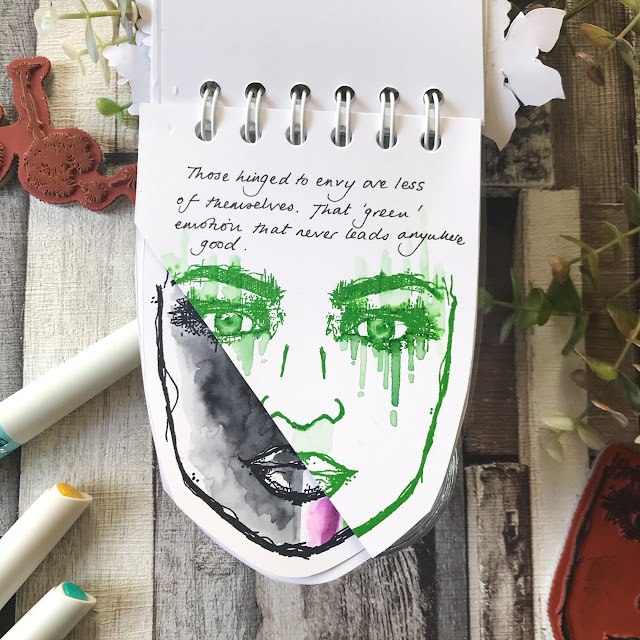 The next face really resonated with me. I was watching Anna Paquin's powerful depiction of Irena Sendler, a Polish Social worker in Warsaw responsible for smuggling nearly 2,500 Jewish children out of the ghetto. (the film is The Courageous Heart of Irena Sendler). The bravery of so many at that time- trying to keep others cheerful whilst ignoring the fear and shadow of grey within. This can also speak to the inner battle so many face, fighting their own innermost struggles. 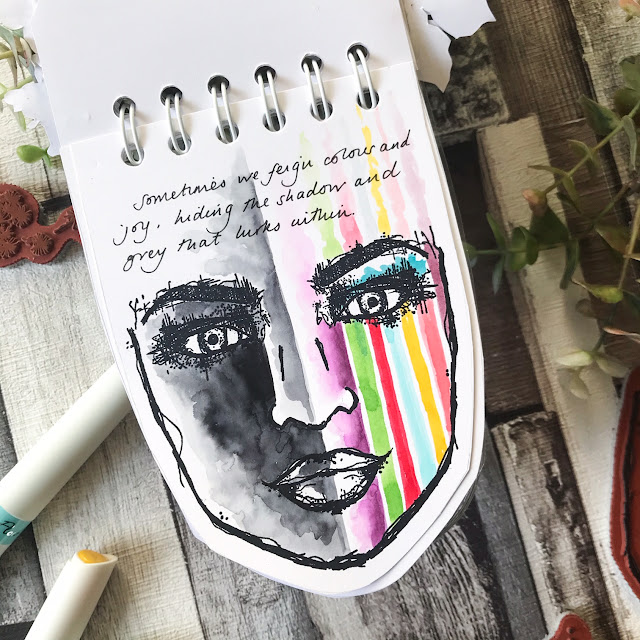 Anger next. An emotion that really seems to have a grip on some; not allowing them to choose wisdom and wreaking destruction in its path. 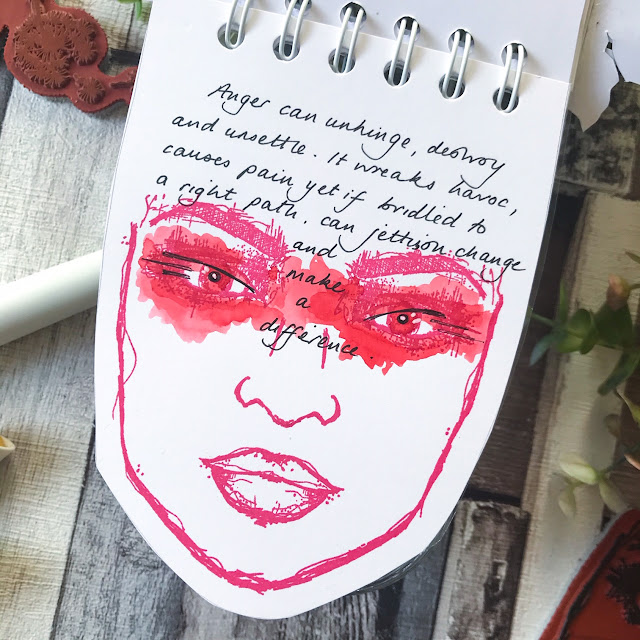 The last face I split into two; using acetate as a cover, 'hiding' our inner-most beauty.. 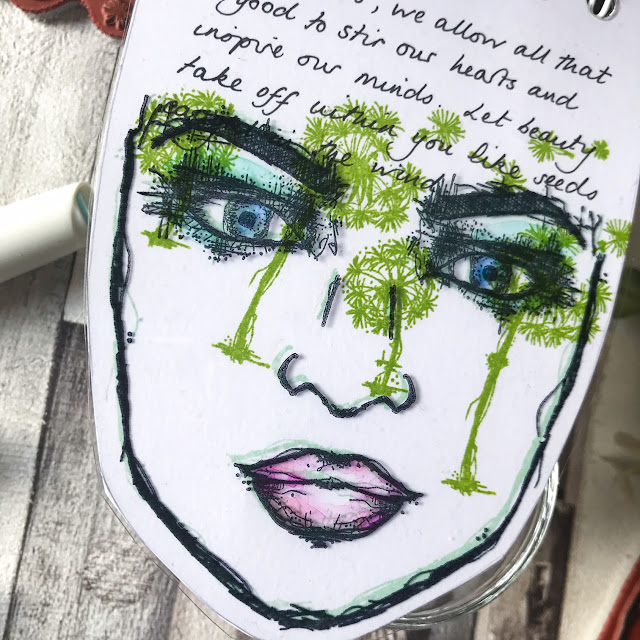 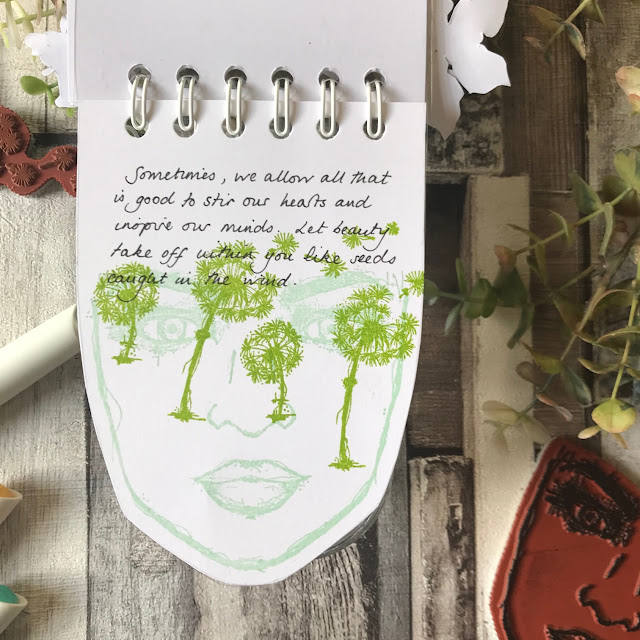 Here's a quick flip through... 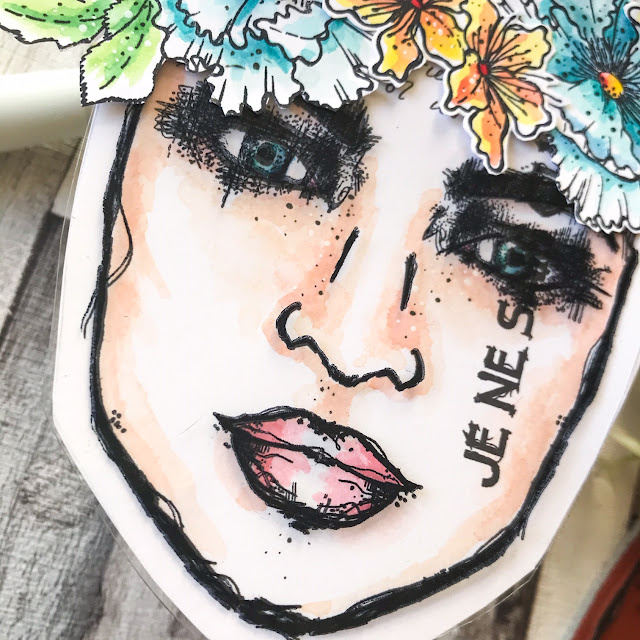 I really enjoyed thinking through emotions and their impact upon us. How we can be hinged to them and how we are impacted by them. I would have loved to try different hinges to match the emotions. There's always a next time. I am definitely using this stamp set again and again!
Hope you get the chance to explore different emotions with journalling or art.
See you soon,
Keren x

That's amazing Keren.... I adore this!

Keren, this is such an amazing work of art, evoking such feeling! Amazing design.