Today I’m working with a Chunky Hanging Board, these are great substrates to use and work so well with Fresco Finish Paints. 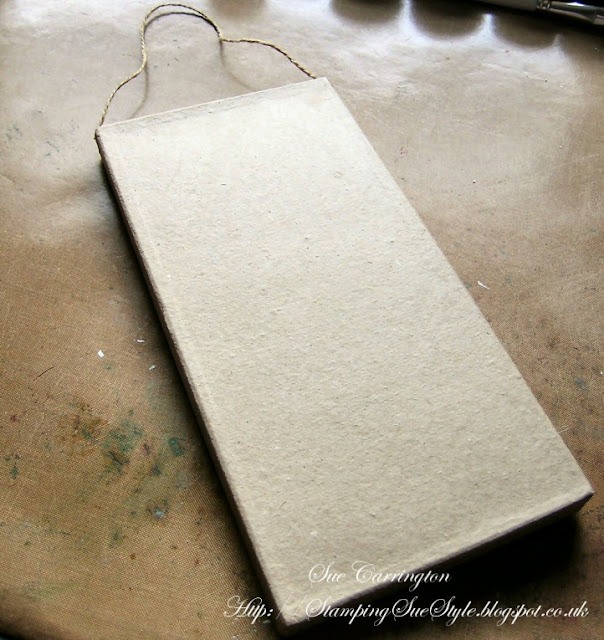 To create some texture I cut some diamond shapes from cardboard and pulled some of the top layer off.  I used my pokey tool to make this a little easier. 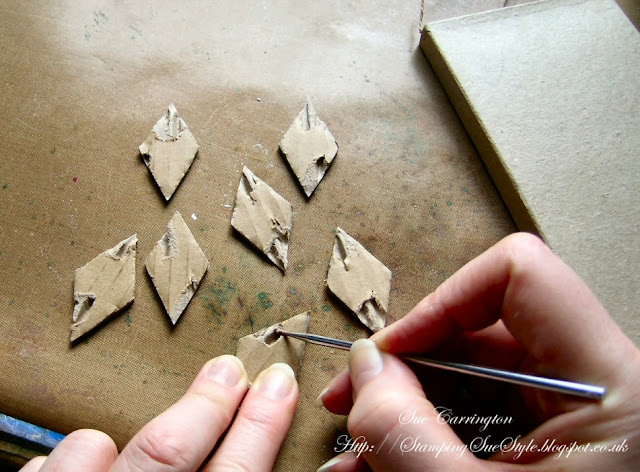 I then glued the diamonds to the board, cutting some in half. 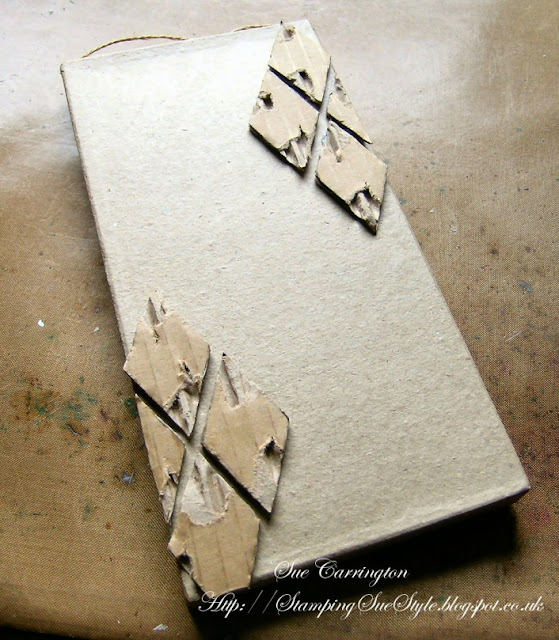 I started to paint the board white with Snowflake and then decided to add some more texture with Grunge Paste.  (I often do things in the wrong order)! 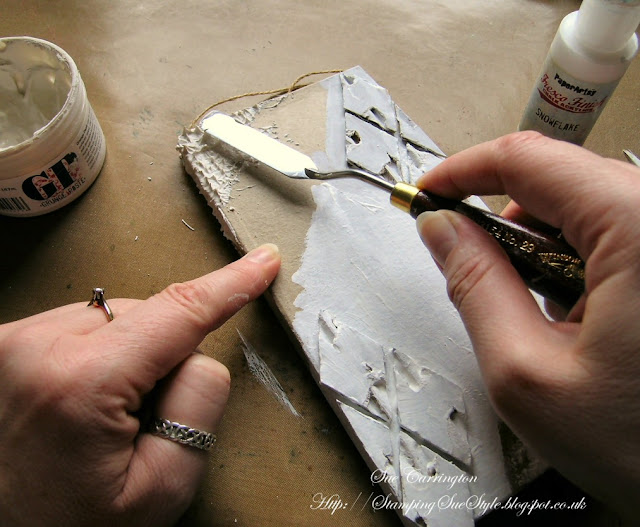 I dried the paste with my heat gun, and then finished painting the whole board with Snowflake. 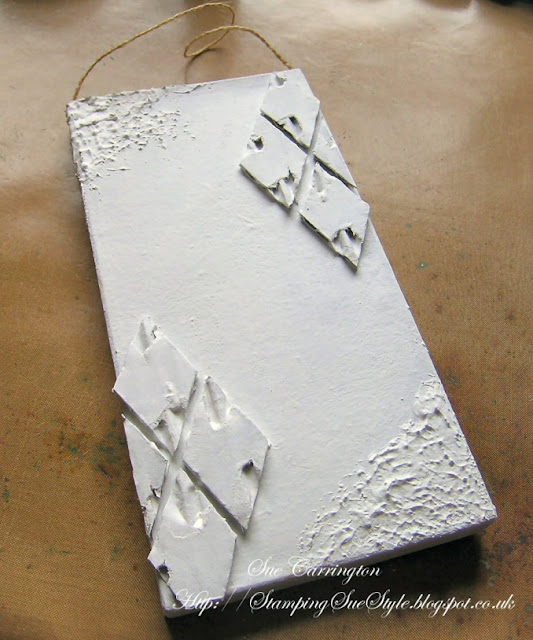 I then gave it a coat of Vanilla and once dry a coat of slightly watered down Guacamole. Guacamole is an opaque colour but by adding some water this allowed the Vanilla to show through. 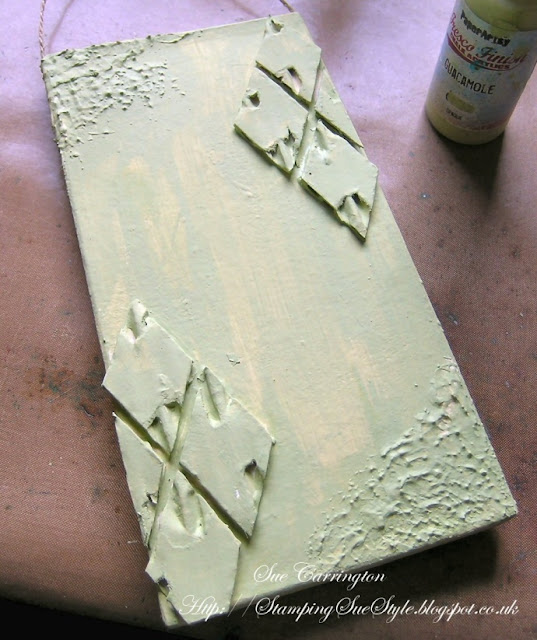 I used the Mini Garden Gate stencil with Tinned Peas, I use DIY masking tape to hold the stencil in place and also mask off areas I don’t want to use. 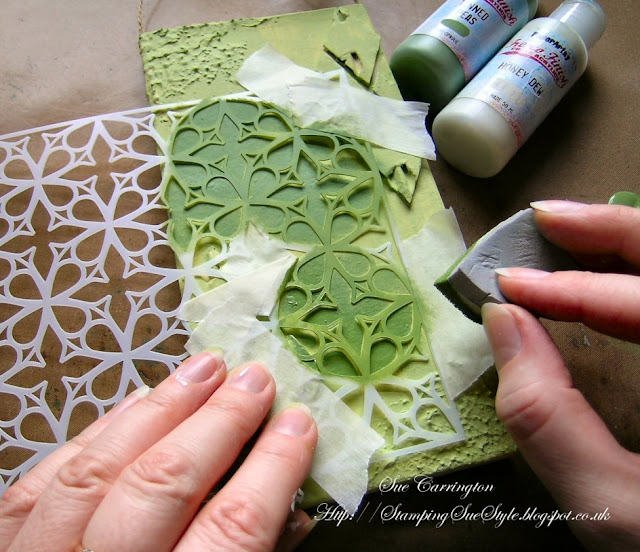 I then went over the top with Honey Dew, moving the stencil slightly to create a shadow. 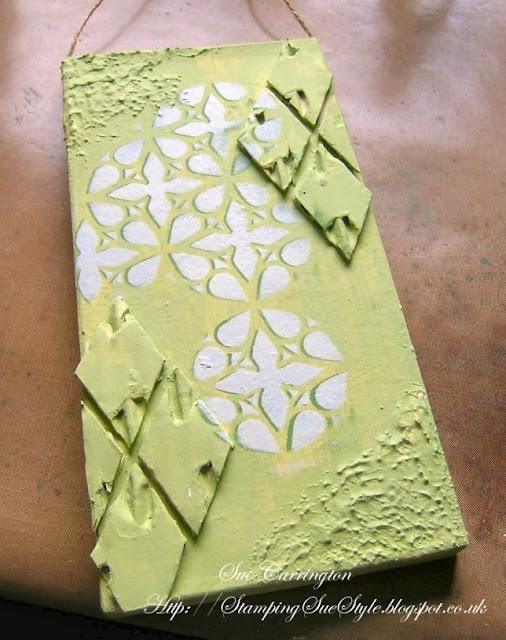 The next layer is Hey Pesto and as it’s a translucent the layers below show through. 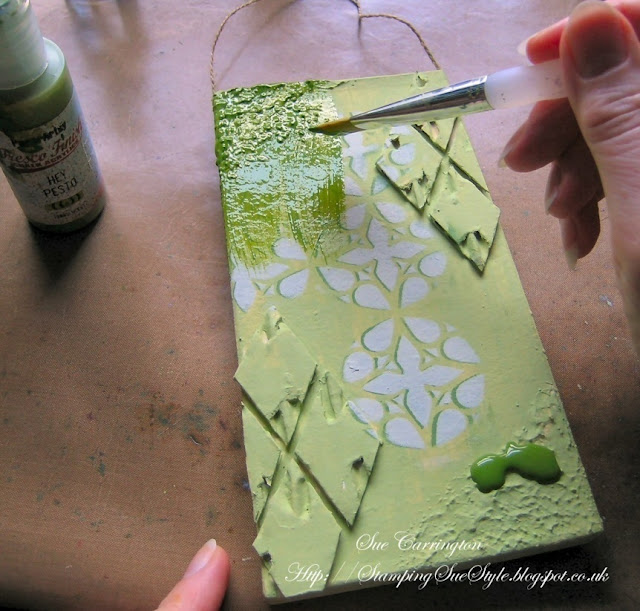 I put some Blood Orange in a mini mister, roughly 1/3 paint to 2/3 water. I didn’t want it to be too thick. I then sprayed it over the board, letting the colour get into the dips.  I’ve then used some Cut N Dry with Hyde Park around the edges. 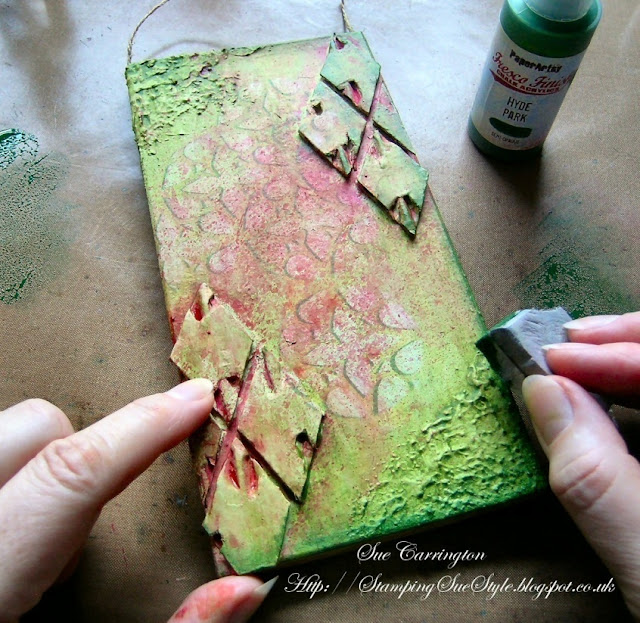 I’ve used the ESN06  and ESN05 sets and stamped without an acrylic block over the board. I’ve used the text from the ESN05 set to stamp on top of the diamonds. 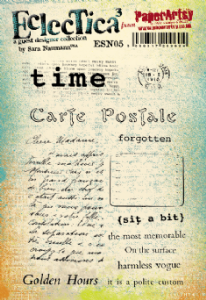 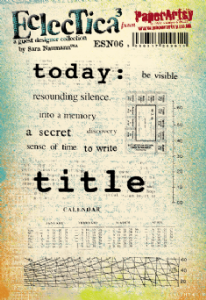 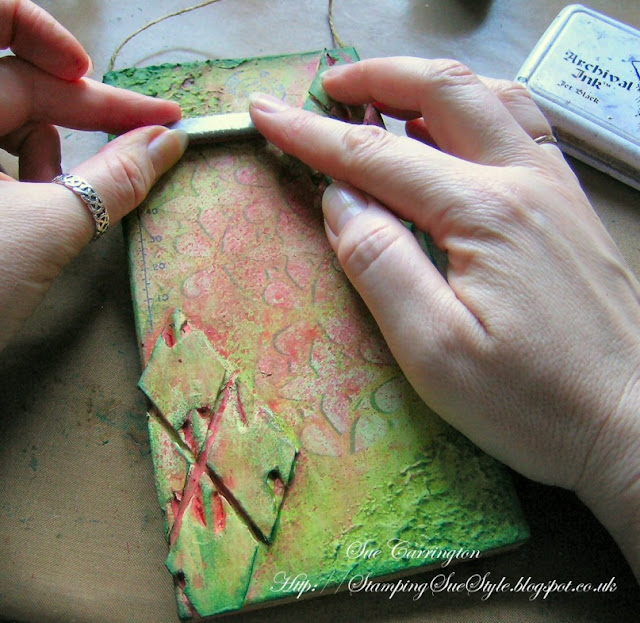 For the flowers I’ve used the ELB01 set with Vanilla, SmokedPaprika and Blood Orange and stamped onto black card. 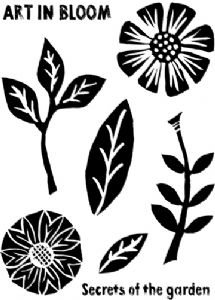 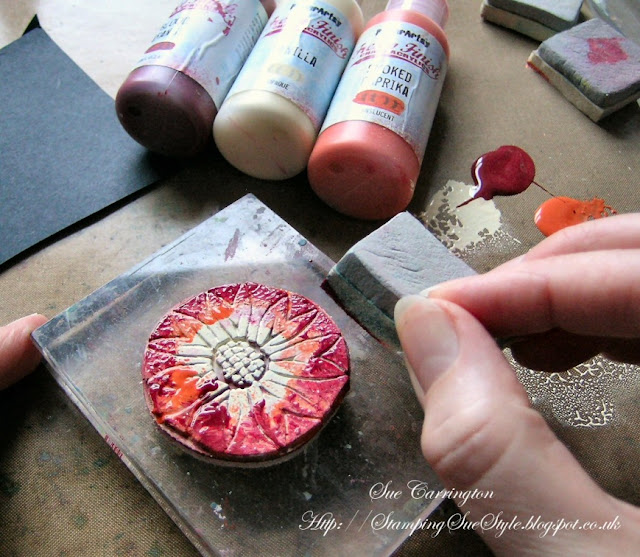 The colours blend together beautifully when you stamp on to the card. 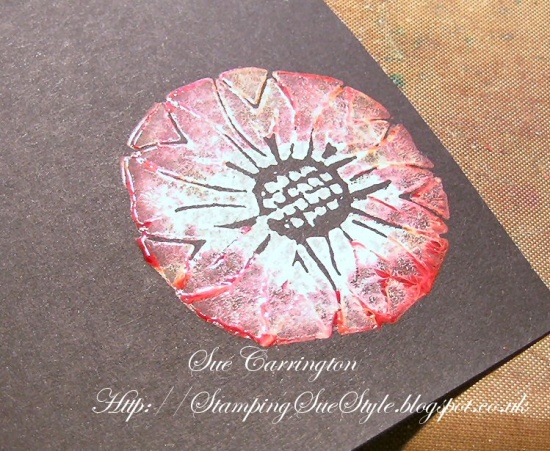 I stamped several flowers and then cut away parts of the pattern leaving a spiky flower which I thought looked like corn flowers ! 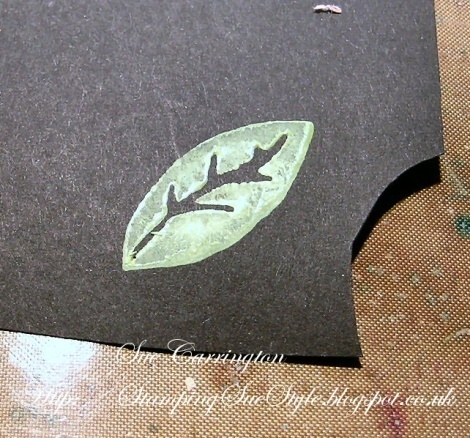 The leaves are from ELB01 and ELB02 sets and I’ve used Tinned Peas and Guacamole and again stamped onto black card and cut them out. 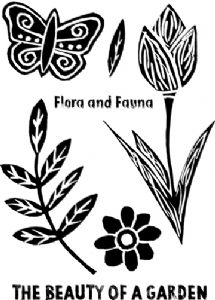 Before I started to assemble everything I brushed around the edges and over the raised surfaces with Onyxite Treasure Gold and then Florentine Treasure Gold. 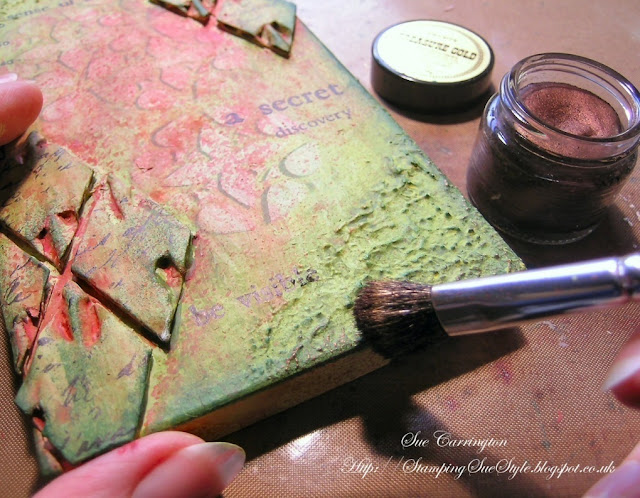 I felt it still needed something else so decided to add the text from the ELB01 set.  I’ve masked off the word ‘Bloom’ and stamped onto some metal using StazOn Ink. I find Stazon works much better, than Archival Ink, on shiny surfaces such as metal as your stamp doesn’t slip. 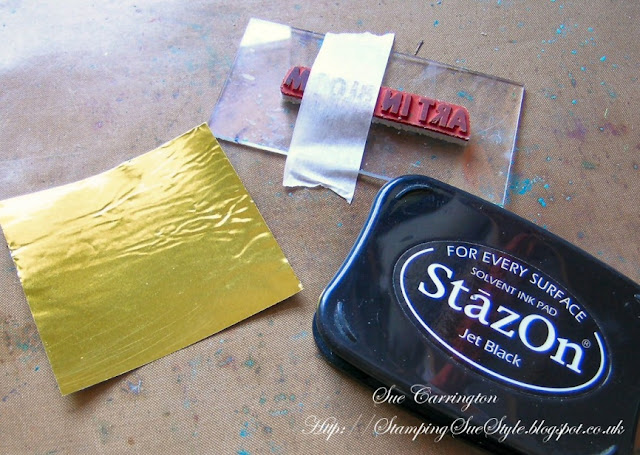 I cut the words down and used a metal working wheel around the edge. 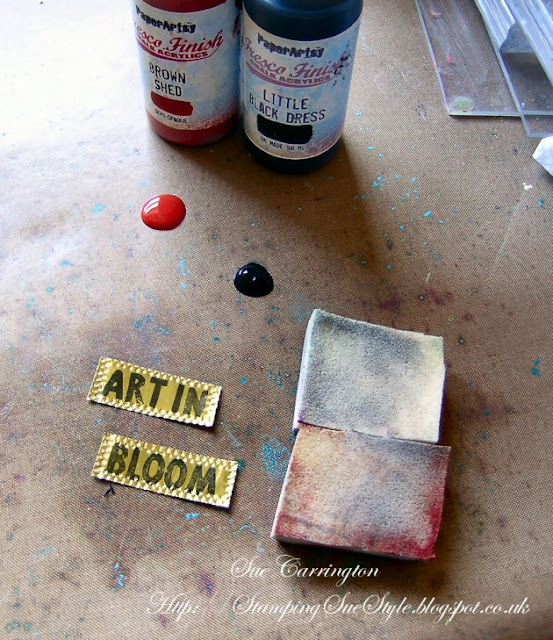 To distress the metal I’ve used Brown Shed first and sponged it around the edge with Cut N Dry. I’ve dabbed the excess paint off with some kitchen roll. 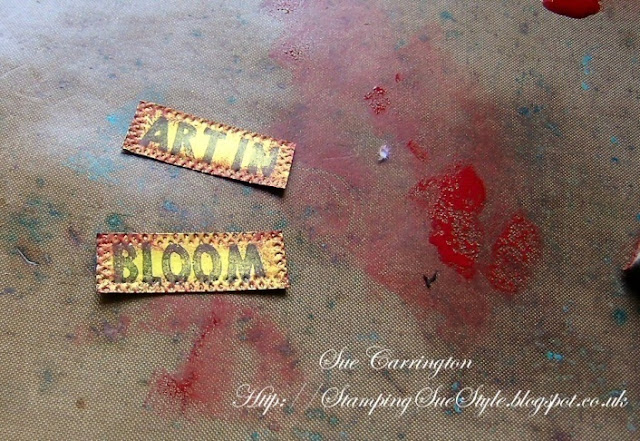 Then I went over the Brown Shed with Little Black Dress and dabbed this off too. 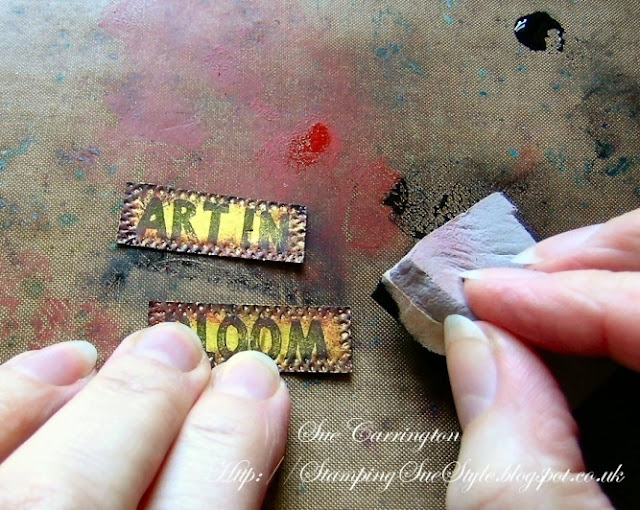 I’ve used Multi Matt Medium to stick everything down, including the metal. 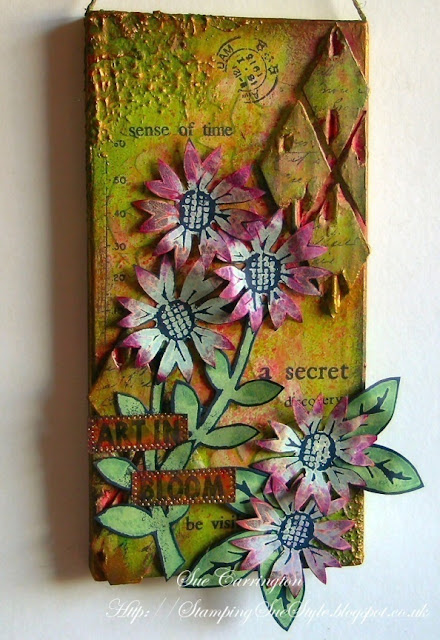 Here’s a close up so you can see the texture and the flowers. 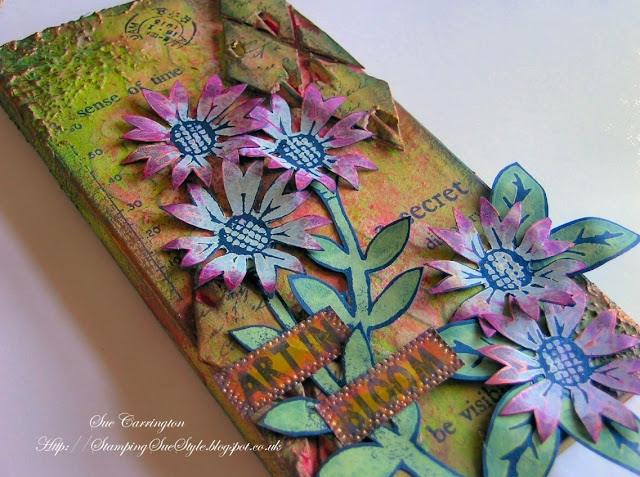 That’s all of my projects for my first week, I’ll be back at the beginning of June !

Leandra Says: That flower always looks so different when it is trimmed that way! Fabulous background, the colours look so pretty, you've achieved great depth, and spraying paint into the dips too was a great idea. Thanks for a fantastic week to kick off this semester Sue!


Have you been inspired by Sue's projects this week, if so you have until Sunday to upload/share your own creativity. Simply click HERE.

wow, Sue that looks amazing - love the diamonds, and the added texture the GP gives. The flowers are gorgeous!!

just gorgeous Sue. love your idea with the corrugated diamonds and your colour scheme is a dream.

Looks Fab! I love the diamond idea too! X

Love all the greens and the corrugated, looks fab Sue.

Wow, so much texture, it's a gorgeous piece! The flowers look beautiful & the background is amazing, love the diamond cut outs.

Gorgeous colours, fabulous textures and wonderful composition. Also your step by step instructions are excellent, straightforward and helpful. Thank you so much for sharing your skill. Julie Ann x.

Oo this is gorgeous Sue, love those flowers stamped with paint on the black card. I really like the depth of colour on the hanging board, really yummy and rich. Michelle x

Love all the textures and the bumping technique, lovely piece !

Love the projects you've made this week.
Jo

That's amazing, I love all the colours in layers, and the texture. Beautiful!

Stunning colours and textures!! You have achieved so much depth with all those layers, fantastic hanger!!

OMG. That's a bit of a short comment but do I need to say more. OK. Love all those texture layers and then the colours. Fantastic art

Another little beauty Sue. That was such a genius idea to add dimension with those diamonds.....so simple but so, so clever.

Absolutely stunning - thanks for sharing all the techniques Sue. Nicola x

love the bump techinque here, really like this textured look with the diamonds and GP

Wow Sue..............this is fabulous. I love the layers and textures you have created............very inspiring. Your work is fabulous and I love to visit your blog. THis is a great tutorial too. Look forward to seeing more of this style.

AMAZING tutorial Sue, just love all the texture you've created with the diamonds and grunge paste (need some of that!)beautiful project. xx

loved this piece and just finished my piece,but cant post it as says link is closed, :(
http://www.piddawinkle.blogspot.co.uk/2013/05/lynn-perrella-piece.html

Love the chunky hanging and all the details you shared! The cardboard diamonds are so clever and add incredible texture! Love your mix of colors and mediums!

Absolutely love this project! Thanks for taking the time to share the 'how to' photos.