Bonjour, it's Dounia with you today and I'm here to share with you a 'life map' retracing all the beautiful places I have lived in.

My inspiration for this project came directly from the stamps, Kay Carley's set EKC63. This is a stamp from one of the new sets being release this coming week, so you are getting a sneak peek! It includes a lovely series of three little houses. I love that they are subtly different, providing lots of options. They first reminded me of the architecture from the North of France (I am French) with their ornate pointy roofs, but I do not have any real connection to that region, so I felt a project on that would not really fit the current topic. However it got me thinking about how easy it would be to customise Kay's houses to represent different styles. I have been lucky to live in quite a few beautiful towns and cities with their own architectural identities so I found this project the perfect opportunity to represent my life journey through an illustrated map. 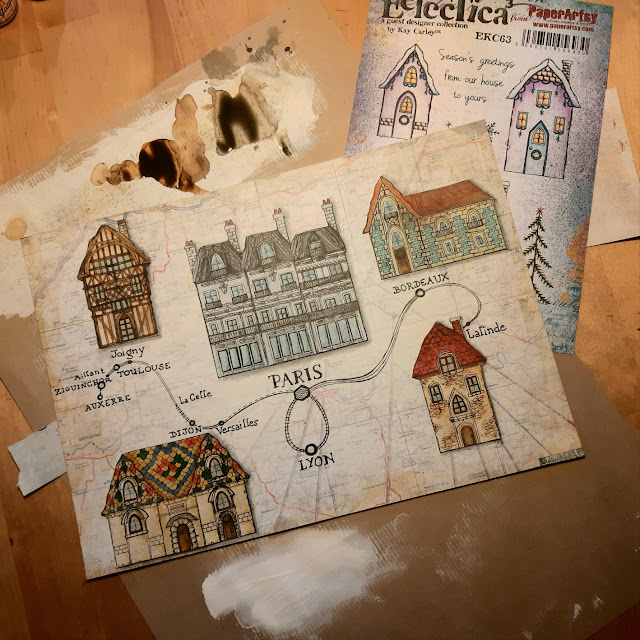 As I intended to keep the houses illustrations quite clean and simple, I needed a impactful background to bring interest to the rest of the project. 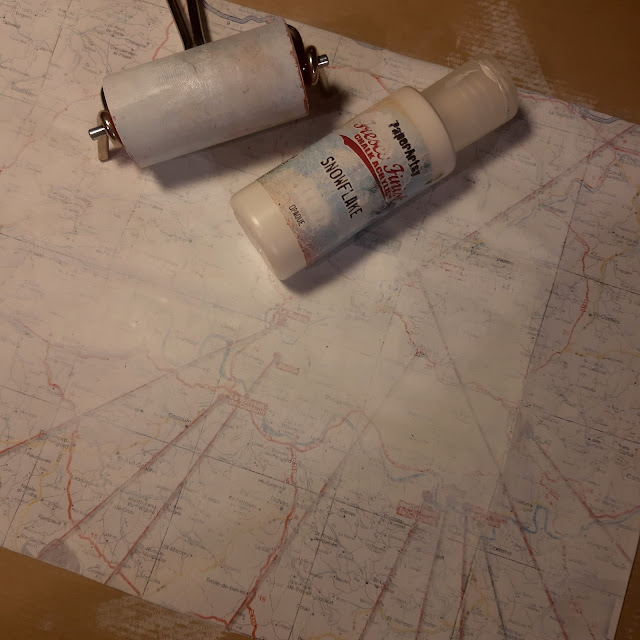 And what better background than an actual map! For it not to be too overwhelming, I lightly brayered some Fresco Finish acrylic paint in Snowflake all over, with a better coverage in the middle where I was planning to put my life map. 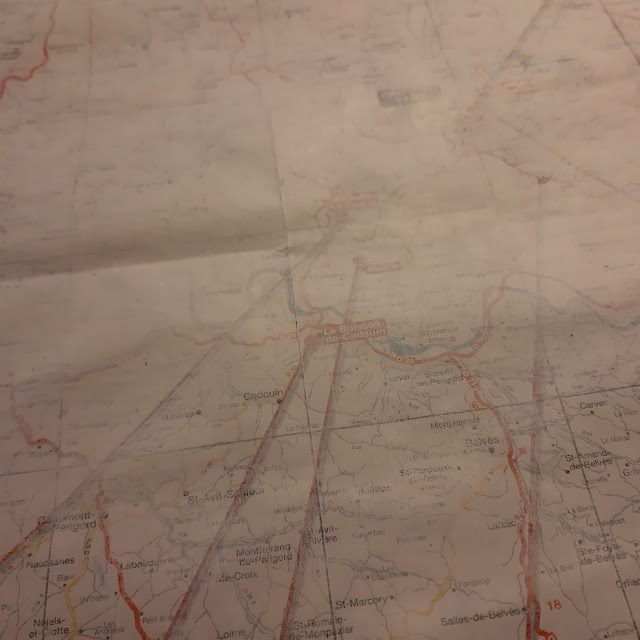 I then started to sketch the map part, choosing a flowing and sinuous line, as it has not been a straightforward journey! I made sure to leave enough space for the houses illustrations. Their size made me settle on 5 illustrations. 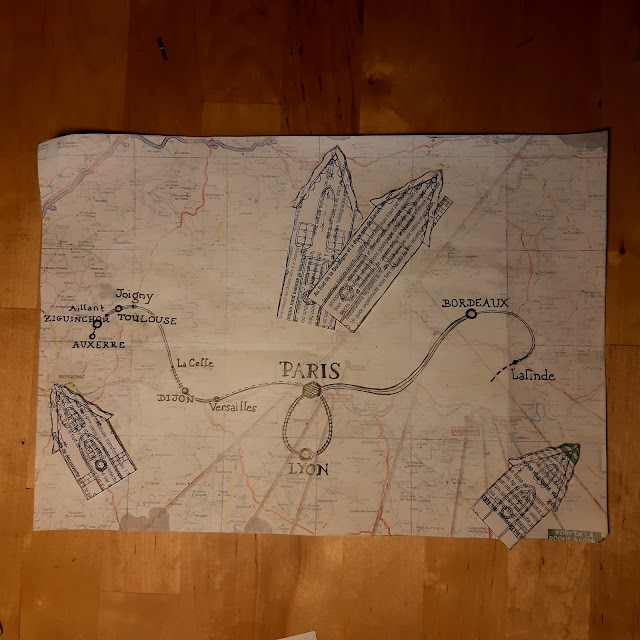 To choose the placement of the stops on the line, I considered which places held the most significance to me, but also which had the most unique and interesting architecture.  I tried to used map symbology to represent the cities and the journey. 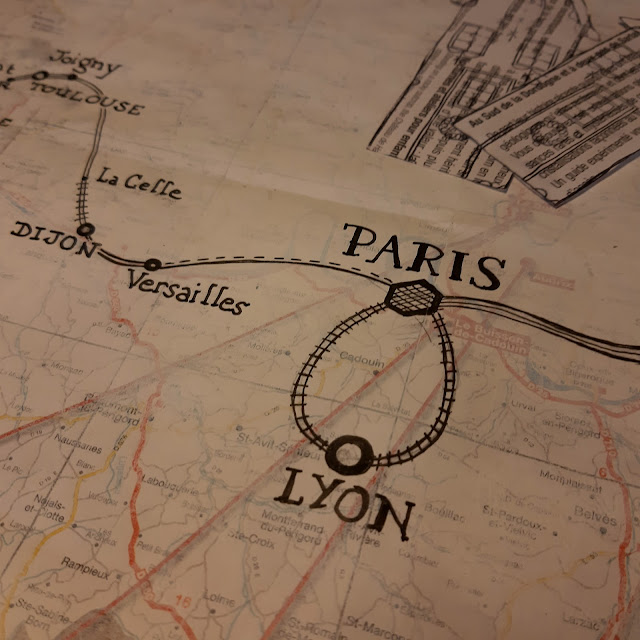 Now for the houses! I decided to create textured backgrounds to invoke stone. My hope was to reduce the amount of colouring I would have to do on the houses. I went for a warm and a cold tone, using Golden Sands and Sleight Blue Infusions. I sprinkled them on my palette then rolled Snowflake paint over with my brayer before applying to the paper. Super quick and simple and I love the result! I feel the residual grains of Infusions really mimic the variation of colour of natural stone. 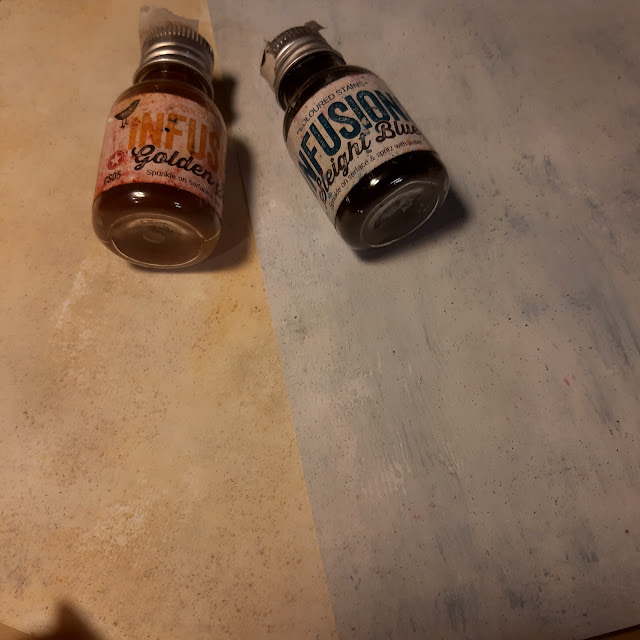 I chose striking references from each city, even if that is not were I actually lived! I spent my childhood in Joigny, a medieval town in the North of Burgundy (founded in 996!). Lots of gorgeous timbered houses have been preserved, more or less elaborate. Some have sculpted beams, some have mosaics in between the beams and they are all different. Here is an impressive example, it was the Bailiff's house. 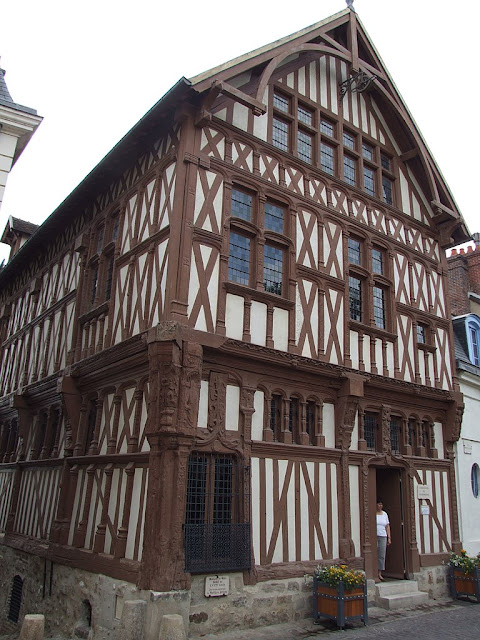 Source
Using this as a reference, I just added a much simplified version of the wood beams. 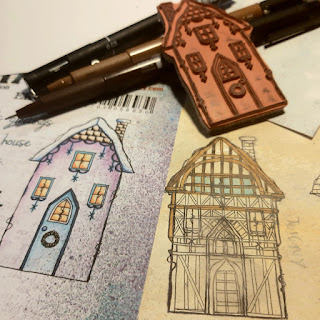 I made sure to recreate the horizontal separation, as it is a very recognisable feature. Thanks to my background, I basically only had to colour the wood! 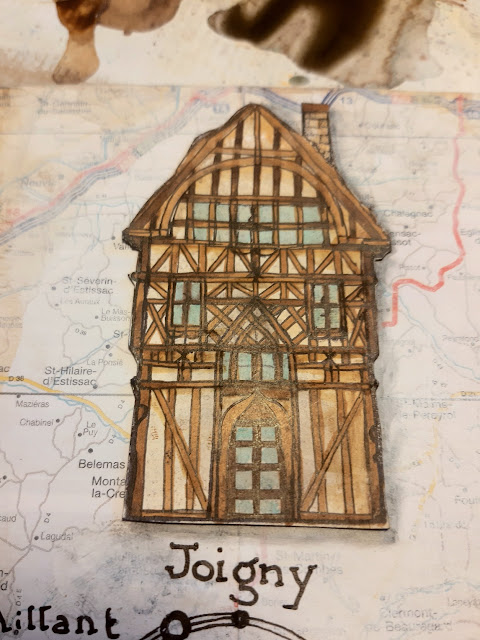 I went to high school a little further South, in Dijon, historical capital of Burgundy and home to the internationally famous mustard! The city mixes a lot of architectural styles but I chose to illustrate one speciality of the region: glazed rooftiles (an overview here). Here is one of the most striking examples: 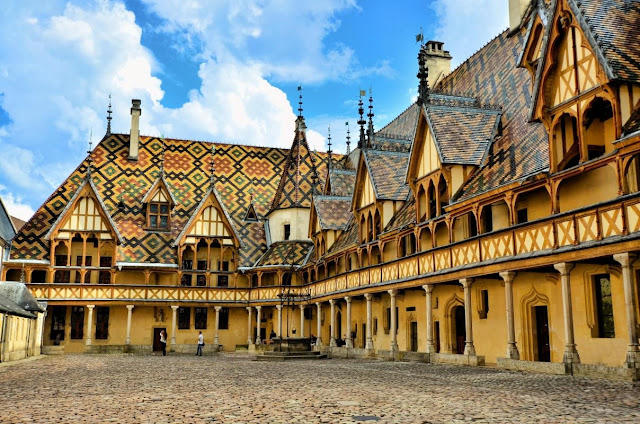 Source
These are the Hospices de Beaune. Founded during the 15th century, it was hospital dedicated to care for the poor. It was active until the 1960's and is now a museum. It is also in Beaune, not Dijon... I therefore chose as reference the slightly less extravagant Hôtel de Vogüe, actually in the city center: 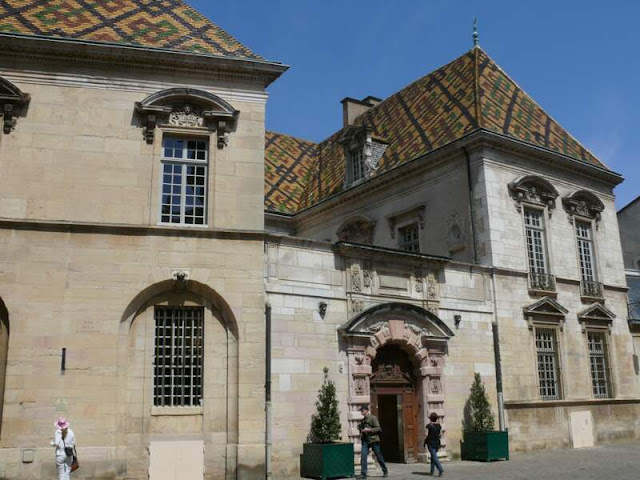 Source
To better showcase the roof, I decided to add a simple extension to my stamped house. I also lowered the lip of the roof to get the traditional silhouette and added some more details around the windows and doors. I had quite a bit of fun creating patterns while colouring the roofs! 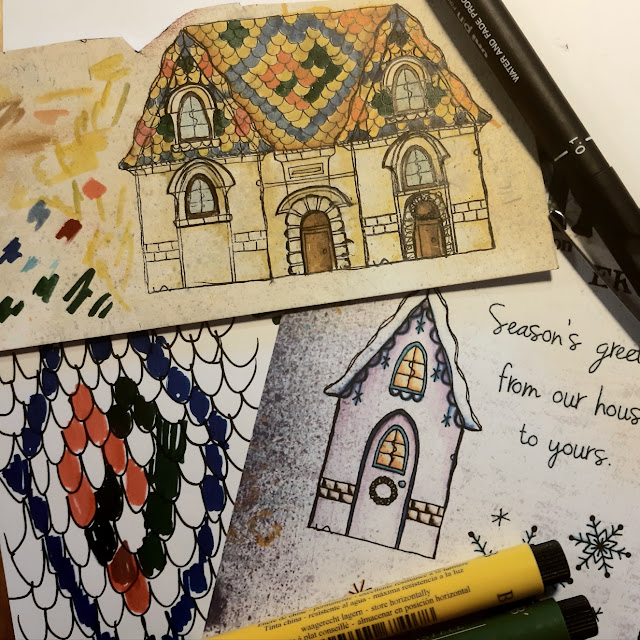 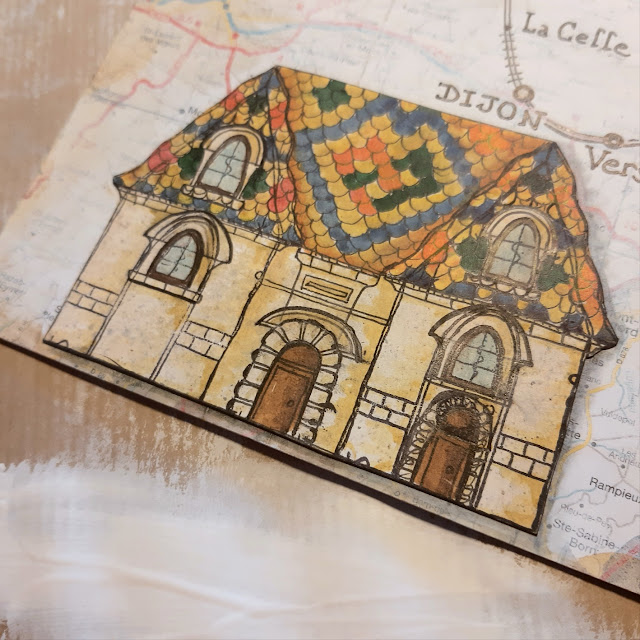 I then went to the capital for University (actually the closest to home!). Paris of course is a crazy mismatch of styles, from Gallo-Roman to very modern, but our collective mind, it is mainly associated with the Tour Eiffel and the Boulevards from the 18th and 19th century. To fit with the stamps, I chose some of the less 'rounded' examples, from the boulevard Poissonnière: 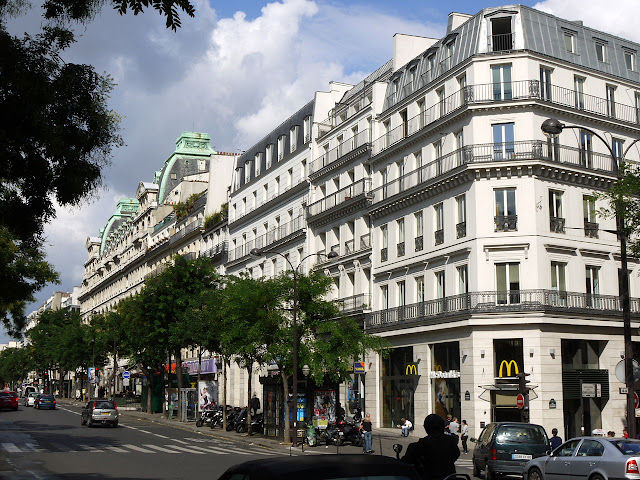 Source
For this adaption, my focus was on recreating the horizontal rhythm of the buildings. I truncated the roofs, added balconies and friezes. It also needed more chimneys! The big doors made perfect shop windows! 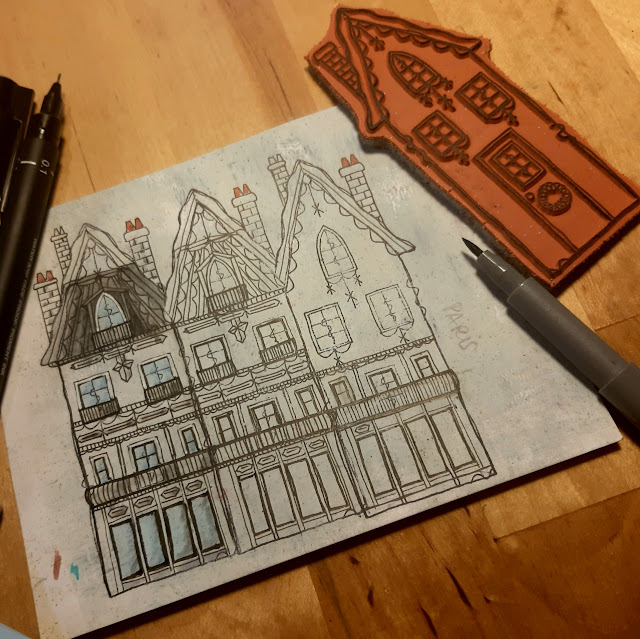 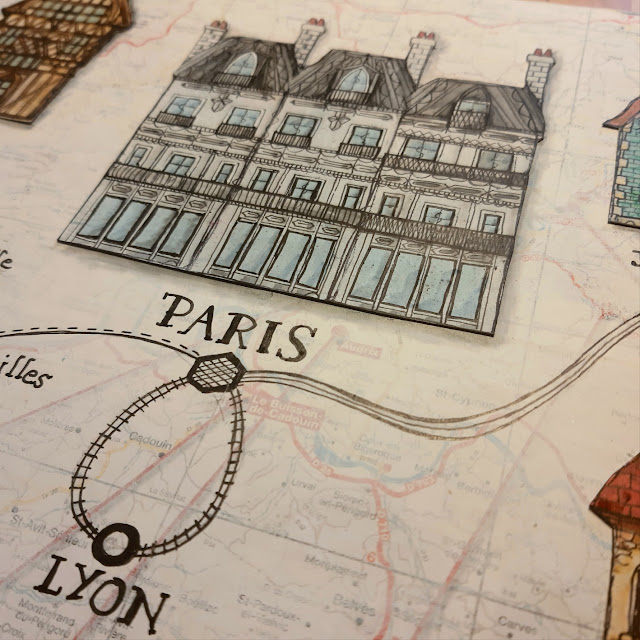 I then fled the grey skies and pollution of the big city to Bordeaux, in the South West of France. The historic port has a very particular atmosphere, aided by the long streets, secrets interior gardens and a building restriction of three stories. The city is well know for its neo-classic facades but those are hard to recreate on small houses! I have been personally fascinated by a series of houses decorated with glazed bricks with a very specific colour palette: 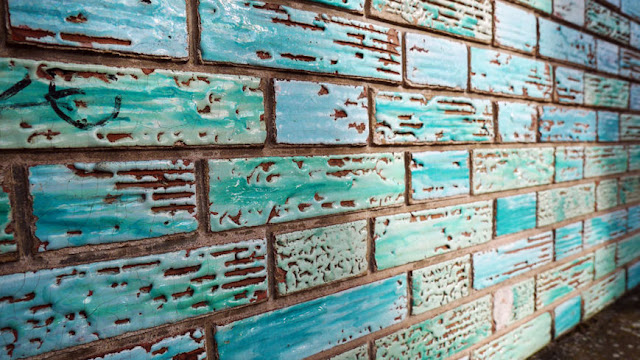 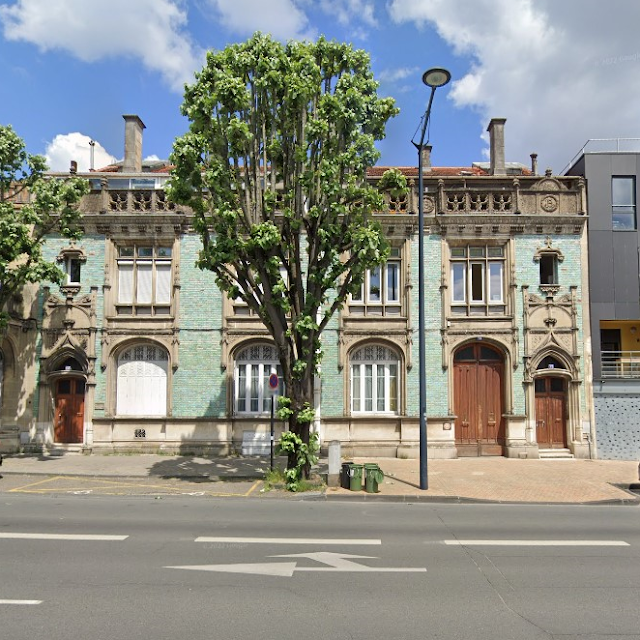 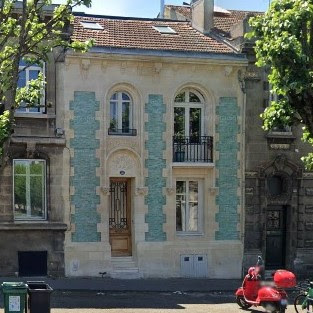 Source: Google Maps
Here I also added an extension, to better show off the pattern and the colour. I mainly focused on recreating the stone/bricks balance, with some added stonework details. It also took me some time to nail the colour! 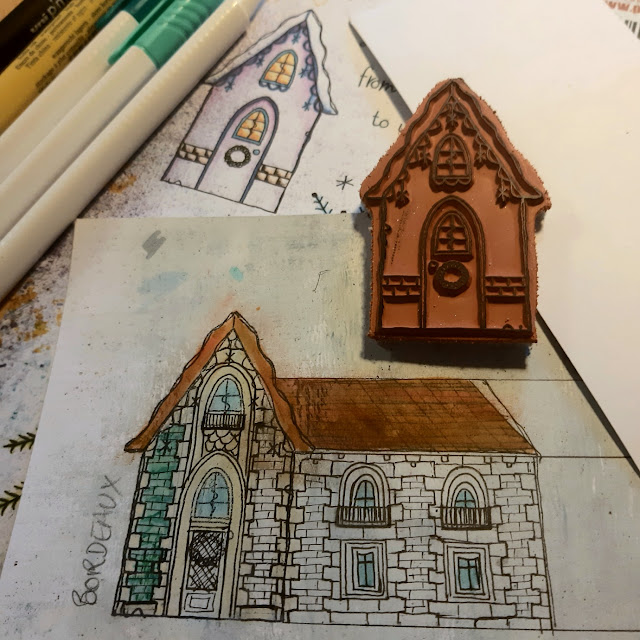 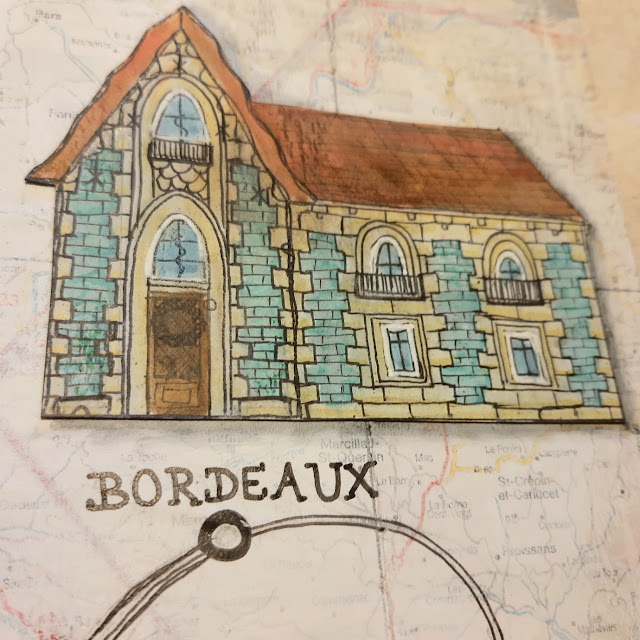 Finally, I joined the PaperArtsy Team in Dordogne and now live in the small town of Lalinde, a former classic bastide founded in 1242 by the King of England. There are lots of reminders of this medieval past among more modern buildings, including my house. Here is a picture giving a good idea of the style. 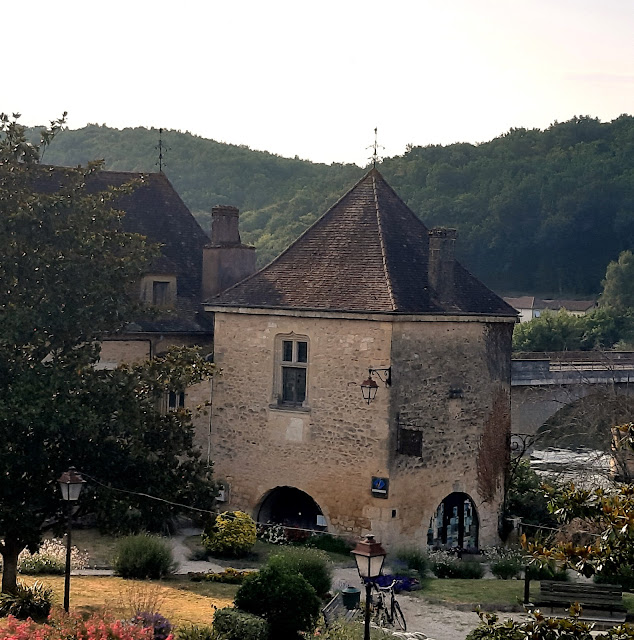 I again lowered the roof and had fun adding the cute detailing around the windows, as well as hints of the exposed stones. Few windows and thick walls to protect from the heat! 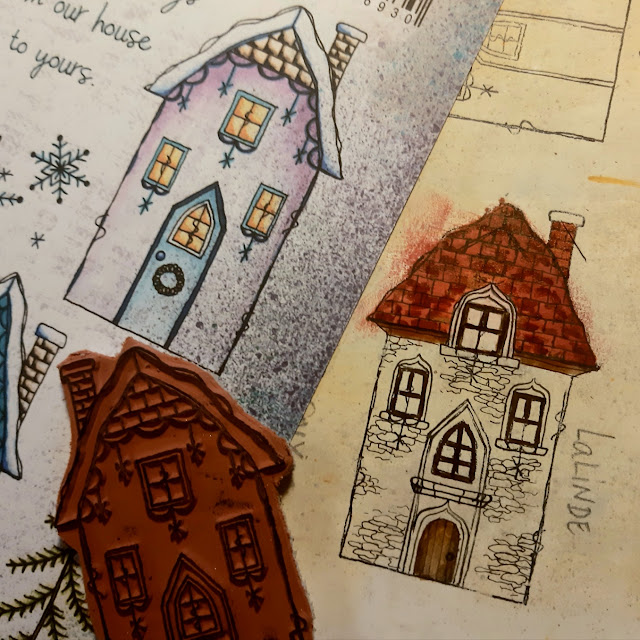 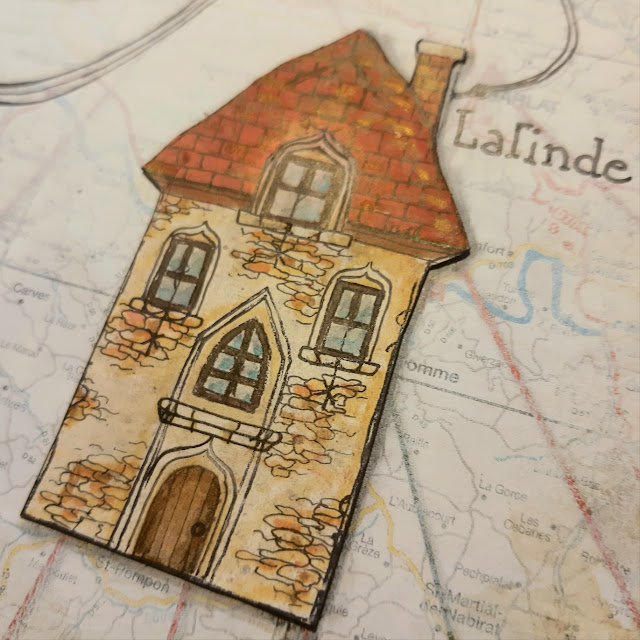 Here are my houses all together. I tried to give them each a different personality through details and colour. I am quite happy with how they turned out! 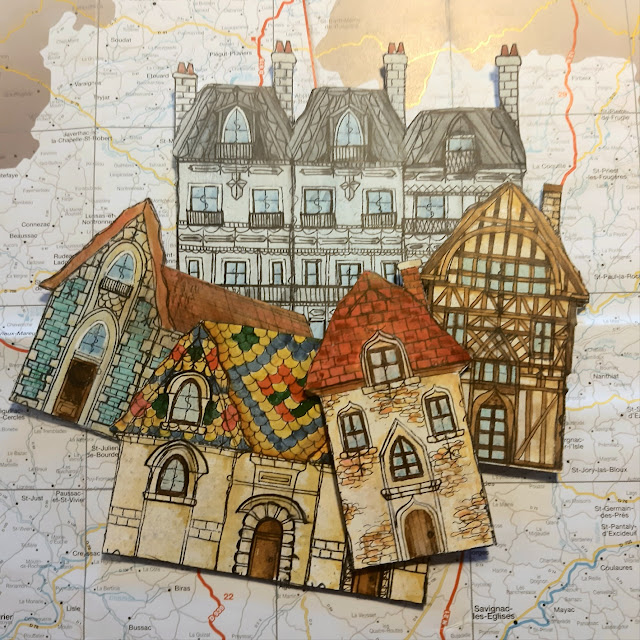 Time to bring it all together! I glued the houses on the map but they seem to just float on the background. Therefore I added some shadows and streets texture to ground them. 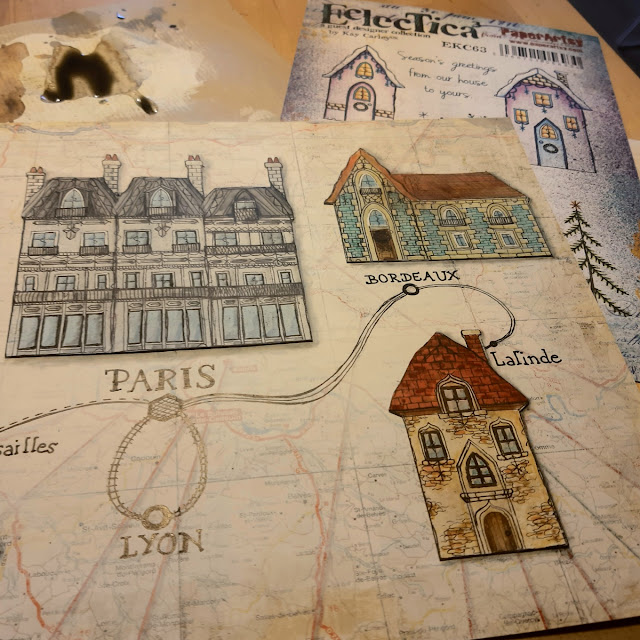 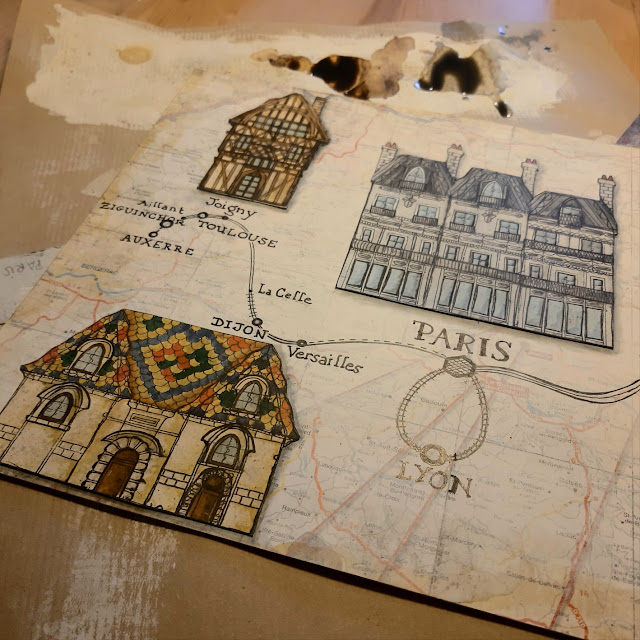 Finally I worked a bit on the edge of the map to make it look more like finished object. I reused the Golden Sands and Sleight Blue Infusions to tie them in with houses backgrounds. 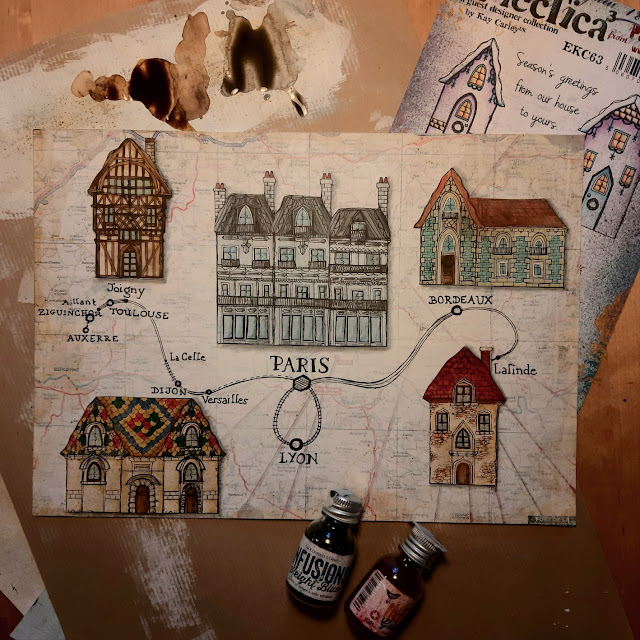 I had a lot of fun with this project. It allowed me to be create my own images with the safety net of Kay's awesome houses. It also pushed me to reflect about my journey and the beautiful things I encountered along the way. The life map could be easily adapted by using another focus than architecture, like fauna or food. Do not hesitate to modify Kay's houses yourself, to recreate yours for a journal spread or a friend's for a personalised card.
Stay creative!
Dounia
Posted by PaperArtsy at 18:45

Beautiful work. Love all the steps to recreating the styles of the house.
Thank you for sharing
X

I just love how you modified these house stamps Dounia! What a charming map you've created and I love the subtle map peeking through in your background. Really wonderful project and I hope you will be framing it! xx, Autumn

I absolutely *love* this!!! It is amazing. I have a weakness for maps (check), medieval architecture (check), adapted stamps (check), interesting backstory (check check check), high impact finished product (check). You are officially the winner of the Internet with this! And surely you will soon be inducted into the Stamping Hall of Fame. Thank you so much for including all those marvellous photos. I haven't been to France yet, and I found the pictures so interesting. That glazed brick is sensational! Brillian work, just brilliant.