Heippa everyone, it's Riikka Kovasin from Paperiliitin blog with you today, and I'm here to share with you my take on the "Specimen Jar" using Darcy's stamps. It ended up being quite a circus and not a single actual jar!

When I first read the brief about the topic, my thoughts went to cabinets of curiosity, but then my train of thought took a strange turn to Dali. An image of "The Burning Giraffe" popped in my head with the bizarre human-styled creatures with boxes. I thought that maybe stacking matchboxes on top of each other and adding some details might be interesting and a different kind of approach to the subject, and then got excited about the idea. Like persons are vessels of their experiences and memories or their secrets and desires.
I hope that my take on the "box people" ended up being less frightening than Dali's version, but you could tweak this structure to fit your style easily by changing colors and stamps. What I also found interesting was the idea of putting something inside the drawers. What makes the character tick, what are his or hers inner workings or secrets? Or what about doing this kind of character as a gift and adding little present to each box? The possibilities are endless! 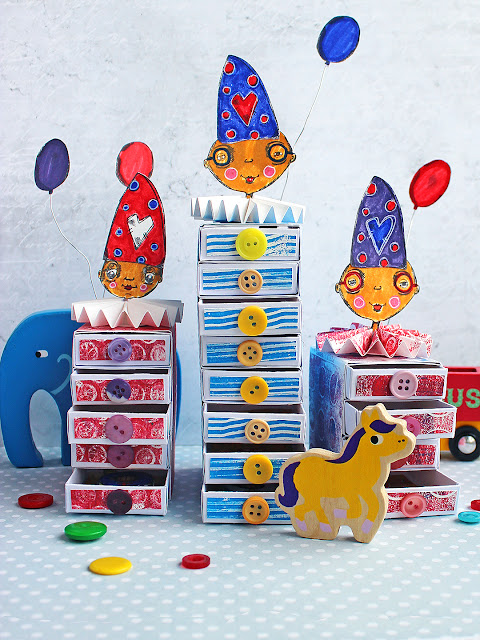 I wanted to pair the joyous and quirky Darcy stamps with vibrant colors, almost going with primaries! Somehow I immediately saw the characters wearing blue and red, not so much yellow. Now come to think of it, I assumed it was the happy colors than then guided my ideas more to the circus feelings of a big tent and colorful clowns.
So, first I grabbed two Fresco Finish acrylic paints, China (FF101) and London Bus (FF37). I also picked my gel printing plate and some white cardstock. These would become the makings of the bodies of the characters. I opted to make the matchboxes white and decorate them with colors rather than make the boxes out of colored cardstock. In the end it worked beautifully with the white ruffles! Making the boxes out of one color also allowed me to play with the height as I could mix the boxes between different characters. 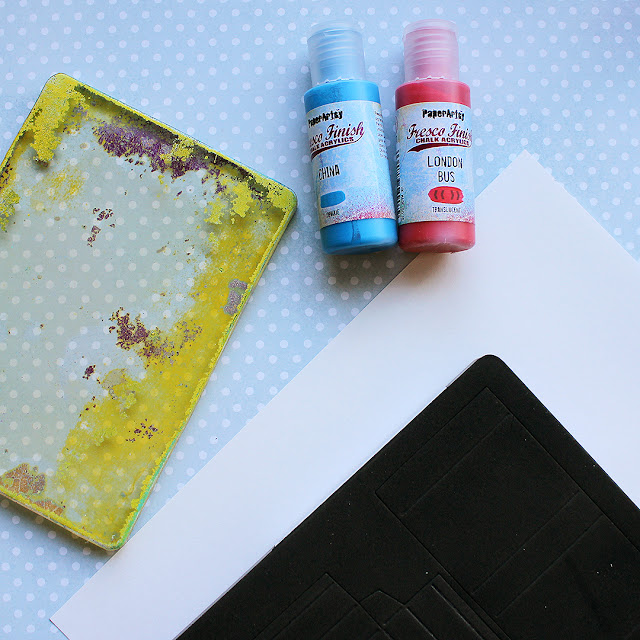 I patterned three pieces of white cardstock using different patterning tools. I made one blue, one red and one sheet with two of them mixed. The blue one I patterned with stripes by using a comb-like tool to go through the paint surface before pulling the print. For the red one, on the other hand, I made polka dots using bubble wrap. I pressed the bubble wrap to the wet paint surface on the plate before pulling the print. The purple version I patterned using a packaging of glue sticks. This caused a bigger dot pattern. 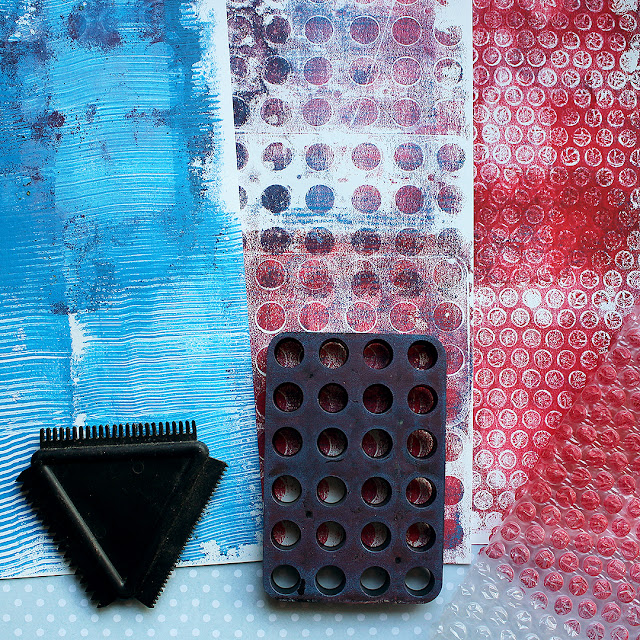 I then cut the matchbox pieces out of white cardstock using a die and measured them to find out the measurement for the colorful bits. I cut the gel prints to cover the sides of the character but also smaller pieces to be added to the front of each little box. The side pieces are also holding the characters together.
First I cut just thin strips out of the prints but before I could add them, I needed to think about the height of each character. I chose to go with three different heights to have a more varying look rather than use the same height to all. I also didn't want the characters to have equal difference, like 6, 8, and 10 boxes, so I ended up doing one with 8 and the others with 5 and 4.
I measured the height of each stack and added score lines accordingly so I could fold the piece nicely. I used double sided tape to adhere each box on top of each other and then the decorative strip around the stack. 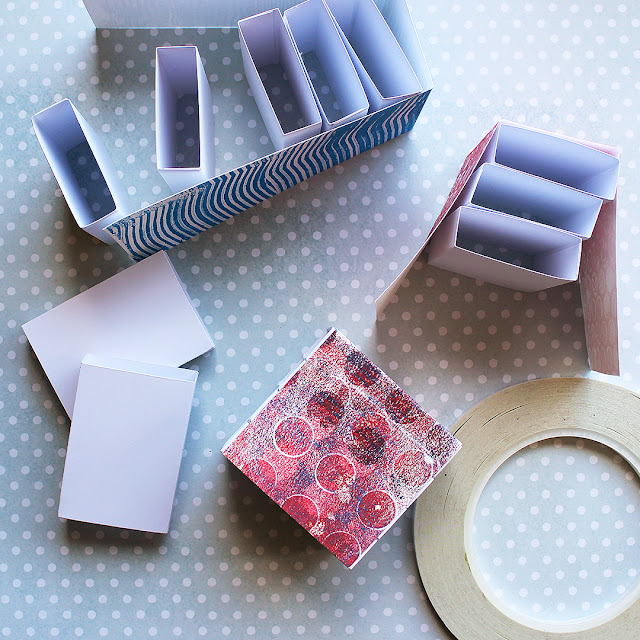 I also added the little pieces of the prints to the front of each little box matching the colors to the strips surrounding the stacks.
As you can see, I chose the blue striped piece for the tallest character as I really liked the look of it. Then the red dots and purple-ish dots are almost the same height. The reason I chose the purple to the smallest character was that the print was the poorest and had a smaller section with a good pattern. This way I could use it to the maximum.

Now that I had the bodies of my characters almost done, it was time to concentrate on their heads and inner workings.
I chose a fun set by Darcy with two characters as the heads (EDY21) and then stamped elements from another Darcy set (EDY08) to be used as the items inside the drawers. I filled one sheet of white cardstock with the elements and after coloring them, I actually made another sheet with the elements I felt were needed to fill the designs. 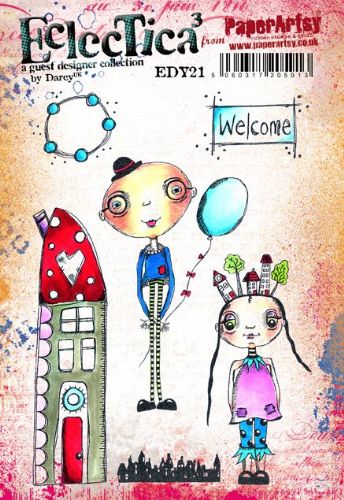 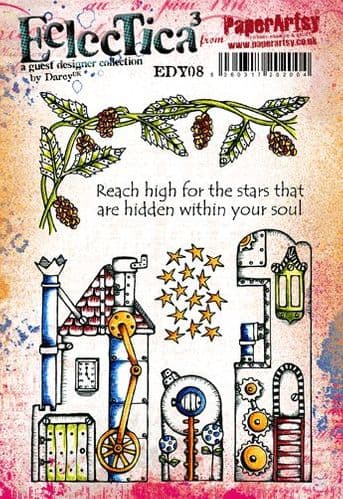 As you can see, I didn't stamp the characters completely, but only concentrated on their heads. This is because for these box people I didn't need more. I used the same thing for parts of the buildings as well, only inking a part of the stamp I thought I would use. Like for the hats I only stamped the roof of the house, not the whole building. 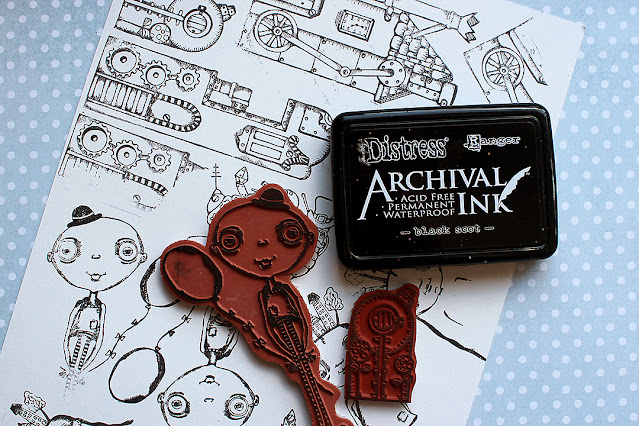 I then colored the characters and parts coming to the drawers using brush tip markers and paint pens. I followed the same bright color scheme I'd decided with the paints, but added a touch of yellow in there as well. To highlight some details I used a white paint marker and drew each character rosy cheeks using a pink one. As with the stamping, I only colored the bits I thought I would end up using - like the cogs or the door. 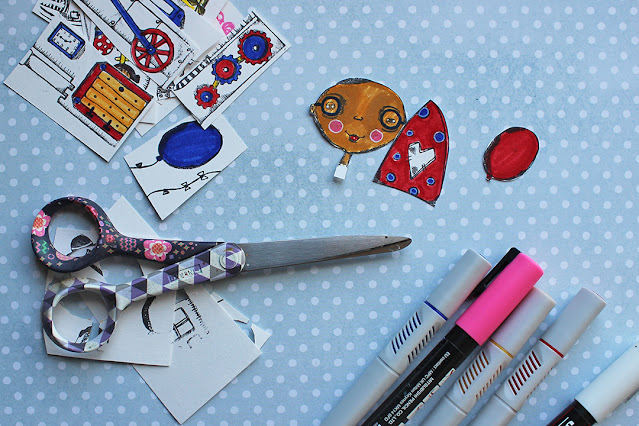 To add a bit of marvel and wonder, I then made a sheet to be added inside each box. I wanted the drawers to reveal something magical, or maybe elements of magic, so I made a sheet of golden stars on a yellow background.
I first colored a piece of white cardstock using a yellow tone of Infusions Dye Stain, Golden Sands (CS05). I sprinkled the crystals on to the sheet, added water and then used a big brush to cover the whole area with the dye. After drying the sheet I then added some golden stars on top using a Darcy stamp set (EDY08) with embossing ink, sprinkled golden embossing powder on top and melted the powder. At this stage I also thought to add some golden sequins to each drawer, but on a later stage decided against it. 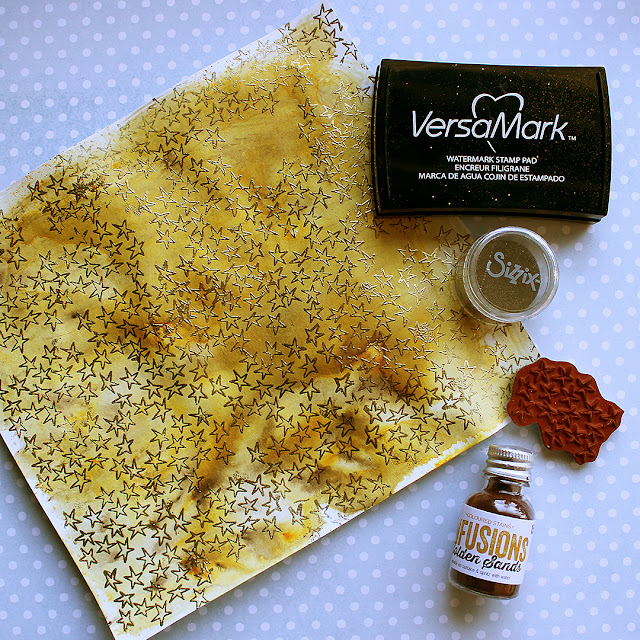 Then it was time to fill each drawer with the just created dazzle and the vibrant elements! Some of the drawers ended up having just a little detail inside while others had a bigger element. This stage was so much fun! Thinking which detail to put inside which drawer.
Instead of stamped details the drawers could hold some personal nicknacks as well or even found ephemera! Or what about a mixture of stamped items, personal pieces and vintage ephemera? Or even little rhymes or verses! There's so many possibilities! 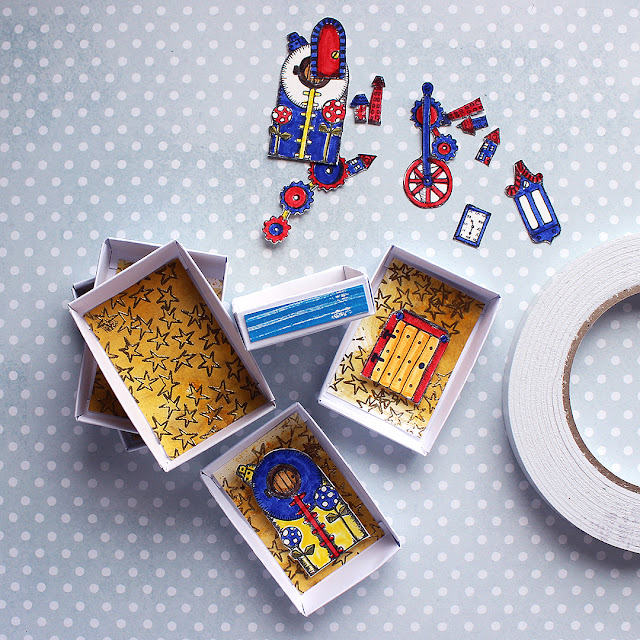 I used foam tape to add the little pieces inside the drawers to make them pop up more from the starry background.

As a final stage I then needed to add the heads to the characters. I was first thinking of cutting a tiny slit to the top most box and sliding the head through it but the strong circus and clown feel I had been gathering the whole time resulted another way. Instead I steadied the heads with a big ruff. I cut a thin strip of white cardstock and accordion folded it. Then I adhered the ends together and turned the strip into a rosette of sorts leaving a small gap in the center for the head. I used hot glue to make the rosette and support the head in place. For one of the ruffs I used a strip of the gel print instead of just white cardstock. This was to have some variety in the bunch.
I was happy that even though I added quite a big hat to each character and their neck was super thick, their heads were supported enough by the ruffle to stay upright! If you are using a thinner cardstock and it seems that the head keeps nodding, you could add either a wooden stick or a piece of wire to the back to support the head. This of course then means that the finished piece has even more one side where it's supposed to be viewed from. I did think if I should add another head facing the other side, when doing these, but then I thought that would be too strange. A bit too Janus like. On the other hand, I could have added a crazy ball of hair to each one thus making the characters more viewable from either side. 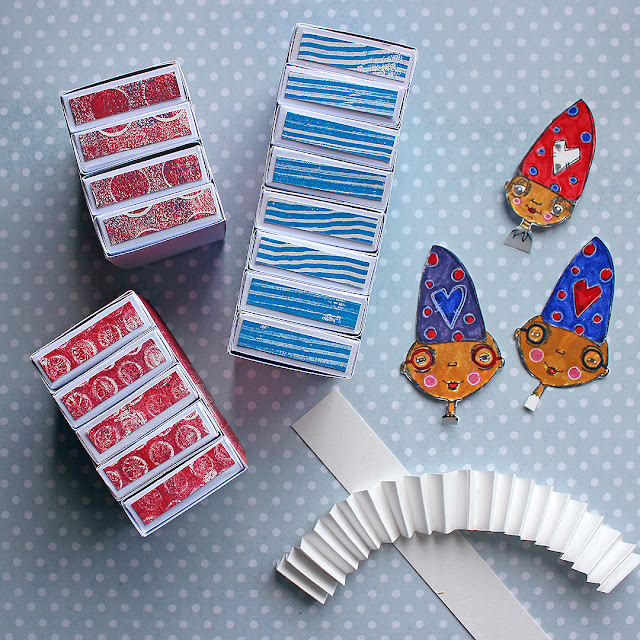 After adding the heads and ruffles in place, the characters seemed to miss a little something. I was thinking about adding hands, but as the characters in the stamp set (EDY21) had really thin hands, I got no help there. I found it funny to draw the hands now that the heads were stamped. But instead the other character had a balloon in the set! So, now that I was already thinking these characters as a part of the circus, what could fit better!
I made the balloons out of colored, stamped balloons and a length of wire. I used hot glue to add the wire to the balloon, poked a hole to the box using a needle and then pushed the wire through some hot glue to that hole. That way the glue secured the wire and made it sturdier. 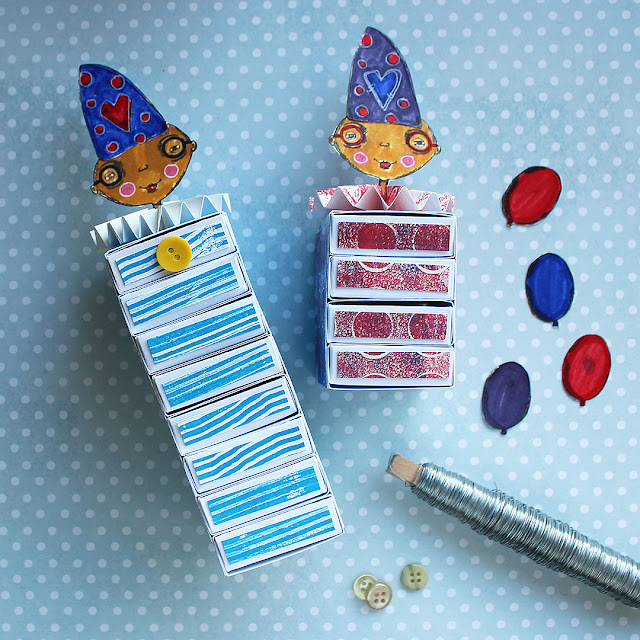 So, as the last detail I added some balloons to each character and then gave them a row of buttons running down the stack of boxes making up their bodies. I chose pink buttons for one, purple to another and yellow buttons for the tallest one. The reason I used pinks instead of red is actually due to the fact that all my red buttons were too big or too dimensional for these! 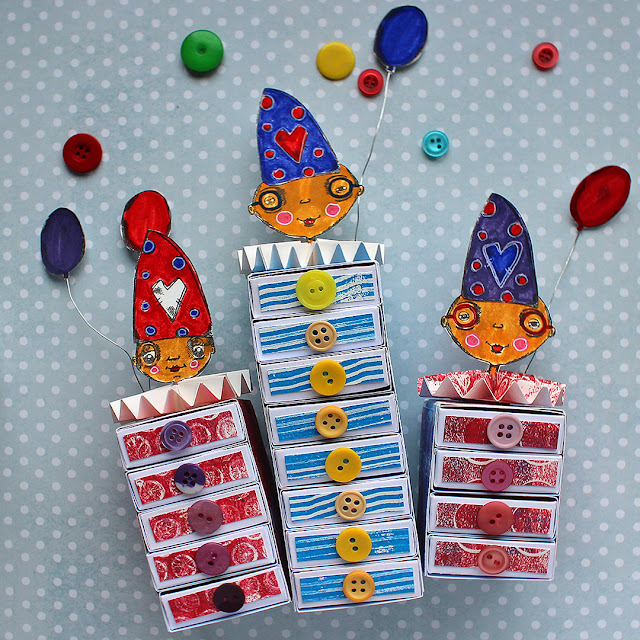 This project pushed me a bit out of my comfort zone and I love it! I'm not usually accustomed to such a vibrant color palette, but I really like the end result. What I also like is how easily you can change the appearance of these characters by using different colors or stamps.
I hope you'll give these characters a go! Think about the way you want them to look but also what treasures they hold inside, what you want to communicate with them. Or then just have fun, add elements together and see where you end up! It's not always about the finished piece, but about the journey.
Xoxo Riikka

Fun project. Thank you for sharing. 🙂

Hmmm,hmmm, now I'm thinking 3-dimensional projects might be interesting for my friends in place of my cards! Great inspirational ideas, you have given me, Rikka! Your clowns brought a big grin on my face this morning! Using those matchboxes filled with the embossed stars and other "magical bits" was a surprise, too! Love how you shared with us that the ruffles actually were a solution to the problem of supporting the heads. Using a second color adds immensely to my enjoyment of them!

The second color was on the ruffles (!)