2020 #7 Under the Sea: Diving Diva with Lynne Perrella Collection {by Keren Baker}

Intro
I love how Keren followed her instinct on this one, despite being a bit out of her comfort zone, she totally nailed it, and challenged herself to boot! Love all the interesting details, like the 'holes' she cut oufof the main feature stamp, the weaving fish in the reeds, and the blue hair! The colours are fabulous with those pops of orange too. Gorgeous!
~ Leandra


Hi everyone, it's Keren Baker with you today, and I'd like to share with you how I'm trying to use paint a little more and white a little less. It was a struggle, but with the help of my gel plate and some relaxing fussy cutting I made the most busy piece of art ever! I still admire all of you that just whip out amazing painterly layers without thinking, but we're always learning aren't we!

When I knew that I had Lynne Perrella stamps to work with, (who is a complete favourite of mine) I knew which stamp set would work for this theme and had in my head to do a layered piece using acetate and the fish peeking up above the acetate water. Then I remembered what a nightmare acetate is to photograph so decided to try having the girl completely submerged and the whole piece being the sea scene. 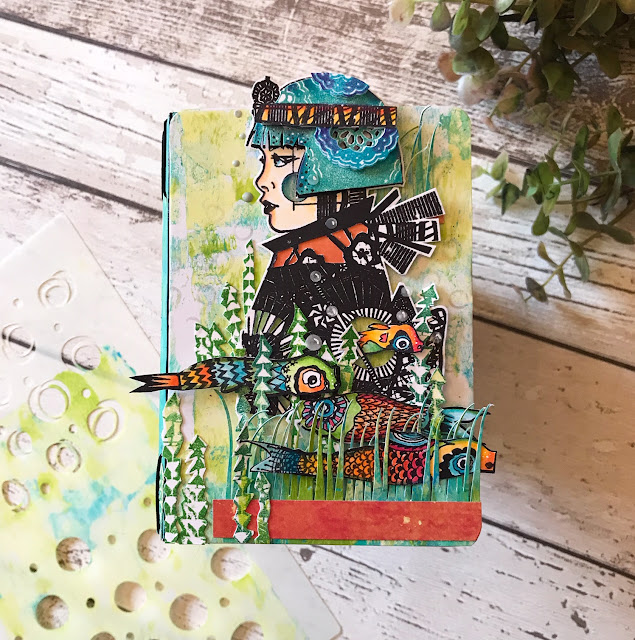 I thought I'd use some Eileen Hull Passport blanks I'd been gifted as my substrate. Having them die-cut onto mount board is so handy as you can throw lots of paint on it. The main stamping I knew I needed PaperArtsy Heavyweight Smoothy so I could paint and stamp and not worry about it warping.

The set I'd chosen for the main image is from LPC024 and my plan was to use the circles as air bubbles. 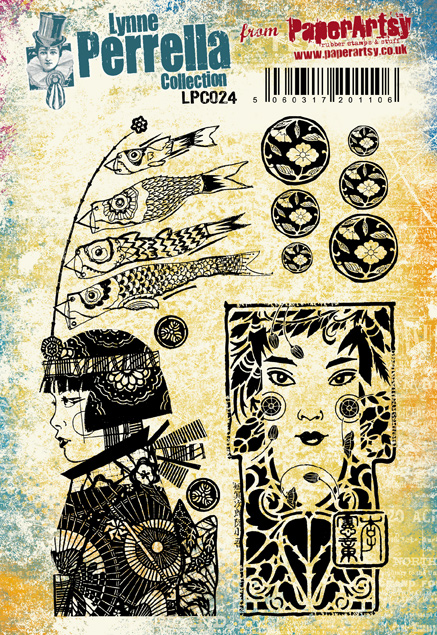 After trimming her out, I thought I'd change her hair colour. I did a bit of extra stamping in another colour and added some pencil shading and thought it reminded me a little of the old fashioned diving helmets so wanted to do some fussy cutting to add texture. The ideas that formed as I was cutting out was that the cheek would show the underneath water as a nod to being submerged in it, and her cut out stomach area could have a fish swimming out of it. 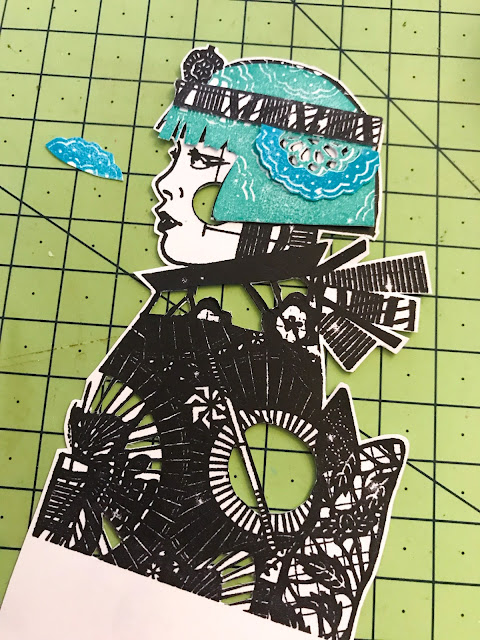 The fish in the original stamp are like lanterns coming from her headpiece. I reckoned if I cut off the bottom part near their mouths, it would make them seem more fish-like. I also wanted more detailed colour than just a paint wash would give me, so used my Prismacolor pencils which blend some beautifully. 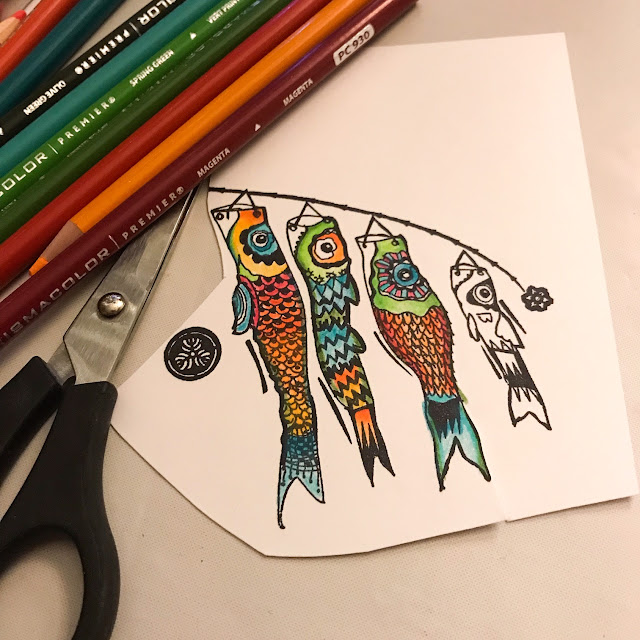 Having so many gorgeous PaperArtsy Fresco Chalk Acrylics in the perfect sea colours to hand, I thought I'd make a background using my gel plate. I just grabbed whatever looked good and came up with this palette: Glass Blue, Bora Bora, Teresa Green, Slimed and Sargasso. 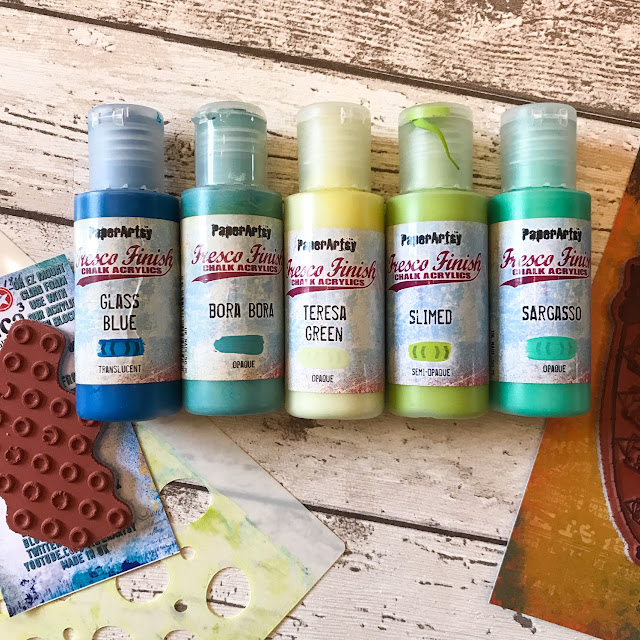 I didn't want definition so just plonked a few dots on and brayered using my PaperArtsy brayer which is sooo useful when you want to use it on a smaller project because of its more petite size. Alas, the first pull was too dark and busy and I knew would 'fight' with the main images. 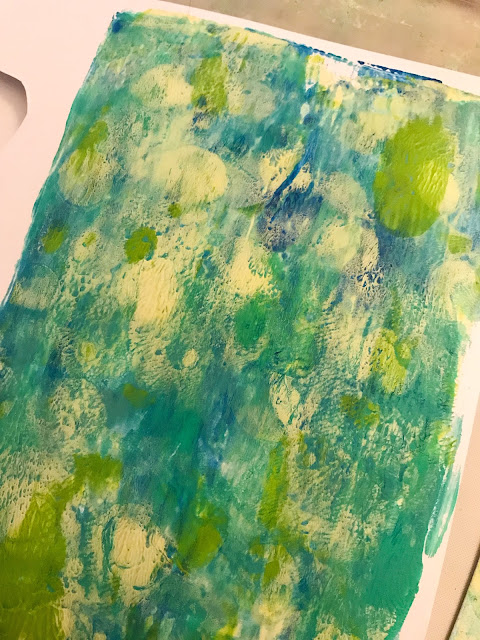 Plan B was to add a stencil onto what remained, brayer over the top and see what happened. 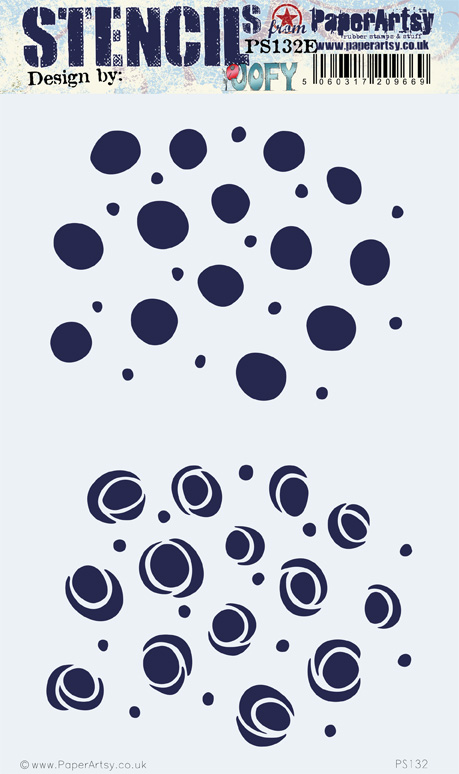 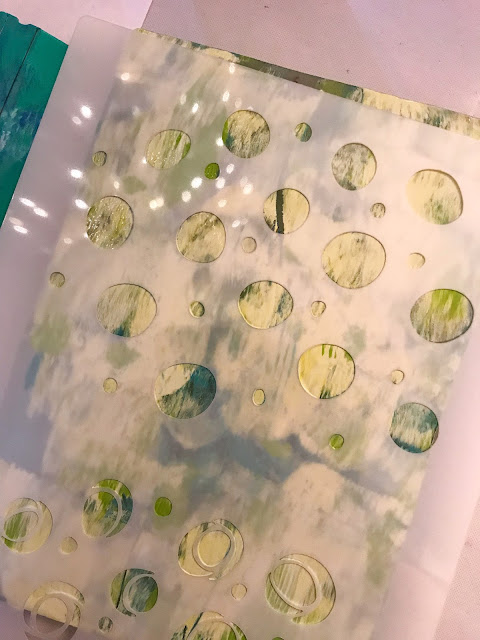 The second pull was much better and had chunks of white which immediately made me feel better! ;-) 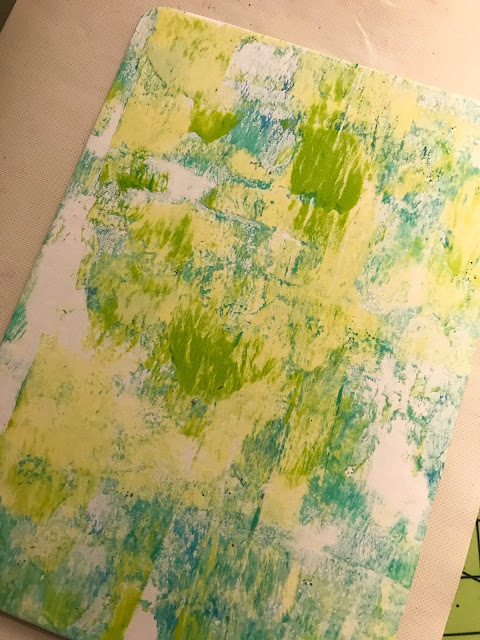 The  LPC023 set had the main image with beautiful 'fronds' on her headdress which I thought would do nicely for sea plants and greenery so stamped that my 'cleanup' piece from the gel plate and I trimmed them all out. 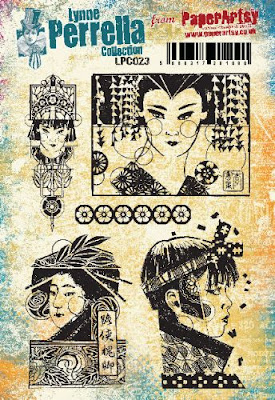 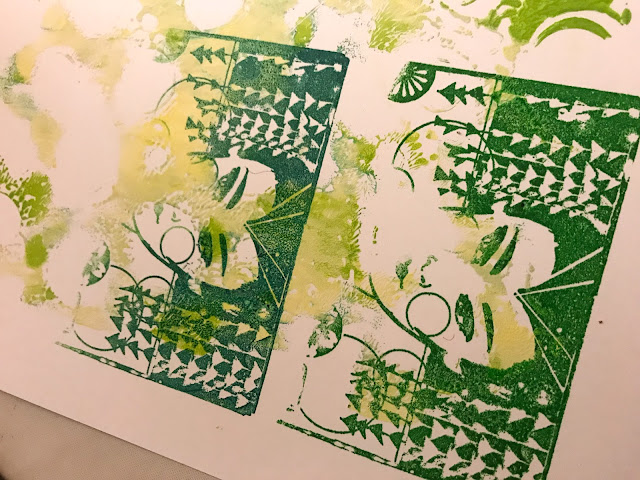 Now I just had to put it all together. In the next photo you can see some of elements more clearly. If you look carefully, I even sneaked in a 'bubble' styled mini stamp from Tracy Scott- EM60 (one of her new ones), which I've used loads so far stamped in a light grey so it doesn't draw too much attention to itself! 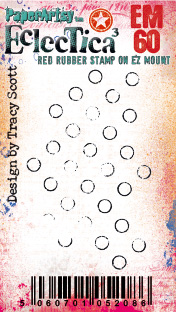 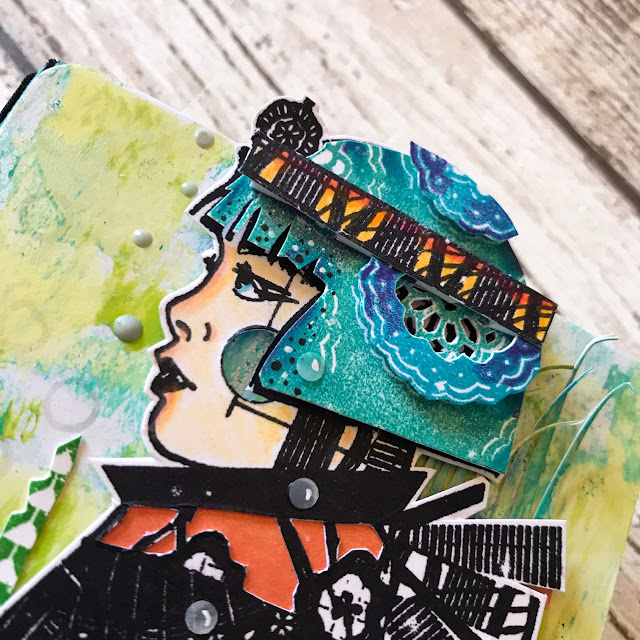 You can also notice the other bubbles that I created- the girl's bubbles using some Nuvo drops and the fish bubbles using some punched circles of DuraLar Matt with a little white gel pen. Her outfit was fading into the background so I added some bright orangey paper which makes it look like a diving outfit too! You can also see in the next photo, the little fish swimming out of the girl. 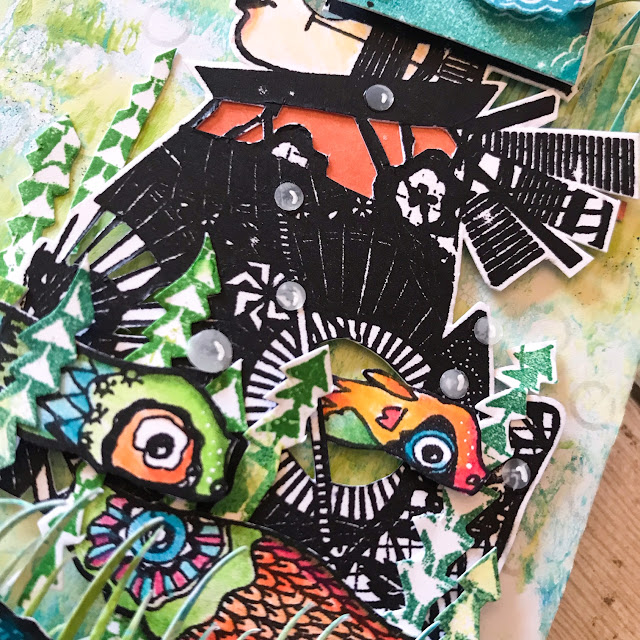 To use up the rest of paint on the first pull, I pressed the spine onto the gel plate which gave me a nice effect. I did need to add some alcohol pen to cover up the mount-board exposed within the folds. It ties the colour scheme together too, which was a happy coincidence.
The first more ugly pull on my gel plate, I trimmed out and used for the back of the notebook. 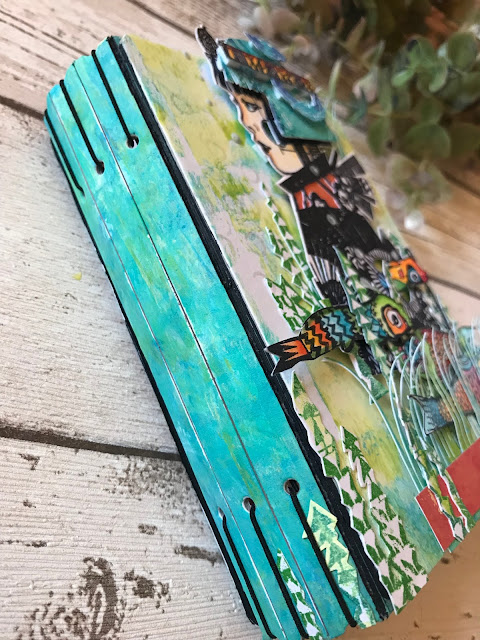 I love the feeling of movement given by the fish. Using spare painted card, I trimmed out some 'reeds' and weaved one of the longer fish through it. 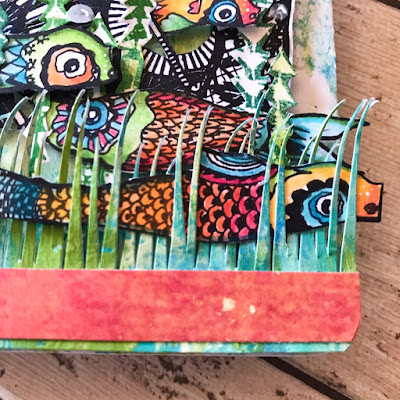 I did use a tonne of foam pads and tape here. I know it's completely impractical as a notebook, but maybe someone might find it a useful thing! 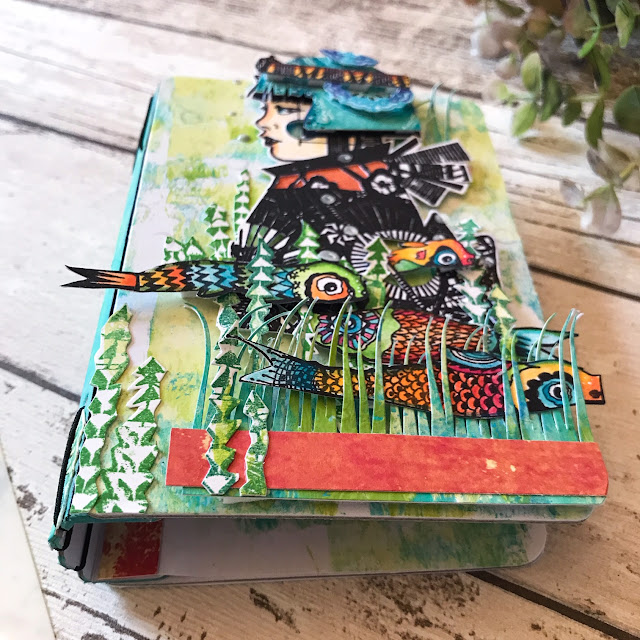 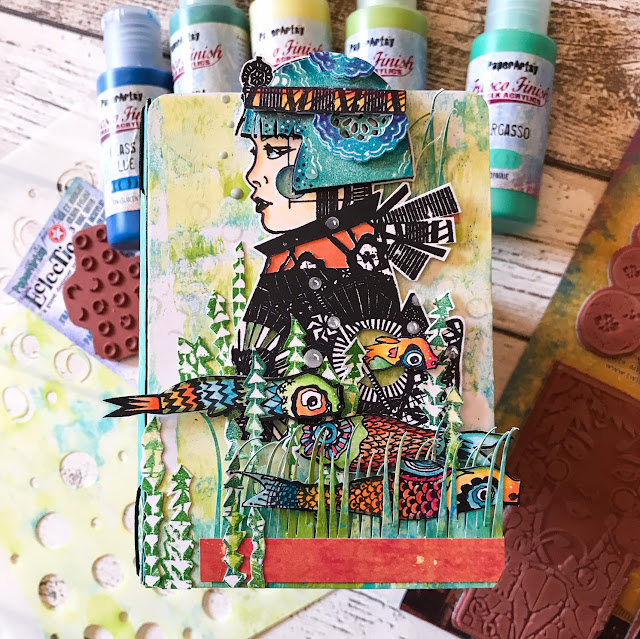 So, the end result ended up entirely different to my initial plan. I love making design decisions as things go on and finding new details to help pull the theme together. I realise that orange isn't a colour you'd find in every sea, but it needed a 'bright' to lift it, and I guess we're allowed a little artistic licence. I don't think I've ever used so many different types of media in one project, and whilst the end result is a little too 'busy' for what I'm used to, maybe it's time to embrace being more painty!

Hope you get time to pull out some supplies like pencils that you might not have used for a while!
See you soon,

This is amazing Keren. I love the detail in your project... Absolutely beautiful.

What a fabulous project Keren!! I love how you have used Lynne's stamps, lovely idea and great details. xx

Such a clever and beautiful project, Keren! X

Keren this is one amazing post my friend! I adore the colors and design. Wow! So beautiful!