Corrie has created a cool 3 dimensional object for you today! In fact I'm going as far to say this could be called a reversible clock! Read on to see why! ~ Leandra


Hi everyone, it's Corrie from MadeByCHook with you today, and I'd like to share my take on the Tick Tock theme with you.

The people who know me, know that I am one of those people that likes to do everything and anything, all at the same time ! I had lots of ideas for this theme but in the end I chose to make a 3D Mixed Media project. And it was fun ! 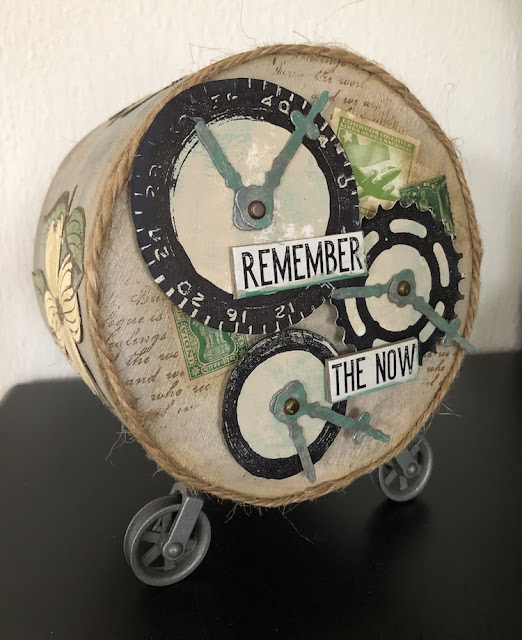 When I started this project I had an idea, but it came out a little different to how I had it in my mind. Sometimes you just have to go with the flow ! I had a cheese box and lots of other stuff and just got on with it. It eventually developed under my hands into this "clock". 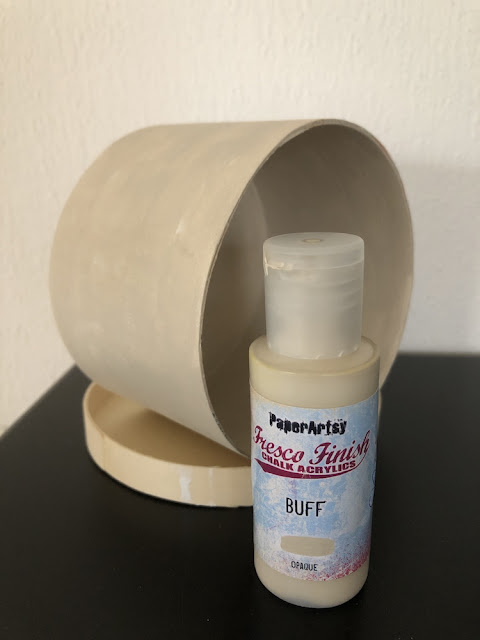 So, the first step was to paint the box with Fresco Finish Chalk Acrylic in the colour {Buff}. 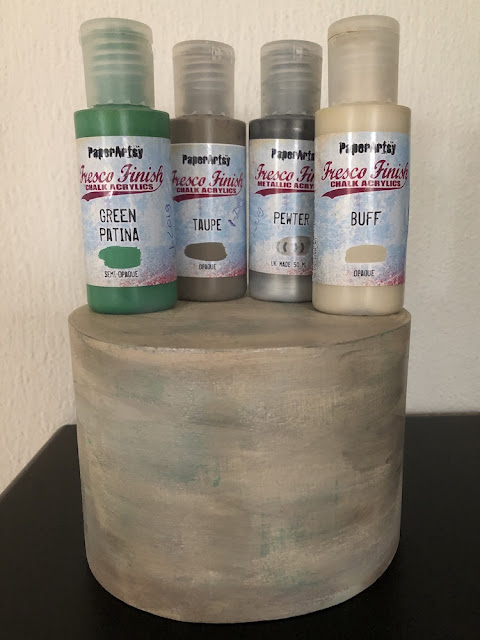 After that I added Fresco Finish Chalk Acrylics in the colour {Green Patina} in the way Seth Apter does with a piece of card stock, so you paint the card stock and press it onto the project. After that I added the colours {Taupe}, {Pewter} and more {Buff} with an almost dry brush. This made it look a little old and worn. 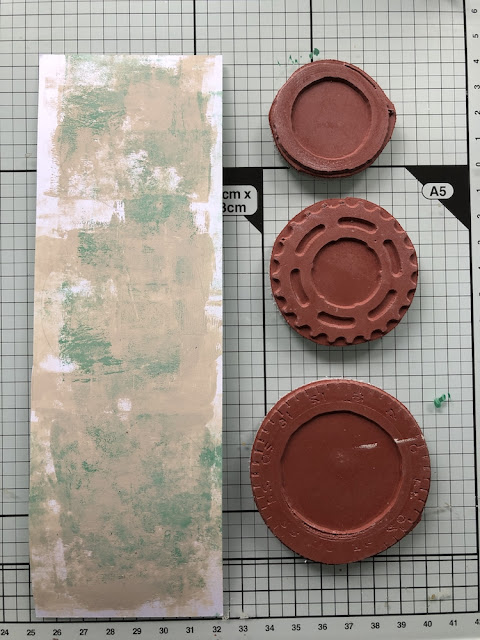 Until I do it, I always forget how easy Fresco Finish Chalk Acrylics are to stamp on. I used ESA12 by Seth Apter here to adapt the stamps into some "clock faces". I used Archival Ink in {Jet Black} for this. 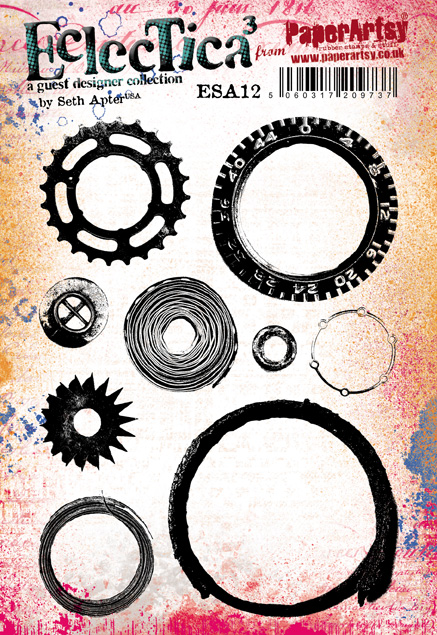 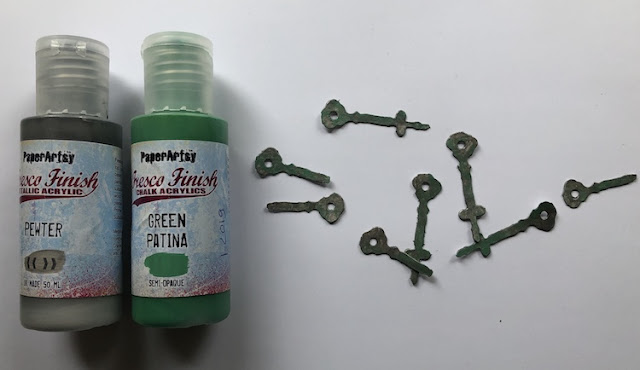 Of Course clock faces need hands. So I used an old Tim Holtz die to cut some hands out. I did think that the big hand of this die was to big, so I just die cut the small one several times and then used a pair of scissors to cut a piece off the bottom of half of them. I then painted them with Fresco Finish Chalk Acrylics {Pewter} and {Green Patina}. 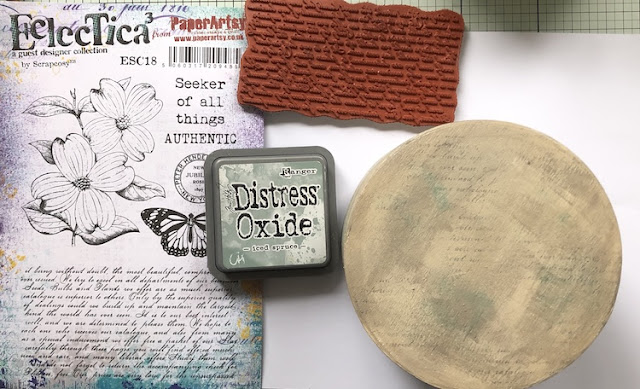 I thought this big script stamp from ESC18 by Scrapcosy would look good on the box, and it did but I used Distress Oxide {Iced Spruce} and because I kept handling the box it just disappeared. I repeated the process later with Archival Ink in the colour {Potting Soil} which worked much better. 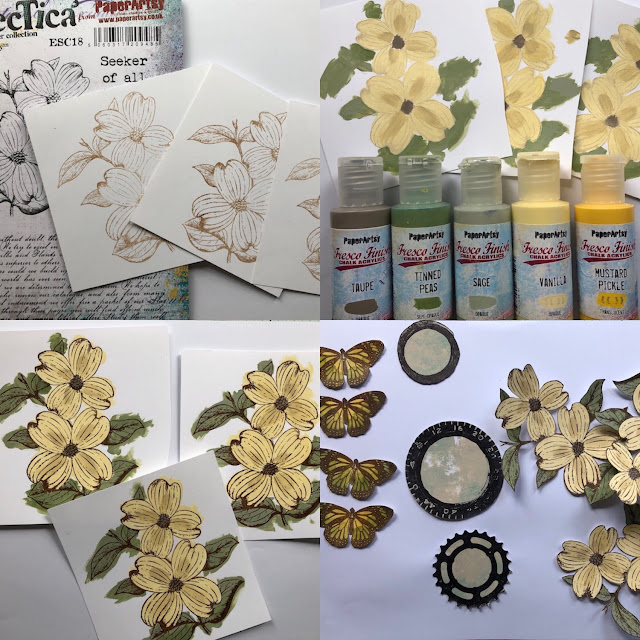 For the decoration of the box/clock I stamped the flowers and the butterfly from the ESC18 set. A good and quick way of getting some colour on the images is by stamping them with a light coloured ink in a stamping platform type tool, making sure to leaving the stamp in the stamping tool in the exact same spot. Then just paint them, you can go over the lines if you like. I used some light colours of Fresco Finish Chalk Acrylics here ie. {Vanilla} and {Mustard Pickle} and a touch of {Taupe} for the flowers and {Sage} and {Tinned Peas} for the leaves.  After the paint has dried, just put them back in the stamping tool and stamp again ! I then cut everything out. I did the butterflies in the same way. 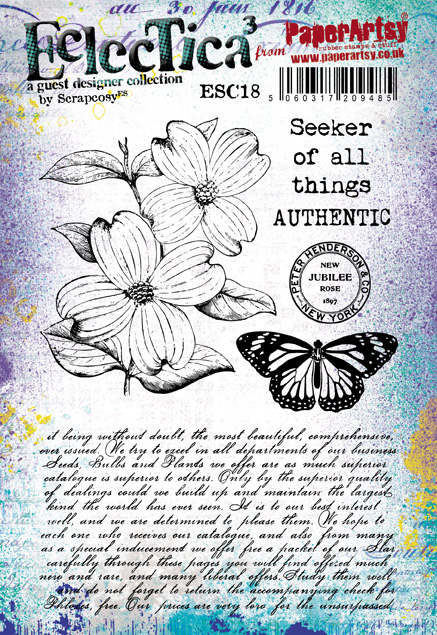 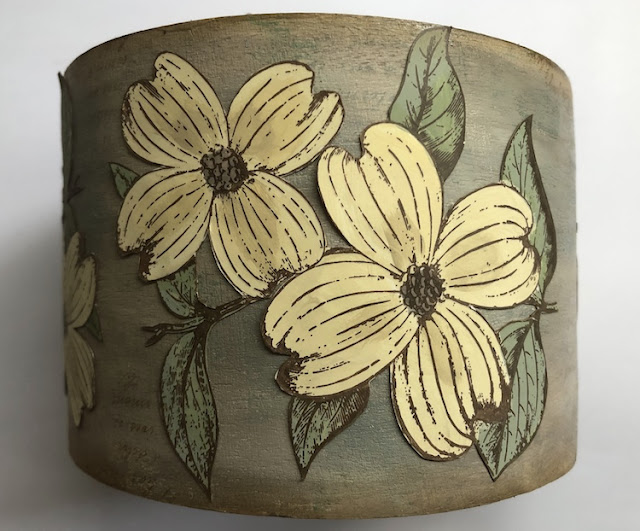 I really like how these colours go together to give a vintage-y look. I also inked the edges of the box with Archival Ink {Potting Soil} to make it look even older. After I glued the flowers onto the outside of the box I got all my bits and pieces and put it all together.. 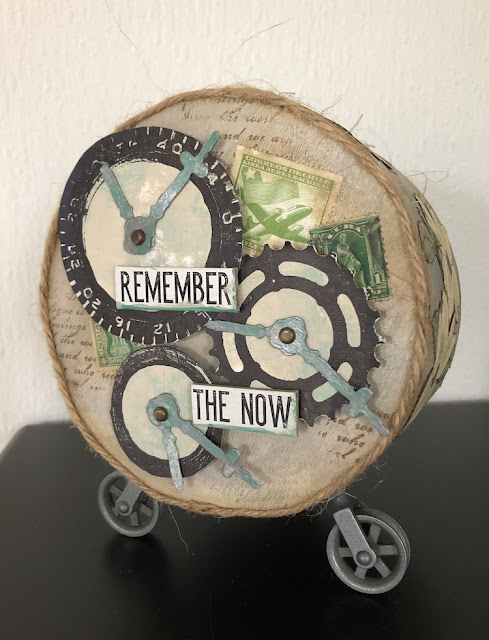 I added some postage stamps, just because I have stacks of them.. lol and added the hands to the stamped circles with a brad. I then glued them onto the "clock face". I still thought it needed something else so I added some twine around the face and a sentiment strip over part of the faces. It is standing on some Pulley Wheels by Tim Holtz. 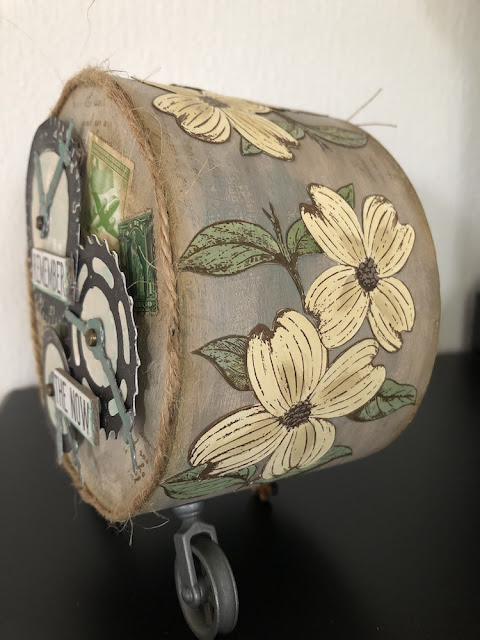 In the side view you can see I added some cardboard pieces under the clock faces to give them some dimension. I just use pieces of old box for this. 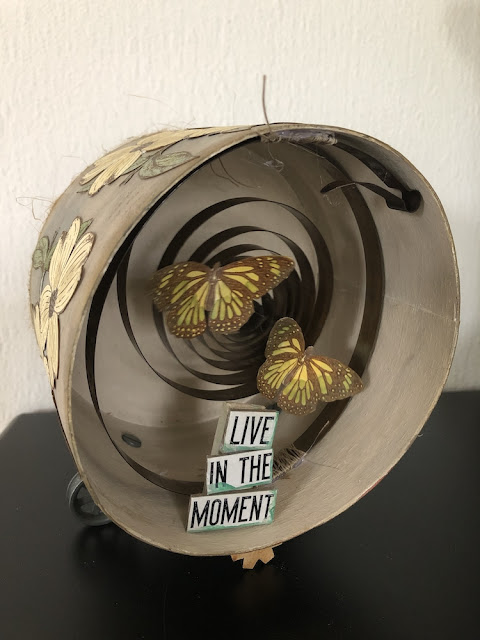 Of course I couldn't leave the back.. I did have a lid but decided that I didn't want to used that so I added a spring from an old clock and attached the butterflies to that. Another sentiment glued on a piece of wood to make it stand up finished it off. Of course you could put anything in here; more flowers, a scene with paperdolls, gear wheels etc. The possibilities are endles.

I really love these kinds of projects, they are time consuming but oh so satisfying. I always try to think outside the (cheese) box and hope that I achieved something a little different this time again. Of course we would like to see you take part in this topic and make something 'Tick Tock' too. Have a go and see what you can come up with !

Thank you so much for stopping by here today ! I hope you'll come and find me in my other locations too :

What a stunning clock Corrie - beautiful

What a clever idea Corrie, love this ❤️❤️

Fab creation Corrie, love both 'sides' of your clock.

Such a clever project. Just love the double sided nature of it too!!!

What a fantastic project Corrie!! So unique and full of ingenuityI love how you have used Seth and Raquel's stamps by box side and inside. This is so fun. xx

That is so clever, Corrie! X