Just got a few minutes on day 5 of our trip to Aussie and New Zealand to update you on our adventure so far..... 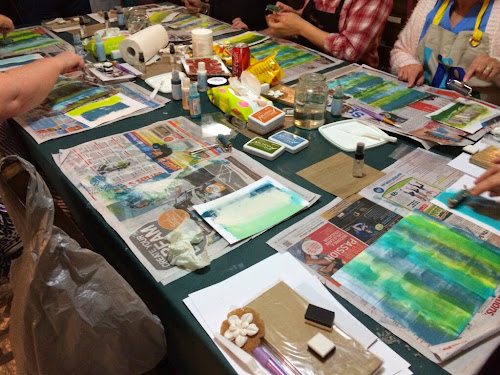 Tues late evening we left Heathrow bound for Hong Kong and Melbourne, many hours later we were met in Melbourne 6.30 ish by Angus and Jennifer, our hosts for Thursday and Friday at their shop Crafters Cupboard. 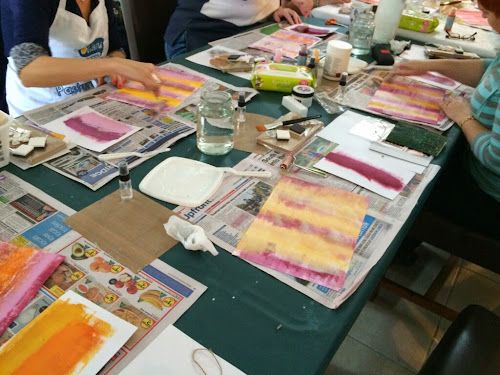 Thursday the main goal was to chill by catching up with Malcolm and Helen Calder for lunch. They were friends from Tauranga, New Zealand and had moved to Melbourne a year after we left NZ. It was lovely to catch up with all their news, albeit briefly. 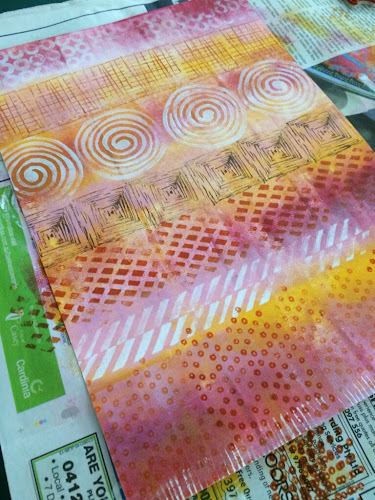 Friday I had a class 10-2.30 where we did various Ellen Vargo, JOFY techniques, and generally chatted about all kinds of stuff- I'd forgotten how Aussies can talk non stop, and so it was nice to just sit and listen to them rabbit on! 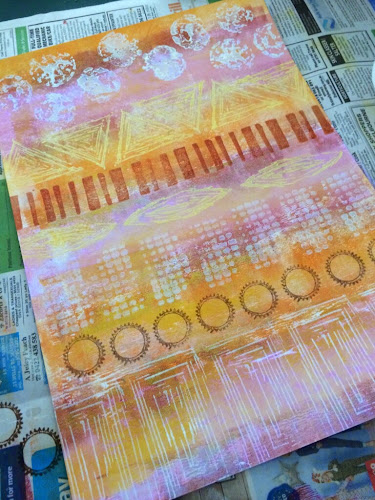 Friday at 3 and 6pm we had 2 groups of ladies come to watch demos, more chat and laughter. They made striped backgrounds and over stamped with more paint and archival inks. As pictured above. Typically I only took a couple of class pictures (apologies) They went onto make more random abstract backgrounds (I will do a video on both methods).

I then went on to demo various techniques throughout the afternoon. 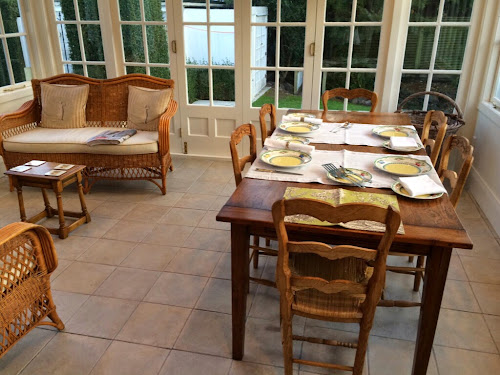 At midnight we were back at the airport for a 3.5 hr flight to Christchurch that arrived at 5am. Kind of crazy, but we had decided to power on through Saturday by keeping busy. My dad, always a great tour guide had planned out a day trip driving around the city, but first breakfast, with bubbles. Probably not a great way to go, fighting jetlag with alcohol, but when in Rome and all that!

So first up we went to Sumner, a coastal town, tucked under the blobby bit that sticks out into the sea on the eastern side of the South Island, Christchurch. Here is dad and Mark, banks peninsular in the background. Scummy days out for me as a child were often spent in this area on the beach, it used to be known as the place where hippies would live, wanting the coastal lifestyle yet close proximity to the city. 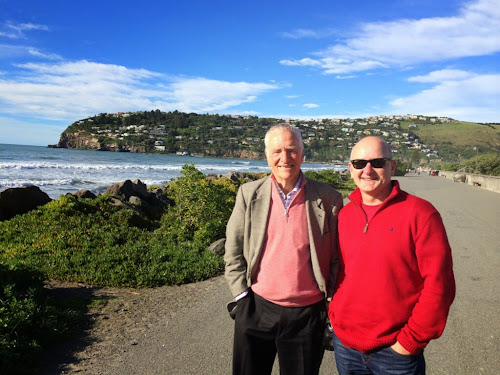 Sumner with its hilly land was particularly badly hit in the earthquakes, houses up the hills fell onto houses lower down, many million dollar properties are sitting empty and are uninhabited, just left as they were. There's a massive safety issue, with entire slips gouging out the hilly vista, and many containers are lined along the road at the foot of the coastal road to prevent further rock/ land slides encroaching onto the road below. Very sad, and astonishing that a few years later, these temporary measures are still there. As you can see below, they have covered the 2 layers of containers with art work to mask the ugly containers, but in other places they are not decorated this way. 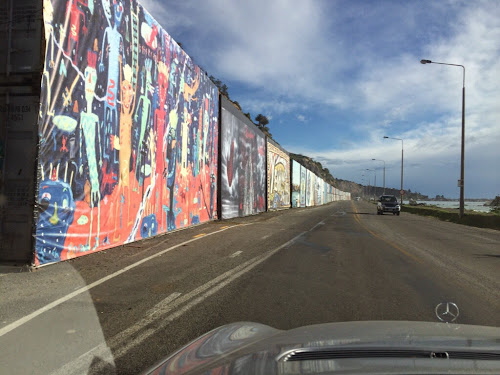 You cannot get you head around the vast number of lives affected, and getting people re-homed, and houses repaired is still the primary focus here. 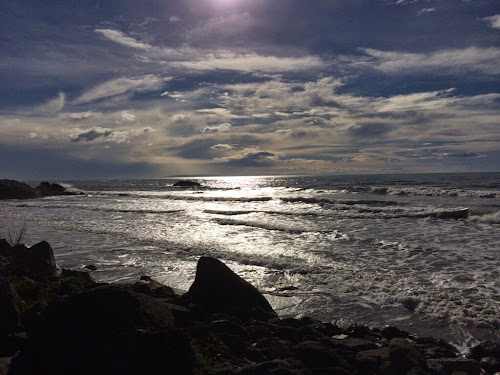 So we took a stroll, and right on the beach we found this... 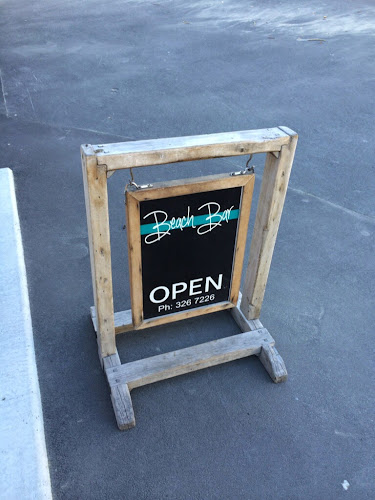 Who are we to object to a glass of wine in the sun on a winters day in NZ! We sat at that table outside in the picture with a Chardonnay. Nice. 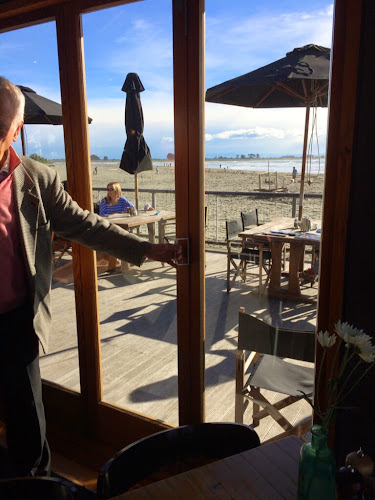 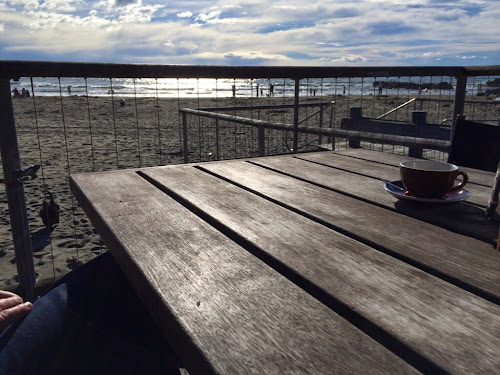 I even saw some yarn bombing...small scale! 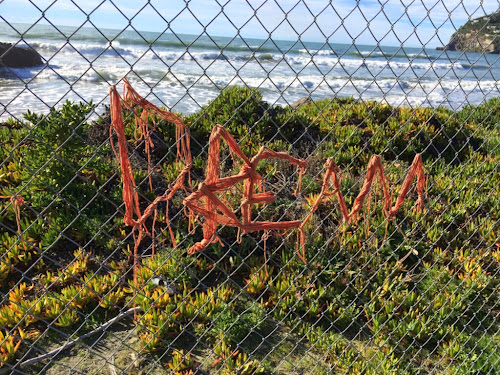 And then when we came out, this! A London bus....things you don't expect to see in Christchurch! They do tours around in this apparently. 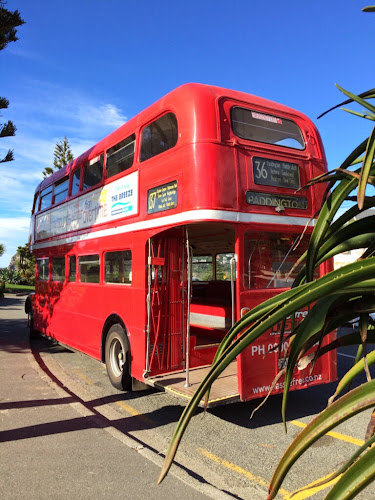 Next we drove further noth up the coast to New Brighton, in this area some of the land is very low lying, and we saw entire neighbourhoods, street after street of uninhabited broken homes, and cleared sections, it's very weird that some have been cleared and others haven't. The roads surfaces are all broken, and you will drive past bus stops and corner shops showing that a once vibrant neighbourhood is now gone and deserted. Like a ghost town, then 2 streets later there will be 3 houses unaffected, and further along more destruction. The randomness of the destruction is weird to observe. I was too sad and shocked to take pictures. 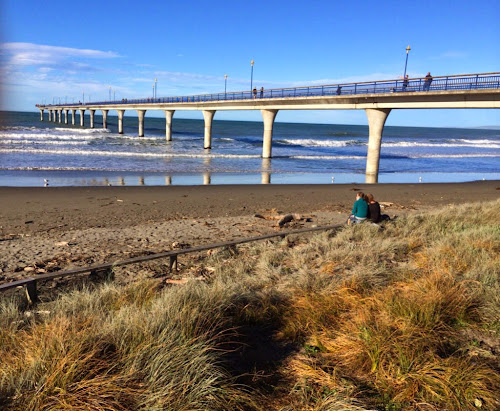 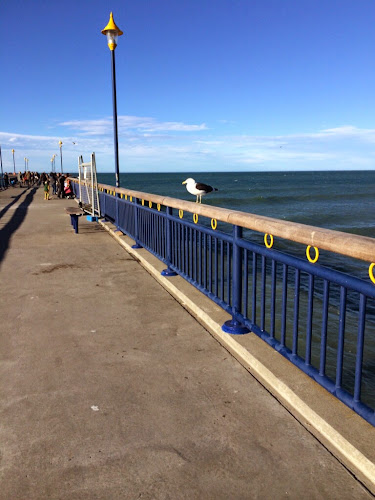 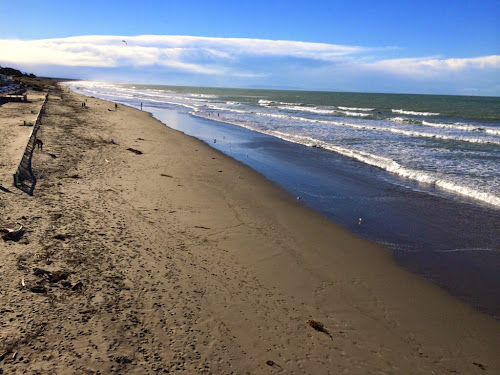 The pier from the beach survived, a newer construction. And from here the Canterbury Coast extends north looking like this most of the way. Played here for hours as a child too. 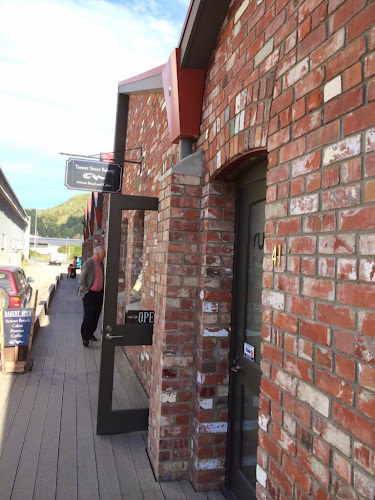 As we headed back into Christchurch it was so apparent how many businesses moved out of the CBD to continue to trade in the suburbs. Ferry road is one of those light industrial areas, here a craft village has popped up with artisan shops a brewery, right next to light industrial manufacturers or car repair garages. No prizes for guessing why we stopped here....brews! 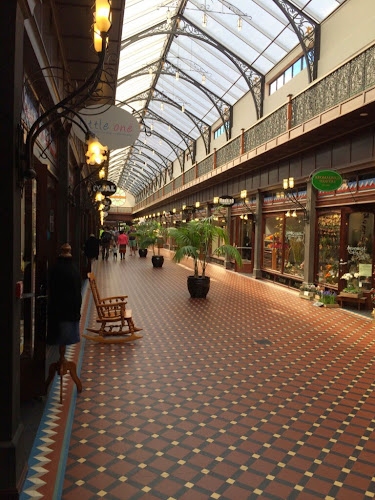 The decor in the mall section was stunning, and we stopped for a craft beer, brewed on site and stone fired pizza for a late lunch. 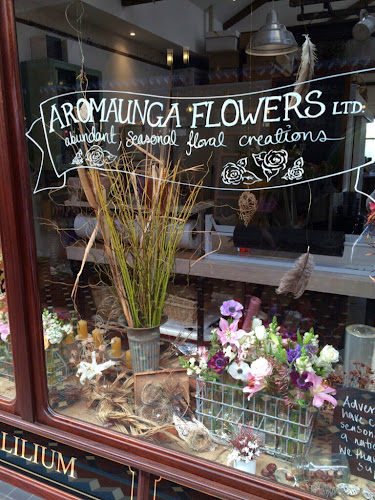 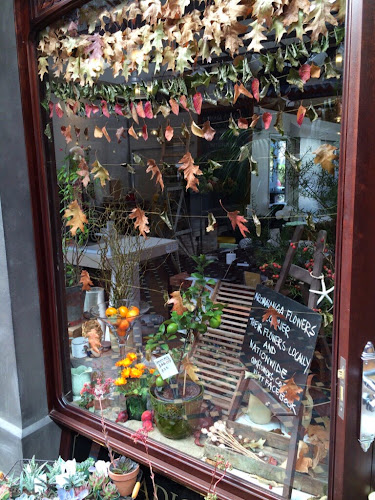 Here was a florist that smelled divine in the mall section. 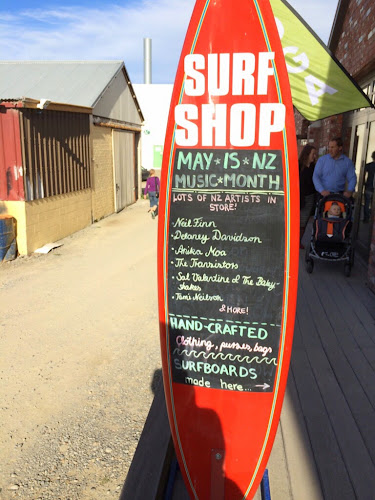 A surf shop on the outside section. 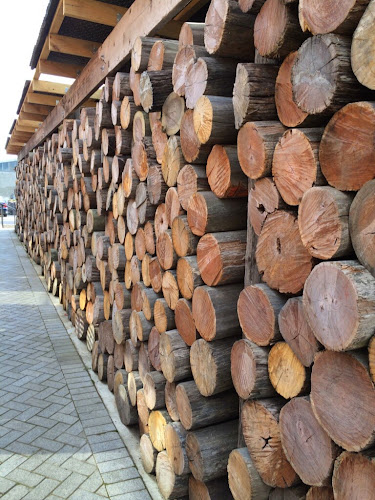 Nice detail in this 'wall' alongside the brewery. 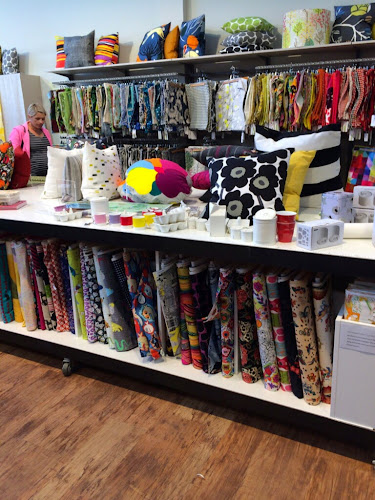 It's nice to see rising from the ashes much in the way of new development, but it's shocking to drive anywhere and every street has blank sections that have has destroyed buildings removed, but in equal number are empty houses, apartment blocks, commercial buildings that have not yet been dealt with.

So today (Saturday ) I have consumed the obligatory champagne with my breakfast (Dad does crack me up), and we are off into central city for the first time. We are meeting up with Melissa and Hilary, 2 school friends for lunch. We also intend to take a walk around the city, but there is rain and gales coming this afternoon, so we shall see how far we make it.

Take care and enjoy your weekend!

Posted with Blogsy
Posted by PaperArtsy at 23:55

Email ThisBlogThis!Share to TwitterShare to FacebookShare to Pinterest
Labels: Leandra, PaperArtsy on tour

How wonderful to see your post pop up just as I was going to switch off for the night (er, et's actually very early morning ;D)! Thank you for taking some of your precious time and energy to show us so many photos and explanations too. What a tragedy that the area has been so devastated.

Sam & I were saying on Twitter last night how much we missed there not being a PaperArtsy blog post at 7 pm sharp, lol! This has made up for it! Take care Leandra and Mark and enjoy the rest of your trip. Don't wear yourselves out ;-).

Enjoy your trip! I am counting the hours to next Saturday

To read of the devastation you have seen is so very sad, i knew there had been a lot of upheaval and sadness from reading first hand accounts from another site i visit. This lady had a lot of damage to her home and shared the story of how fantastic the insurance industry has been trying to get her sorted, her unease of the the same thing recurring again and of the aftershocks that just keep on coming. Truly heart wrenching reading.

It must have been so hard for you worrying about your Dad while living in the UK so it is wonderful that you are there with him, enjoying his company once again and sharing some childhood memories. I hope you are coping well with all you have seen.

Great you had the time to share, doesn't seem 5 days since you both lect the UK, time is definitely marching on.

Hope you have managed to visit your house and sort out whatever you needed to do.

Enjoy the next leg of your adventure, always good to see where you have visited, thanks for sharing, take care:-) x

Sorry about the upsetting devastation Leandra. Loved the catch up though. Nice to get a flavour of somewhere that have never visited. Enjoy your time there. Xx

Hi, Leandra and Mark
Glad to hear from you - but you must be heartbroken to see the devastation to your beautiful country. Thank you for taking the time to share the photos. As Lesley said, it makes up for their being no Saturday 7pm craft post today!
Take care, see you soon.

Natural disasters are so cruel aren't they. It takes so long to recover from them. Lovely to see the cheerful NZ photos too, nothing better than some inky fun and a glass of wine with a beach view. Enjoy x

Lovely to hear a post from you, although sounds bittersweet. Great pics and even in winter a drink on a beach sounds bliss. Enjoy the rest of the trip x

Not surprised you couldn't take photos of the devastation that still remains, I can't imagine how awful it must be. But I'm pleased your enjoying your visit on the whole - and champagne for breakfast can't be bad. :) Thanks for sharing the experience & such great photos, enjoy the rest of your Down Under adventure.

Hi, thanks for sharing your fab pictures of your trip and your thoughts. Enjoy the rest of your trip, have a great time with your friends and family x

Thank you so much for such a fascinating post, Leandra, and for thinking of us in writing it. I feel so much for those who have lost their homes and livelihoods. I know what it's like to have your home devastated. Lovely to see your dad! Hope he gets to come to the UK often. Enjoy the rest of your trip,

Hi Leandra,
Thanks for a great day with you at Crafter's Cupboard. It was great fun, added a new dimension to the YouTube videos which I often watch again, and taught me some new stuff.
I can just imagine how disturbing it's been to see NZ again after all the earth movement. And look, keep going at this pace and your system won't have adjusted enough to feel the jetlag when you get home.
Well, I won't rabbit on any longer. ;-)
Miles of smiles,
Ros.