Hi everyone, it’s Renata Peley with you today, and it's my first time here on the PaperArtsy blog, I'm one of the 2022 newbies! As you will see, my style is bright and fresh, and that's what I will show you today for an art journal page that I made with some super-fun JoFY stamps.

I very much enjoy making backgrounds. I know many people say that the focal point is what matters the most and be that as it may, I think that a well-made background makes the focal point stand out, be more beautiful and have more meaning. For today’s topic, “Pattern Play”, I wanted to create patterns that would complement the focal point, grab some attention but still not “steal the show” from the main image. 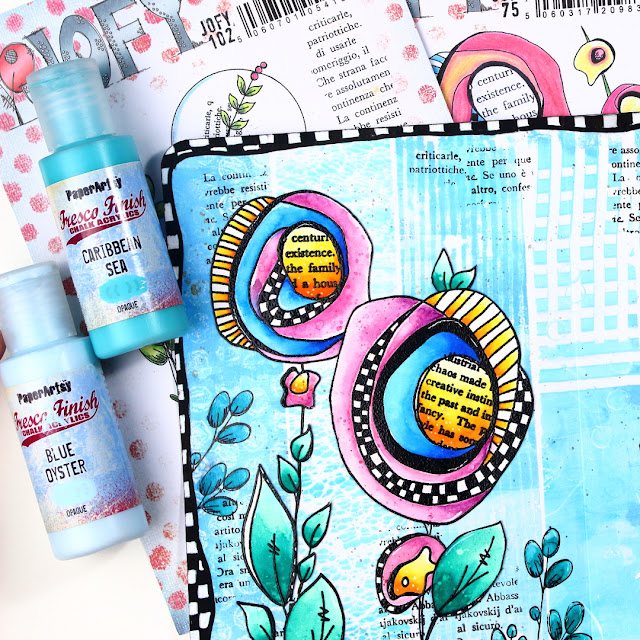 When I think about patterns, what always comes to my mind is the gel-plate and all the ways you can play with the stuff just laying around in the house. And that was as far as I had it planed out. I took some parchment paper, pieces of cardboard, a straw, some plastic cards for texture making (I don’t know the proper name for these), a brush, a bubble wrap and so on. I also tried stamping my stamps on the gel-plate and that turned out pretty, as expected. But now the problem was which pattern to choose. So, at the end I decided to use as many of them as I can. Since I used parchment paper for gel-printing, they were easy to rip into thin, more or less similarly sized strips. 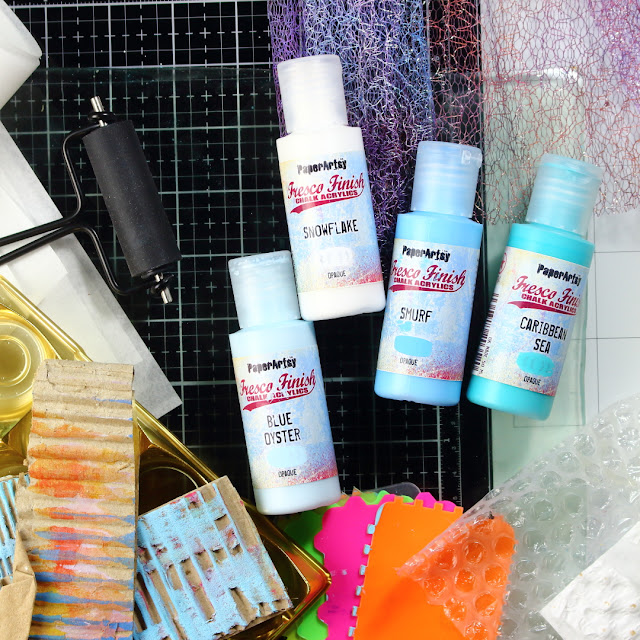 Of course, me being me, I used blue and turquoise colors, or to be more precise Caribbean Sea, Smurf and Blue Oyster. The shades that I chose are gentle, beautiful and just ideal for subtle backgrounds. I chose not to use the shades or colors that are too much different from each other, because I think that gives the feeling of a too busy background, as the patterns were already giving enough interest on their own. The next step was to glue them all down to my paper with matte medium. When gluing the parchment paper, some wrinkling happened, but to be honest, that didn’t concern me much and I decided to look at it as a fun texture element. 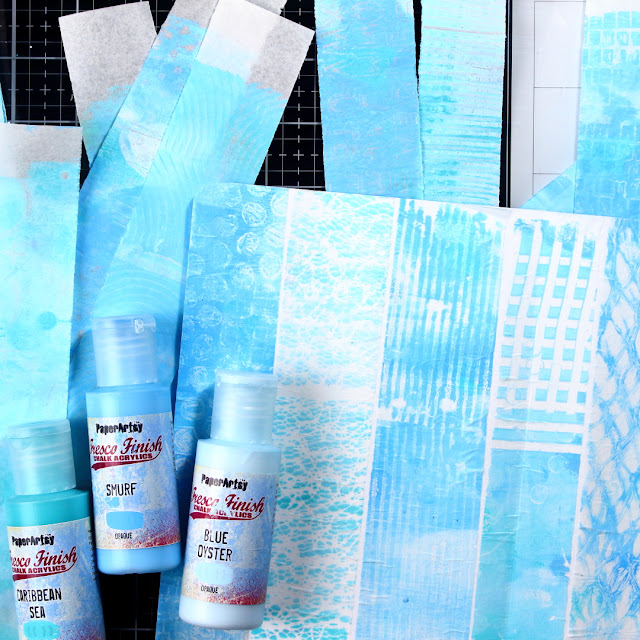 With that, the skeleton of my background was done and now came the time for stamping. On a separate piece of paper, I stamped, embossed and colored the images from the JOFY75 stamp set, as I have planned them for my focal point. 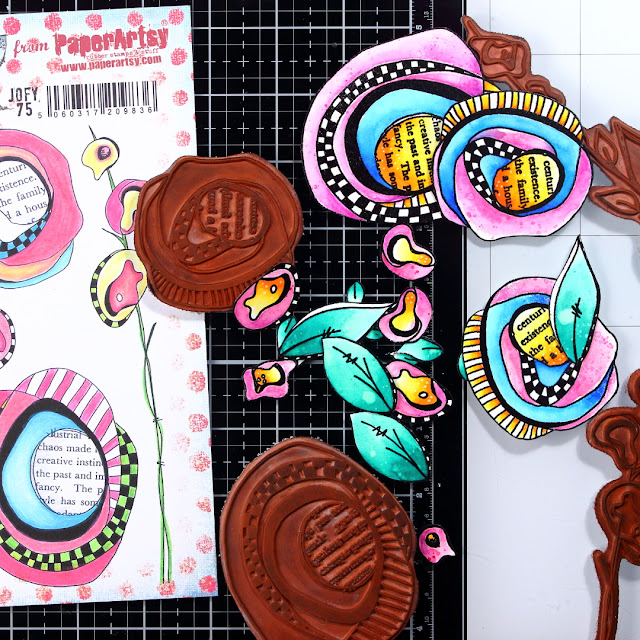 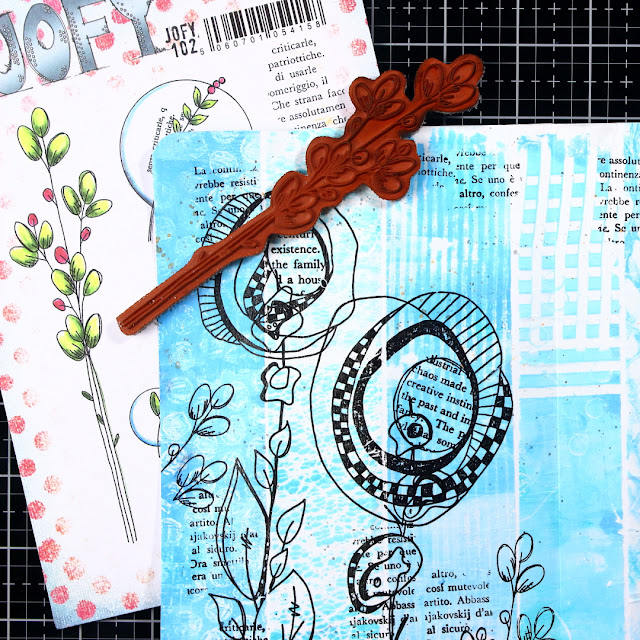 The following step was to add an edge doodle that would complement the patterns of the main images. My idea was to imitate the patterns of the doodles from the stamp, so that they would serve as a connecting element between the focal image and the background. For these, I used acrylic markers and gel pen. 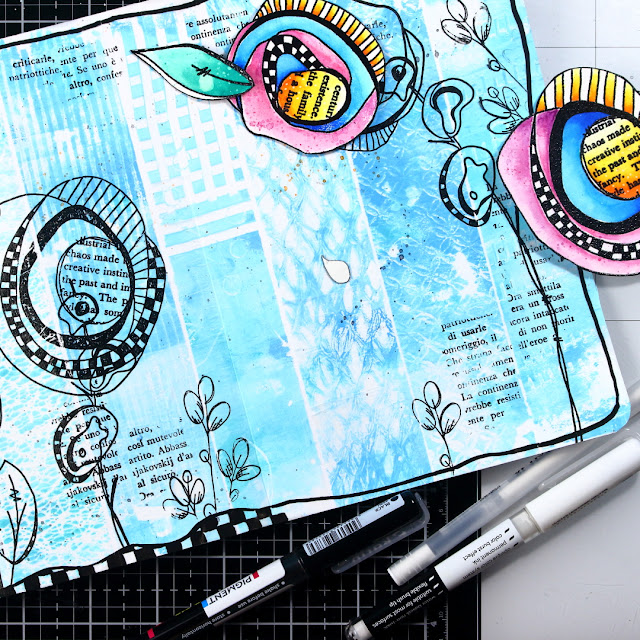 As my background was complete, I decided that it is time to start paper piecing my focal images. 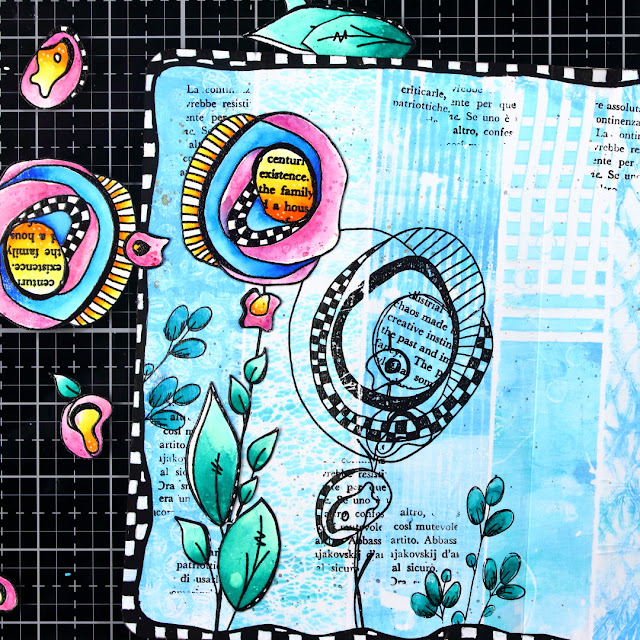 When the majority of my project was done, I felt I need a sentiment to make it complete. I like when my quotes refer to the picture that I have just composed, so I thought that the JoFY PS008 stencil would be just perfect. There was this quote that I heard some time ago “Where the flowers bloom, so does hope” by Lady Bird Johnson, so I have decided to print it out. 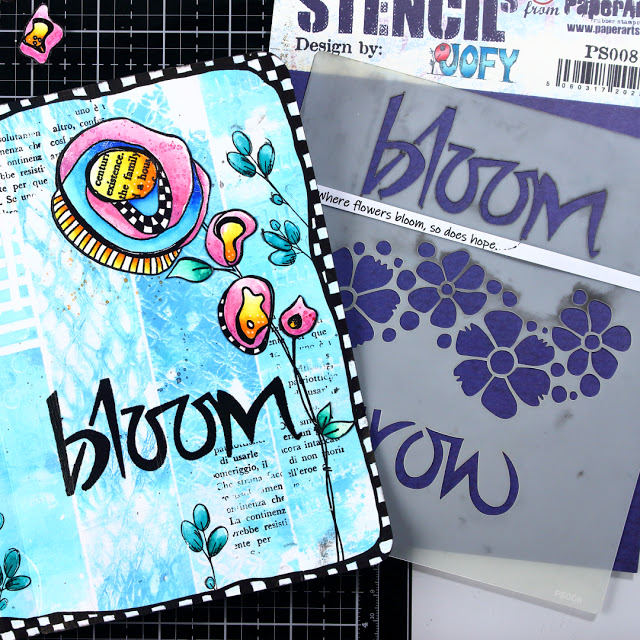 I cut the printed sentiment in to pieces and glued it to a black scrap paper, so that it would give it a frame of a sort. I also tried to emphasize the word bloom with adding some white highlights with my gel-pen. I think, sometimes my impatient nature gets the better of me. Otherwise, when I think back about what I would have done differently is that I would have played with pattern-making some more. I guess, a lot of us have the same regret after packing up our gel-plates…why, oh why didn’t I try the print of that thingy from my husband’s toolbox…or something like that. Also, perhaps instead of the strips I could have cut the parchment paper into little cubes and that way I could have fit more of the various patterns on my background. Anyway, in general I am happy with how it turned out and I definitely love the colors.
Well, this was my first post for the PaperArtsy blog. I hope you enjoyed my creative process and even more, I hope I inspired you to try pattern play in your own ways.

Beautiful project. Love the blue on blue leaves and then the popping flowers.

Henriëtte Creatively Happy said...
This comment has been removed by the author.
February 04, 2022 2:38 pm

Awesome make Renata.
I love your awesome background and
gorgeous colours.
Thank you so much for sharing, stay safe
and have a wonderful day

Thank you guys very much, I appreciate it. :)