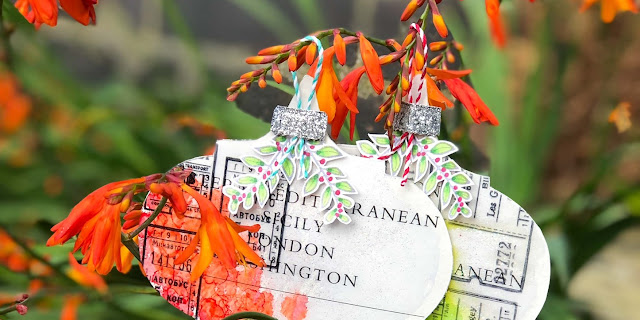 Hi everyone, it's Keren Baker with you today, and I'm here to share with you creating a non-Christmas plus a seasonal project. I wanted to use some acetate bauble shapes and add some stamped images onto them. I was really happy getting to use Gwen Lafleur's new stamps and I am rather inspired by all her ticket images. 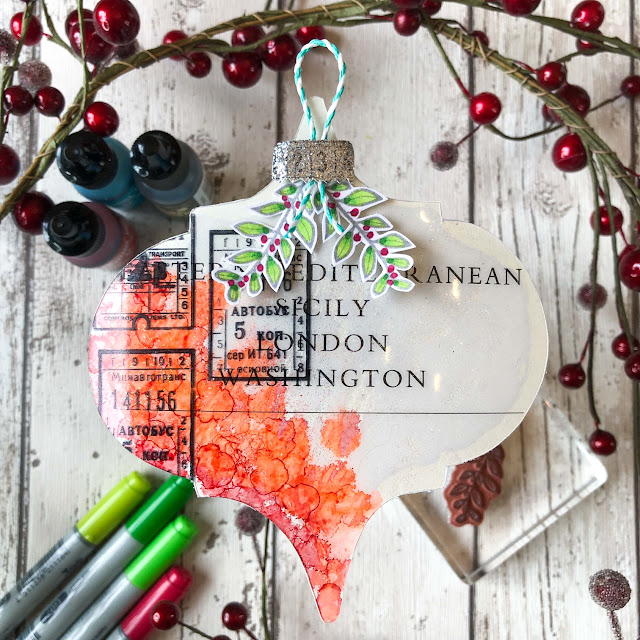 I wanted to do something non-Christmas- (onto that one later!) but the whole idea of using the stamps with a stencilled image seemed perfect. I decided to use acetate with Tracy Scott's PS159 stencil (because I never tire of acetate...ever!). 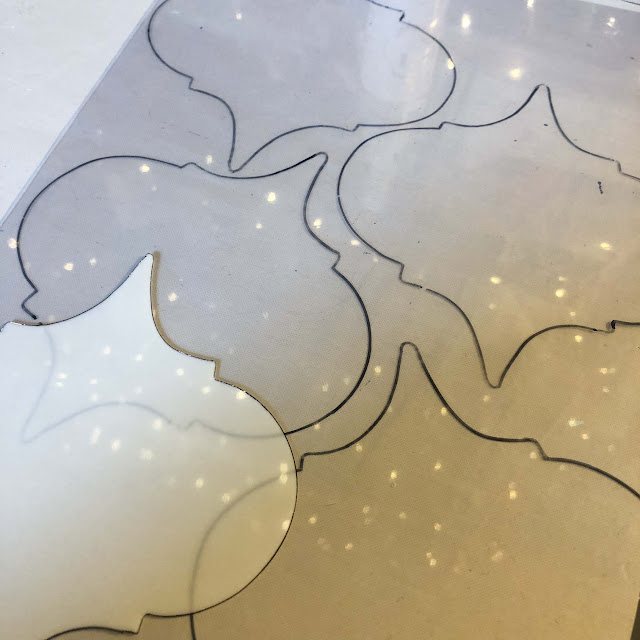 A little useful tip- find acetate with a removable thin film, so you can use a permanent pen to mark the shape onto the filmed side and when you've cut it out, removing the film takes the remnant of pen away. 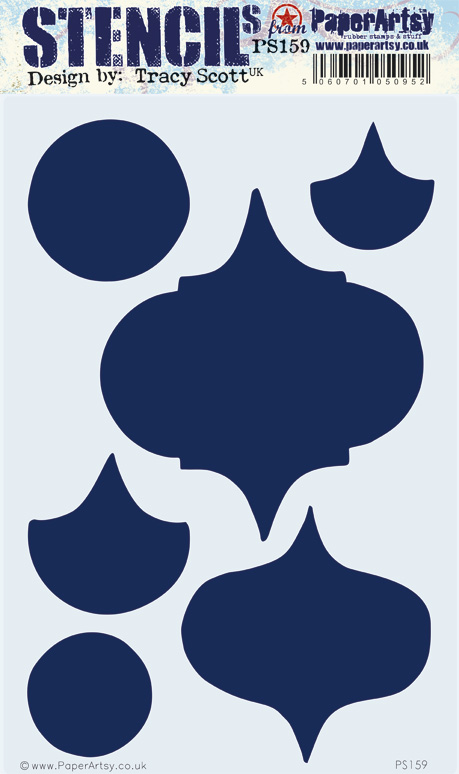 I added alcohol ink to one side of the cut out bauble shapes and added some stamped tickets randomly on the reverse. I stamped with Stazon ink on the opposite side as otherwise it would have reacted with the alcohol ink and I didn't want to use Archival Ink straight on the alcohol as it'll ghost the image which I didn't want. I used EGL17 with these awesome tickets.
Now I grabbed as modern a book as I could find so the pages were whiter and auditioned them. I found the pages with less text looked better and let the beautiful ticket images shine. 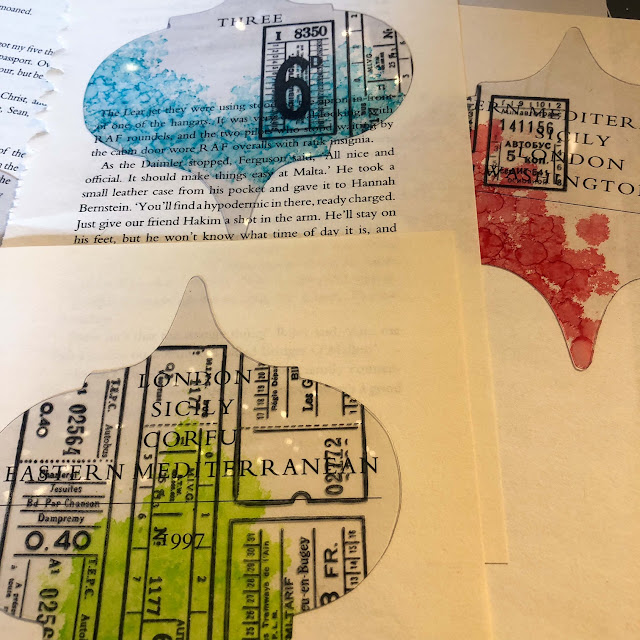 I wanted to give the baubles 'bling' so added some Glossy Accents to the reverse of the stamped image and left 0.5cm around the edges to allow for seepage. Sprinkle some glitter on, flip it over and straight onto the book page. 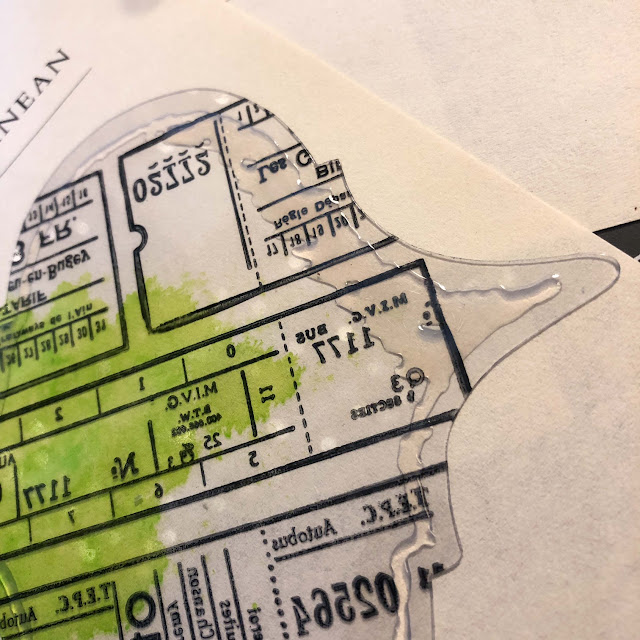 It's quite like the 'caught in crystal' technique, and after trying different amounts of Glossy Accents, using it in a scribbly fashion rather than aiming for full coverage meant less seepage.
Leave to dry completely, trim and then add decoration. Stamp out the leaves; it's amazing how just colouring any foliage red and green gives it a Christmas vibe. 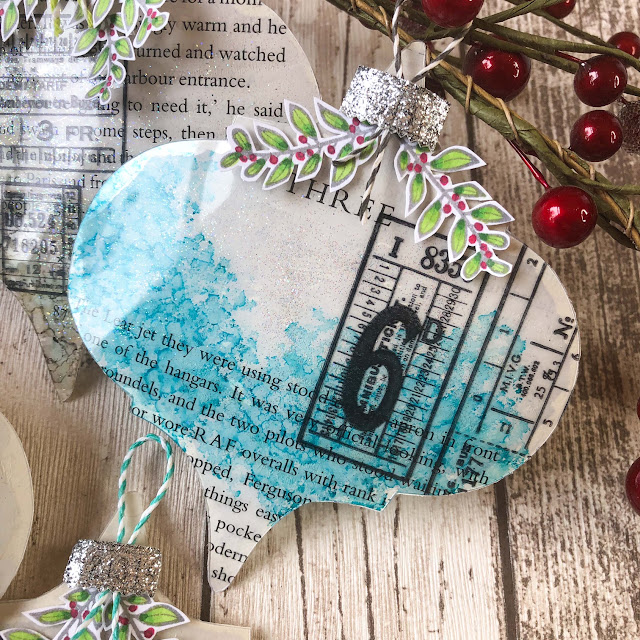 It's not easy to see but I've used one of the images to stamp onto glitter cardstock. Using Stazon meant it dried but the rough texture obscures the image slightly. I trimmed some tiny 'v's along the bottom edge to make it look like a bauble top. 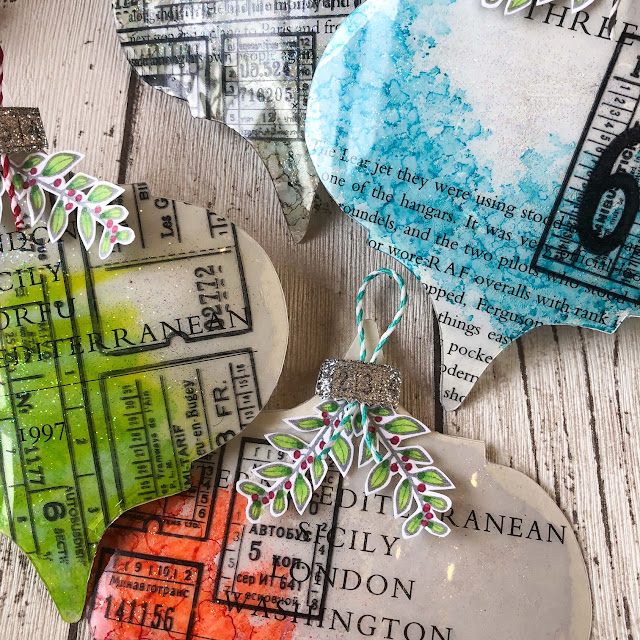 I could imagine these as tags too - you could write on the reverse. 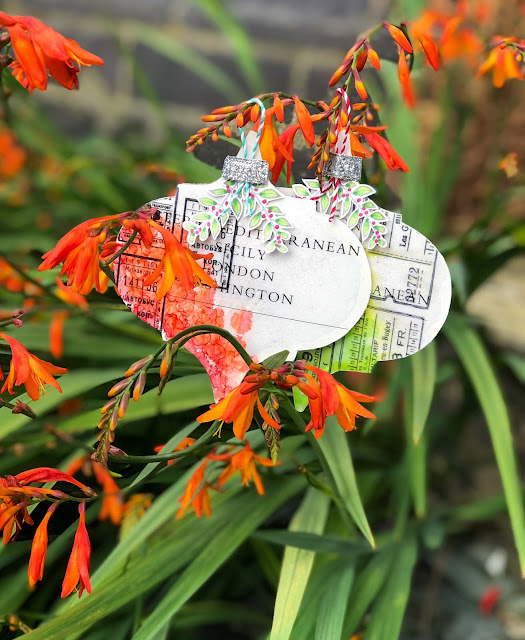 My second project was what I planned originally but when I used the larger bauble outlines on it looked too big for the journal cover. So onto the next one, using the smaller bauble outline on the stencil.. 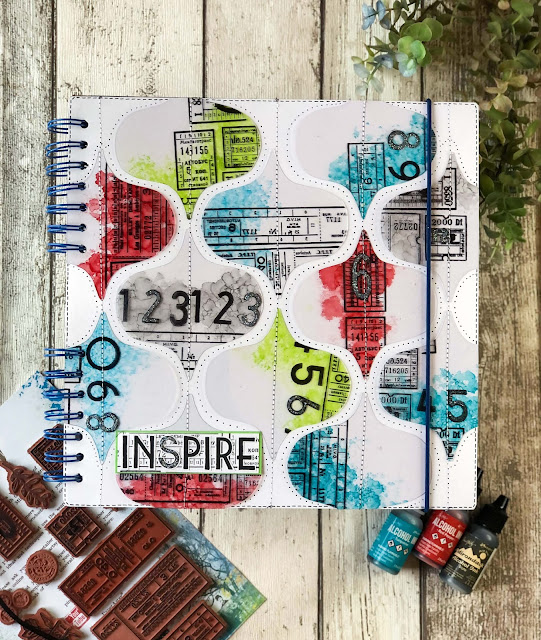 I followed the same process but didn't use the Glossy Accents. I laid the pattern out how I wanted it to look on the book. 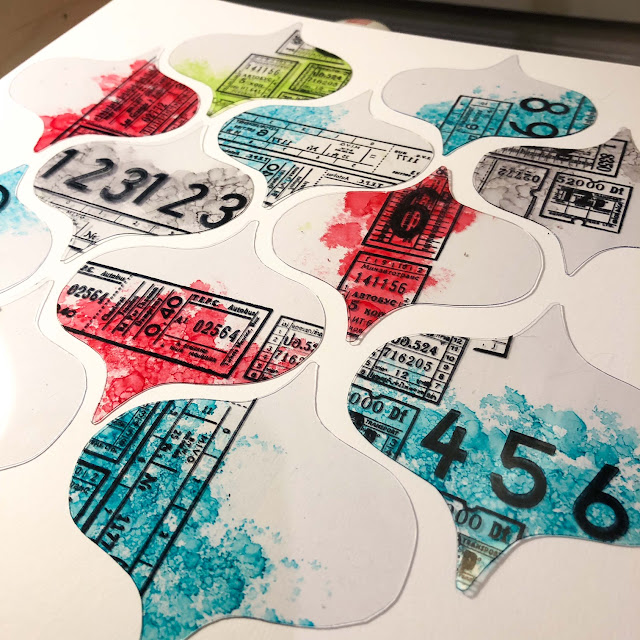 I wanted to use some of the numbers and letters from EGL16. I really love the 20's feel they have to them whilst still retaining a modern bold look. 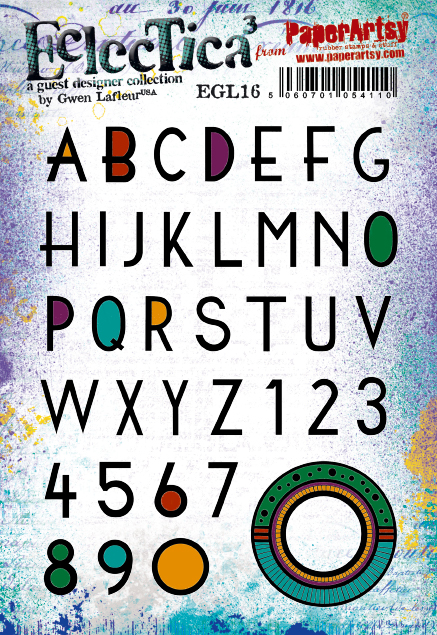 I had an old rather ugly journal that needed a facelift. I decided that the only realistic way of attaching the acetate 'baubles' would be to sew them to another piece of cardstock. I trimmed the base card to size and after laying them out, added a tiny dot of glue to stabilise them before sewing. Sewing slippery surfaces is generally a recipe for disaster, even using a Teflon foot, so I used some baking paper to sew over using a longer length stitch that I could simply tear away afterwards. 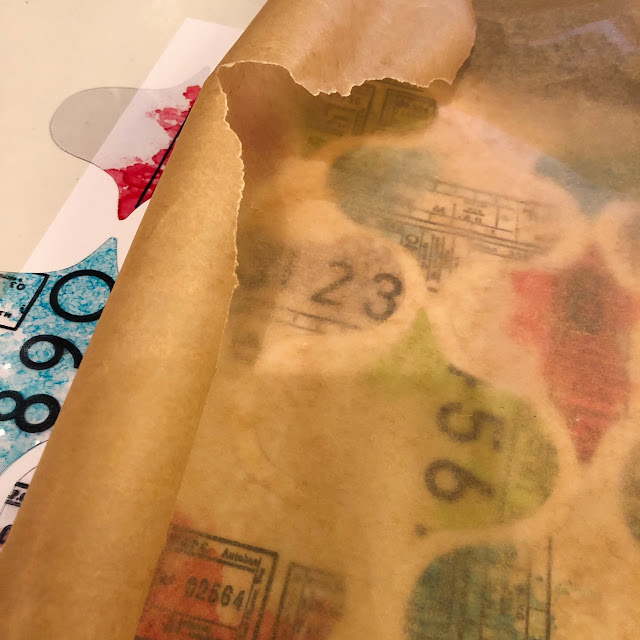 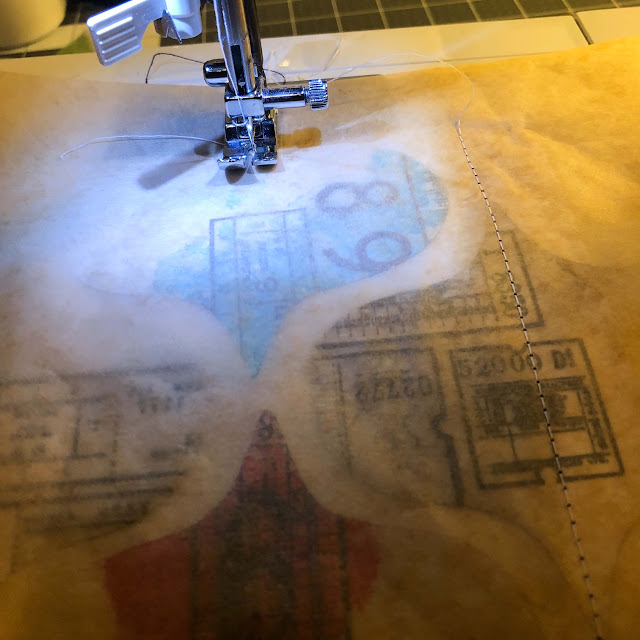 To add a little glitter, I traced around the letters and numbers on the front. Having used black ink, the translucent glitter just looks sparkly black. 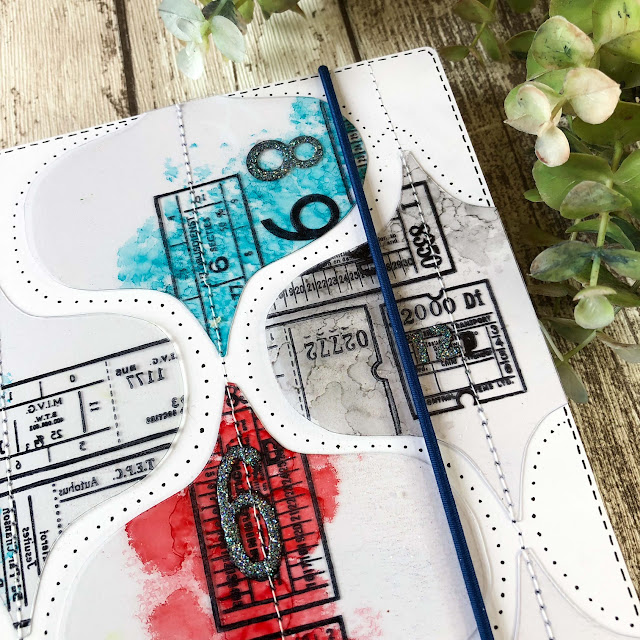 Glitter tends to get everywhere, sticking to the acetate, so you end up with extra sparkle! I now wanted to add a title, and some dots and dashes. For the title, I stamped the letters and trimmed them out adding them to a ticket stamped background. 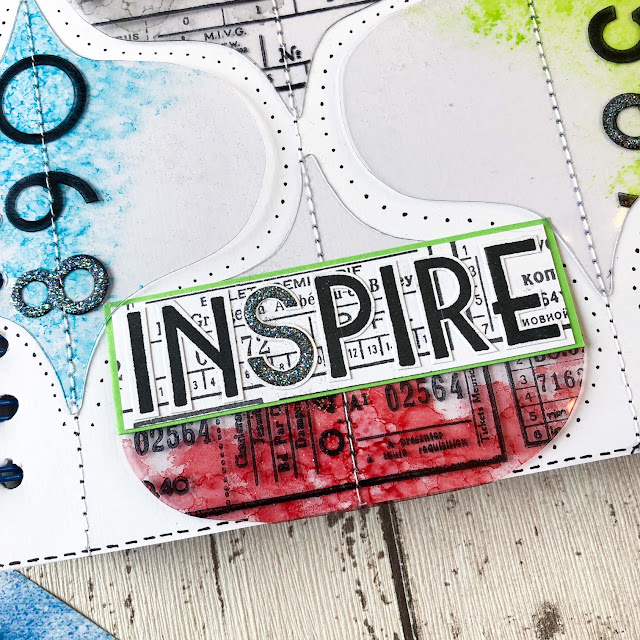 There's nothing complex about the projects, just light and bright finishes. Gwen's almost vintage and bold images are wonderful to use and you can make them modern and clean or rich and even vintage. 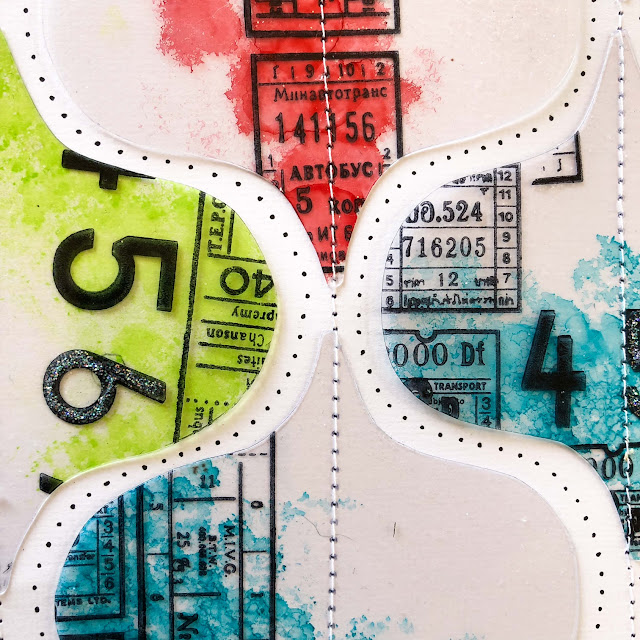 One of my favourite challenges is trying to solve the problems that come when using tricky substrates, and how to combine different products but still let individual ones shine.
Creativity isn't always artistic, it's sometimes more to do with 'work arounds' and choosing new paths.
Gwen's new sets are super versatile and I can see them becoming go-to sets both for focal points and backgrounds too.
If you've never used acetate before, do try creating with it. I love the dual sided nature of the product - planning how to combine images and colours so they work together. Dig out your glitter or microbeads (that's my next project) to resurrect the 'caught in crystal' technique and see what you can come up with.


Thanks for being with me today,
Keren x

You always come up with the best ideas!!!

Absolutely gorgeous Keren. So much detail and I adore them!

Many great idea for the baubles Keren, especially love you have made the tag baubles using Gwen's new ticket stamps. Fabulous the journal page too!! xx

I agree... these turned out gorgeous! So much beautiful detail and awesome photography..
hugz Ellie

These projects are unbelievably cool Keren! The baubles are absolutely gorgeous and I love the text showing through the transparent ink blobs. Such a cool idea and great way to use the stencil. As for the stitching, over the top, utterly wonderful, brilliantly executed project! Kudos and thumbs up to you! xx, Autumn