Keren's brain seems to sprout ideas as easily as a mushroom growing in the dark! However, this one seemed to have her scratching her head a fair bit. Now I know what her stencilling onto fabric cryptic emails were all about! ~ Leandra


Hi everyone, it's Keren Baker with you today, and I'd like to share with you a slightly 'marmite' bag that I loved creating using recycled materials. I wanted to try painting on denim and Darcy's Mushroom stencils were perfect for this piece. I've painted on fabric with Fresco Finish Chalk Acrylics before, but not on anything as textured or tough as denim, so was interested to see how it would turn out. 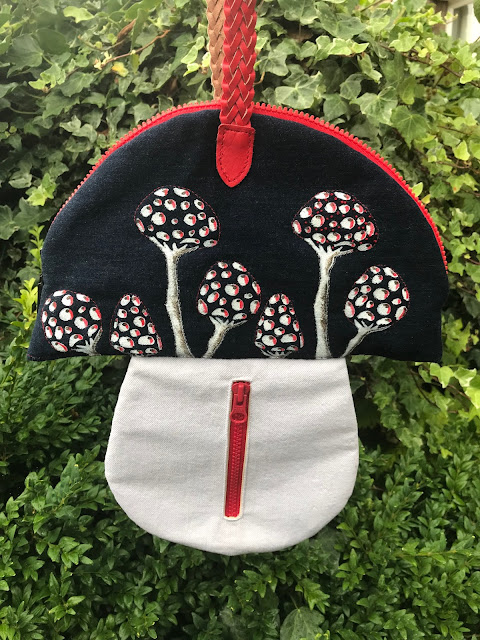 To begin, I created a template and then cut out two denim tops from blue jeans, 2 mushroom stalks from white jeans and had a red belt on hand. I'd bought them all from a charity shop. 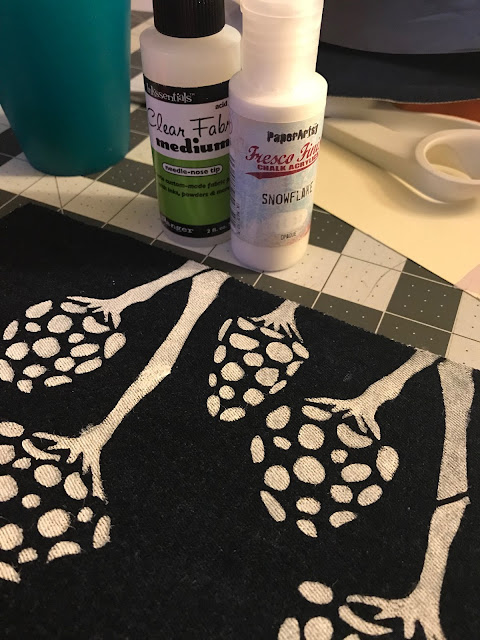 The first stage was pretty easy. Sponging Snowflake Fresco through PS104 by Darcy. 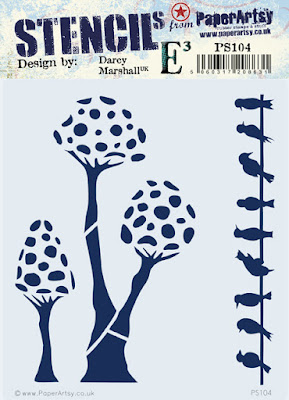 I began with adding roughly 1:1 paint to Ranger Fabric Medium. It needed a couple of layers. Snowflake is opaque but there is a little 'sinking in' to the fabric initially. Leandra recommended dampening your fabric for small areas at a time when painting fabric, particularly for colouring in a stamped area.

With a stencil it's hard to limit the damp areas, and I wanted a clean crisp edge, so had to do a couple of layers of paint instead. The fun came next, as I debated how to get London Bus (which is a translucent) onto the base and to still be a bright red. I consulted the oracle again, and Leandra said to mix the colour with a little Snowflake, paint it on and then when dry, add the final colour of pure paint colour, London Bus, on top. 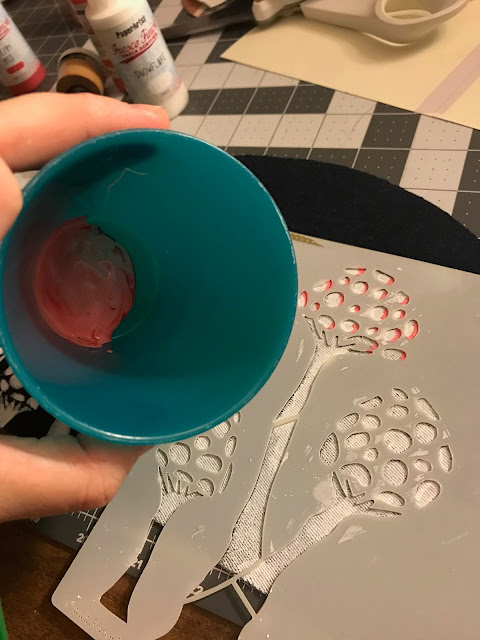 Well it worked. Perfectly! I was only adding a smidge of red. Mushrooms are often red topped with white spots, but I was using a stencil, so rather than paint in between where I'd stencilled, I opted for an illusion of the mushroom. 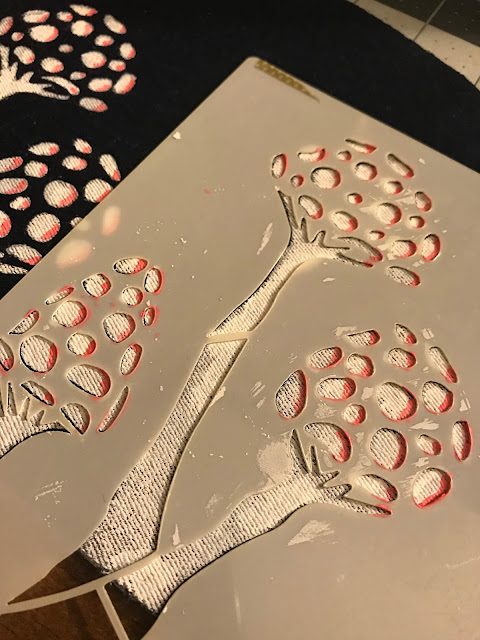 So far, I'd used only 3 colours: Snowflake, London Bus and French Roast.

Usefully, the denim provides great texture, so I only needed to dry brush the French Roast colour on and it just did its own thing, gently seeping into the valleys. 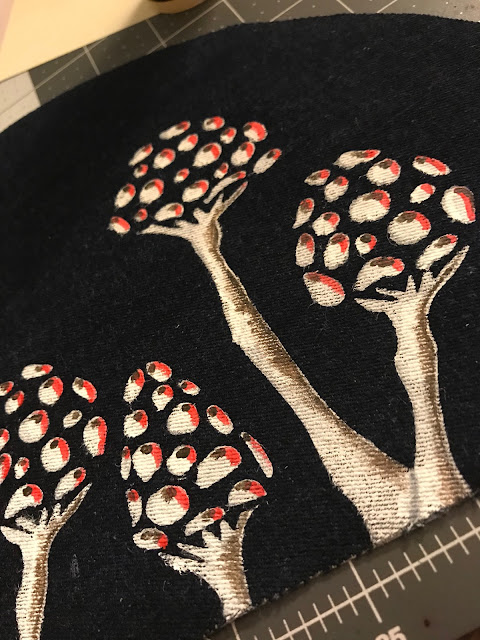 Following on with recycling theme, I added some recycled interfacing. Vlieseline has recently brought out some interfacing using mostly recycled products so you can feel good about using it too. 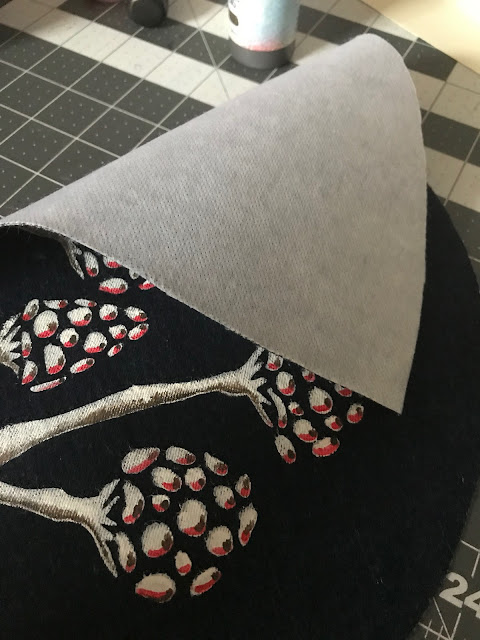 Truthfully the next part was a nightmare. I do like creating pieces that evolve. The amount of head-scratching involved nearly drove me to throw it in the bin. Trying to work out how to sew the piece up was really hard. I took a few decisions in the wrong order, but managed to solve most of the problems and used the belt as the handle by unpicking some of it and reassigning it somewhere else! 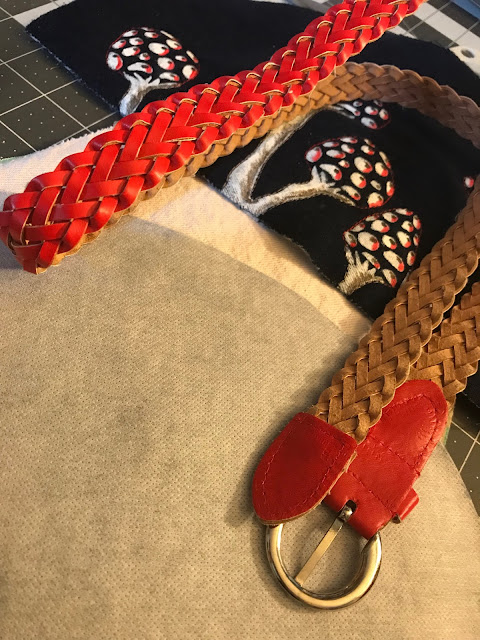 The bag is pretty quirky and so I decided as the bottom was roughly the same size as the top, if I made a bit where it could be folded back, it would make the mushroom, less mushroomy and a little less weird!! In this configuration, my kids are happier to accompany me and the bag. 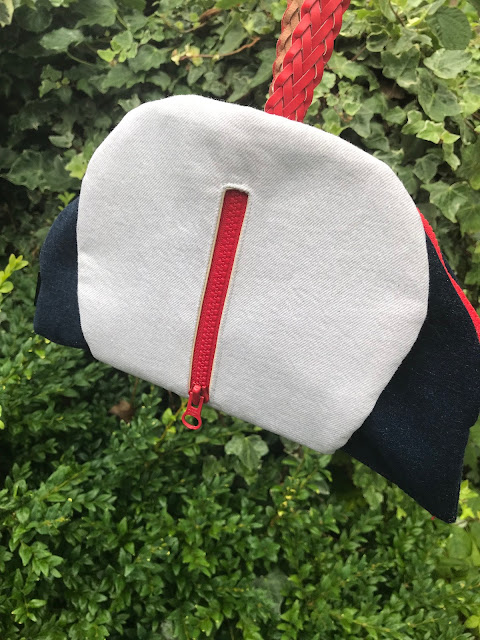 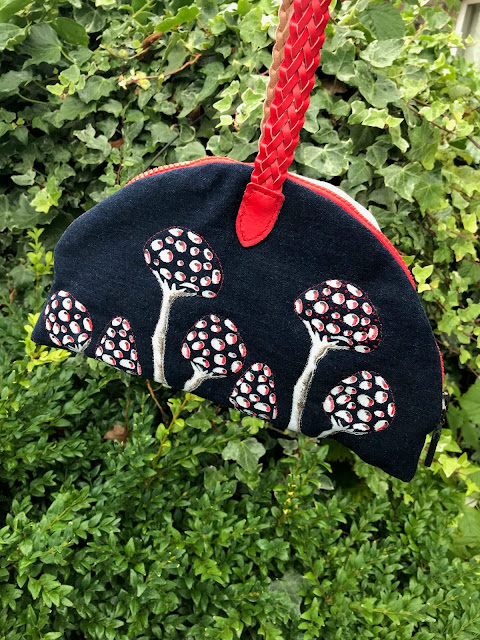 The inside shows the top mush'roomier' section; suitable for fitting your phone sideways. Due to the slim nature of the inside stalk, not very much will fit in there other than keys and makeup!! You can see my mistakes. Had I made all design decisions in a timely fashion, I'd have hidden the stitches inside! 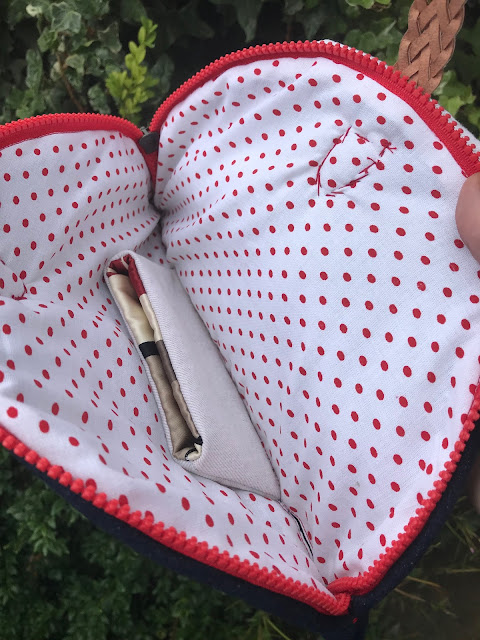 I wanted to add a little more texture. I'd already stitched around the edges of the mushrooms to help make them more distinct from the denim and give a quilted effect. It did feel fairly finished already, so I simply added some french knots onto just one mushroom and called it done! 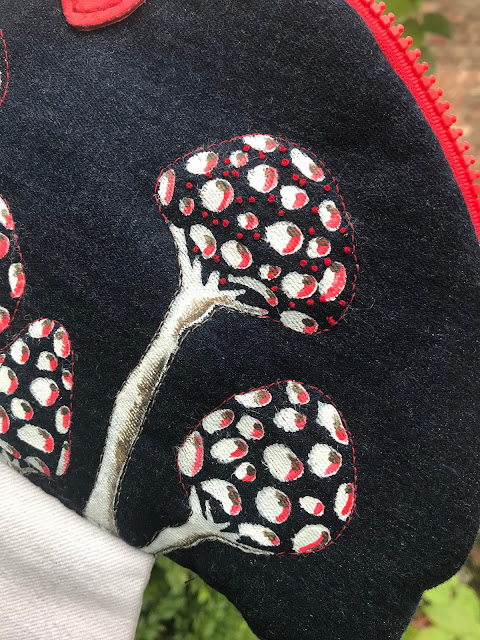 It's great having the basic idea of where you're going and making design decisions as you go along, but it would be much less stressful if I'd worked out every layer and order in the first place (but where would the fun be in that!!). I loved stencilling on denim. Due to time constraints I didn't add a layer of Fabric Medium over the stencilled areas once I'd finished, but I'd recommend you did that for keeping the painted areas from cracking and wearing. Stencilling onto fabric is definitely something I want to do again soon, but perhaps onto an already created piece!

What a fabulous bag Keren. I love it! So clever.

Oh! What a stunning project Keren, so lovely bag with Darcy's stencil and great idea. xx

This is absolutely incredible, Keren, I really admire you. I think you should decide if the children are cool enough to be seen out with you!

This is so fun, totally weird and wonderful. Painting on denim is great, but challenging. I think the finished bag has so much character.

Such an inspired idea and fantastic creativity, Keren that has resulted in such a cool and funky bag. Always love a creative project thats useable.
Loved reading your post . Thanks for sharing lots of hints and tips along the way.
xx