Hi everyone, It's Pam Thorburn here, joining you this evening with a post about Brushos. Brushos are so much fun to play with. What I really love about them is the surprise element. These little puffs of powdered pigment can be used in all sorts of ways, and sometimes have a mind of their own. That's what make them fun!

Tonight I have two art projects to show you. The first is the project I had originally conceived, and the second came about because I had lots of Brusho experiments that I felt I should do something with. 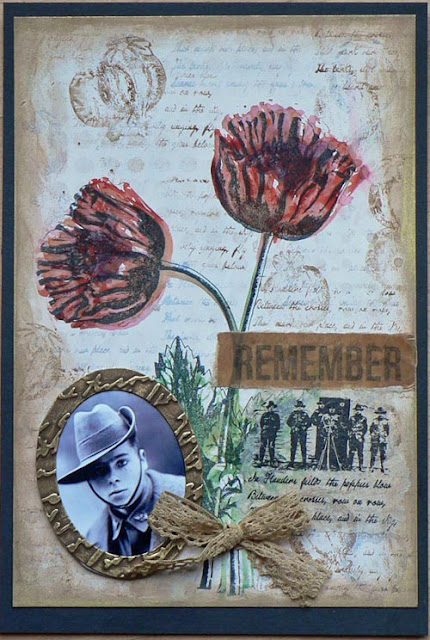 The inspiration for my first  project came from the gorgeous Poppy stamp set HP1505 ...

...which lends itself to commemorating those soldiers who fought for their country.

Step One: To create the background I sponged some card stock with some Fresco paint in Stone and Nougat, then used a spot stencil with Toffee Fresco paint. Then I used the seed pod and script stamps from HP1505 and stamped them with Chocolate Pudding paint. Finally I knocked back the colour a bit by sponging some diluted Nougat paint over the whole page. 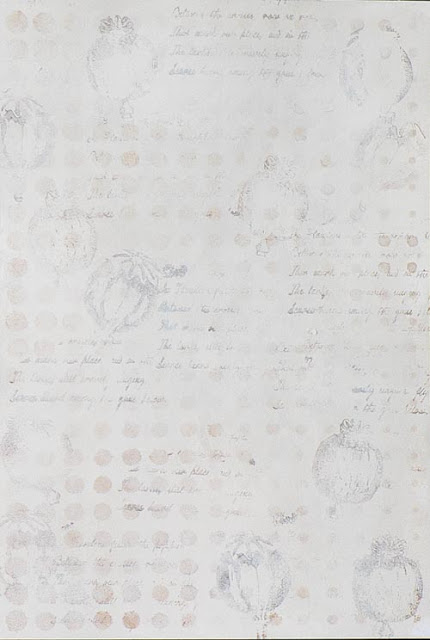 Step Two: Now for the Brusho. I was after a water colour effect here. I spritzed some water onto the stamp and sprinkled some red Brusho onto the flower and some light green onto the stalks and leaves, and spread it around the stamp with a paintbrush before stamping. I actually stamped the flower part 3 times, overlapping slightly each time as I didn't want a crisp flower image. One of the great things about this stamp is that it is easy to bend the stem as it adheres to the acrylic stamp block. That's why one poppy has a straight stem and one has a curved stem. 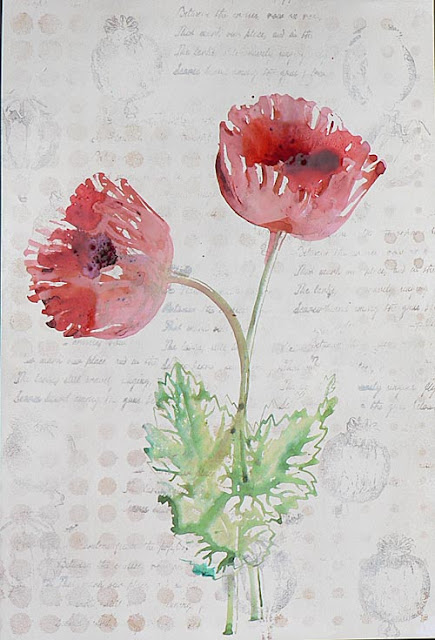 Step Three: I over stamped the  image using Stazon ink, then sponged some Toffee paint around the edge of the piece. The 'REMEMBER' stamp is stamped onto Crunchy waxed paper and the soldier image from the HP1505 is stamped onto tissue paper. The frame is made from a die cut oval which I embossed in a script embossing folder, then painted with Chocolate Pudding fresco paint and highlighted the script embossing with Spanish Topaz treasure gold.

So that's my Remembrance piece. I hope it's a fitting memorial to this young ANZAC soldier.

As a result of playing around with Brushos while coming up with the above piece I ended up with lots of different backgrounds, so I decided to put them to good use and create a collage: 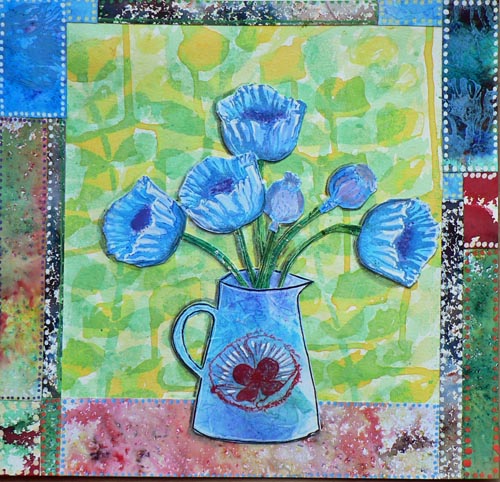 First I'll show you how I did the background, then I'll talk about the some of the techniques used for the collaged frame pieces.

Step one: I mixed three colours of Brusho powder with water making three little puddles of Lemon, Yellow and Light Green on my palette. Then I used a brush to paint blobs of the colours, overlapping and dripping the colours as I went. 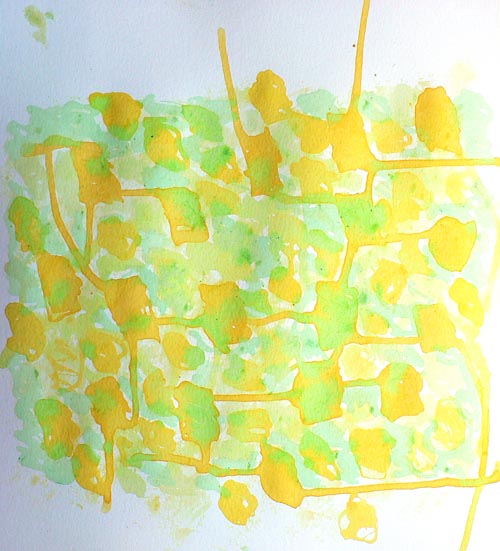 Step two: I mixed some Emerald Brusho powder and water into a small spray bottle and spritzed it through a Stencil Girl leaf stencil. 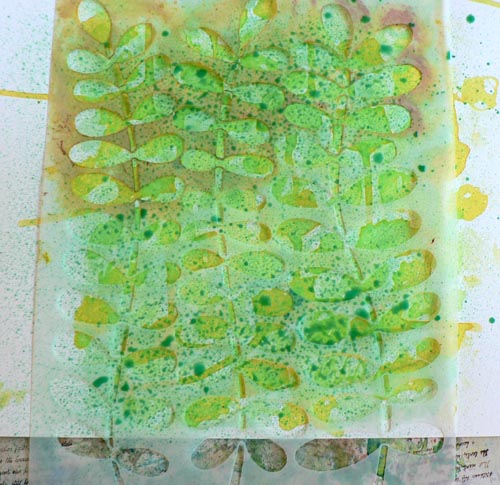 Step three: The collaged frame pieces were made from a cutting up a number of my experiments including spritzing card stock with water, then shaking on Brusho powder, and also doing the opposite, ie. dropping on powder, then spritzing with water.

A third technique is this one below. First saturate card stock or glossy paper with water, then sprinkle the Brusho powder into the water. Move the colour around with scrunched up cling film and leave the cling film in place while the card stock dries-overnight is best. (The piece below is one of my rejected experiments). 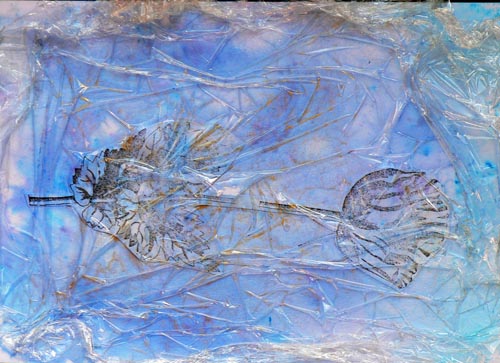 Step One: Create and assemble the focal image. First the jug. The jug is using the cling film method from above. Draw a jug on the back of the card and cut out. Cut around the front rim of the jug and adhere the small back section, then the flower stems, then adhere the from large part of the jug over the flower stems. 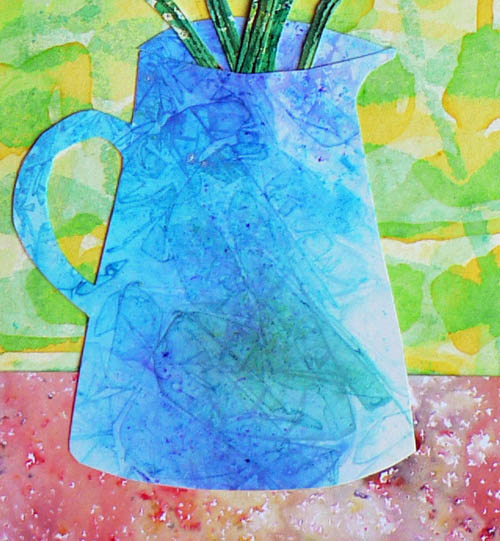 Step Two: The flowers: I found it easier to stamp the flower heads and the stems separately, and reassemble them into the vase later. The flowers were done by first stamping with a mixture of China  and Blue Glass Fresco paint onto  smooth white card. When the paint was dry I went in with some Ultramarine Brusho and filled in the white spaces. The stems were stamped with Tinned Peas. 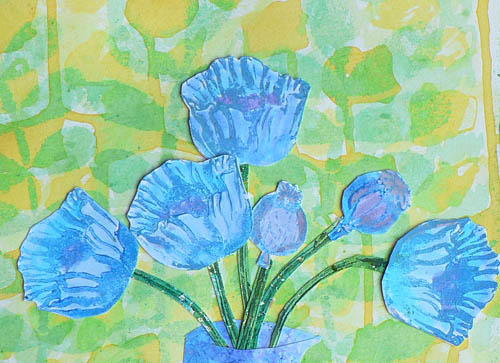 At this stage the collage looked a bit flat: 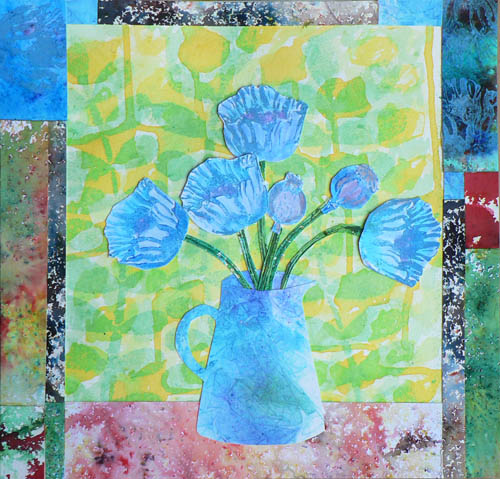 Step Three: Finishing details. Using London Bus paint, I stamped the red poppy onto tissue paper and adhered it to the jug. I outlined the jug with a fine black marker and put some in shadows around the jug and flowers using a black watercolour pencil. I added some white highlights and some dark centres to the poppies using acrylic marker pens, and used the same pens to add some dots to the frame.

I really enjoyed using this stamp set and playing with Brushos. I think I have succeeded in making two pieces of art that are quite different in feel even though they both use Brushos and the same stamp set. If you've never used Brushos before I really do urge you to have a go. They are not expensive, as a little goes a long way, and there are so many different techniques for using them. They are just pain fun!!

Ohhhhh Pam, what a fabulous use of brushos. You have used them in such a controlled fashion, they look wonderful, and I LOVE your Anzac card!.Thanks Pam for showing 2 very different ideas!!

We would love you to join in with challenge #17: Brushos. If you are inspired by any of our guests who have blogged on this topic over the fortnight, then please join in and link up your creativity HERE.

All links go in the draw to win a voucher to spend on products of your choice from the PaperArtsy online store. This link will close 19:00 (London Time) Jan 17th 2015.
Posted by PaperArtsy at 18:00

Fabulous Pam!! I love the idea of using the brushos direct onto the stamp, and it gives an amazing look.

Brilliant! The stamping with the brushos gives such a cool effect!!

What a lovely effect with the poppies, Pam!

I love the looseness of the jug of flowers - delightful!

Love both these pieces Pam xx

Loads of really great techniques there Pam. So interesting to see how you pull everything together. Lx