Hi everyone Wanda here joining you this evening with a post about painting on a t-shirt and shrink earrings to match.  When I saw the upcoming theme, wearable art, I immediately knew I wanted to do a t-shirt.  I hadn't done one in years and it was about time.  When I'd finished the t-shirt, it just seemed to make sense to have matching earrings so you get a bonus project in this post. 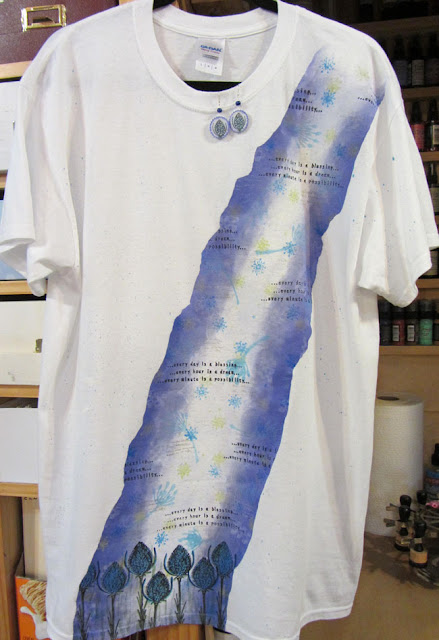 Step One: I washed the t-shirt using no fabric softener, dried and ironed it, laid it out, put freezer paper inside to protect the back of the shirt from paint, and used blue painters tape to mask off an area for painting.  I tore strips of tape in half positioning them down the shirt so I would have a torn edge look.  After these were on I added a full strip of tape along both sides so I had a wider margin to protect the shirt. 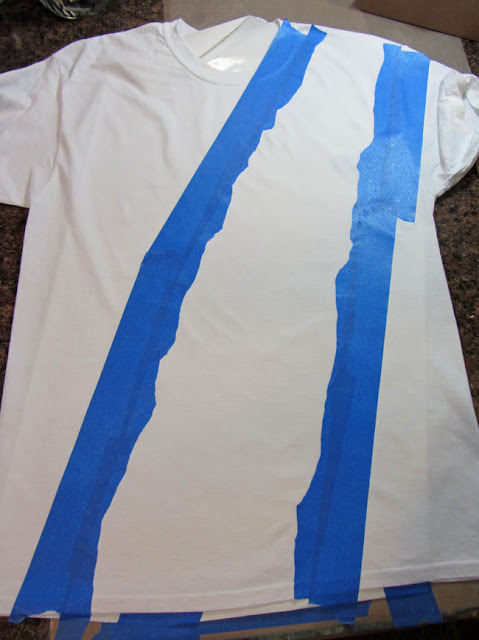 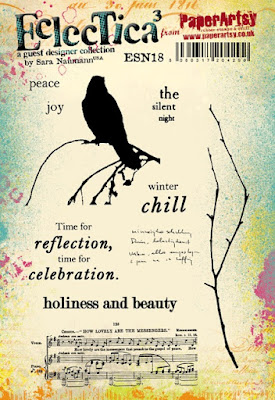 Step Two:  I mixed Golden brand fabric painting medium, GAC-900, with each of the Fresco Finish paints I used (except when I used little black dress to stamp with) as recommended on the bottle, a ratio of about 1:1.  The colors of Fresco paint I used to paint the background were snowflake, wisteria, and lavender.  I used both a sponge and a brush to blend and work the colors.  I stamped my first image with smurf (mixed with GAC900).  In areas that were still fairly wet the image bled, which bothered me at first and then I decided it looked good for this project.  It was a good lesson though and I was sure help along some areas with my heat tool when I was sure I didn't want any bleeding.

You will also notice all the scraps of paper covering the shirt.  I thought I'd be fine until I got paint where I didn't want it and realized I was just too messy and needed to cover up more of the shirt :-) 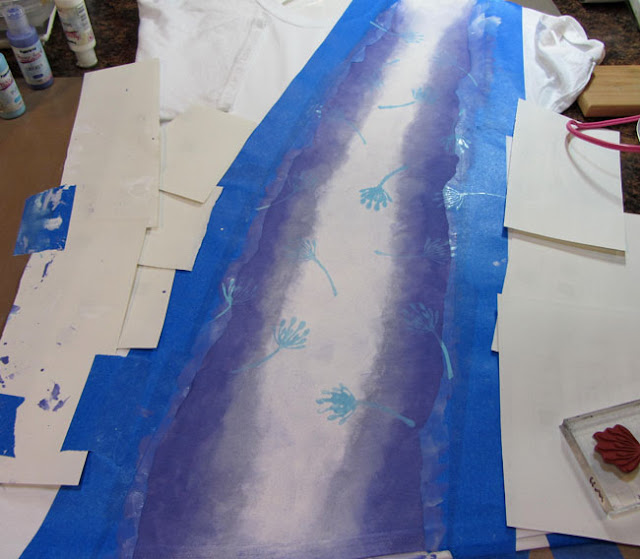 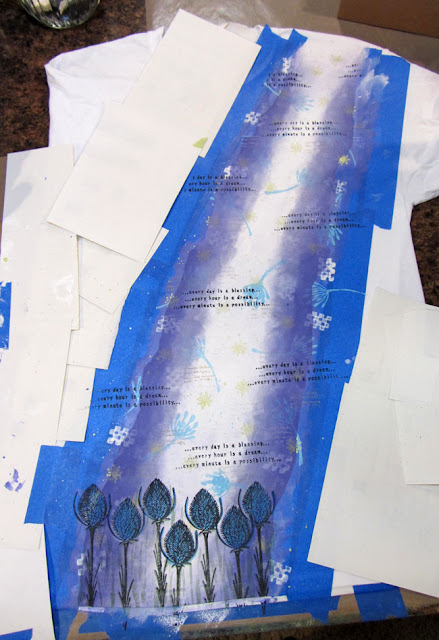 This picture shows how I spread the paint on my craft sheet to stamp into and then stamp on my project. 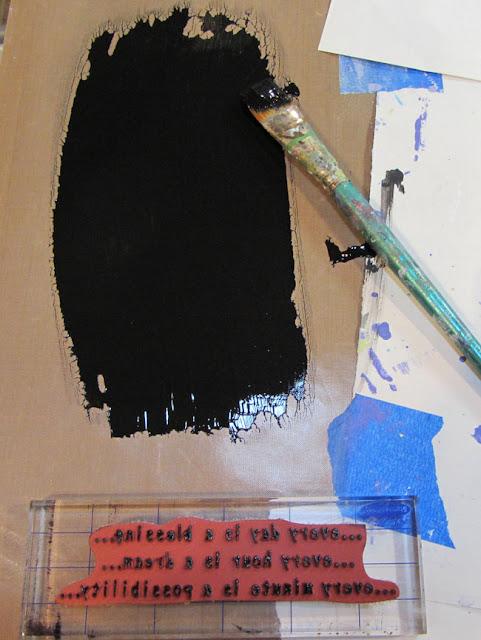 Step Four:  After leaving it sit for a bit because I just wasn't sure I was happy with it, I decided there wasn't enough going on and I needed more in the background.  I used the small flower head again, this time stamping with glass blue (mixed with GAC-900), much better. 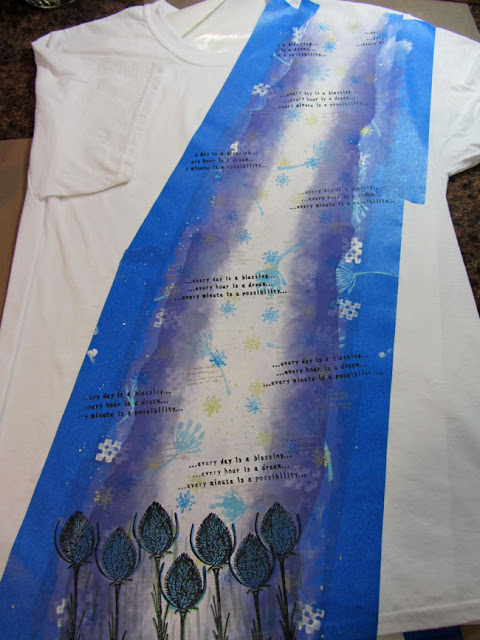 It was now time to remove the tape and see how it really looked.  I was quite pleased, except for the spots of smurf paint that didn't belong. 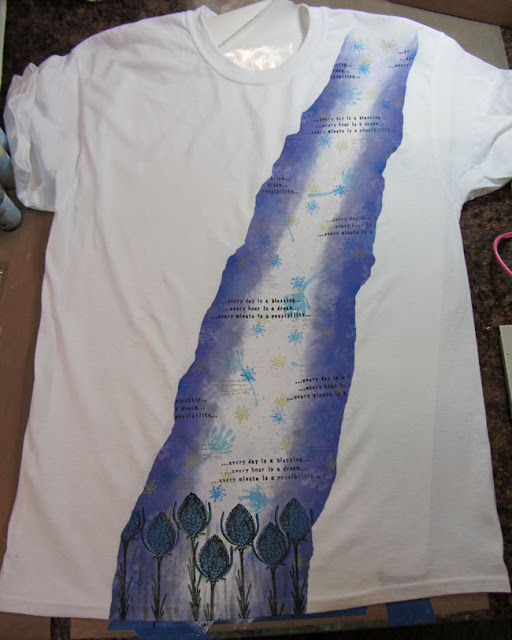 Step Five:  To hide those spots I splattered smurf (mixed with GAC-900) over the whole front of the shirt.  There are also two spots of snowflake (larger spots where I set my paint brush in the wrong spot), but those will just have to be what they are.  I let the shirt dry completely and then heat set according to directions.  I actually did two of the choices.  I ironed the main area and then also popped it into the drier so all the extra little splatters would be set (I could have ironed those also but chose not to). 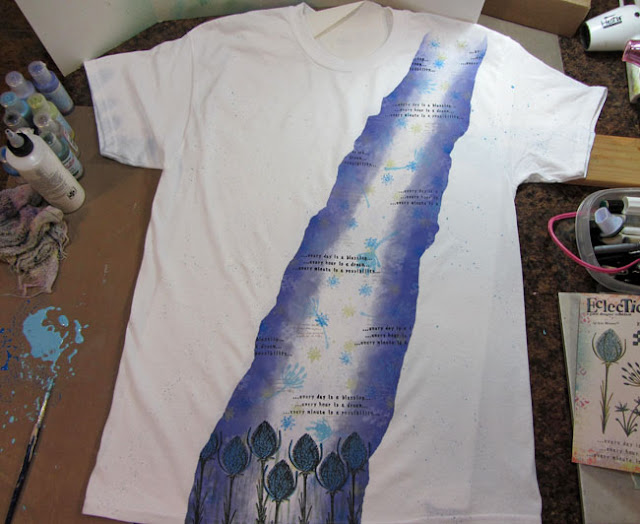 Earrings Step One:  I sanded one side of clear shrink plastic, painted on a thin layer of snowflake paint, let it dry, stamped the flower with Archival Ink watering can, punched out the flowers using a 2 1/2" scalloped circle punch, and punched 1/8" holes in the top. 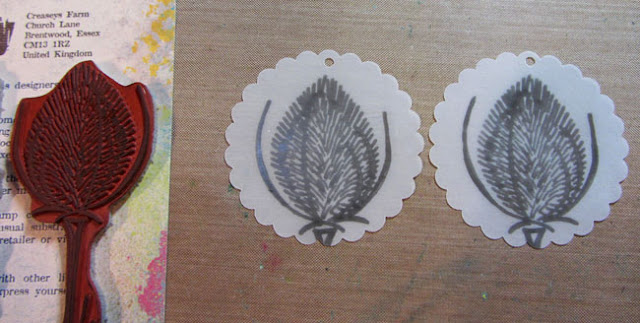 Earrings Step Two:  I used the oven, set at 325 degrees, to shrink the pieces.  I set the circles on a piece of chipboard and put them in the oven.  When they were shrunk I took them out and set an acrylic block on them to be sure they were flat.  I did not push down on the block, just set it on top. 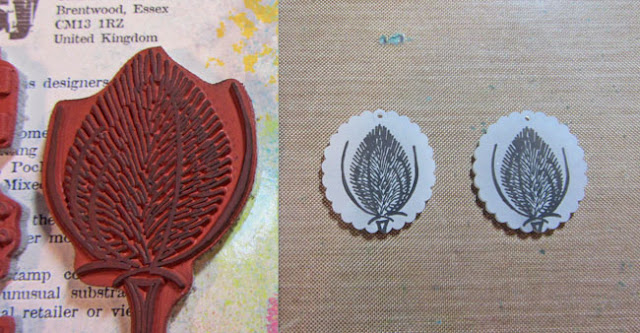 Earrings Step Three:  The flowers are painted with glass blue and hyde park.  Around the edges are wisteria painted on and lavender sponged on.  Next I applied two coats of satin glaze, one brushed horizontal and the second brushed vertical, allowing the coats to dry in-between.  I then decided I wanted to go glossy instead of satin, but first... I somehow had one little white dot on one of the circles and as I was glazing them it became more noticable. I thought about starting over but instead made more dots.  This was done with a Posca paint pen.  I finished up with four coats of gloss glaze alternating between brushing vertically and horizontally and letting each coat dry completely.  I used silver findings and a bead for each earring. 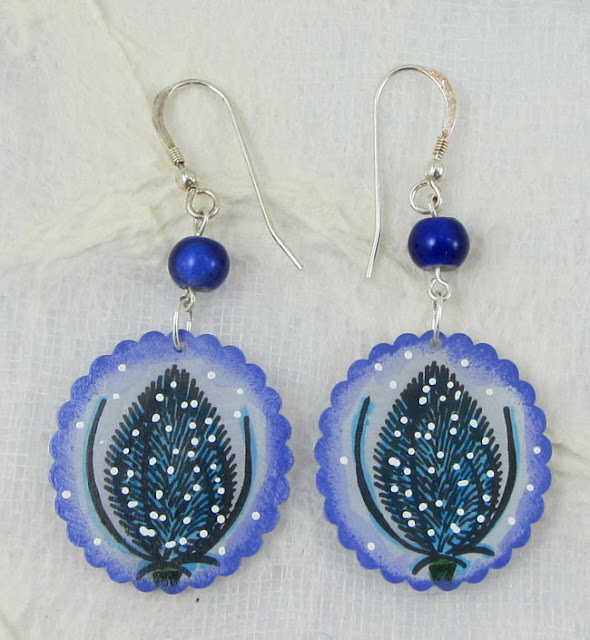 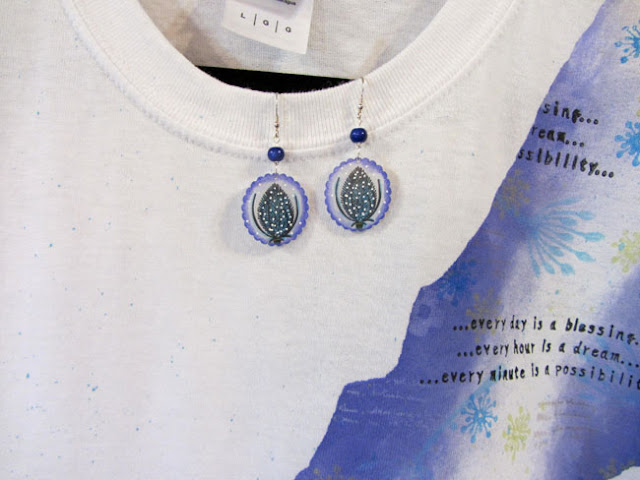 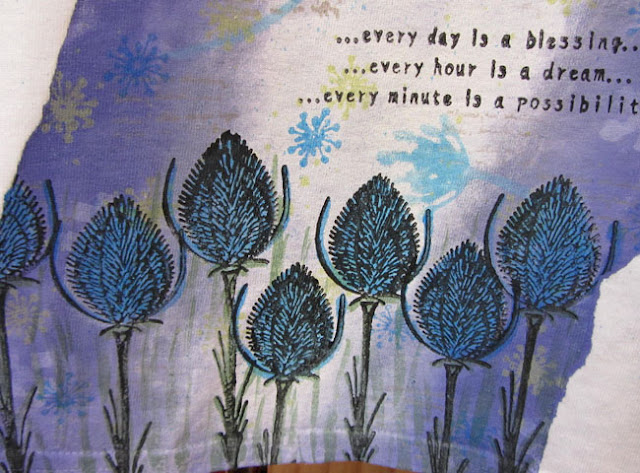 The directions for washing after painting is to wait at least four days before washing the first time.  I did this and then washed it on cold, partially dried it, and hung it to finish drying.  It came out great!!!  It's slightly stiff in the areas that I got a lot of paint but not too much to wear.  Golden recommends using their airbrush fabric medium for heavier applications.  I hadn't planned it to be heavy and I'm sure if I had only used a brush instead of sponging paint in the background, the application would have been much thinner and there would not be some stiffer areas. 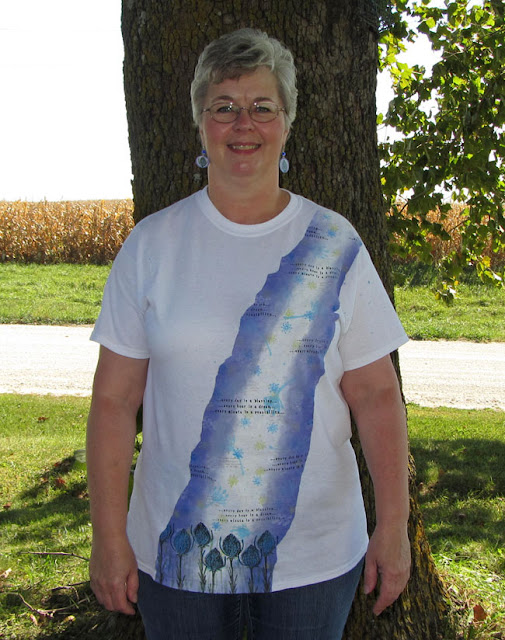 I hope you've enjoyed today's projects and are inspired to make something for this theme of Wearable Art.  If so, please link up to the challenge post because I would love to come see what you've made.

oh Wanda this is fabulous! I adore the tshirt and the earrings are such fun. The way you have the strips going diagonal is inspired, it really draws the eye down. Beautiful blending and stamp choices, and the best bit, seeing you model the finished project.
Thankyou. ~ Darcy

We would love you to join in with challenge #18: Wearable Art If you are inspired by any of our guests who blog with us over the fortnight, then please join in and link up your creativity HERE.

All links go in the draw to win a voucher to spend on products of your choice from the PaperArtsy online store. The Wearable Art link will close 17:00 (London Time) Sunday, Oct 11th and the winner will be announced 2 hours later at 19:00.
Posted by PaperArtsy at 18:00

Love the tshirt, Wanda - a completely unique item and to have matching ear rings too is a great touch.

It looks lovely Wanda and you've used my favourites colour!

Wow wow wow Wanda this is fabulous. I really love the design, and the earring are a great little accompaniment. I think the model looks fab too. Hugs Debs xx

Wahey wanda!! This turned out great! Painting t-shirts was one of the first ever stamping projects I did when I started crafting. I still have one I wear that was the one I wore a lot when pregnant with Courtney ( now 21!!) ~ Leandra

Oh my Wanda, I love these two projects so much! Although you have told us what went wrong it doesn't really look like it! I love how you have got stuck into something new and made it your own. I would really love to wear either of these pieces and I think that is the hallmark of wearable art,

This is fabulous. Love the colours and the way you did it on the diagonal. Thank you for the instructions and it is a technique I will be trying, thanks to your inspiration. Love the earrings to match and what a fabulous original piece of art...just love it! x

amazing make wanda - this is fabulous - this t shirt is what I wanted to do - of course it wouldn't have quite worked out as good! Lol!!! Hugs rachel xx

Wow!! This is marvelous project Wanda! lovely images and colours and pretty pierce too. Love them all!! xx

how awesome! thanks for sharing pictures of all the steps and products you used. great job and the earrings are adorable!

I absolutely love the tshirt it could be worn all the time, great piece fab earrings too xx

This is really cool. I need to get some of that fabric medium stuff. Hugz

Wow! Wanda this is a fabulous fashion item! I love it and the matching earrings are just inspired! Really lovely pic of you wearing your creation too! Great work! xx

Super idea, super made and it looks super on you!

Wow! The tshirt looks great & the earrings are gorgeous.