"Hi everyone! Keren back again after a slight blip in access to my mojo! I decided to focus on creating my own embellishments- I guess you could call it micro-crafting! I've gone for lots of different elements and have been experimenting. Not entirely successfully (as I'll show you"!) 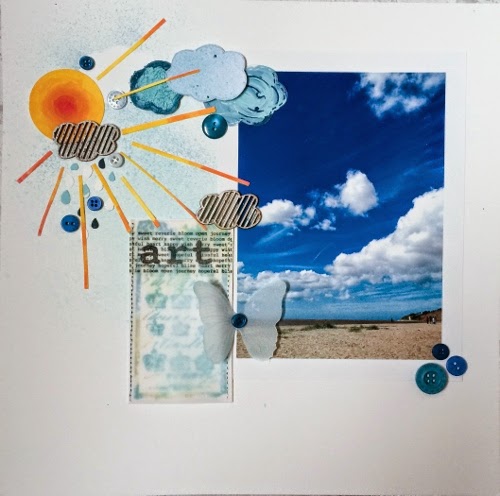 I went for a layout this time - and my first plan was a series of journalling spots hidden behind doors, hinged with some of the lovely dies. That plan flopped completely.
This scrapbook page is a case of the parts being greater than the sum!!
I've been using lots of old types of supplies and had an idea about paint and shrink plastic,
﻿ 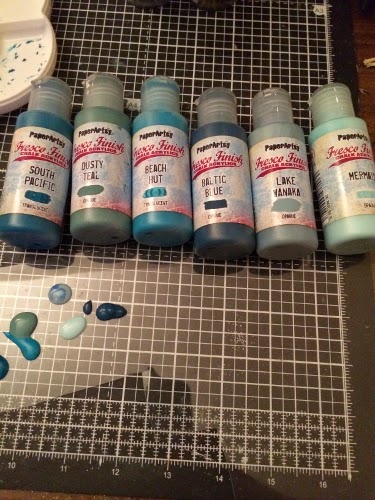 The idea I had was to marble the paint onto the shrink.﻿ 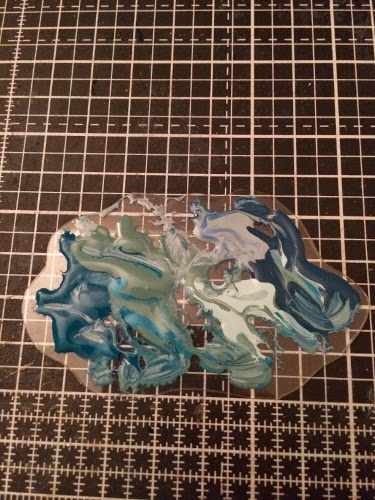 Then I roughly cut around the paint- I was going for a cloud shape! Trying not to get wet paint on my scissors was fun!﻿ 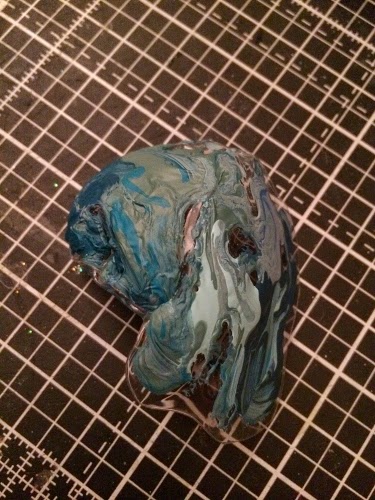 It was NOT a success as you can see- looked a little disgusting in reality. I realised that the amount of paint had seriously hampered the shrink plastic's ability to 'shrink'. So I went for a thinner layer and to let it dry before applying heat. I also applied heat to the non-painted side in an attempt to shrink the plastic first rather than heat the paint.﻿ 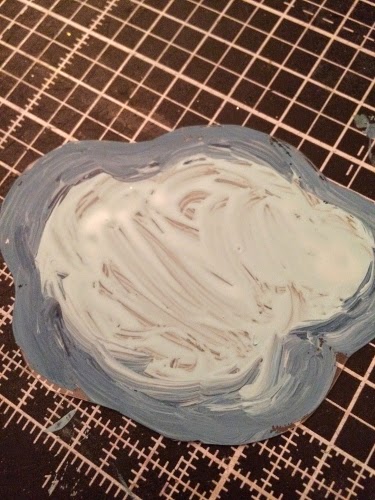 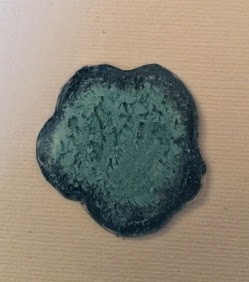 The result was really unexpected- it's hard to see in this photo but was akin to like a semi-precious crystal- and on the opposite side was a really lovely puffy, pleated painty effect. 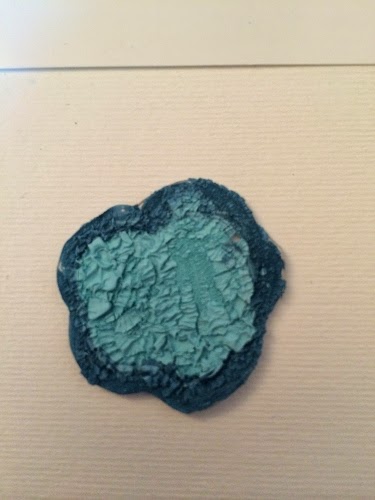 What it did do, was restrict the shrink plastic's ability to shrink evenly- so definitely, abstract shapes would work better- as it was more flower shaped, I thought I'd try and hide it a little. The next thing I wanted to do was have a go at scratching some shapes into a painted acetate piece.﻿ 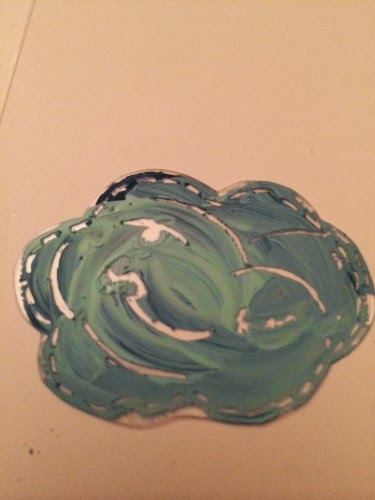 I used a pricking tool to add shapes and a dashed line onto the shape- it was fun scratching it back to the acetate!﻿ 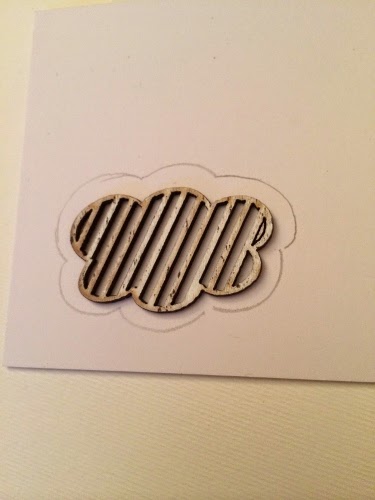 To make my cloud template, I traced around the Prima cloud shapes. It was these shapes along with the photo that had given me the starting point for my layout. ﻿ 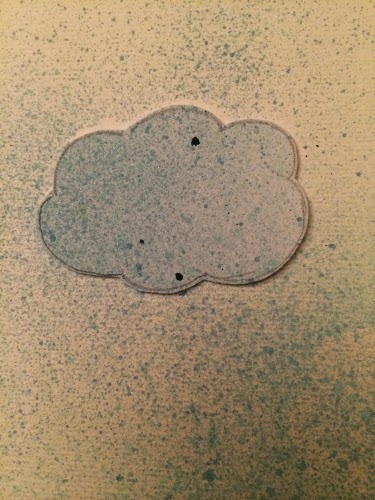 I laid the shape onto the white cardstock background. I simply added a small amount of Mermaid into a spray mister, added water and also a little shimmer glaze. This gave the spray a lovely subtle shimmer. I sprayed over the cloud mask before adding darker blues into the spray along with a little more water and kept moving the mask and spraying. This had the advantage of keeping the spray in one bottle rather than 4!﻿ 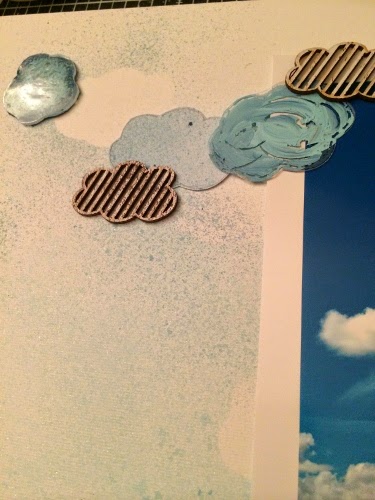 I began layering up the elements onto the page. It still seemed unfinished 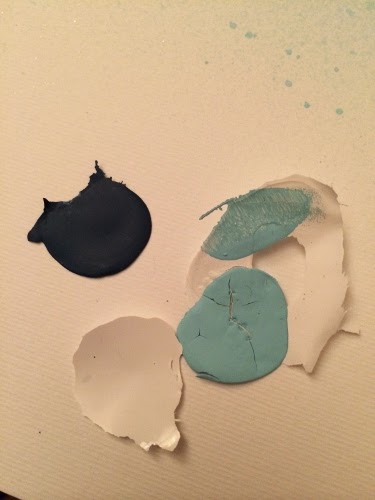 I'd asked a few of you on Twitter about the best way to clean up paint from your paint receptacles! Leandra said in her opinion that Fairy Power spray was the best thing- I've hunted for it all over and still not found it! That left me being particularly lazy one night and not cleaning the tray out. As I prepared for this layout, I began trying to remove the paint. The paint was simply peeling away. The opaque particularly peels away easily. I had these little dried blobs and I decided I wouldn't throw them away but make raindrops out of them. They cut beautifully with scissors and one side has more of a glossy effect. 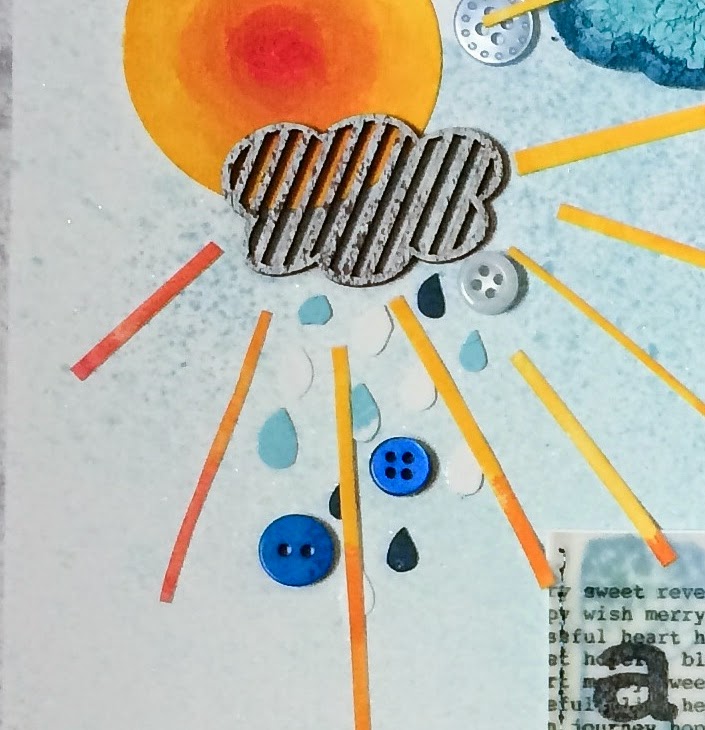 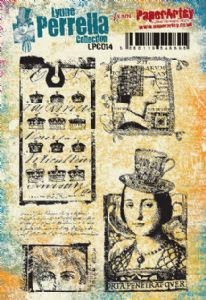 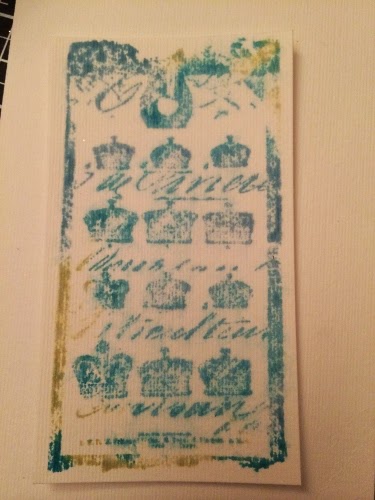 I normally use my favourite stamping surface Smoothy White Stamping Card but have used some heavyweight paper for acrylic paint because I preferred the textured surface. I stamped with Distress Inks and misted them before I stamped, so the image was a lot softer. 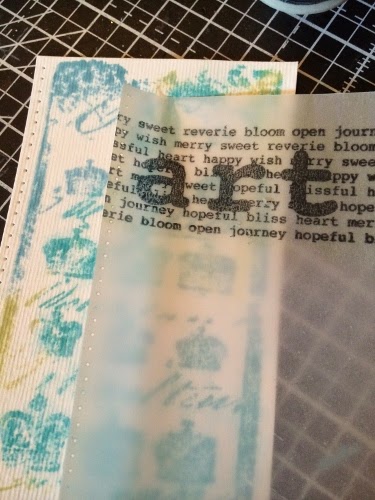 I wanted to soften the image further so it didn't become the main focus of the layout and detract so much from the photo. So I simply stamped the word definition from ESN01 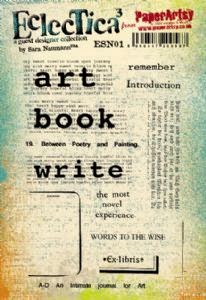 Wake up...I'm nearly done! I then attached the vellum overlay onto the cut out tag by sewing with some metallic thread. I added a stamp butterfly from this set. 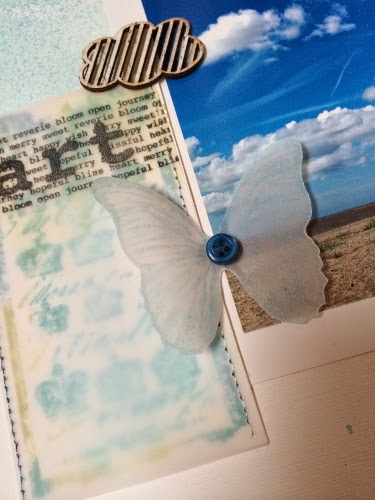 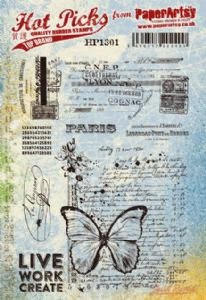 Then, the page looked unfinished- so I simply added some Tango, London Bus and Yellow Submarine onto some cardstock, created a sun along with some 'rays' to complete the page. If you're still with me, you deserve a crafty medal! It didn't turn out how I was hoping but I learnt a ton in the process!

Tomorrow I'm back with a card creating my another embellishment .. and the post will be shorter.. (promise)!

Leandra Says: Wow I really love how the vellum softens the stamped image, and Fairy Power Spray is usually near the oven cleaning stuff, not the other fairy washing up products, its a de-greaser, so its for cleaning up your roasting trays etc! Good luck finding it!

Gillian Says:Glad you stuck with it Keren, I like the way you have mimicked the clouds from the original photo but created some texture, the softness of the stamping and transparency along with the hot rays of the sun. Another fab clean and simple layout.


If you would like to join in this week's challenge and play along with Keren's techniques, then do link up your creativity here, and go in the draw to win some PA stamps of your choice! You need to link your entry by 17:00, Sunday July 13th 2014.

Very inventive, and I love the photo, it makes for a very striking layout.

Love it keren! You make me smile as I love a bit of experimenting! It has turned out great and very original so it was worth it. And we get a bit of Leandra as domestic goddess thrown in too!

If I could do this when my mojo went astray, I'd be sitting pretty.Lovely LO.

Nice of you to carry out experiments so we don't have to! Love the vellum on your beautiful layout.

Love the use of paint skins, I have lots of them stored between parchment papers, just waiting to be used.

Really? I'm glad. I thought you might think I was a little mad. I would like to play more with them. Such an unusual medium to create with!

Your Paper Artsy guest design is FABULOUS!! Love the artistic approach and tutorial about your shrink plastic "clouds"! Beautiful project!

Great post Keren, full of fab ideas & the finished layout is lovely. By the way, if you use just translucent Frescos on shrink plastic, it will shrink 99% perfectly. There will be less texture on the reverse, but sometimes you want a smoother finish.

Very effective and you have used some really unusual embellishments !!

Ooh- thanks for that! I will give the translucents a go x