"I’ve always thought acetate makes an interesting substrate to work on and adds a different dimension to your card".


I started this one by choosing  two images from the ID07 Vintage Ink and the Dog Plate and then rummaging through my stash of inky backgrounds. 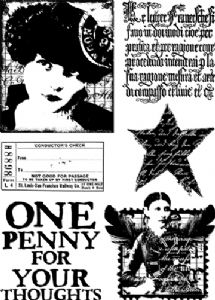 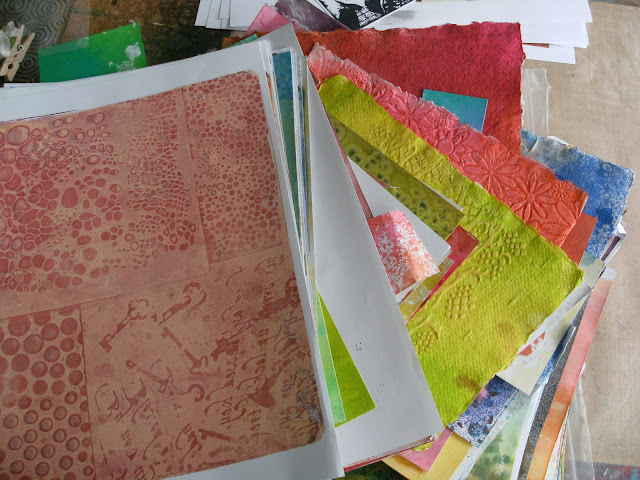 Once I’d chosen a colour I stamped up my main image.  Be aware when using a face stamp to try and position it on a part of your chosen paper that will compliment the face (unless you particularly want it to look strange).  For example not like this one where she has a white spot on her nose. 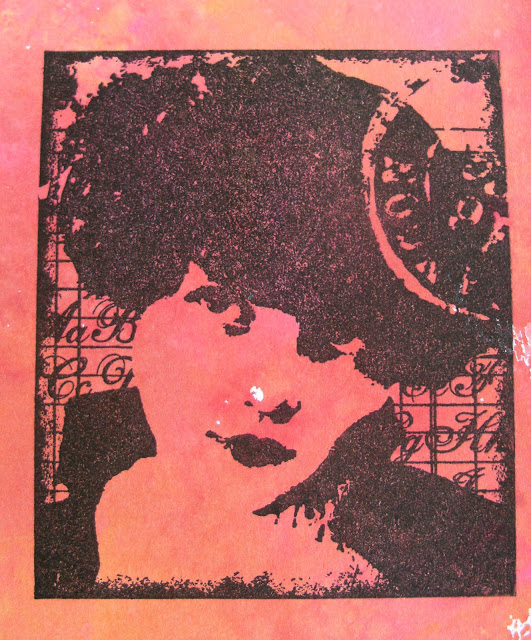 I added some white pen to her eyes to highlight them. I distressed the edge of the image.  If you don’t have a specific tool for this you can use the sharp edge of a blade of scissors and run it along the edge of your card (with care!)  The image was then layered up with some black card and then another piece of my chosen background card.  I thought this piece looked a bit empty so stamped round the edge with Distress Marigold and Mini 56. 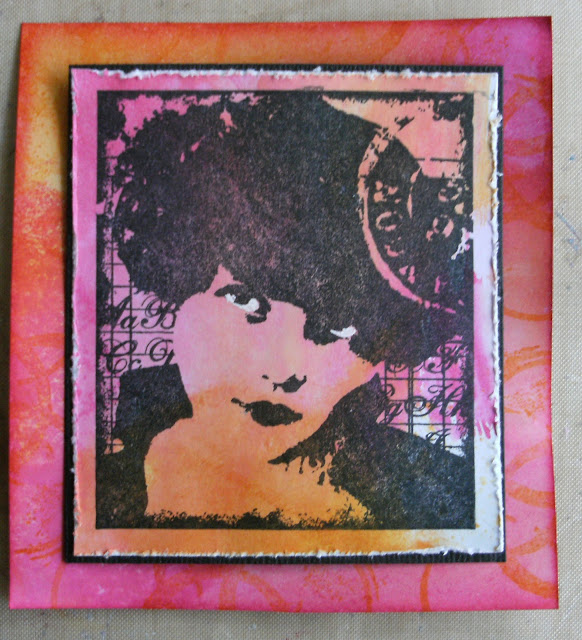 Still not quite right so then I stamped with Picked Raspberry and Mini 62. 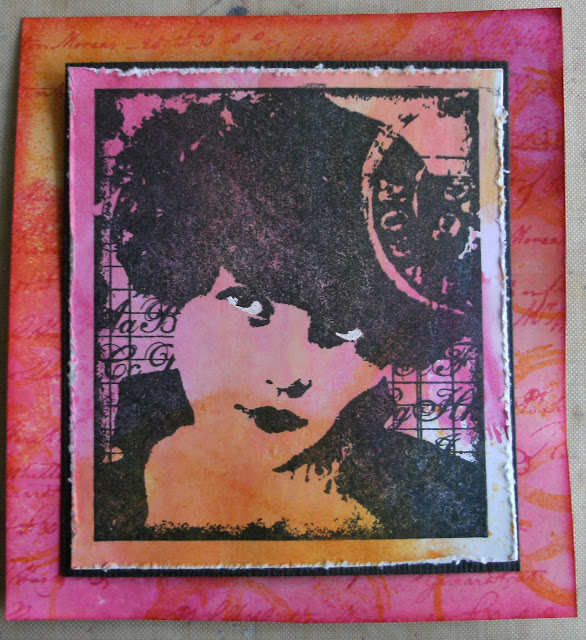 I’ve recently seen someone stamp up an acetate flower so thought I’d have a go  and started by cutting out  the Tim Holtz Alterations Tattered Florals Die. 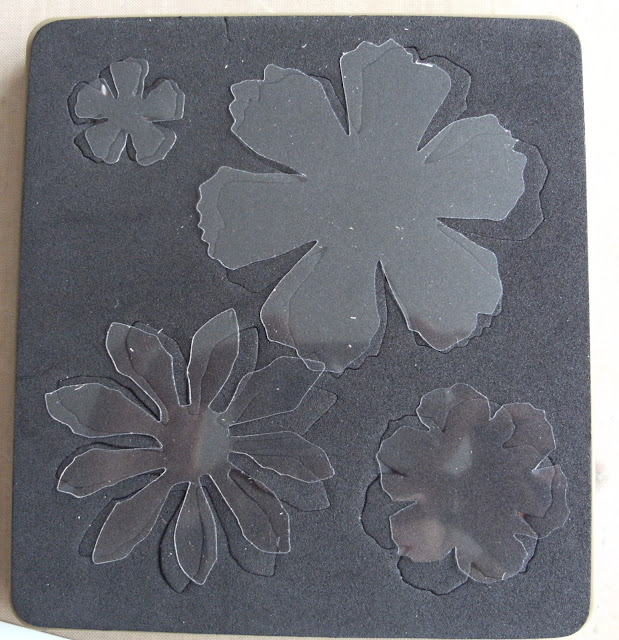 Didn’t want a flat flower so decided to try and shape it with the heat gun.  Using the centre of each cut die, I tried to find a circular shape to match and laid the acetate on top. 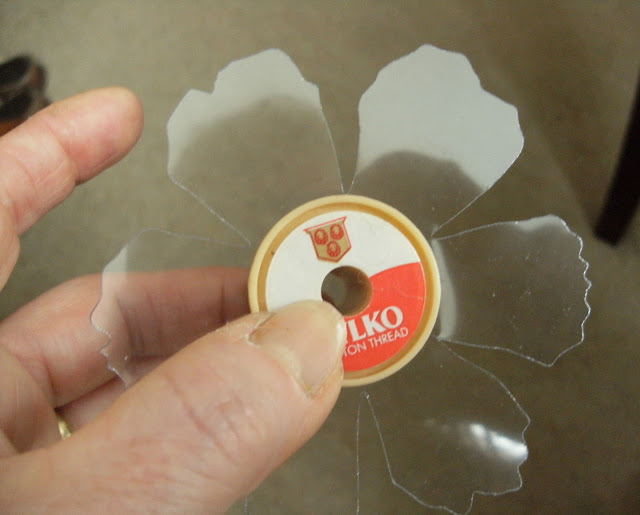 I then gave it a blast of hot air from my heat gun and the petals just collapsed round the centre of the spool. 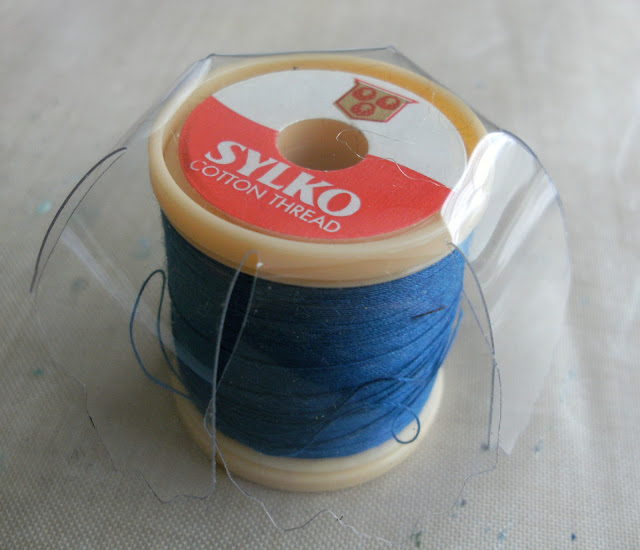 With some trial and error, I heated the different petals to the shape I wanted.  Obviously BE CAREFUL here as the acetate will be very hot.  If the shape isn’t right for you the first time, it seems you can reheat as many times as you like until your desired shape.  I also decided that I didn’t want a clear flower so coloured the acetate with alcohol inks. 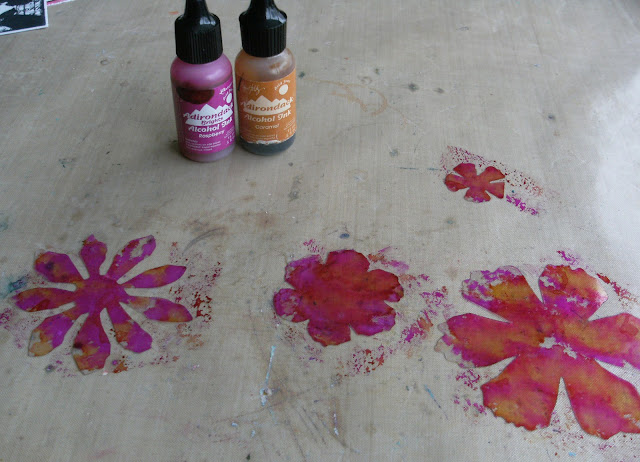 Time to assemble the flower. I found the layers didn’t like being stuck with glue (probably the alcohol ink) and used sticky glue dots.  Some bling in the centre and the flower was finished. 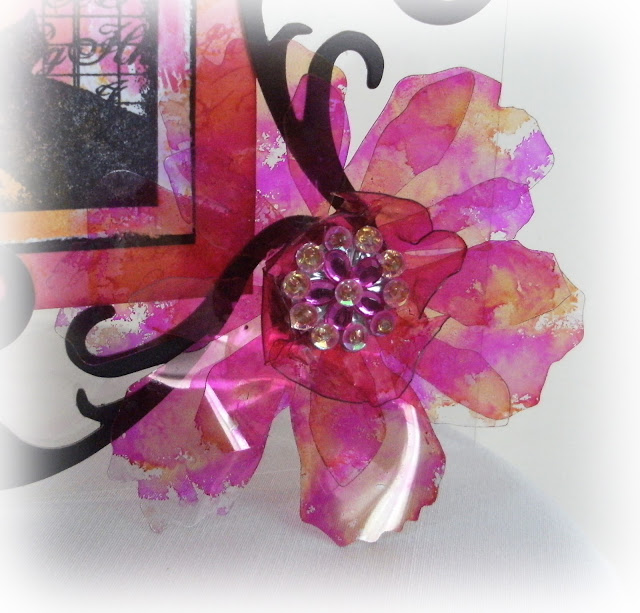 For the sentiment on the inside of the card I used the “One Penny” stamp and cut it out with a die for a neat finish.  The first time I used the stamp I noticed it was leaving marks on my card because there was quite a lot of extra rubber round the edge of the stamp. See the mark above the letter  “T”. 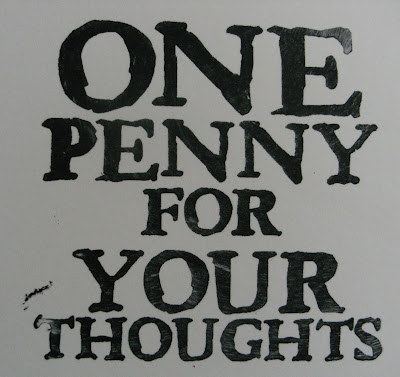 If this happens to you  there’s nothing to stop you getting a sharp pair of scissors and trimming more closely to your image/words. 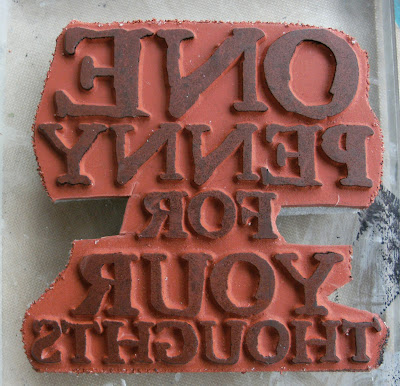 Before I put a card or any piece of work together, I always assemble it roughly until I like the positioning of my elements.  Sometimes I take a photograph of it and look at it on the computer as it’s easier to be more objective.  I decided it needed some more elements and cut a couple of Tim Holtz Alterations Elegant Flourishes.

When using acetate,  it’s also wise to have a think about the fact that everything will be seen on the wrong side too . I always back the inside front of any card with a piece of white card to hide any glue or sticky tape.  If you are going to write a sentiment on the inside of your card you also have to think about where you are going to position the piece of card on which to write the sentiment. I do not want this to detract from my work on the front of the card by being visible.  As I was using the “One Penny” sentiment on the inside of the card, I put sticky take on the back of the image and then placed it face down on the centre of the inside front image. 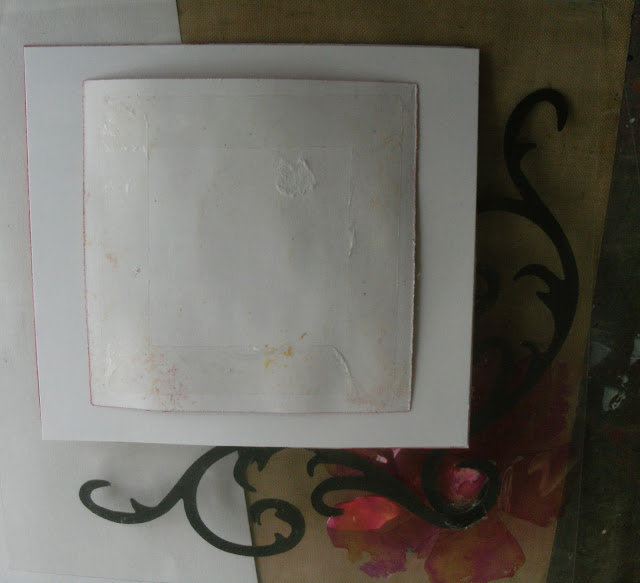 I then took the back of the card to the sticky tape to make sure it stuck in exactly the right place. 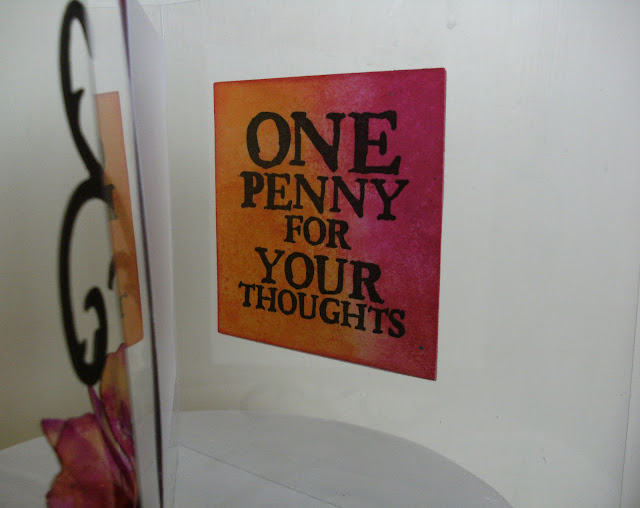 A final adjustment of the flourishes to position them to my liking. Again I used a couple of sticky glue dots to affix these. 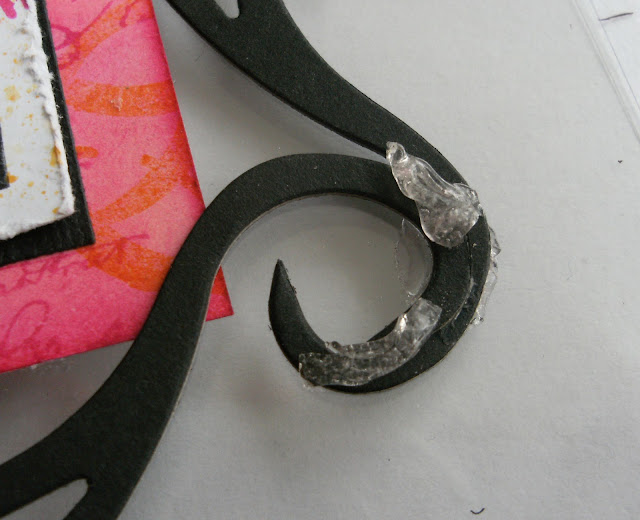 And finally, the finished card. 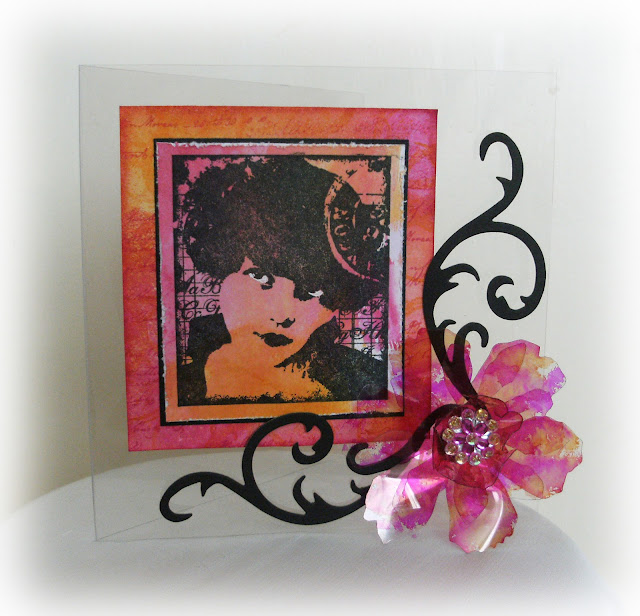 Join me again on Wednesday evening when I share my final project of this week.

Leandra Says: Ohhhhh looks beautiful! Pink and orange lurve coming from me to you!!! And the acetate layers are so stunning!

Gillian Says: I've always admired your acetate cards Carol, this is another stunner. The acetate flowers look beautiful.
Posted by Gillian .... at 18:00

Email ThisBlogThis!Share to TwitterShare to FacebookShare to Pinterest
Labels: Ink and the Dog, treasure gold

This looks fab Carol, love the zingy pink and orange! Might have more success with this than the bracelet, lol!!

Love this one, gotta have a go!!

So pretty! Love the colours & the flower & flourishes are fab.

Fabulous colour combination and your card is totally beautiful.

wow carol this is gorgeous...need to finish my bracelet tonight and will definitely have a go at this..beautiful!!

Ooooooooooh one I might have a chance at doing!!! Lol

Love this project! I need to make a card , so I'm definitely trying this one! Julie Ann xx

Lovely colours, interesting techniques, may need to have a go at this one.

Oh will have to have a go at that flower.. Love your card great choices for all your layers..
Sandy :)

The acetate is so cool as an element in this - fabulous!
Alison x

Absolutely wonderful! I'm back from my holiday in Spain, and ready to create :)

Gorgeous!! What a result!!