I have had an utterly fabulous and totally chillaxed week so far! In fact make that almost 2 weeks.Last week we got caught up getting the back log of bits and bobs done by Friday after ArtsyCrafts the weekend before. So that meant with nothing pressing on the usually looooong 'to do' list....the weekend was mine!! 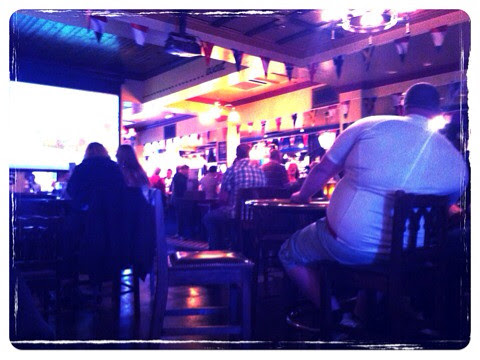 Saturday was spent mostly watching 3 international games of rugby-and they were amazing! 2 at home (watching and ironing), and the latter, late afternoon I watched in the local Irish pub with Mr PA. We then dropped into a Turkish restaurant in Brentwood, and had a nice bite to eat before heading home. Fab day! 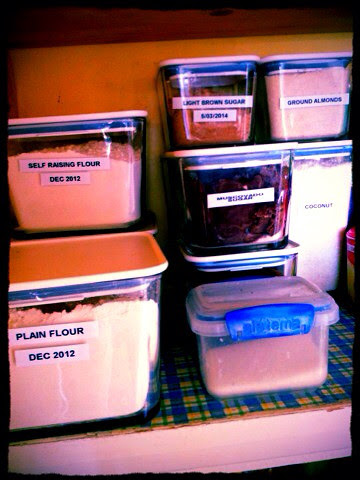 Sunday, of course was Father's Day, so we did the cooked breakfast thing, and then somehow, I managed to get my 3 teen girls to sort out the pantry zones. Yes, no bribery, no payment, just an announcement from me that their time was required to sort my cupboards. I duly delegated, and then went off to clean the house. Courtney was armed with one of those labelling gizmos and bam! They were off, even Mr PA and Hugo emptied, defrosted and re-filled the freezer!!! I probably could have gone and had alie down and no-one would have noticed!!! Noooooo....of course I didn't...... but the net result is now everything has a place and a name! I think Morelos than I intended went in the bin bags than stayed on the shelves, but there were so many badly out of date items that needed hiffing, and I wasn't doing it so who cares!!!!! We topped that effort off with a 3 bird roast for the pa-bear's day dinner. Brilliant weekend, and boy it feels so good to be organised. I have been wanting to sort that stuff out for about 6 years!!! 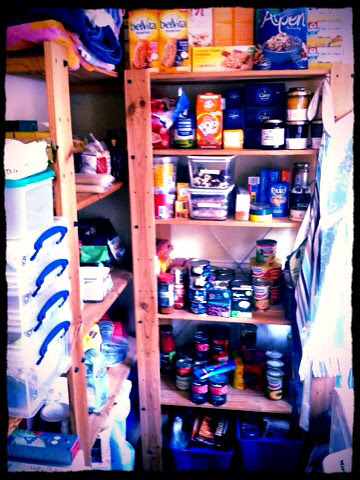 Monday I went into London with Miss almost-18. She has been invited to go to Marbella with a friend's family for a week or 2 this summer, and so she has been working to save up for some time. Of course we only realised last week her passport expired on Friday, and lucky for her, she got a cancellation appointment at the passport renewal office for Monday morning. So off we went bright and early to be there by 7.45!!! Yes you read that right. So after dropping off the paperwork, we went to Bill's near Covent garden for a lovely breakfast, then we wandered around the new Gilly Hicks/Hollister, where she managed to find (of course) a pricey bikini or 2 for Marbs. {All she needs is the oompa loompa fake tan from Amy Childs salon up the road, some Scottie dog eyelashes and blinded up nails, and she will look the part no doubt} After all, she pretty much is a proper Essex girl these days! (rolls eyes) So Tuesday was spent marvelling at how organised I am.....even got all the final AC stuff sorted with Lin..... Orders, a usual work day.....and i cooked dinner on time for the family. wow! 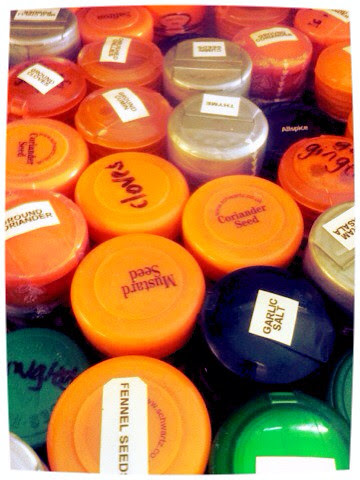 .....fast forward to today. Wednesday. Rubbish day. I was up nice and early, getting the last of the rubbish out, hanging washing out, and even ironing!!! The last time I was this organised I was probably in one of those pregnant nesting phases!!! {NO I AM NOT-Don't even go there!!!} I think the reality is that for the first time in several years I am not tired and struggling to get through a list a mile long!! Usually once one ArtsyCrafts is over we are immediately planning the next one, and we are not having a next one!! (see last blog post) Yay! Space! So I can actually think and plan other stuff! Great feeling!

So, to the point of this post.....WOYWW...... I decided that it was time to put the rest of the ArtsyCrafts bits and bobs away that had been dumped in my studio/storage-shed 10 days ago, and have a bit of a tidy up and stock take at the same time. And *that* she'd is where my desk is!!!

So you want to see the desk...well it started out the day looking like this 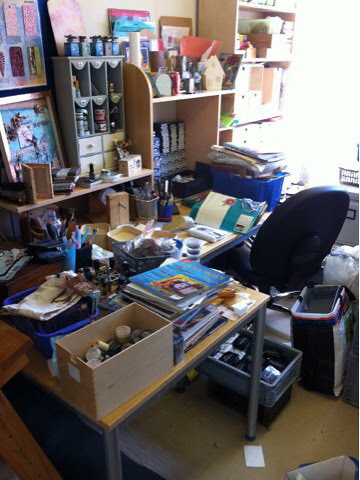 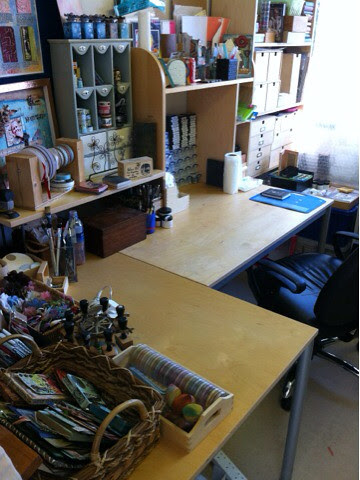 But the best part is I have finally managed to unpack the huge bag of stash I bought when Lin and I shopped at Version Scrap, Paris back in February!! So as you can see, the desk is now ready and waiting for me to play with lots of new stuff. I have a carillon ideas whiz zing about in my head...so I think I need to jot them all down before I forget them and then go and have a play day 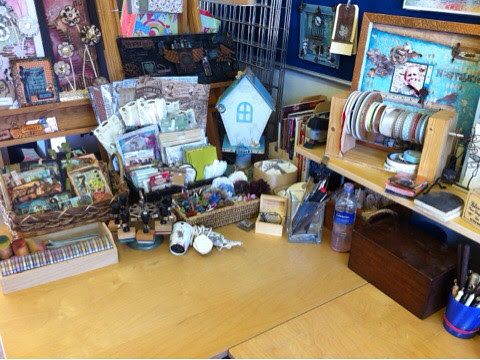 But tonight, to continue with my perfect week, I have cracked open a nice New Zealand Chardonnay, the BBQ is on, the sun is out, and we are having a kiwi BBQ ...so this means an evening relaxing with him cooking, and me watching...and with not a lot on my to do list...for once...I cannot tell you how good this feels!!!!!

Sooooo...... I know I'm a tail end Charlie WOYWWer....... and an erratic one, but if you want to play along, go to julias's place, and let others know what your desk looks like....in an as round-a-bout manner as you wish!

Email ThisBlogThis!Share to TwitterShare to FacebookShare to Pinterest
Labels: WOYWW

What a great post - good to see you having time to join in again! Your girls did you proud with the organising of your store cupboards. Dread to think what's at the back of mine - last time I did it I found some soup cans that had blown... yikes. Your craft desk looks amazing, hope you find time to play with all your new stash - and then share your masterpieces, please!!
Helen, 33.

Sounds like I could enjoy that sort of life permanently !! No chance though !

Please can I borrow your family. I have a seriously disorganised kitchen.

Well done you, enjoy it while it lasts because you'll soon be back to long to do lists and RAIN! Ahhh!
Happy craftin
Rebecca

Love your organised pantry what a great idea to delegate they sure had fun with the labeller. Love your before and after of your desk you have been getting really organised go you. Sandy :)

Isn't it the most wonderful thing to be organized?! I love it so much, too! :) Love the before and after shots of your desk...I did an experiment last week on my desktop to see how long it would take me...it was fun to get tidied up and ready to play some more!
Deeyll #158

how wonderful to have such a lovely busy week and to get all organized, ready for the next bunch of projects! you've done an excellent job of cleaning up! and how nice that your girls helped too! happy WOYWW!
blessings and hugs from #15
peggy aplSEEDS

...gosh Leandra it's been none stop for you (which is probably normal) loVe the before & after shots of your desk it's amazing how much space is under there!...have a super day thanks for stopping by me...Mel :)
Just bought a set of your Hot Picks & hope to use them in very near future :)

Oh, this sounds like bliss for you but we are going to miss those weekends.
What a lot you achieved (thanks to the family pulling together)and what a transformation to your desk. Looks like a peaceful haven now.
Thanks for sharing and hope we see more blogging now you have a little more time.
Hugs, Neet xx

You've obviously had a good weekend and done lots of organising - and your desk is transformed now. Thanks for sharing. Hope you have a good week. Hazel WOYWW #87 x

wow, clean and organized cupboard and craft desk, new goodies to play with and a glass of wine and a barbque planned, you are living the life! waving hi from the hills of North Carolina :)

Wow! You have been busy busy! The organized cupboards look great. Are you and your family for hire? *LOL* I'm going to attempt to get my kid's rooms organized this summer. Your desk looks ready for action now! Thanks for visiting me and a big happy WOYWW! Warmly, Tracy #105

wow I would call this super dooper organised..it must feel great.I love how organised your craft area is...happy crafting!

Pleased you are getting some time to chill!!

Love the labeled containers - I must see if I can adopt some children to help me!

So glad you're having time to chill, and get organised. Enjoy your extra time, you have so earned it! p.s. when you've had time to "play" can we see the results please?

yesterday i got an email saying they thought i must have the messiest desk in woywwer dom, I was going to send them to you, but you tidied up... boo rah...

i appear in the ranks at 18 as donna louise rodgers but worry not about return visits, I mention it only because sometimes people do want to return visit and they cannot find me.

Excellent tidying, very impressed, and thanks for the birthday wishes, spent the whole day drinking tea, eating malteasers and playing with my new toy...a vagabond :-)
Sophie no.92

now that you are all organised...you are gonna be soooo bored! time to resurrect AC!!!!
joke!! hope you had a good barbie...still peeing down in floodland! chardonnay sounds good!

Sounds like we are both having similar get organised weeks! I would love to join you on a play day one day that sure looks like some good stash!

Thank you for sharing this post, I read from top to bottom and was so interested in the lot. wow what an amazing amount of work achieved, you should be proud, don't you love days like that? they just don't seem to come often enough.

I love the before and after photos of your desk...it was like the magic fairy appeared.
You sound like you've had a great week.
Thanks for sharing ~ Happy WOYWW Neesie #26

Tail end, erratic, whatever - we'll take it! Mazing the pressure that has lifted by way of your AC decision. Gotta do what's best for you, because if it becomes more work and toil than fun, you end up hating it, then it shows. Your shed desk looks mighty fine to me..cleared of stuff..my, even my fingers are itching to sit at and have a play! Enjoy!

nice desk Miss PA, my heart still weeps about AC but to see you actually reaping the benefit of time makes my heart sing . .LOL