Tonight I'd like to share with you a post about using Stampbord tiles to make the roof of a house, and turning a row of birdhouses into a little street!

When I first heard the theme was 'Our House' I was singing in my head the lyrics to the 1980s song by Madness, 'Our House, in the Middle of Our Street'. The song goes on to sing about 'Our Castle and our Keep' which seemed perfect for the Lynne Perrella stamps with their crowns, castles, turrets, and keys, which suggest the idea of a house being a place of sanctuary and safety and security. I had in my mind's eye a row of houses with the one in the middle being the focal point and being peopled with faces, so it looked like a lively, homely place to be. In contrast, the houses either side are pretty but quiet, with nothing to be seen behind the windows except wallpaper. 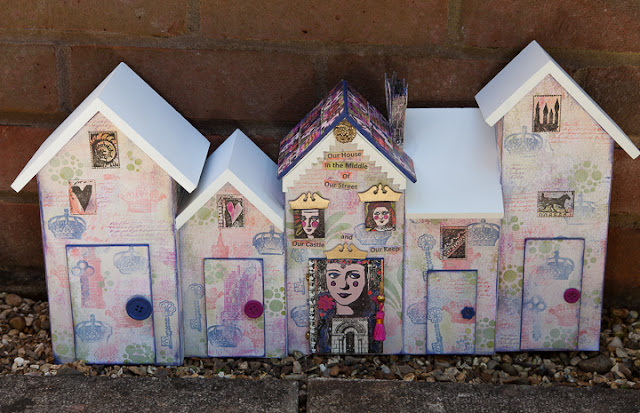 To make my street I bought a row of wooden birdhouses from Dunelm and pulled out the perches! 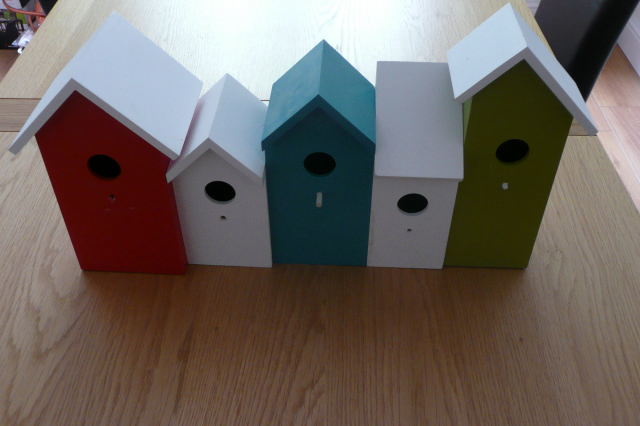 Step One: The front and sides are going to be covered with cardstock, to cover up the hole. I brayered several sheets with Zucchini, Coral, Bougainvillea, and Purple Rain Fresco Finish Paint and then knocked back with Chalk. 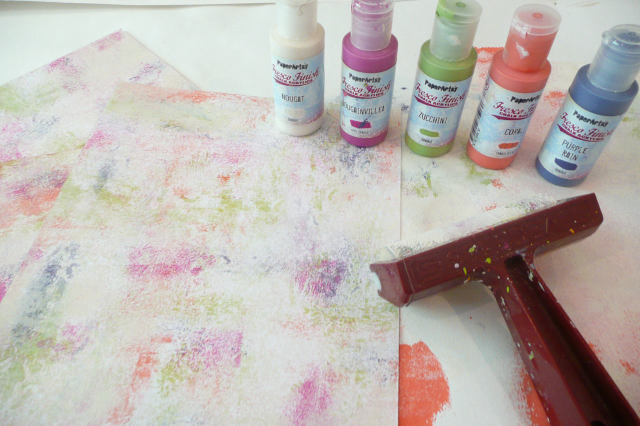 Step Two: I then cut out the pieces of cardstock to fit the front and sides of the houses and built up layers of stamping using a selection of Lynne Perrella Collection stamps and the same colours of Fresco paint. I used the crown from LPC007, the text from LPC014, the castles including the one from the top of the lady's head from LPC006, and the crown from LPC003. I then used some Zucchini and a stencil brush through Lin Brown 001 and then for the piece of cardstock which is going to be used for the focal point house, I did the same using the flower stencil which I felt looked like a fleur de lys from Lin Brown 025. I gave everything a watery wash of Snowflake to tone it down a bit. I then edged each piece with Purple Rain on a piece of cut n dry foam to differentiate the houses from each other when the pieces are glued to the row. 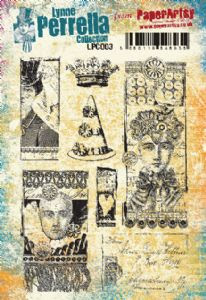 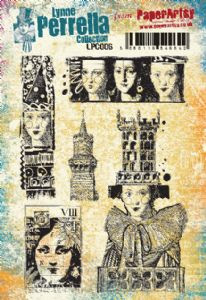 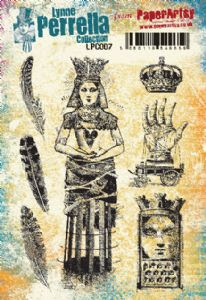 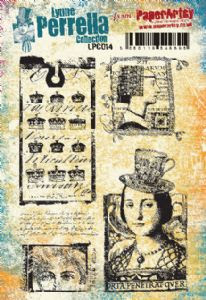 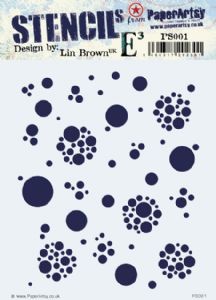 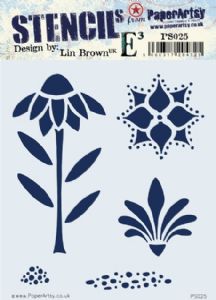 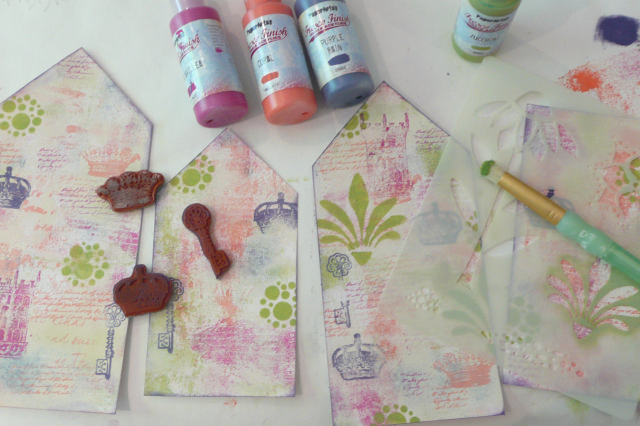 Step Three: Using one of the brayered background pieces, I stamped the large collage from LPC030 using Versafine Onyx Black and then embossed with clear embossing powder. I have mentioned here before that this was a tip given to us by Alison Bomber and I have found it invaluable for giving a lovely clear dark image, particularly with the very finely detailed Lynne Perrella images, and it also helps to avoid going over the lines when painting as you can buff it off. I added a little touch of extra colour in places using the same colours as before. 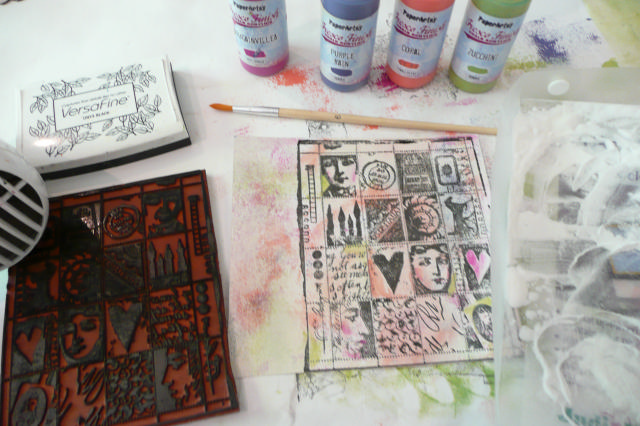 Step Four: Now for the roof tiles! I used one inch stampbord tiles and for the faces I painted them with Blush first, then stamped them in the same way as for the collage but taking the tile to the stamp, and then added Bougainvillea to the cheeks and some touches of the other colours. I wanted it to look almost like a party in the attic, but the design would have looked too busy if I'd just had the faces so I wanted to break it up a little. For the more abstract part of the design I stippled some of the paints onto the tiles with a stencil brush first. With hindsight, the Purple Rain came through the designs a little overpoweringly although it's a lovely colour in itself. I stamped these tiles in the same way as before, using the text, and the crowns collage from LPC014 and the row of houses from LPC028. I then used a Stampbord scratchtool to do a little highlighting on each tile, for instance the whites of eyes. Again with hindsight, it would have been better at this stage if I had sanded the edges of each tile to differentiate them from each other when they were put together, but as you can see in the later photo, I managed to do this quite easily once they were in situ by running the scratchtool along each of the join lines. 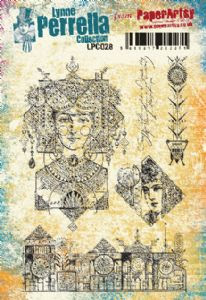 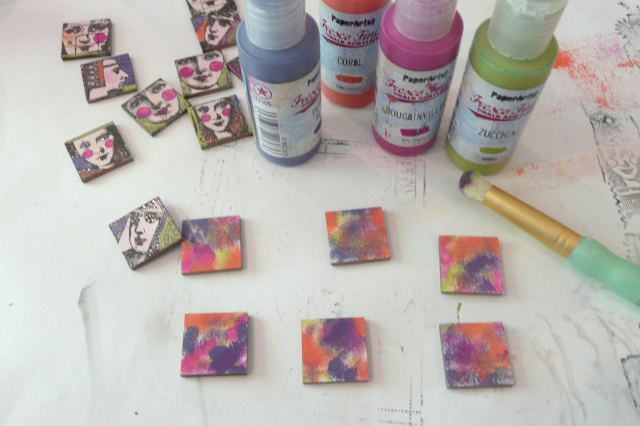 Step Five: In this photo you can see the roof starting to come together! Subsequently I painted the edge along the top and at the front of the tiles with Purple Rain Fresco Paint. In the final photos you can see the turreted chimney and in this picture you can see how I started to make it. I stamped and clear embossed the castle on the top of the lady's head from LPC006 several times. I fussy cut them but left tabs so that I could stick the pieces together. I decided it would be better to have the images glued back to back, for strength and also so you could view them from all angles without the white showing. The chimney was oblong in shape so, for the two remaining pieces, I folded the sides in like a three sided box, and glued them into the pieces already in position. As the roof is sloped, it was all a bit fiddly, matching up the turrets as well! 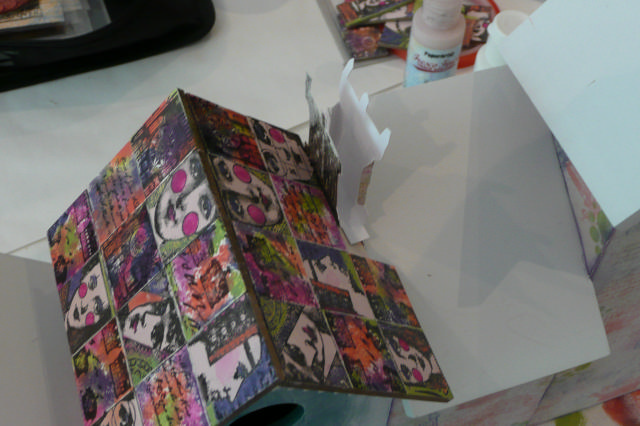 Step 6: I gave the end houses windows cut from the collage sheet prepared earlier, but excluded any with faces as I didn't want these houses to be 'peopled'. I gave them doors made with white/grey board covered with some of the prepared cardstock and buttons painted with the Fresco colours. For the main house I die cut an awning painted with Snowflake with a resin flower painted with the new Fresco Gold. I used the Tim Holtz Pediments die on shrink plastic painted with Gold above the two windows, which are two of the remaining face tiles, from LPC006 and LPC007. The door is an ATC stampbord piece stamped with the lady from LPC010. Her face has been coloured with Blush and some Pearl Glaze and a touch of the other Fresco colours added and a few scratched highlights. I made faux hinges with flattened gold brads and a door knocker with another flattened brad and a pink tassel. I added another gold pediment above the door.

To finish off the project I typed the words, 'Our House, In the Middle of Our Street, Our Castle and Our Keep'. I added a touch of the Fresco paint colours to them and arranged them on the main house. 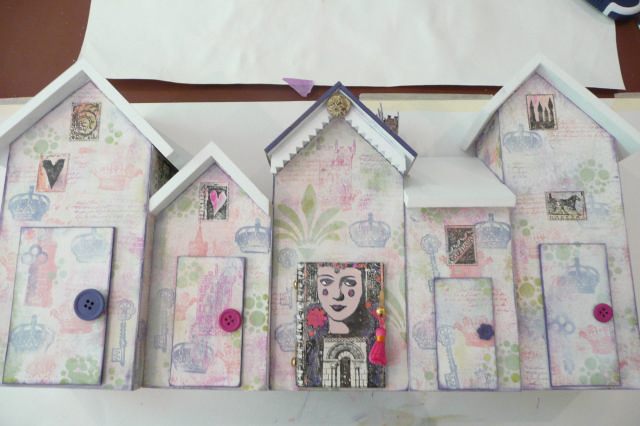 In this close up shot you can see more of the details of the main house, with its rather grandiose occupants ready to party in the attic, with its tiled and turreted roof. 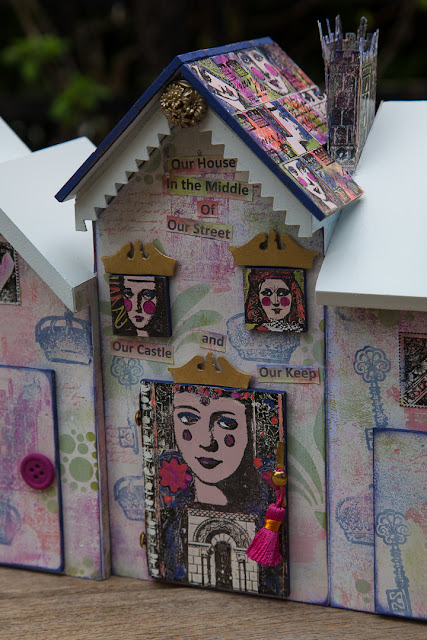 I found it quite tricky making this project, and executing the plan I had in my head and I encountered a few snags along the way. Over all, my favourite part is the roof, so I hope it will encourage you to consider using the one inch stampbord tiles for a house roof if you are making something 3d for the challenge. The other idea I had considered was using the large collage stamp to make my roof tiles, so I think that is what I shall do next! Have fun with the challenge and I will enjoy seeing what you make!

Lucy, Lucy's True Colours, twitter @CraftyLuce
What a great song in the first instance to get your inspiration from ... Love the concept of this project and the shabby chic subtle decor. Love the tiled and turreted roof, Lynne's stamps are the perfect choice exquisite Lucy! ~Gillian

We would love to see how you interpret this House topic by linking what you make to our 2016 Challenge #11: Our House, on this page HERE.

All of our bloggers love to see your twist on their ideas,  particularly if you were inspired directly by their post.

All links go in the draw to win a £50 voucher to spend on products of your choice from the PaperArtsy online store. The Our House link will close 17:00 (London Time) Sunday, June 12th 2016. The winner will be announced 2 hours later at 19:00.
Posted by PaperArtsy at 18:00

I love your street Lucy, and the decoration of them is perfect. Great song, too!

Now I can't get that song out of my head! I shall be singing away all evening and most of tomorrow, I expect. What a lovely project. I adore anything to do with little houses and how beautifully Lynne Perrella's stamps with their turrets and medieval look match up with each house being like a little castle. The colour choices are beautiful and I love the idea of the roof tiles. xx

Wow Lucy ! Love this - so much detail, a fabulous creation x

Oh my goodness I can imagine you would have all kinds of snags executing this project!! Those tiles on the roof look wowza!!! The whole piece is wonderful! I'm glad you managed to pull it all together!!!

Wow Lucy, i can imagine this was really tricky to pull off but I'm glad you did because it's wonderful. I love the roof too, stampbord being a favourite substrate to work on. Love your little street but.........I need to go listen to some other music now to get rid of that blooming song, lol!

Quite tricky... this is an understatement! Which is why I'd never attempt such a feat. But, yes, marvellous piece of art at the end.

Wonderful, Lucy - from song inspiration to finished street, it's a fabulous project for the theme. I love the idea of the LP women coming from castle and keep, and the colours are so pretty too. You can't beat a bit of Madness (though It Must Be Love is my favourite!).
Alison x

Fab project Lucy. The tiled roof really is the cherry on the icing on the cake! Wow! Lx

Amazing project and adore your idea Lucy. Fabulous street and gorgeous the middle of the house.The roof and it's colours are so beautiful that you had used LP stamps. I looked on YouTube because I never heard the song before. That is warm and good song, very matching the theme. xx

Fabulous Lucy , and so effective. I'm getting the house bug too. Hugs Debsxx

Wow, Lucy, looks like you had so much fun with this project. I love everything about it. The roof is amazing and the stamping and brayering are wonderful. Great vision. X x

Wow these are stunning - they must have taken ages to do. Xx

Those roof tiles are my favourite too, this must have taken so long, love it xx

What an amazing project Lucy, love your houses, such fun! Ruth x