2020 has been a pretty challenging year so far. We all have had to cope with an unexpected changes to our lives on a Global scale in a short space of time. Having to adjust so fast, and face such uncertainty has been an  unexpected and challenging strain on our mental health.
In this very moving and thoughtful post, Keren likens the numerous issues arising from the implications of COVID-19 to War and the deep desire for Peace. Not only is her tribute art piece beautiful, but so are the words written so perfectly to express her thoughts.
~ Leandra
Hi everyone, it's Keren Baker with you today, and I'd like to share with you a piece of art based on an initial idea about the wars that are being fought right now, on 3 different levels. Over this period of the past few months, it's been really obvious that there are many conflicts going on; war still being fought in many nations, the 'war' against corona-virus where there have sadly been so many casualties, and also another realm; people's fight with their mental health, which is proved so difficult and painful for many at this time. 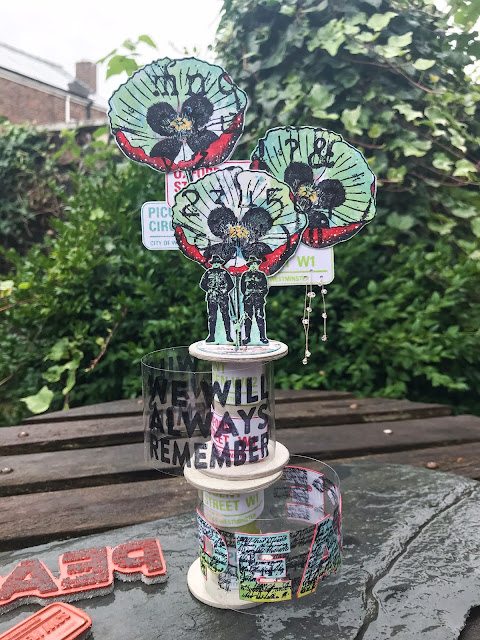 I wanted to create something to remind me of my musings over this time and using words and letters fitted in well with the typography theme. I had an idea about  using a cotton reel and wrapping some quotes or words onto it. Unfortunately, there are no charity shops or antique shops open near me, so I had to leave that idea aside, until I noticed a leftover twine inner roll and thought I might have a go at creating one myself. After cutting it in half, sanding it down and punching some circles from the backing of paper pad, I thought it might work. 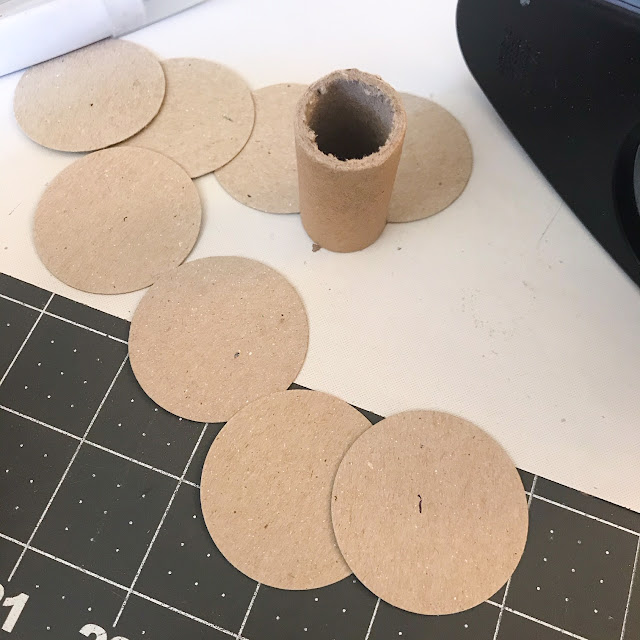 Next, I thought about how to make it look more antique, so after stacking several layers of circles, sanding and using a combination of Fresco Finish Chalk Paints in Chalk, Buff, Stone and Taupe, I ended up with something looking more like an old cotton reel. 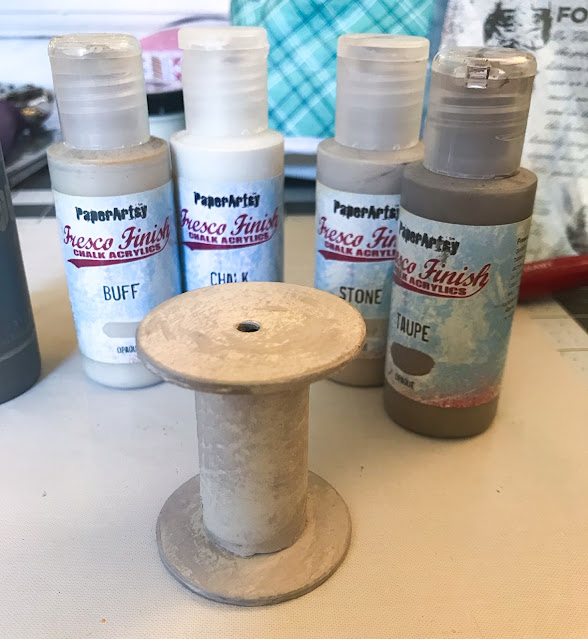 My next idea was have the poppy flowers sticking out of the reel but not to have them as normal poppies as it wasn't a standard representation of war. I had decided to use the Hot Picks set HP1606EZ as there are some lovely images and thoughtful words. 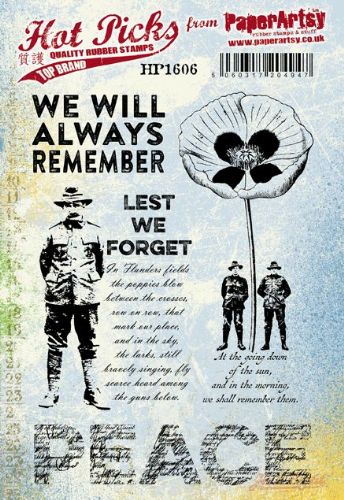 I wanted to have a nod to the poppy, as it is so closely linked with remembrance but thought about having another colour inside and didn't want a flat colour so got my gel plate out. I'd recently got the Drying Retarder from PaperArtsy and if you've never used it before, it's perfect for use with gel plates or if you're in a hot environment where paint dries super quickly. It's easy to use, just a little drop into your pool of paint (but no more than 5% of the total amount) and it means you have more 'play' time before the paint dries on the plate. I used Mermaid, Smurf, Slimed and Snowflake to create my pulls.

I used one of the pulls to stamp my poppies onto, keeping the soldiers on one as I needed them for later. I tried to incorporate the white areas to give the flowers more visual interest. 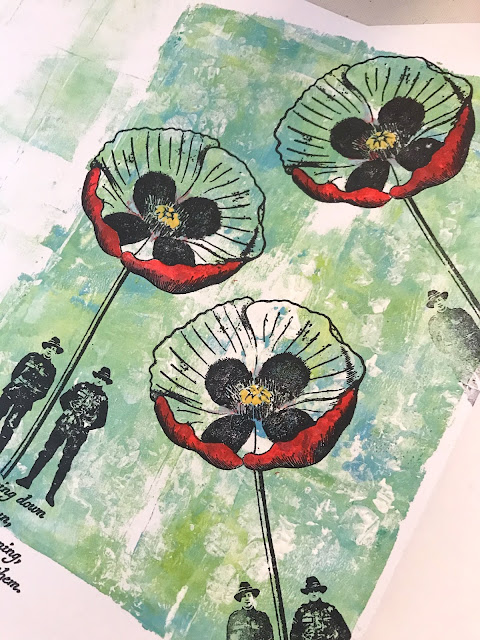 Painting the edges and centres with London Bus and Haystack, gave them more of a floral feeling. I love that London Bus is translucent as it allowed the colours from the gel pull to show through and give 'texture'. Once cut out and arranged together, I stamped the 'peace' onto another pull, that I'd used stencils with. I had wanted to use the PS021 stencil, but thought too many fonts would be distracting, so plumped for PS041 instead. 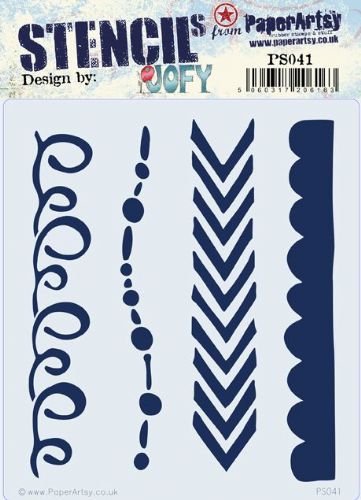 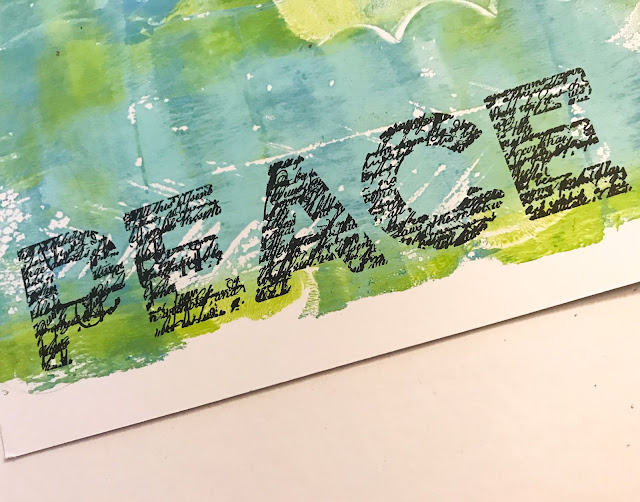 This where my plans went awry. I had wanted to have the peace letters 'hanging' from the flowers but I hadn't planned very well and even with adding some red marker around the edges, there simply wasn't enough contrast. 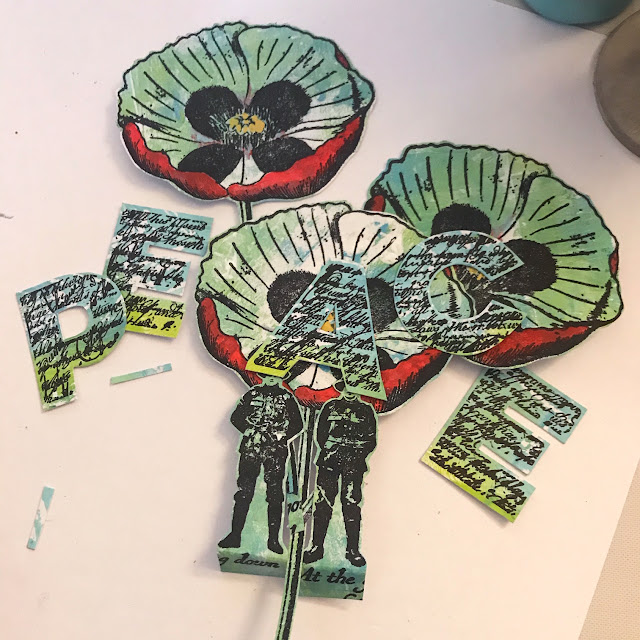 So Plan B was to have the letters around the inside of the cotton reel, but I already wanted to add an acetate collar and that would have obscured the word too much. I knew I needed another cotton reel to add a second layer and not look too 'busy'. So, I made another reel and added slits to the back of the reel cylinder that I could slot the 'collars' into them. I got into stamping next. Increasingly with stamping on acetate, I stamp with the acetate on the top, which often means if the image doesn't come out quite right, I can peel back a little of the acetate, add more Stazon ink and cheat! It's also easy to see the ink spreading evenly onto each part of the image this way too. 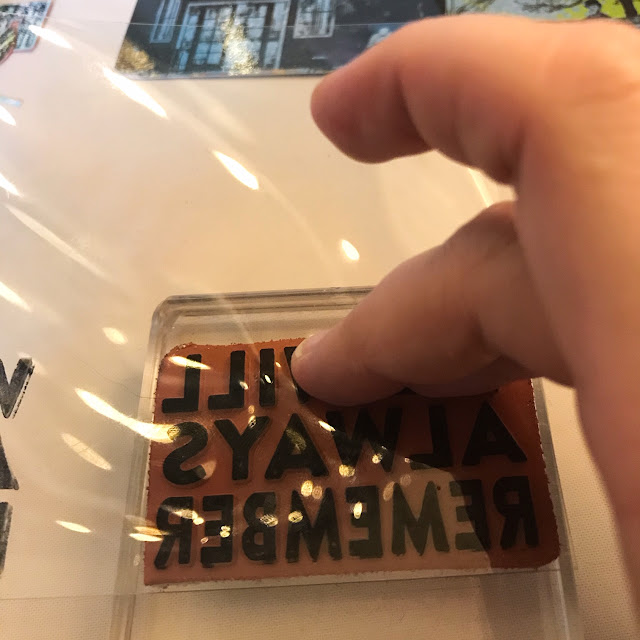 Trimming a little angled tab into the edge of each acetate piece meant it was easy to insert into the reel and stayed put too. 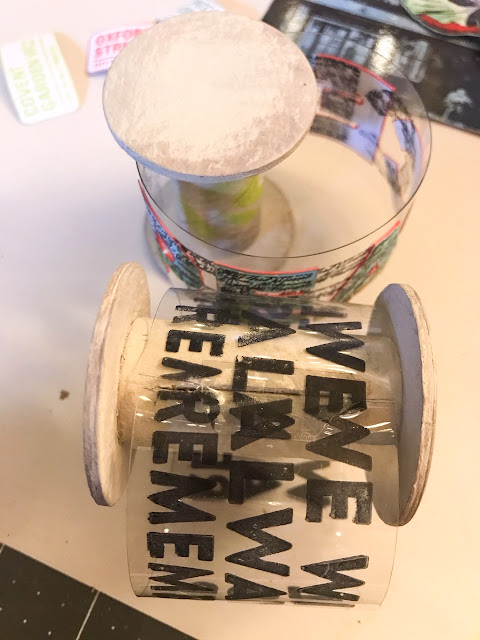 The rest of the make involved just putting it all together. Rather than talk about that, I thought I'd show you some close-ups and explain why I have done what I've done! 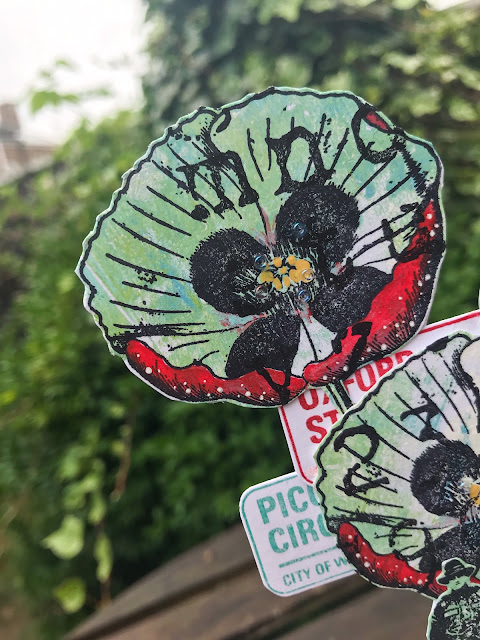 You'll notice here one of the 3 flowers and the street names protruding outwards. Three flowers are for the 3 spheres that wars are being 'fought' in currently. Those street names are from London, which seemed very appropriate as that is where some of heaviest toll on the health service and also enormous loss of life (particularly in the early days of lockdown) occurred. It did fit with the theme, but felt more poignant than just a thematic inclusion. I used the images from  HP1208EZ. The beads in the centre of the flowers I'll explain shortly.

This next photo shows the part representing current global conflict. I tried to get up to date figures, the most recent are from 2019 and show wars spanning the globe: Mexico, Russia, Africa, Iraq, Syria, India/Pakistan, Afghanistan and so many other places. Conflict that we don't always hear about.
I was reading about 2 humanitarian workers who lost their lives in Afghanistan, caught up among fighting in the past few weeks. If you look at the flower, you'll see numbers. I don't know what the total number for loss of life in conflict this year, but it will be a substantial amount. The numbers represent each one, each loved member of a family, killed or taken too soon. The little hanging beads represent falling tears, and so, for each sphere of 'war' we've mentioned, there are bead 'tears' at the centre of each flower. Tears for them, tears for the state of our world, and tears for our own often difficult situations.
The soldiers represent bravery; the indomitable spirit shown by so many in so many ways. Secret bravery required to keep going when anxiety and mental illness threatens to derail life and visible bravery as troops continue to fight for freedom. This also represents hospital staff and other key workers who fight to stem the tide of COVID-19 and deliver care and front line services to those who need it most. 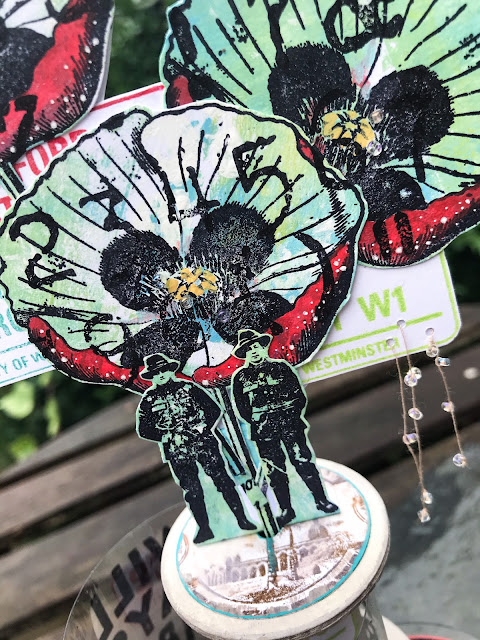 What we're all searching for, is peace. 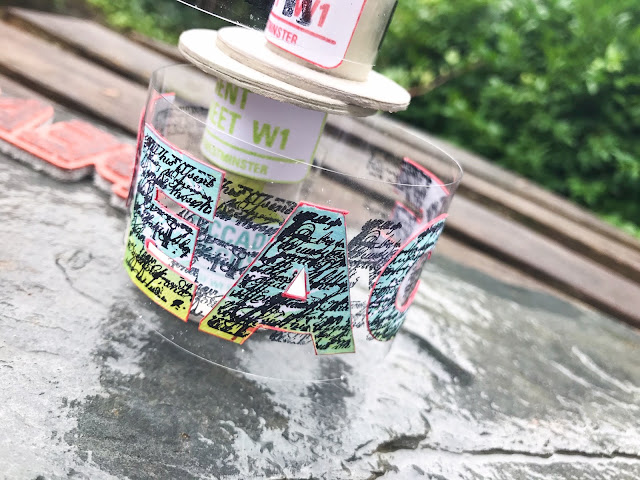 I hope that you are finding ways to cope during this difficult time. As the after-effects of COVID-19 will be felt far into this year, I do hope you can find time to create soul-soothing art and reflect upon the many many good things that we still have and can be grateful for. This piece when I look at it is a reminder of strength, pain, loss and an encouragement to remember and be thankful. 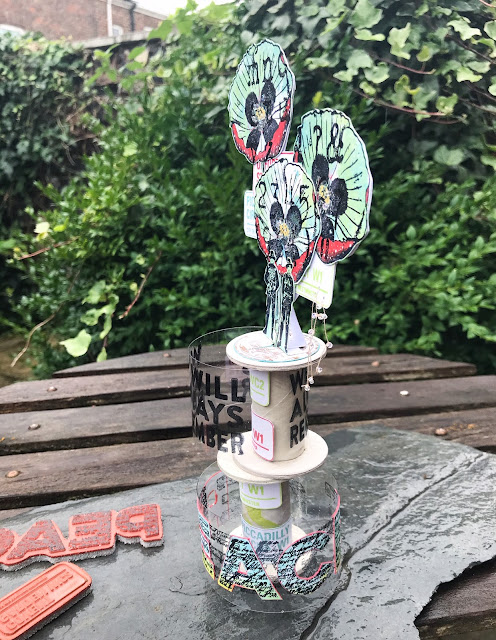 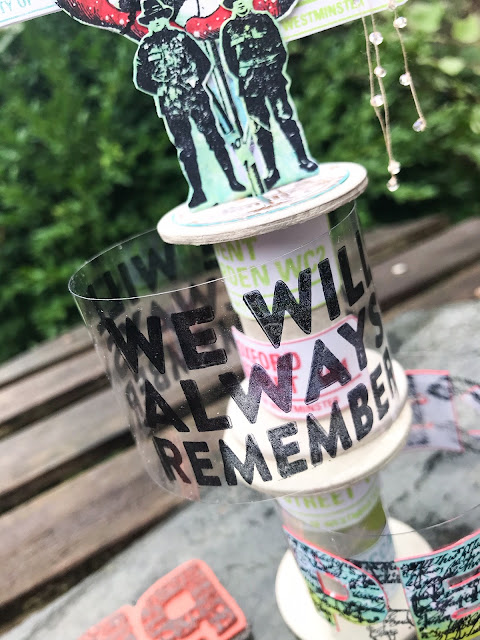 I hope this piece might encourage you create some art significant to the challenging time we have all been a part of. It was good for me to think more deeply about my feelings and thoughts and have a record (albeit in artistic form) of it too.
Hope that wherever you are, you can pause and take time to be grateful.
Keren x